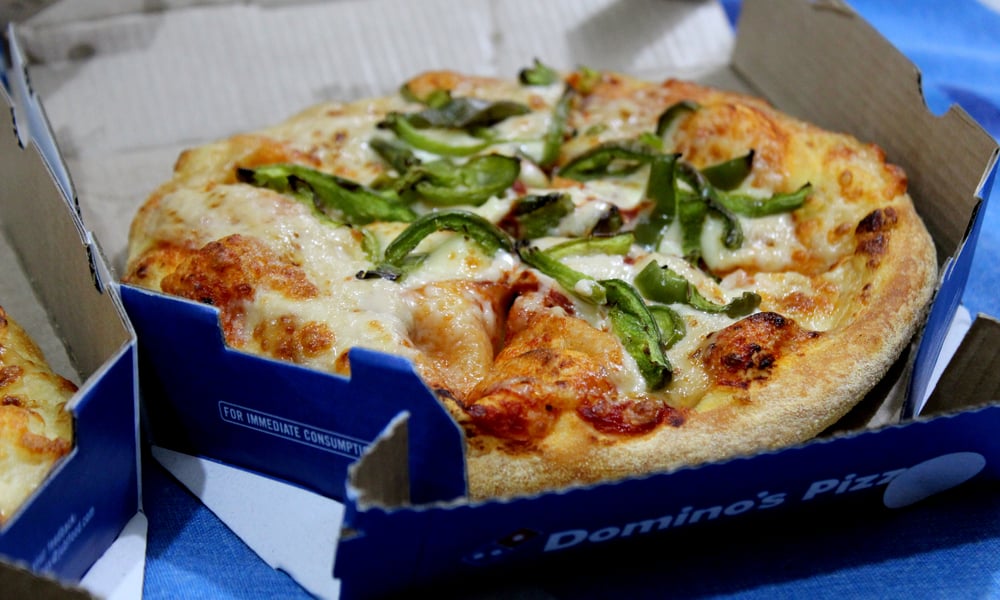 Would you like a sumptuous pizza to grace your plate tonight? Domino’s Pizza has some of the cheapest yet most delicious pizzas you’d find in an American restaurant! 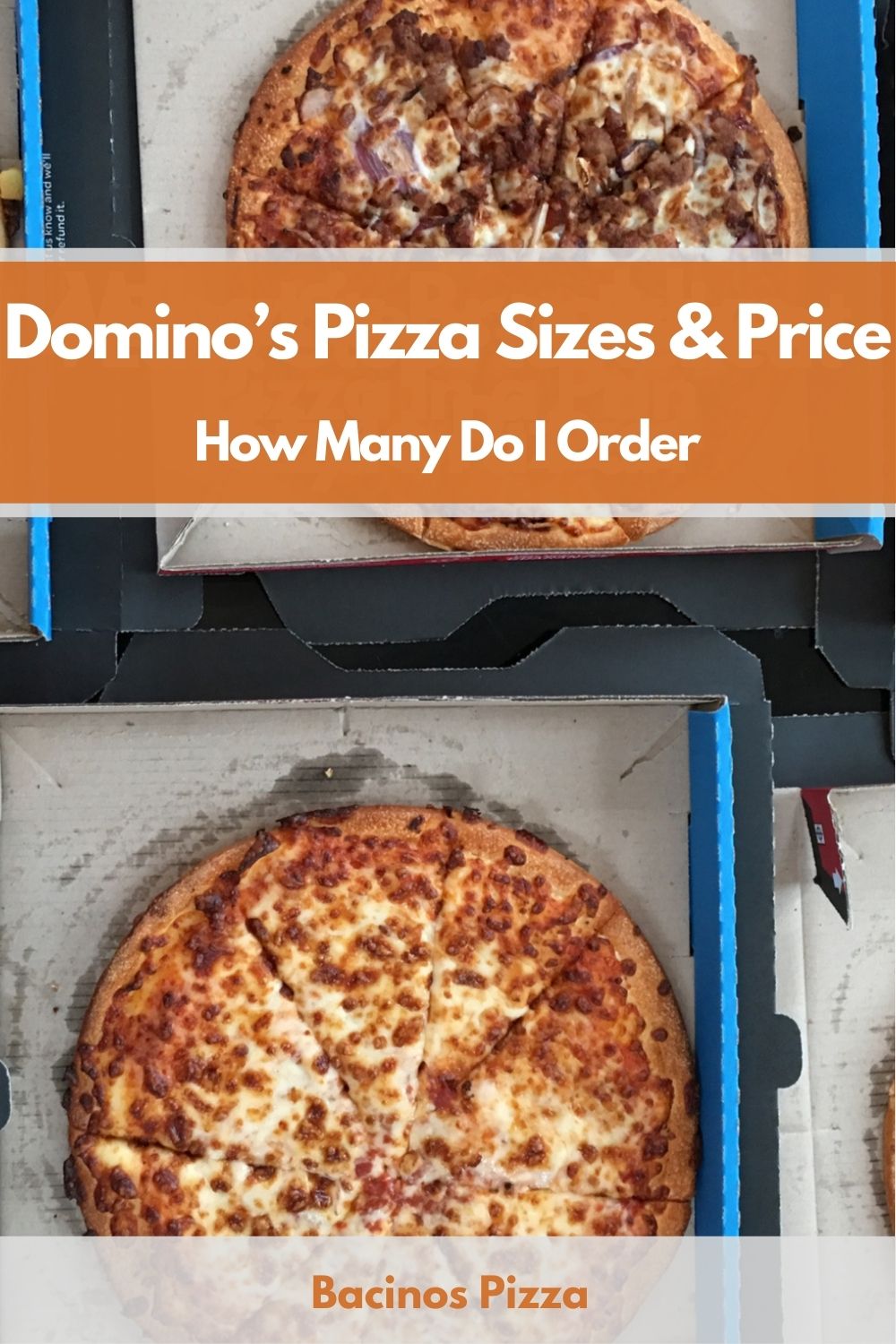 Pizza is becoming one of America’s staple foods- with each person consuming about 30 pounds every year. And, Domino’s is the second most popular pizzeria in the country, only second to Pizza Hut!

But, what is the size of a Domino’s pizza? How much does it cost? And, how many Domino pizzas should you order?

Who is Domino’s Pizza? 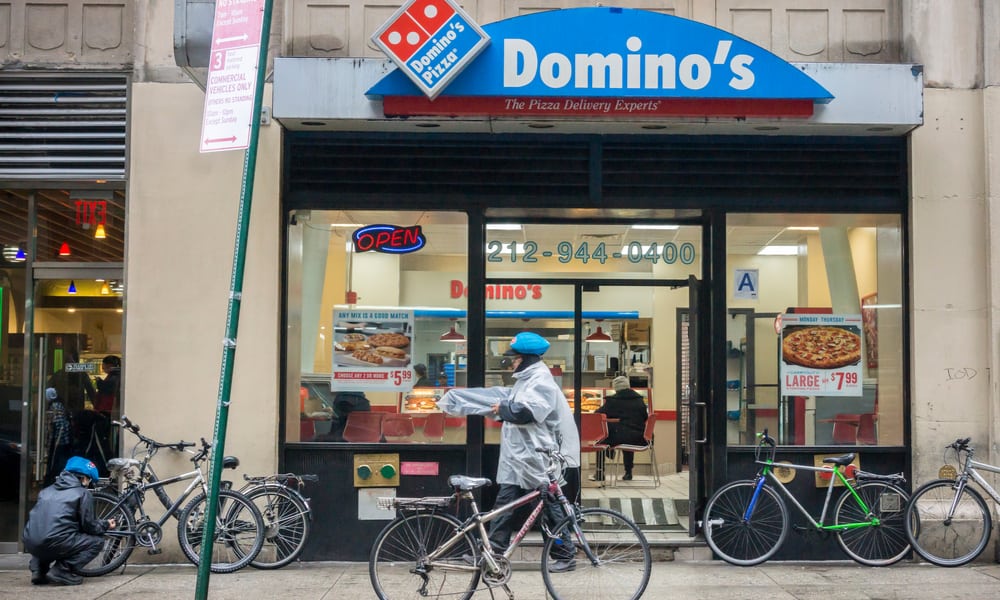 Started in 1960, Domino’s is an international pizza franchise headquartered at Domino Farms Park in Ann Arbor, Michigan. The company has over 16,000+ franchises in over 85 countries around the world.

Tom Monoghan co-founded Domino’s and owned the company until 1998 when Bain Capital, Inc bought it off. Politician Mitt Romney was part of the shareholders of Bain Capital at the time.

However, the Domino’s Pizza, Inc. franchise company is already listed at the stock exchange and trades as DPZ at the New York Exchange.

Each region has its unique Domino’s menu; the US Domino’s menu is different from Asia or Europe. The American menu consists of Italian and Western entrees, side dishes, and drinks.

Domino’s pizzas are the restaurant’s primary focus. Pies have both traditional and custom varieties with different toppings and crust styles. Plus, Domino’s pizzas come in a wide variety of sizes and prices.

Types of Pizza sold at Domino’s

The WA Examiner estimates that there are 34 million ways to make a pizza. So, it takes lots of research to customize your pizza. It’s even more challenging for Domino’s to know the pizza that’s best for you. 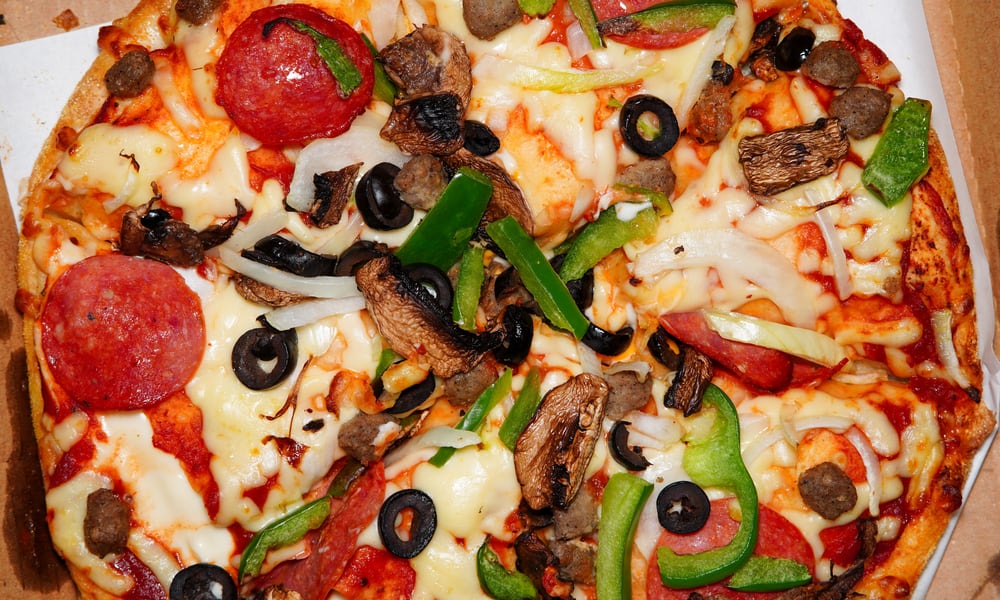 If you just can’t decide the type of pizza you want, just choose the ExtravaganZZa. It’s a combo, with literally every topping you’d want. You’d top it with mushrooms, mozzarella, peppers, black olives, onions, ham, pepperoni, before, and Italian sausage. 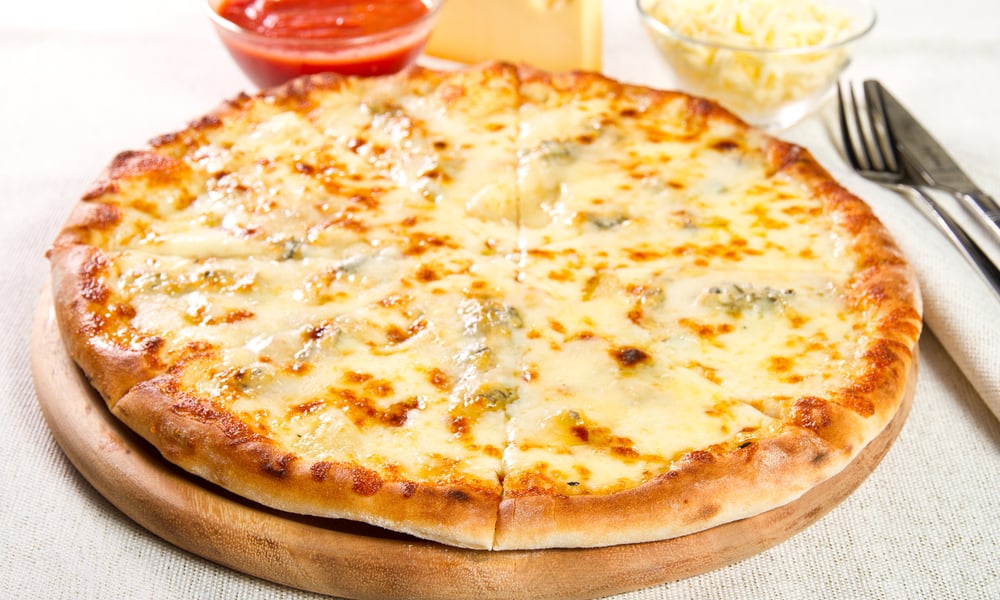 If your guests aren’t fans of ham or pork, you can buy the cheese pizza. Domino’s has about five styles of cheese pizza.

This chart shows the size and prices of the chain’s cheese pizza. 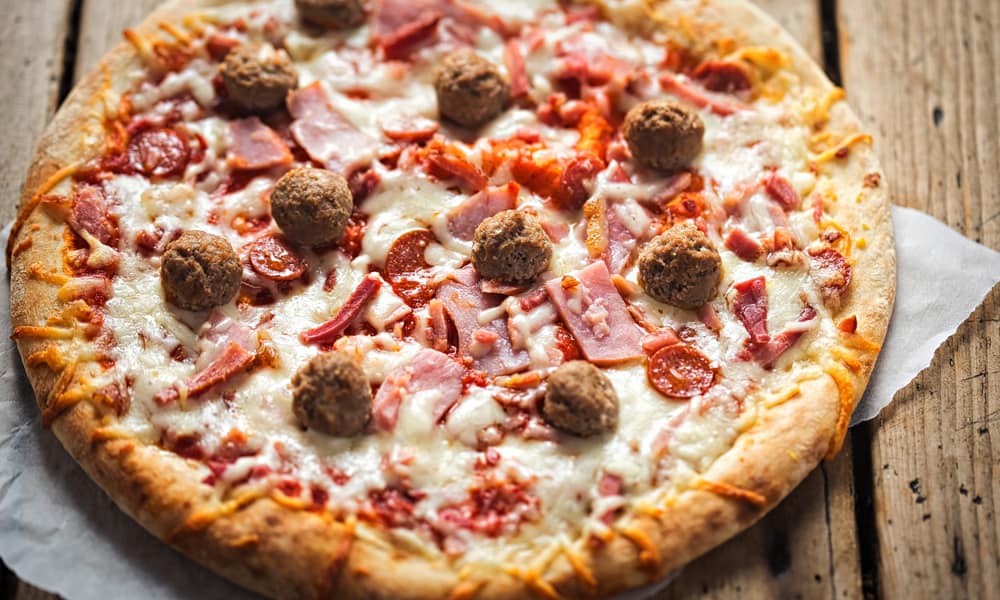 Domino’s feast pizzas have a combination of mozzarella, cheese, veggies, mushroom, and other toppings. The large selection on the menu allows you to order your favorite crust or toppings.

The pie has 100% mozzarella cheese. 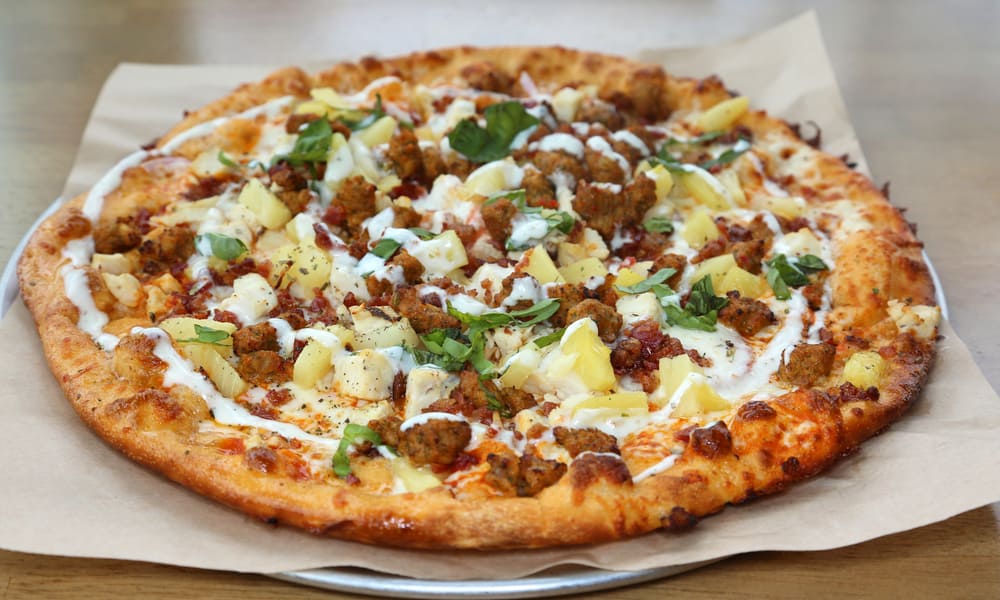 If you love the American legends pizzas inspired by chefs and regions in the US, the specialty pies are your best bet! Domino’s partners with different party organizers to bake the perfect-themed pizza. So, you can get more than 2000 pizza styles from these functions.

How many Domino’s Pizzas do I order? 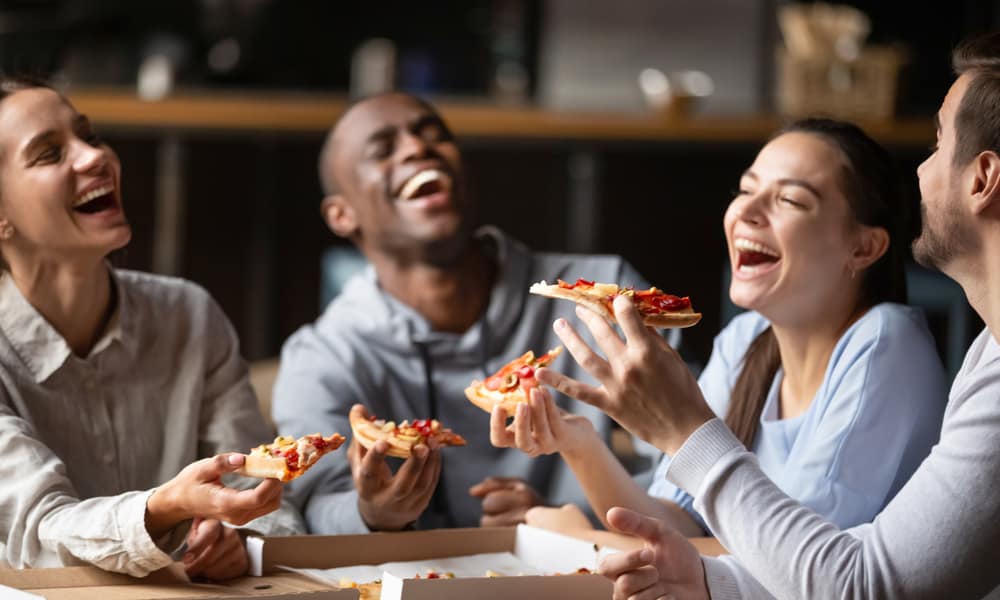 Ordering pizzas can be tricky, especially when you have a large group of guests. Any mistake in the calculation may lead to unhappy faces and unsatisfied guests. And, when you order too much, you will also need a plan to deal with leftovers.

Consider how many guests you have and their appetite. An adult would take three slices and a kid one or two.

If you’re ordering for two, just get one small-sized pizza. If you’re four, a medium or extra-large pizza could just be good. However, if you have a group invited, get large pizzas that work for all guests. Large pizzas are not only cheaper but also more convenient in the long run.

How to Order Domino’s Pizza

Domino’s ordering methods are so simple that the store is rated the most convenient among all pizzerias! You can even command your Alexa to make a delivery arrangement for you!

The traditional walk-in order still works, but you may want to use the more convenient systems. In the United Kingdom, Domino’s even delivers pizza via a drone, right at your doorstep.

Other ways to order Domino’s pizza include:

You can cancel your Domino’s order at any time by calling the store in time. However, the online option isn’t available. If the store is already processing the order, you may not be eligible for a refund. 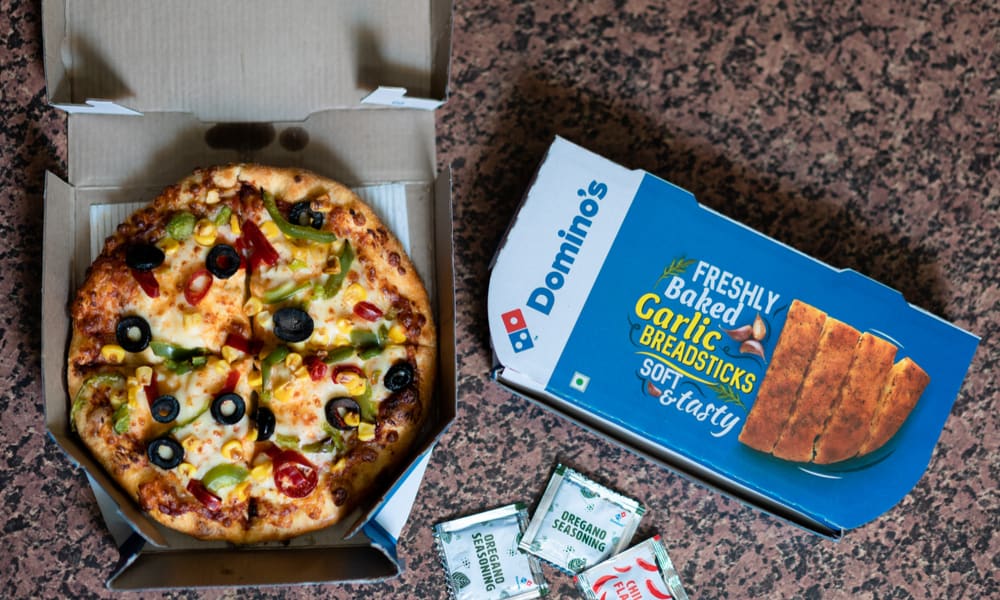 No- you don’t have to spend all your coins and bills on pizza! Instead, you can have a look at our best Domino’s pizza hacks and save lots of cash!

The best way to save cash is to make your pizza at home. But, we all know it never tastes the same. So, ordering from the pizzeria is undoubtedly going to be what you’ll do.

And, because it’s never so easy to part with the $20, we have a few hacks that slice that cost!

Two small pizzas may have the same size as one large one, but; they vary in price, and that’s what you need to fix.

If you do the math for one large versus two smalls, you’ll see you’ve got an additional 1.3 square inches of pizza for about $8 less.

So, by ordering a large Domino’s pizza, you get more, for less!

If you only take a pizza a week, Domino’s has an irresistible offer. On Tuesdays, Domino’s will offer you two pizzas for one!

The two for Tuesday offers caps the price for all pizzas at two for one. So, if you’re buying two large pizzas, you’ll get them at the cost of one!

And yes- all the cost is for the exact same quality of the pizza. It’s nothing like clearance of deadstock. Domino’s is just trying to reach out to you. Check to see what your store offers and make this happen!

Are you a student? Domino’s offers a discount!

If you’re a student and 35% sounds like a good discount, head to Domino’s for a pizza with your ID! The deal will come in handy when you’re planning a pizza party at school.

If you order online and spend over 25, you’re eligible for a 25% Domino’s student discount.

What are Domino’s opening and closing hours?

Domino opens at 10 am, but some locations wait until 10.30 am or 11 am. Then, they close at around midnight in most areas. However, some stores extend to one, two, or three at the night.

And no- Domino’s isn’t open 24/7. Instead, they deliver your pizza until midnight from Sunday to Thursday. On Fridays and Saturdays, they extend the deliveries to 1 am.

How many slices does a Domino’s Pizza have?

While the small pizza has six slices, the medium has eight, and the large has twelve.

How many inches is the Domino’s Pizza in diameter?

The small pizza is about ten inches, the medium is 12 inches, while the large one is about 14-18 inches wide.

Is it profitable to operate a Domino’s pizza store?

Many people want to know how much they’d make if they run a Domino’s. According to Career Bliss, a Domino’s franchise owner earns about $30,000 annually, or about $2500 a month.

But, the actual figure depends on lots of factors. For instance, the profit varies from a joint to another.

Also, the number of staff members in your store and the sum wage and recurrent expenditure will directly influence the profits you make.

So, you may want to be part of the managing team, unless- of course- if you have several stores running.

How many pizzas does Domino’s sell a day?

The total number of pizzas sold at a restaurant varies from one location to another. Some stores have a busier chef than others. The slowest hits about 50-80 orders a day, while the busiest can go to about 200-400.

If you’re applying to be the delivery personnel at Domino’s, this is a question you’d want to raise. At least, you want to be sure how much money you’ll make. And, you may want to know how busy you’re going to be. 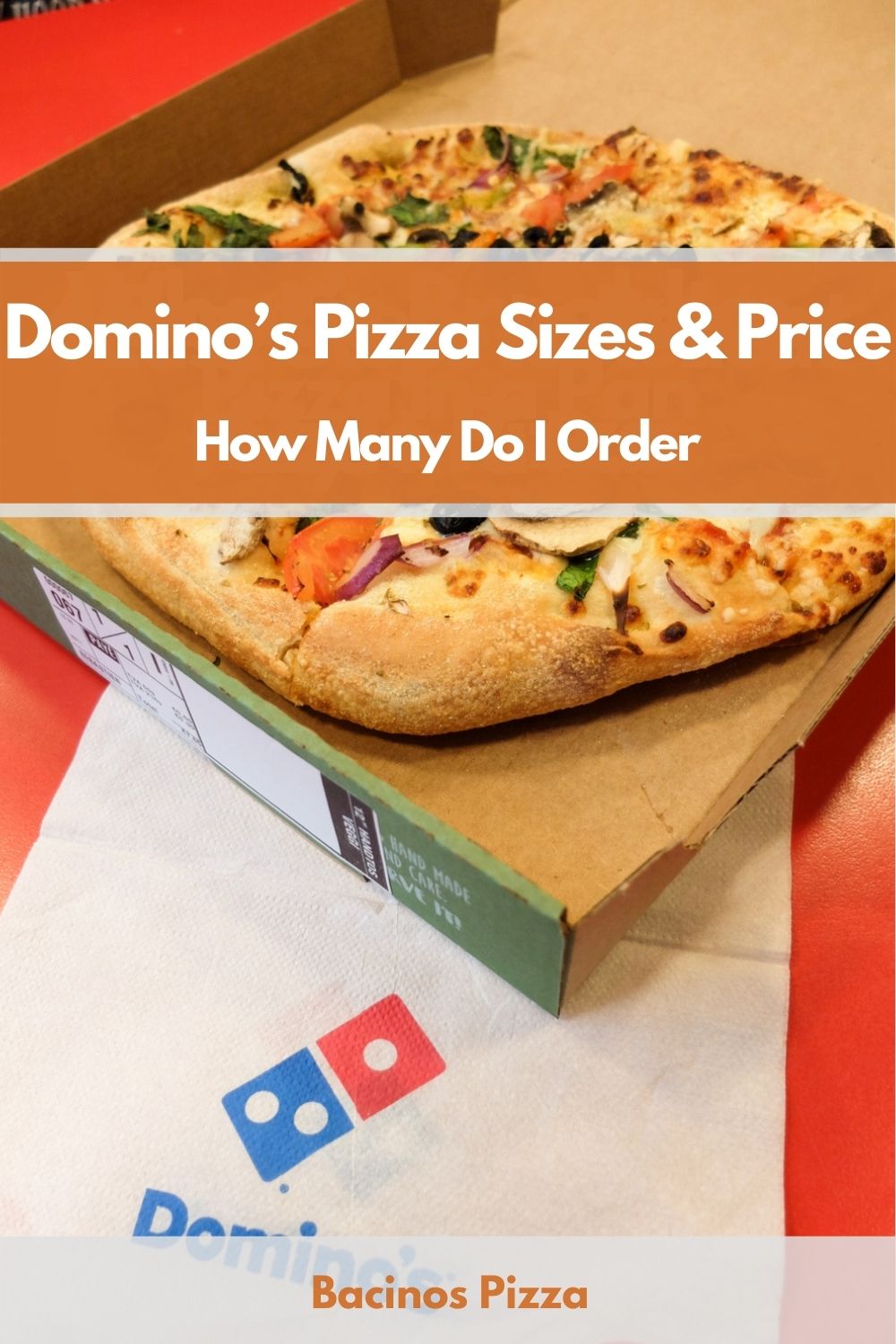 3 thoughts on “Domino’s Pizza Sizes & Price: How Many Do I Order?”