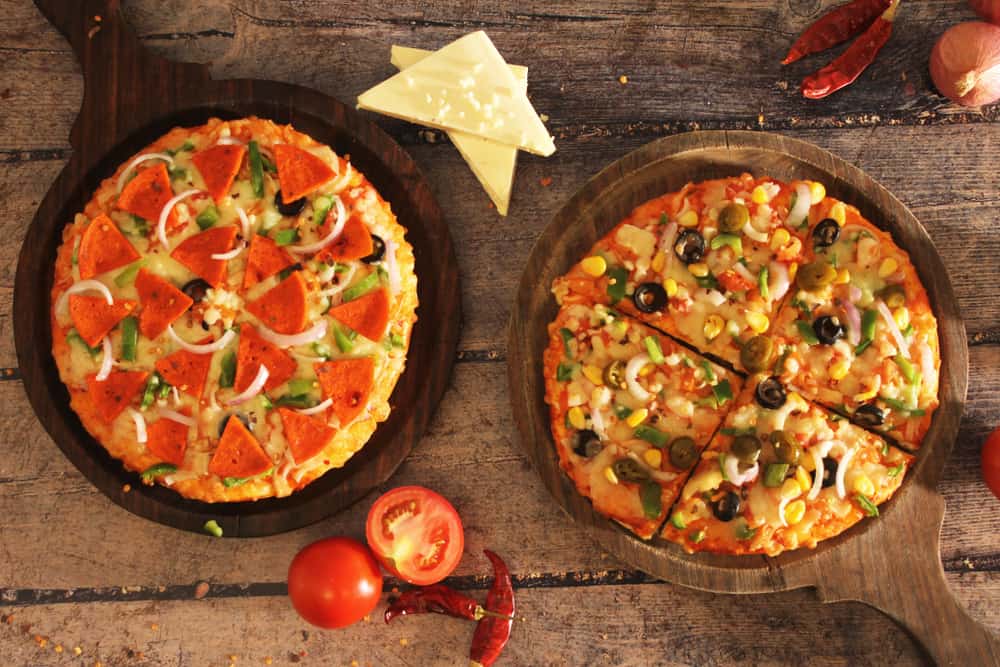 There are many types of pizza crusts that you might want to order and try out. And they’re usually a far cry from each other in terms of flavor. So, how does hand-tossed pizza stack up against pan pizza? 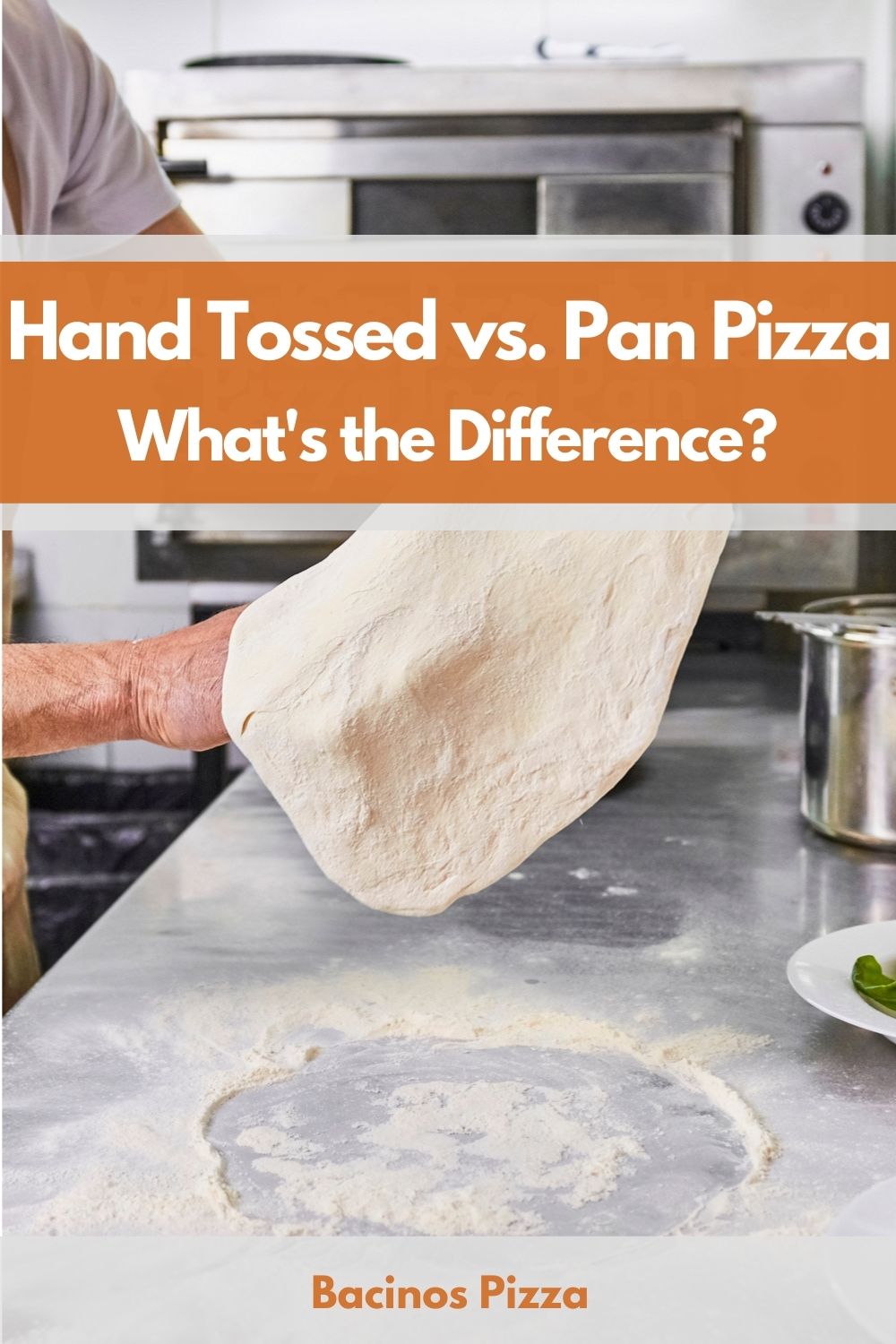 In summary, the hand-tossed pizza has a thinner and flatter crust. But the pan pizza has a fluffier and thicker crust, usually one inch deep or more. The pan pizza crust also appears more golden brown and fried, because you spritz some oil on the bottom of the pan before baking.

In this article, I’ll explore all the major differences between hand-tossed pizza and pan pizza. Continue reading if you’re interested in learning more about hand tossed vs. pan pizza. 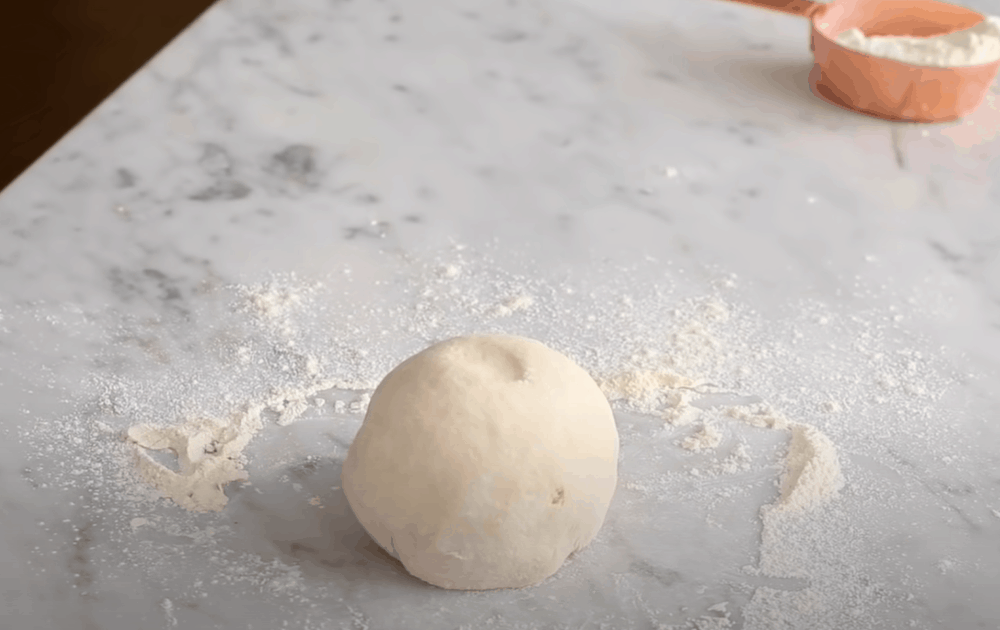 The dough ingredients for both types of pizza are more or less the same. They normally consist of flour, granulated yeast, salt, warm water, and olive oil.

However, hand-tossed pizza uses softer and thinner dough. This is because you need to throw the dough in the air to find the perfect shape before baking.

You’ll want to make sure the dough is just soft enough. Even so, don’t overdo it to avoid breaking when tossed in the air. The hand-tossed pizza dough often rises and spreads on the pan.

As for the pan pizza, the dough is a tad thicker and stiffer. Since there is little or no room to expand on the pan, it results in a fluffier pizza.

The pan pizza dough tends to grow in width and not in height. Therefore, the pizza turns out spongy and full of bubbles when cooked. 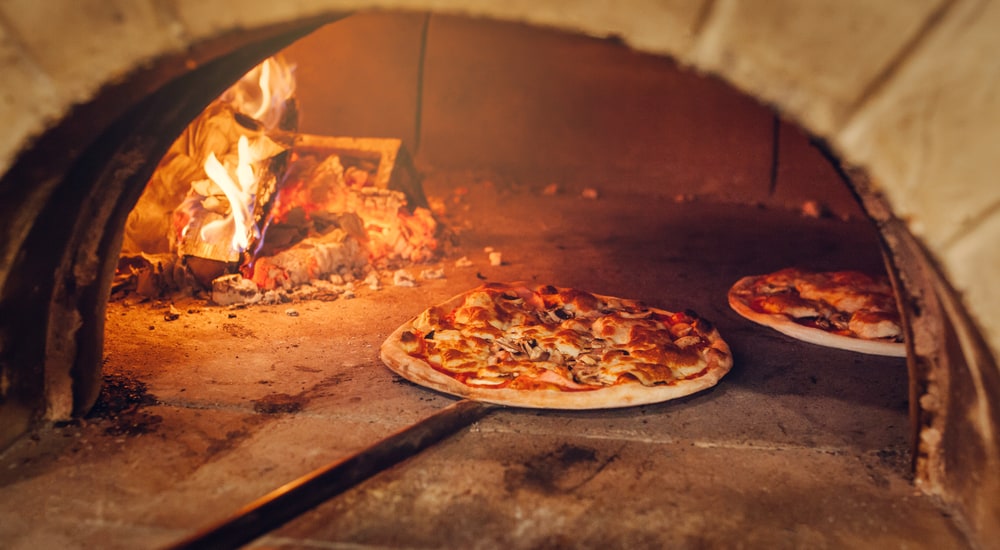 Hand-tossed pizza also differs from pan pizza as far as preparation techniques go. To make hand-tossed pizza, you first knead the dough until it’s soft, and then toss it repeatedly in the air to find the right shape.

Here’s a video that illustrates how to make hand-tossed pizza at home:

You’re recommended to hold the dough with the back of your fist to avoid tearing it up. Once you get the correct dough size and thickness, roll it onto a burning-hot pizza stone or steel. And cook it in an oven at around 500˚F (260˚C) for 10-15 minutes.

It would be best to have a pizza peel to transfer the pizza on and off the oven. But if there’s no peel within easy reach, parchment paper will do.

Know that it takes practice to master the art of hand-tossing the dough. So, it’ll probably take some time before you produce a crust that can hold the toppings without crumbling down.

It’s relatively easier to make a pan pizza than a hand-tossed one. You first need to oil the dough and shape it like a ball.

Then, use your fingertips to press the dough into the bottom of a heavy-duty cake pan or cast-iron skillet. Ideally, poking the oiled dough into the pan helps you get the desired shape.

You can watch this video to learn how to make a pan pizza with browned base and crispy rim:

Make sure you coat the pan with a tablespoon of oil before baking. This not only prevents the dough from sticking onto the pan but also helps you get a crispier crust.

The pan pizza is baked in an oven at temperatures above 500˚F (260˚C) for 25-35 minutes. And because no tossing is involved here, you don’t require any special skill to make a pan pizza.

There is a significant difference between the hand-tossed and pan pizza regarding the crust. The hand-tossed pizza has a flatter and thinner crust with little cheese to it.

Usually, the tossing action causes the air bubbles to burst in the dough. Accordingly, the dough won’t rise in the oven, resulting in a thin- or medium-size crust.

Note that the hand-tossed pizza is cooked directly in the oven without oil. In that case, the crust won’t look as greasy as the pan pizza. Instead, it will take a drier, more blistered appearance.

The pan pizza crust, also known as the deep-dish pizza crust, is thicker and fluffier with more cheese. This is because the dough has little to no room to expand, so it only grows in width but not in height.

When preparing the pan pizza, you’ll be obliged to apply a thin layer of oil at the bottom of the pan. Therefore, the resulting crust will be perfectly fried and browned. It will also have an oily look due to the oiling of the dough and the coating of the pan.

In general, though, both the hand-tossed pizza and pan pizza are crispy. Hence, whether you go for the former or the latter, you get that delightful crunchiness you so much crave.

Essentially, you might want to order a hand-tossed pizza if you prefer the classics more. On the contrary, a pan pizza is great if you like to try something that tastes like fried bread.

Both types of pizza may include the same ingredients for the toppings. However, the traditional hand-tossed (Neapolitan) pizza has a thinner crust.

As such, it supports fewer toppings and uses less cheese and sauce. The popular toppings for hand-tossed pizza may comprise fresh mozzarella, tomatoes, basil leaves, veggies, olive oil, and oregano.

You can apply your own creativity here and add different toppings as you wish. Things like pineapple, seasonings, and spices can come in handy. The hand-tossed pizza is designed to be eaten with hands.

The pan pizza can handle much more toppings due to its thicker crust. In most cases, the thick crust features a five-cheese blend of mozzarella, white cheddar, fontina, asiago, and provolone.

You can also get creative and add your own combinations of toppings depending on how you want your pizza to taste.

For example, I’ve seen many pizza lovers complement their crust with classic pepperoni and vegetables.

You might also want to sprinkle some green papers and Parmesan cheese over the tomato sauce to accentuate the taste. Because the pan pizza is thick, you’ll want to eat it with a knife and fork.

Notably, the pan pizza uses more cheese on the toppings than the hand-tossed pizza. For that reason, it tends to look buttery and soft – not dry.

This is perfect for those who love cheese but hate the flavorless crust. All in all, both pizza types have their toppings evenly distributed.

The Taste and Texture 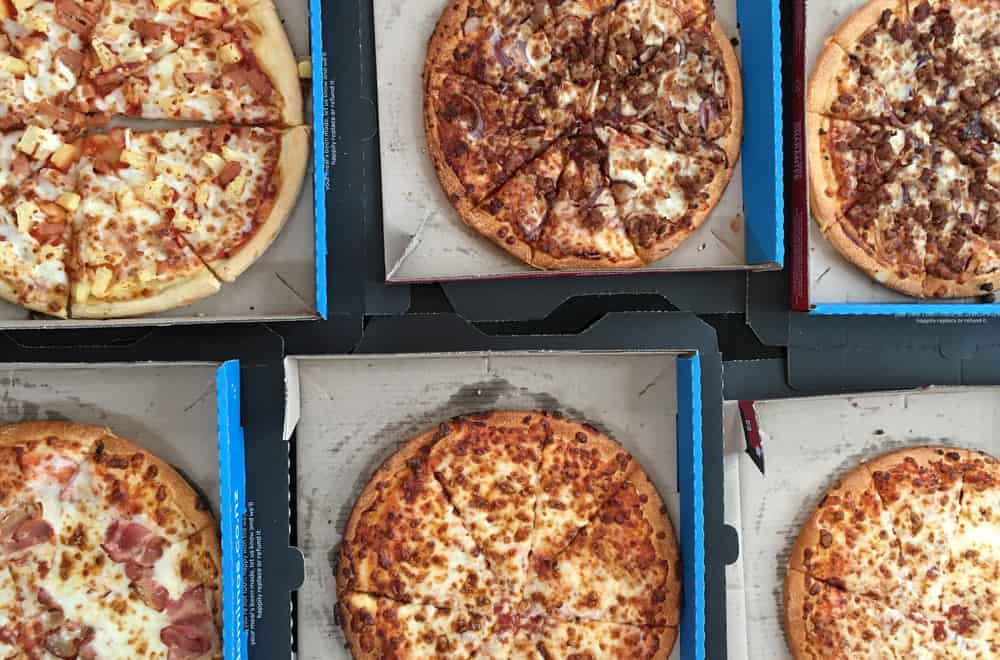 Like I said earlier, both types of pizzas have a crispy taste. Nevertheless, the hand-tossed pizza’s crust has a rather drier and blistered texture. It also has a distinct edge with little or no toppings.

Hand-tossed pizzas are a better choice for pizza enthusiasts who dislike too much oil. Because of how dry they are, they feel crunchy to the bite.

As for the pan pizza, this one has a bread-like fluffy texture. Its thick, bready crust can be 1-inch deep or so.

And, because you spritz some oil at the bottom of the pan to bake, the pizza will have a rather fried and golden brown crust. The edges of the crust will also look different from those of the hand-tossed pizza.

Thanks to the pan pizza’s thicker and sturdier crust, it’s easy to stuff more cheese, sauce, and toppings. These adornments will normally spread all the way to the edges of the crust.

Given that the pan pizza comes stuffed with more cheese, the crust tends to have a softer texture. This, coupled with the pie’s perfect golden-brown crust, gives the pizza a wonderful blend of crispiness and succulence.

Which one is healthier between hand-tossed and pan pizza?

On the one hand, the thicker pan pizza crust contains meatier toppings. Therefore, it’s loaded with much more calories than the hand-tossed counterpart and is better suited for folks who lead a more active lifestyle.

On the other hand, the hand-tossed pizza’s thinner crust can handle few toppings. As a result, it’s the definitive version for people who don’t exercise a lot. If you’re on a diet, you better opt for hand-tossed variants.

Which are the common forms of hand-tossed and pan pizzas?

The hand-tossed pizza family includes the two famous forms of pizza—thin crust and wood-fired. They’re both baked in the wood-burning oven under blazing heat. The New York-style pizza is another kind of hand-tossed pizza, though its crust is thicker than the Neapolitan’s.

There’s no right or wrong with regards to hand tossed vs. pan pizza. Rather, it all depends on your unique taste and preferences. The hand-tossed pizza will be your perfect delicacy if you want a thin pie with less oil and fewer toppings.

Alternatively, the pan pizza will give you a nice experience if you prefer a thick slice with plenty of cheese and toppings. Remember, both options are almost identical when it comes to crunchiness. 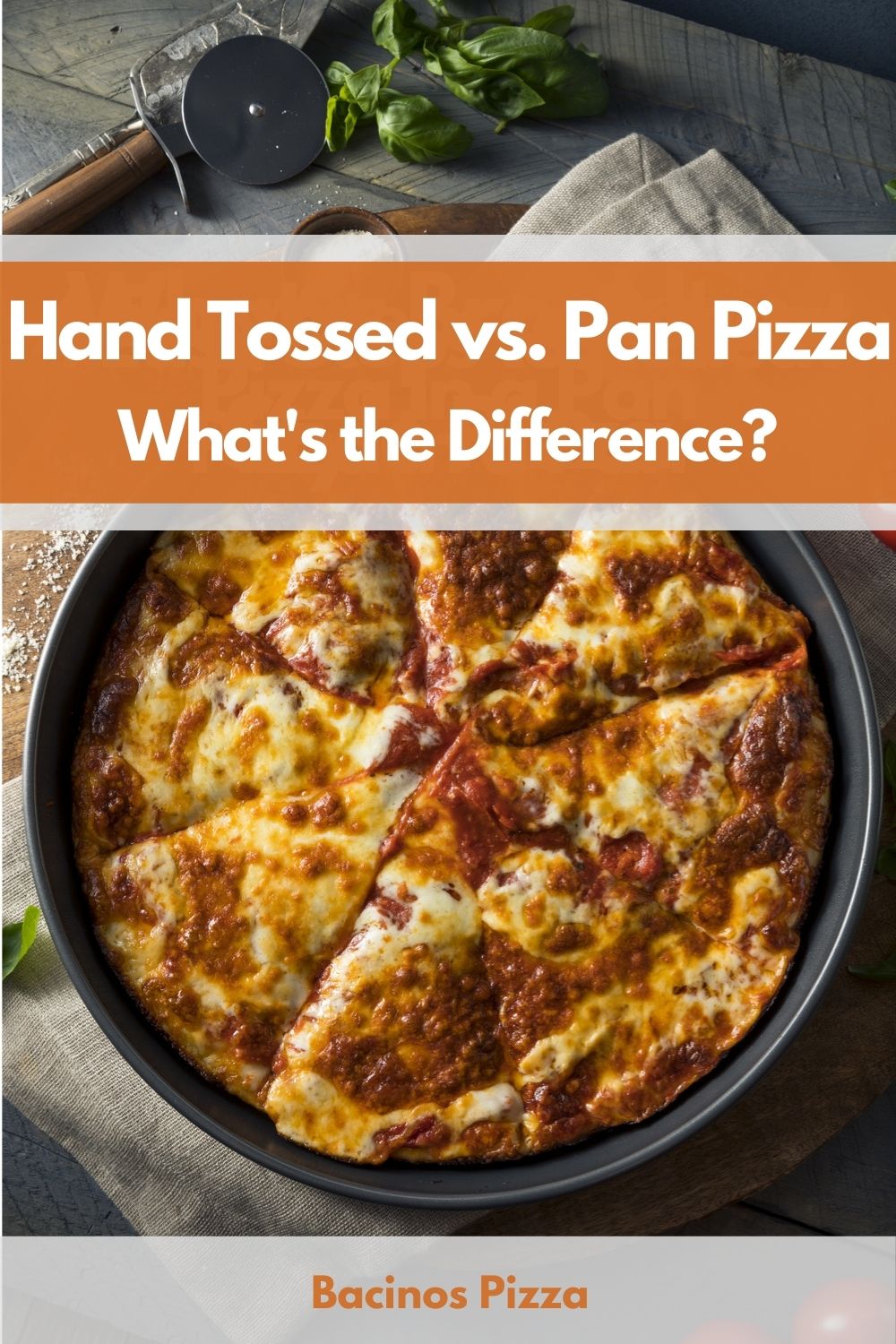