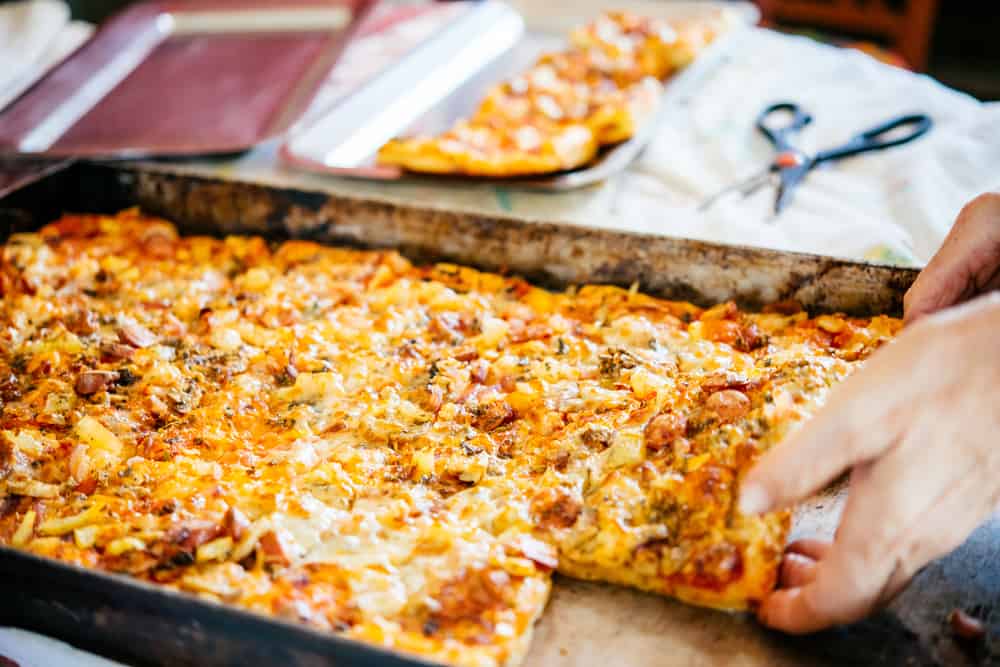 If you love your pizza – and who doesn’t?! – you’ll want to try the many different varieties on offer. One of those is Sicilian pizza – and it’s well worth checking out. 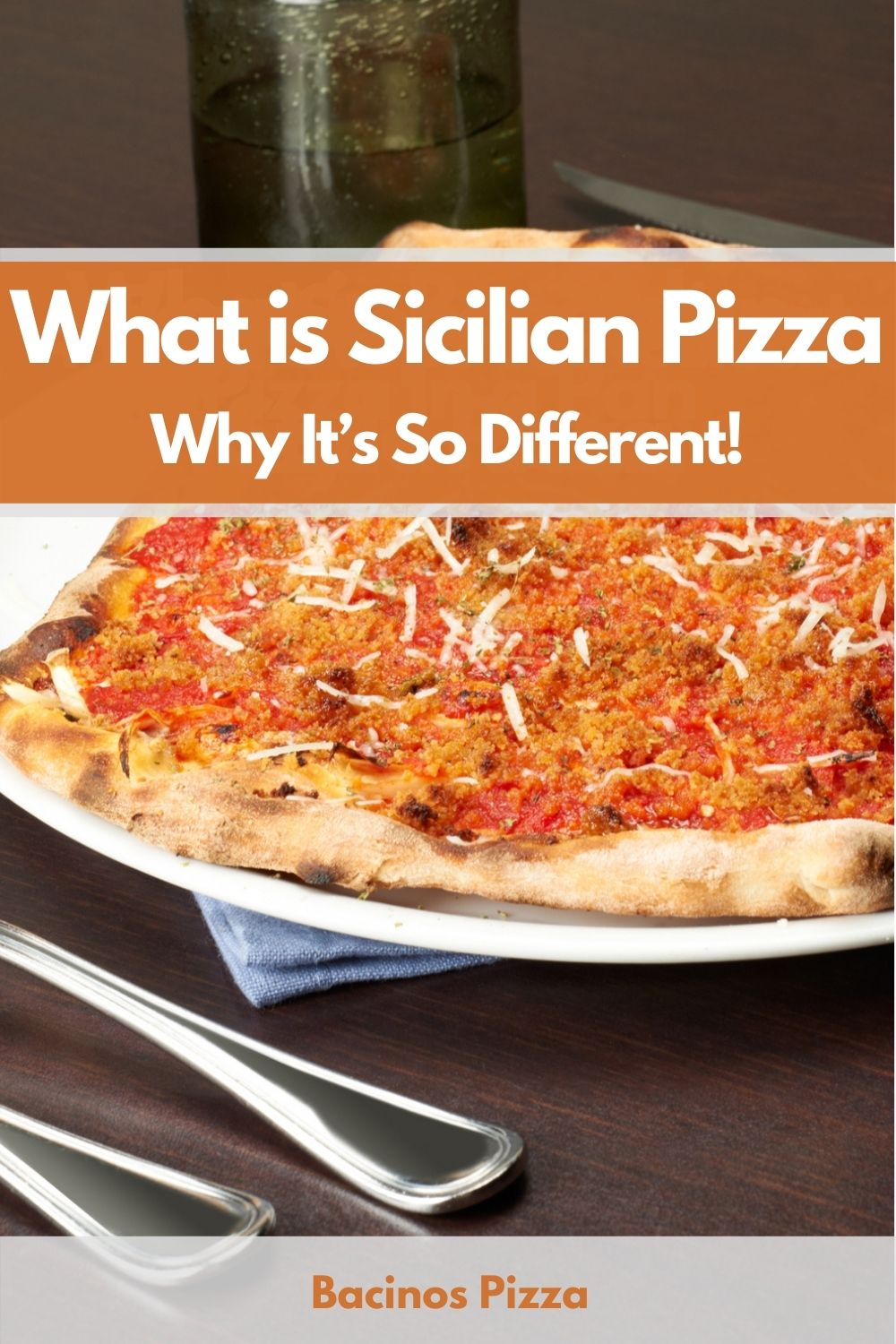 But what is Sicilian pizza? That’s what we’re here to find out! We’re going to take you through everything you need to know. We’ll explore the different varieties and ingredients, and we’ll learn about the history of this tasty dish.

So if you’re ready to find out more, let’s get started!

What is Sicilian pizza?

Many of us know Sicilian pizza as the kind with a thick, airy crust served in rectangular slices. But did you know that the type of pizza known in the US as Sicilian is, in fact, only one of a number of varieties?

Sicilian pizza is simply pizza prepared in a traditional Sicilian style. It’s called sfincione in Italian and sfinciuni in Sicilian. And there are plenty of local variations across the island of Sicily. The regions of Palermo, Messina, Catania and Siracusa all have their own particular take on this pizza.

And when it found a home in the United States, Sicilian pizza adapted again. The American version has its own distinctive characteristics too.

So what’s different about these different styles?

The Sicilian pizza first originated in the region of Palermo. Here, it’s served in rectangular slices, and there’s more of pretty much every ingredient than you’ll get with a Neapolitan pizza. More sauce, more cheese, and more dough.

The cheese is typically strongly flavored, and the sauce has a rich taste too, incorporating garlic, onions and herbs. Anchovies are a traditional topping.

Some Palermitan pizzerias will put the sauce on top of the other toppings. The idea is that this prevents it from soaking into the pizza crust, keeping it nice and crisp. 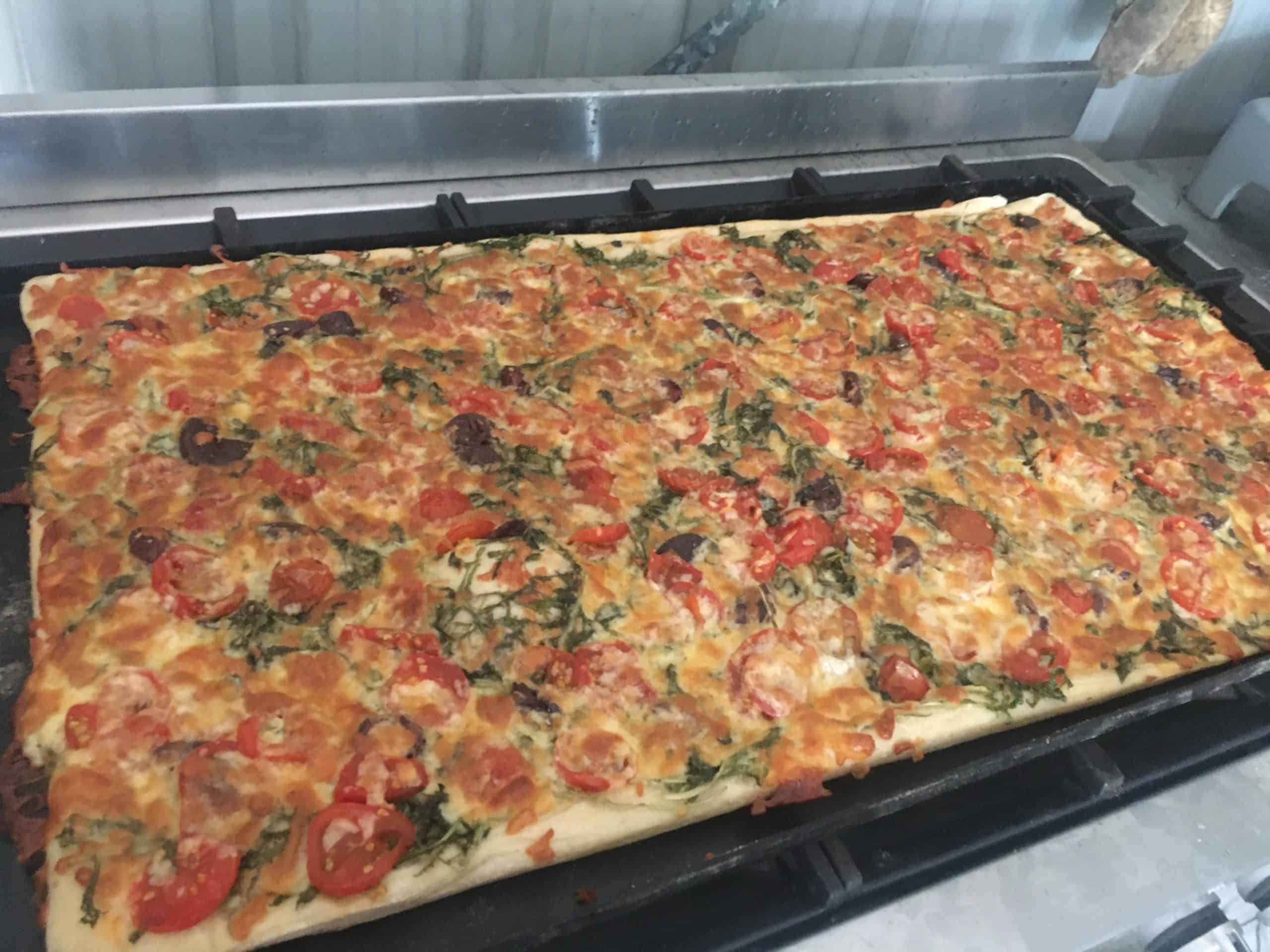 Move east from Palermo, and the Sicilian pizza changes form. In the region of Messina, in the northeast of the island, the traditional pizza is called piduni. This is quite different in appearance. It’s actually a form of calzone – a pizza roll – made with tomatoes, anchovies, endives and toma cheese. 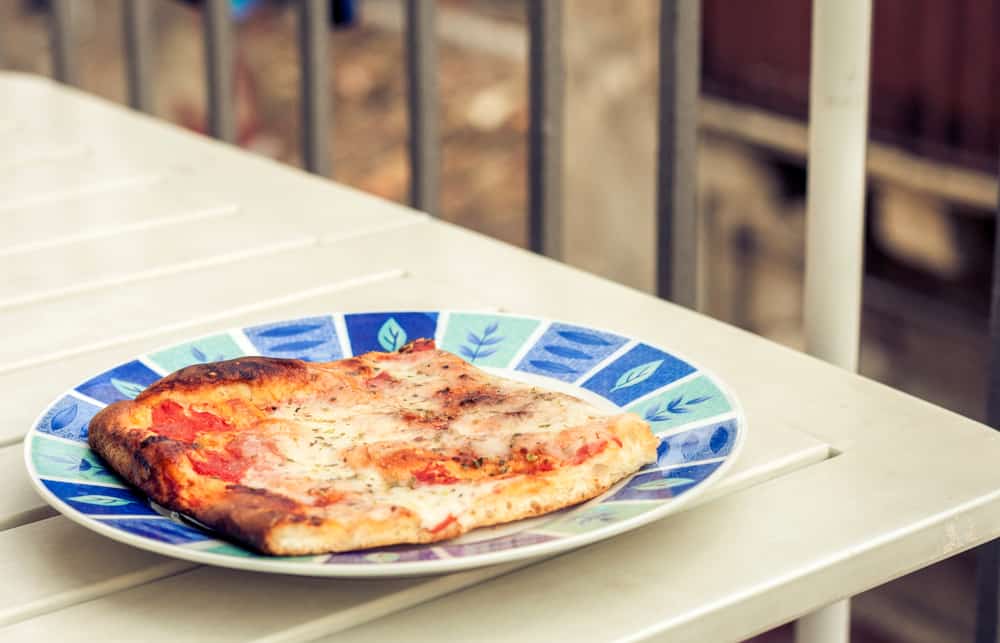 Move down the east coast of Sicily to the province of Catania, and the pizza changes again. Here, there are two main styles – pizza made in the city, and the pizza of the surrounding region.

In both cases, the pizza is actually a pizza sandwich – two layers of dough, with toppings in the middle.

But in Catania itself, the pizza – known as scacciata – will have a layer of toma cheese and anchovies in between. In the surrounding region, the filling is more likely to be a mixture of tomato sauce, broccoli, sausages and potatoes.

And if that wasn’t enough variation, the towns of Viagrande and Zafferana Etnea have their own particular take on pizza too. In this case, a pizza siciliana takes the form of a calzone filled with anchovies and cheese, then fried.

The pizza in the province of Siracuse, in the south east of the island, is different again. Here, it’s known as pizzòlu. And it breaks the tradition of being served in rectangular slices.

The pizza here is round – but that’s where the similarity to a Neapolitan ends. It’s formed of a standard base, a layer of filling, then a thin crust on top flavored with herbs, parmesan and olive oil.

As a result, a slice will be enough as a meal for all but the biggest appetites!

5. The American take on Sicilian pizza 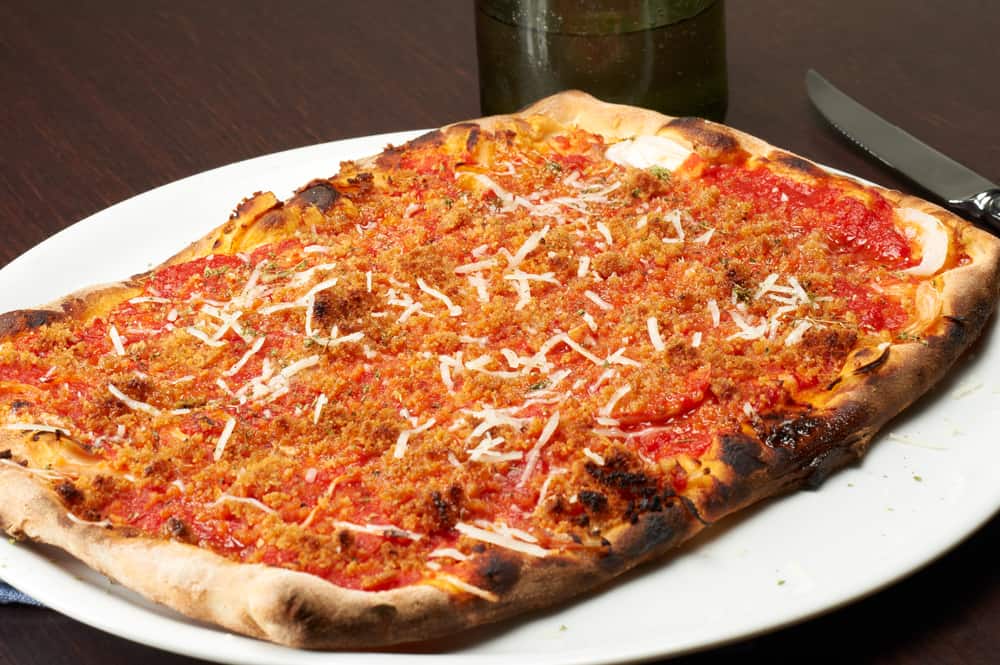 Sicilian pizza was brought to the USA by Italian immigrants. Since then, it’s developed its own distinctive style.

This pizza is always served in a rectangular or square slice. The base is crunchy, airy and thick – typically more than an inch deep. It’s particularly popular in areas with larger Italian American populations, with a devoted following across the north eastern states.

In some parts of the country, particularly coastal areas of New Hampshire and Massachusetts, it’s known as “beach pizza”. It is, after all, the perfect snack for picnics on the sand!

And in New York, there’s even a special Brooklyn version of the Sicilian pizza. With this one, the mozzarella goes on top of the base. The tomato sauce is then spread over the cheese, forming the top layer.

The tomato is more exposed to the heat and reduces more during baking as a result. That gives it an intense, rich hit of tomato flavor. Delicious!

With so many different kinds of Sicilian pizza, it’s perhaps not surprising that it can be confused with other styles.

Like most Sicilian pizzas, it’s served in rectangular or square slices. The base is made of thick dough. That’s then topped with tomato sauce, herbs like oregano, and often with romano cheese too.

But unlike Sicilian pizza, tomato pie is designed to be eaten cold. And other than the sauce, cheese and herbs, you won’t get any other toppings.

The consistency of the crust is similar to focaccia. That’s similar to the versions of Sicilian pizza you’ll find in most parts of the US. But the traditional sfincione found in Sicily has a spongier texture, more like brioche. Indeed, sfincione in English means “thick sponge”. 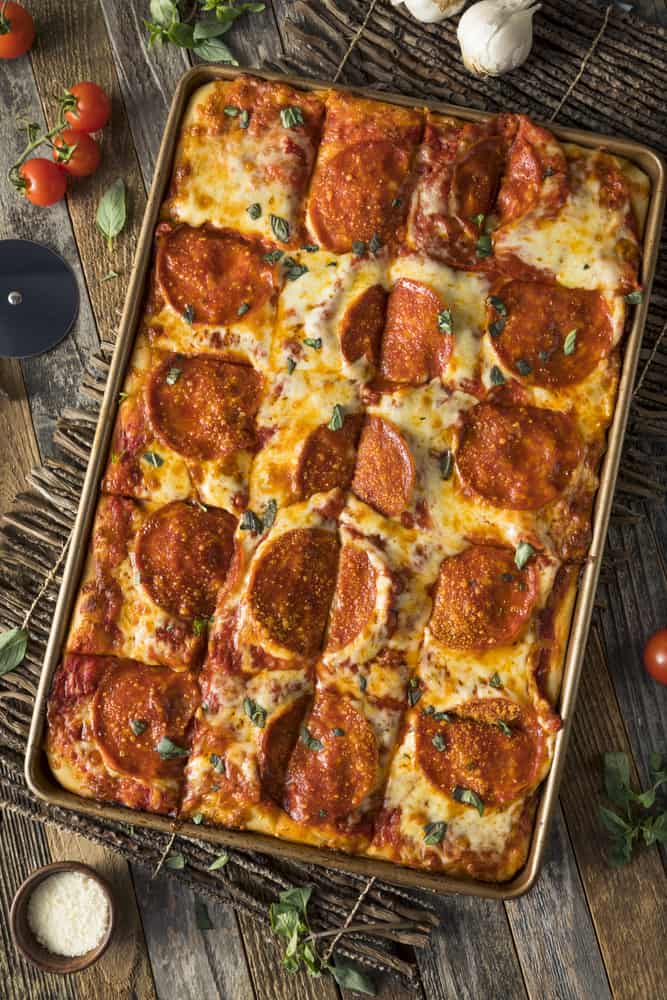 The thick crust of a Sicilian pizza also bears some similarities to a pan pizza.

The most obvious difference between the two styles is in the shape. Most deep pan pizzas are served whole, as a round pie. But as we now know, Sicilian pizza is baked in a rectangular dish and served in squares or rectangular slices.

The other difference comes with the toppings. In either case, you can put whatever meat, fish or vegetables you like on top, alongside the tomato sauce and cheese.

With a deep pan pizza, however, the outer crust is left bare. Whereas with a Sicilian pizza, the sauce and toppings will usually go right to the edge.

The history of Sicilian pizza

Sicilian pizza has an illustrious history. Sfincione was first popular in its island home as far back as the nineteenth century. It’s thought to have developed from the Italian bread, focaccia, which has an even longer history.

It was first brought to American shores by Italian immigrants. There, mozzarella became a standard ingredient.

This is likely to have resulted from its ready availability. New York, an epicenter of early pizza innovations, had a thriving dairy industry. That meant that fresh mozzarella was both accessible and cheap.

The Second World War took American soldiers all over Europe. For many who returned, pizza had become a much-loved part of their diet. Their return saw a new demand for pizza, which for the first time began to be consumed outside traditional Italian American neighborhoods.

Sicilian pizza benefited from this boost alongside the Neapolitan. And it’s been one of America’s favorite foods ever since!

Making your own Sicilian pizza

If you fancy trying your hand at making your own Sicilian pizza at home, there are lots of great recipes online. And you can make it as simple or as advanced as you like.

Purchase no-knead dough, or make it yourself from scratch. Craft your own sauce with chopped tomatoes, oregano, olive oil and salt – or get it out of jar.

It’s a great option if you’re catering for a large gathering. You can prepare your dough well in advance. Then on the day of your party, make a big pizza and cut it into squares for finger food.

Whatever recipe you’re using, a hot oven will give you a crispier crust. Set your oven temperature to as close to 500 degrees Fahrenheit as possible. And make sure it’s fully heated up before you put in your pizza.

When you do, place it on one of the lower shelves. That will avoid the top burning before the base is cooked through. Placing your pizza on a thin aluminum cookie sheet will also give you a crispier base.

When it comes to toppings, you can choose whatever you like. The traditional American version of Sicilian pizza uses mozzarella. But if you fancy a more authentic Italian experience, see if you can source toma cheese. That will give your pizza great taste and texture. And it will be a talking point too.

Time to enjoy a slice of Sicilian pizza!

We hope you’ve enjoyed our low-down on Sicilian pizza! This tasty dish has a long and fascinating history. It’s been savored by Italians and Americans alike for well over a hundred years. If you haven’t tried it before, what are you waiting for?

Whether you opt for a classic American take on the recipe or choose a regional Sicilian speciality, you’ll be getting plenty of flavors.

And if you’re catering for a crowd, why not try out one of the recipes online? It’s sure to go down a storm. Just try not to eat all the slices yourself! 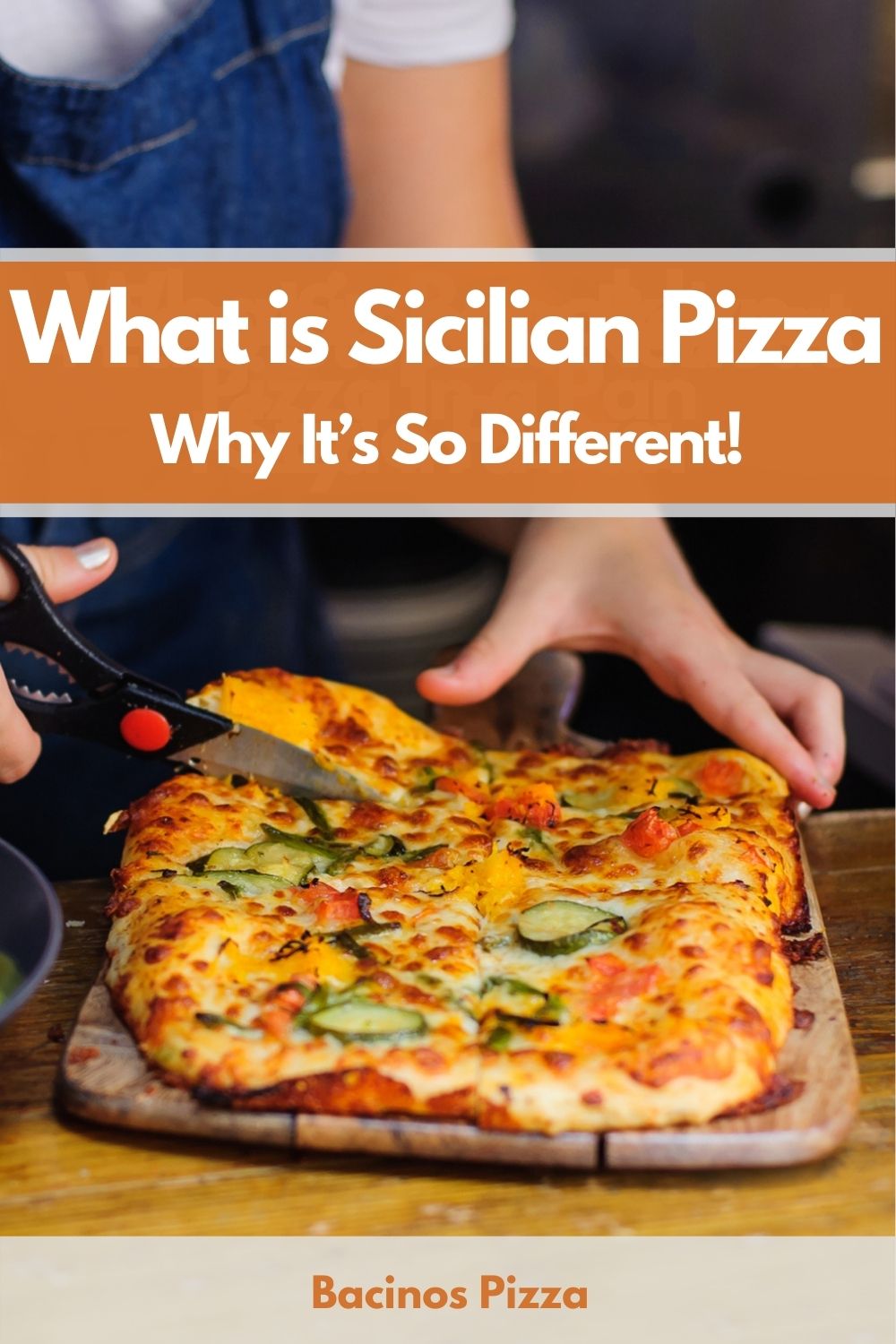