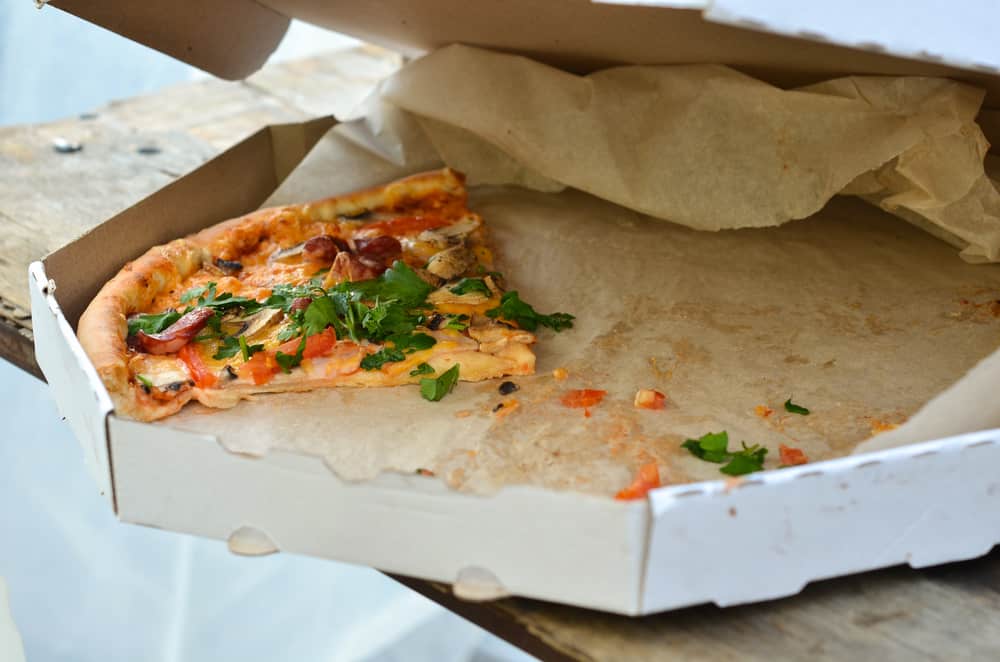 We all know how important it is to recycle our waste. But it’s not always easy to know what can go into your recycling bin. One of the trickier items is something many of us regularly have to deal with – the boxes from takeout pizza. 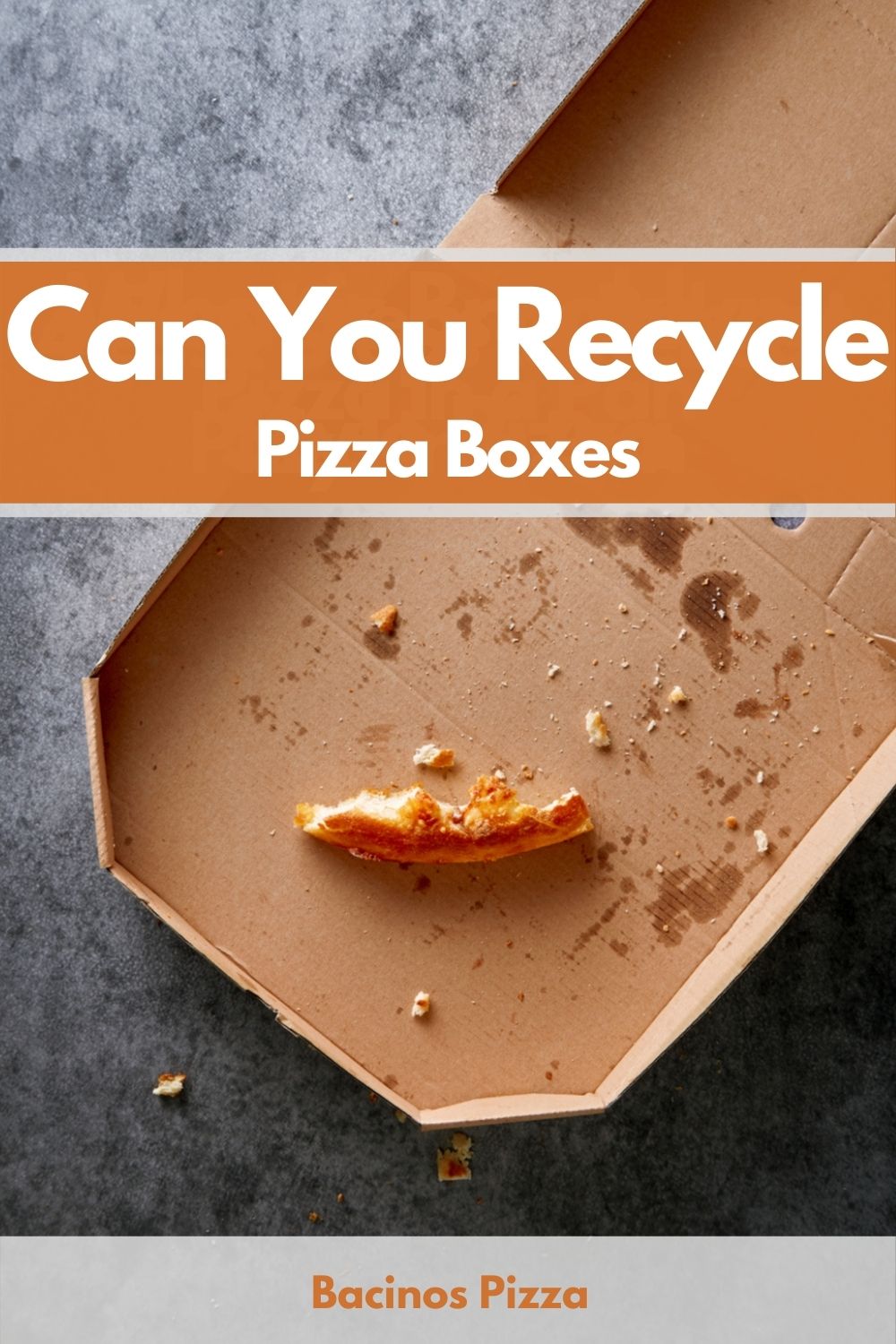 Yes, they’re made of cardboard. But they’re also usually covered in oils from our tasty pies. So can you recycle pizza boxes?

This simple question, it turns out, doesn’t have a simple answer!

If, by any chance, your pizza box is miraculously grease free, recycle it. It won’t cause any problems to your local recycling plant.

But if, as with most boxes, there are some grease and food particles, the answer isn’t quite so straightforward.

Grease and oils can create a lot of problems in the recycling process. That’s because the paper and cardboard is mixed with water in the recycling plant to form a slurry. It’s this slurry that is then turned into new paper.

If there’s too much oil and grease present, it will collect on the surface of the slurry. The paper fibers cannot then be separated out from the oil. The paper that results will have holes or spots in it, and can’t be used.

All this means that whether or not your box will be recyclable may depend on how soiled it is. And policies can vary between recycling centers.

Is grease and food contamination a real problem for recycling? 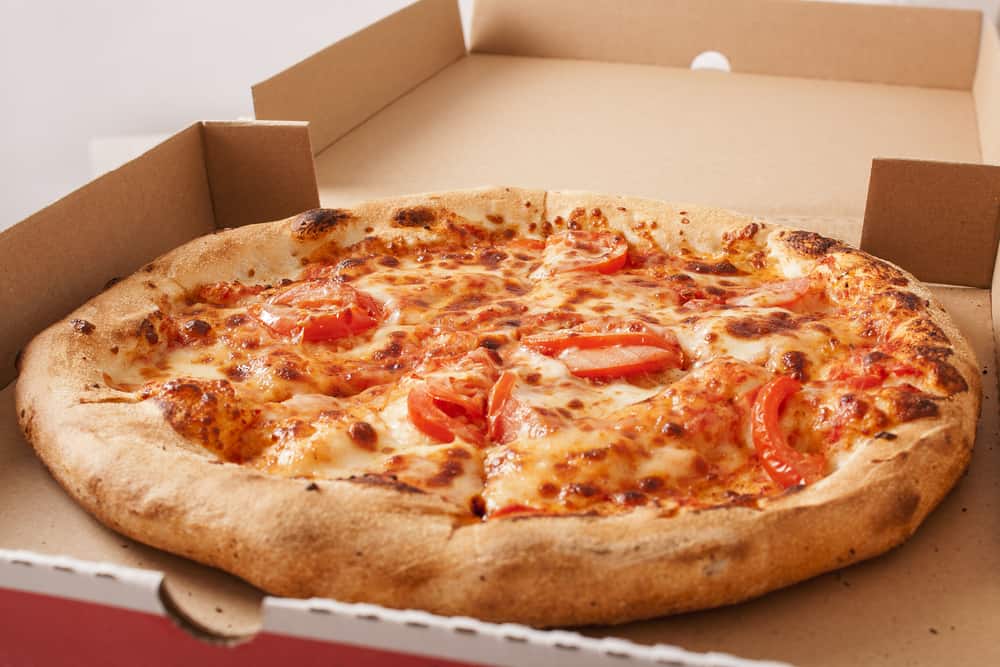 When it comes to considering whether your pizza box can be recycled, there are two separate factors to consider. One is the grease and oil that can cling to the cardboard. The other is any bits of food it still contains.

Food is the easiest to deal with. Just tip out any crumbs and other debris before you put your box out for recycling. And if there’s a bit of pepperoni stuck to the lid, pick it off.

But when it comes to grease and oil, you don’t have that option. So is it really a problem for recycling centers?

The pizza chain Domino’s worked with their box supplier, WestRock, to commission a study looking at just that. It concluded that the levels of oil typically found on pizza boxes aren’t enough to interfere with recycling. And even the odd bit of cheese wouldn’t cause problems in recycling facilities.

Not all recycling centers, however, agree. So where does that leave you?

Different recycling facilities will have different policies when it comes to pizza boxes. The best way to find out what to do with your boxes, then, is to call them up and ask.

Some will accept boxes as long as they have minimal soiling. Others have a blanket ban. But you may be able to challenge this.

Domino’s have worked with WestRock and a second box supplier, Pratts, to fund a toolkit for recycling centers. The toolkit was developed by The Recycling Partnership. It aims to demonstrate that recycling centers have nothing to fear from pizza boxes.

So if your local recycling center says it won’t accept your pizza box, send them the toolkit. It may be all that’s needed to get them to change their policy. And that in turn could save many boxes from landfill.

Pizza lovers based in the US can also check online whether their local recycling center will accept pizza boxes. Check out www.recycling.dominos.com for more details.

What if your recycling center won’t budge?

If you’re unlucky enough to have a local recycling center that won’t accept boxes and won’t change its policy, don’t despair. You may still be able to recycle unsoiled pizza boxes. And you can rescue parts of the cardboard that have escaped oils and grease.

Simply tear off the soiled parts of your pizza box and dispose of them with your main waste. You can then include the unsoiled pieces of cardboard with your recycling. That way you’ll be minimizing the amount of waste that gets sent to landfill.

Don’t try to recycle anything that’s too soiled 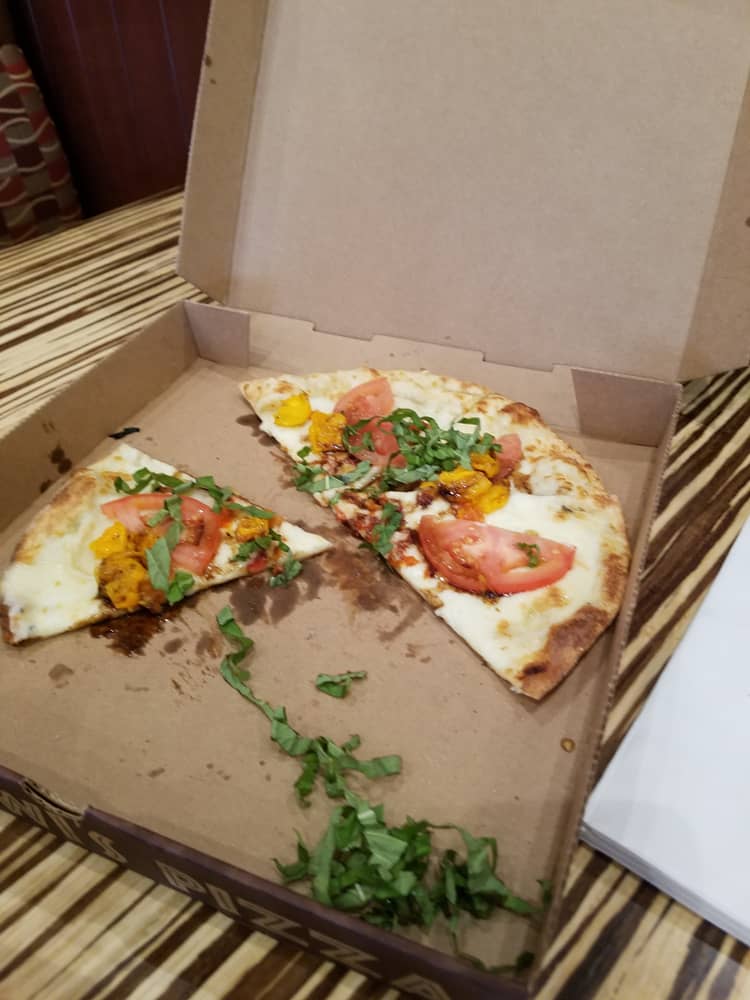 If your pizza box is covered in oil and food particles, don’t be tempted to put it into your recycling bin anyway. It’s understandable to want to minimize your non-recyclable waste. But adding materials that really aren’t suitable for recycling will do more harm than good.

There is actually a term for this kind of behavior. It is known as aspirational recycling, or wish-cycling, and it can be very harmful to the sustainability of recycling operations.

The best outcome from wish-cycling is that the offending item will be spotted at the recycling center and removed. It will then go into the general waste, where it should have been put in the first place.

But the worst outcome is that a whole batch of recyclable materials is ruined. That means that they will then have to be got rid of. And that means that more waste, rather than less, will end up going to landfill.

If your pizza box is too soiled to be recycled, you may want to consider composting it instead. As long as the box isn’t printed with any toxic inks, it will be fine to go into your compost bin.

If you have a worm composter, this is a particularly good option. Shred the cardboard and place it at the bottom of your composter as bedding. The worms will love it.

And if you don’t have your own compost bin, you can contribute to municipal ones. Soiled pizza boxes can be put into the green bins now being used in many states. You’ll have the comfort of knowing they’ll be used to make compost instead of heading to landfill.

Watch out for pizza savers

You’ve emptied your pizza box, recycled the clean cardboard and composted any really greasy bits. Fantastic! There’s just one last thing to watch out for.

But the plastic pizza savers won’t be able to go in with your cardboard recycling. Some recycling facilities may be able to recycle the plastic, but check first. If they can’t, you’ll need to dispose of them in your general waste.

How important is it to recycle your pizza boxes?

Pizza is a big business in the US. Across the country, around 2 billion pizza boxes are used every year. That’s nearly 7 million pounds of cardboard – the same weight as over 200,000 cars. So recycling can make an enormous difference to the amount of waste going to landfill.

But recycling is only part of the picture. Even though most pizza boxes include at least some recycled material, this is mixed with new pulp. That means that trees are still being cut down to feed our love of takeout pizza.

There is an alternative. Eco-friendly firms are now increasingly manufacturing plant-based containers for takeout foods. And after use, they’re fully compostable.

The PizzaRound from World Centric is a great example. It’s available in 12 and 14-inch diameters, and is made of bamboo and unbleached plant fibers. It won’t get soggy, the way cardboard boxes can. And it will decompose within 4 months in a commercial composting facility.

Why not contact your local pizza parlor and suggest they make the switch?

What about other types of recycling?

Knowing what can and can’t be recycled can be confusing. Different areas have different recycling policies and capacities. And items made from mixed materials can be tricky to know what to do with.

If you’re in any doubt about whether something can be recycled, the best bet is to check with your local recycling center. There are also some helpful apps to make the task quicker and easier.

Recycle Coach is a free app that enables you to get tailored information on the facilities in your area. It also includes information on your local collection schedule. The more people in each area use the app, the more information it will contain. So get your friends and family to sign up too!

We hope we’ve demystified the surprisingly complex question of whether pizza boxes can be recycled!

Just keep really greasy bits of cardboard out of your recycling, and the rest will be fine. And if you have a composter or a green bin, add the oily portions to that. You’ll be helping the composting process, as well as keeping more waste out of landfill.

Apps like Recycle Coach are an easy way of keeping abreast of what can and can’t be recycled in your area. And if your local recycling center isn’t yet accepting pizza boxes, why not send them the Recycling Partnership’s toolkit? You may be able to encourage them to change their approach.

Good luck with your recycling endeavors! 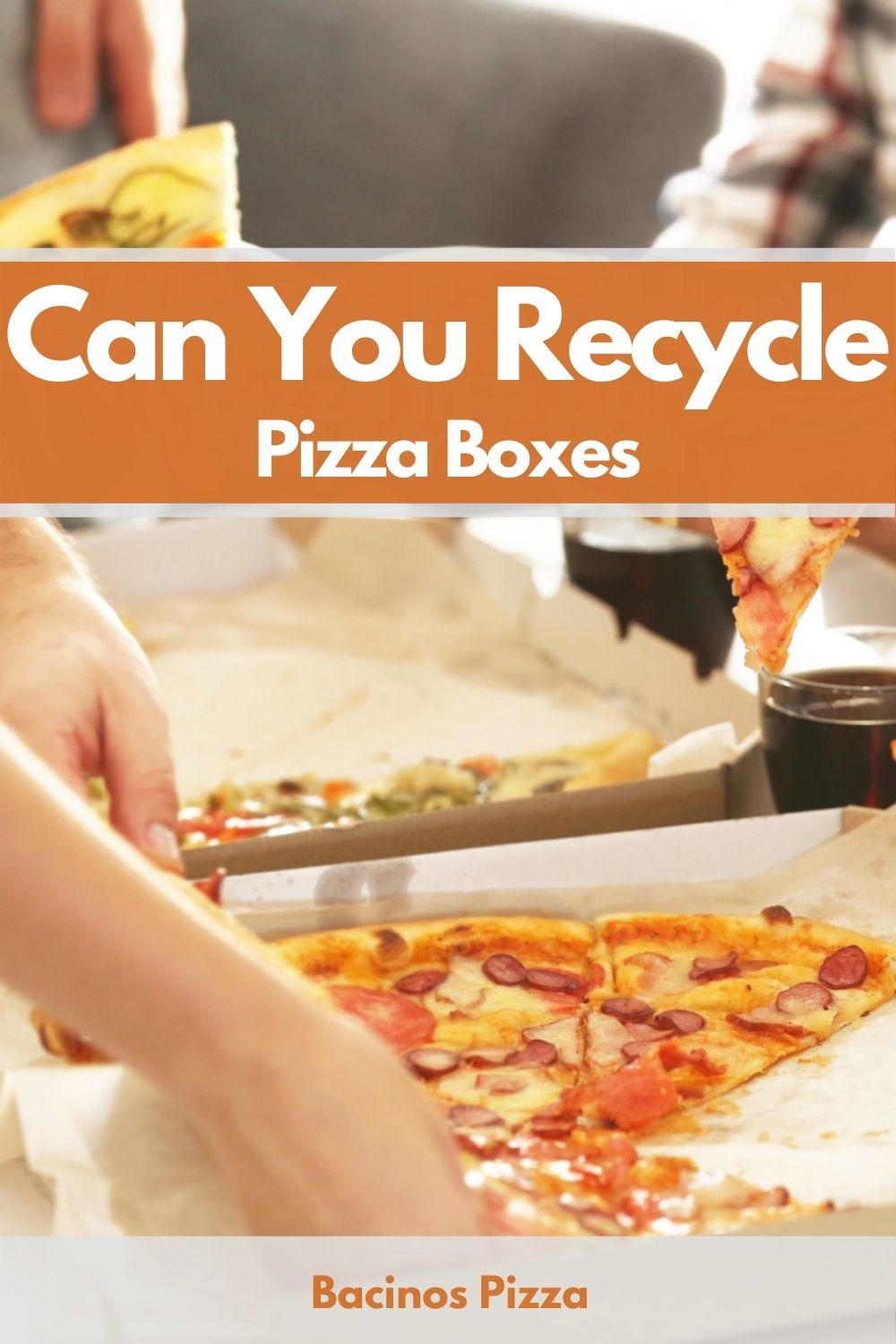