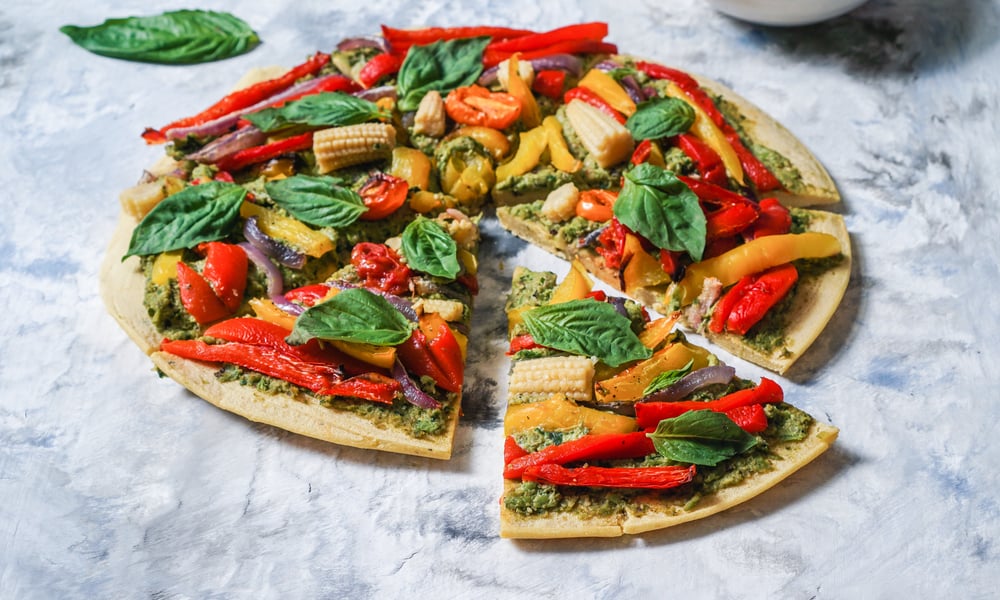 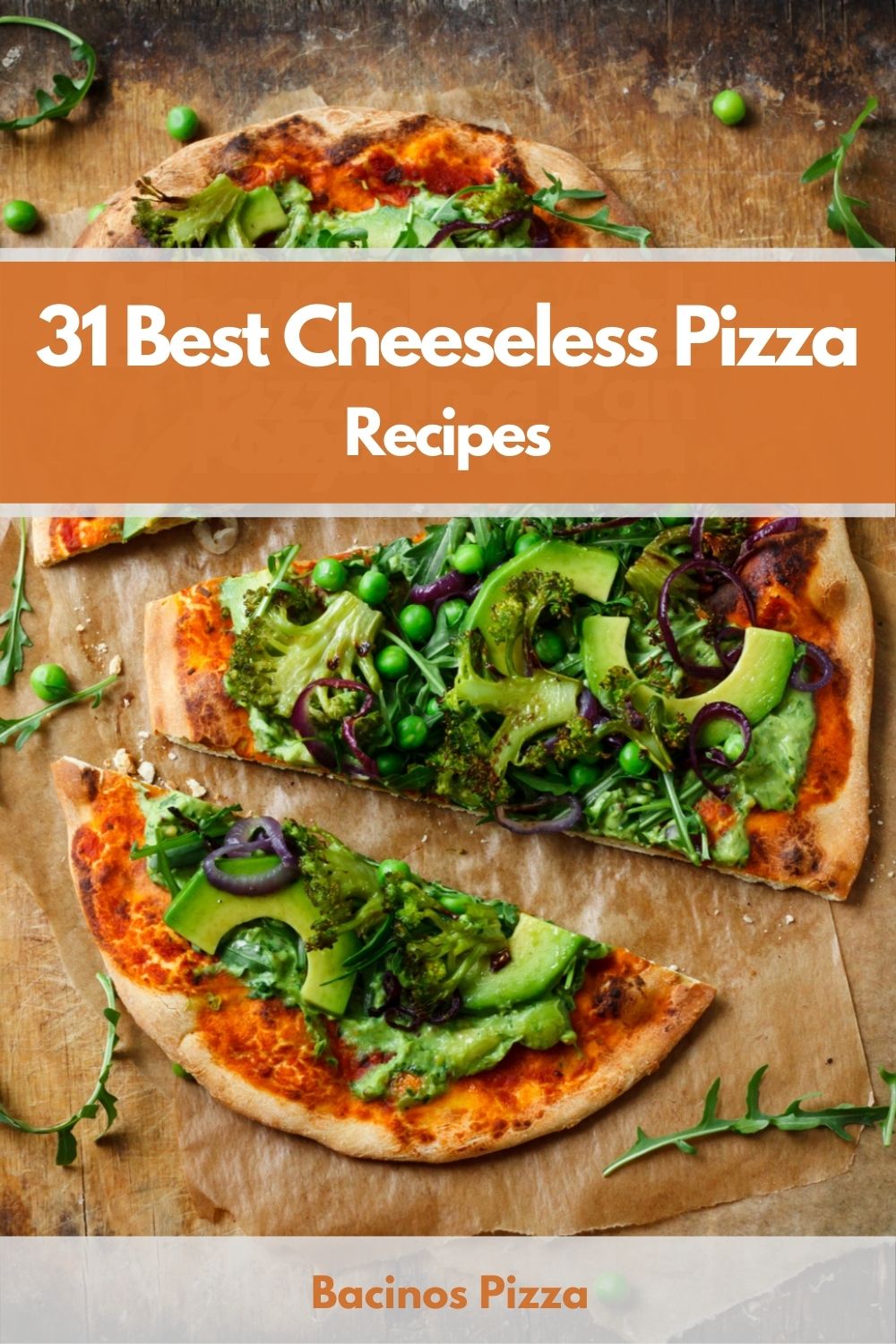 Is it even a pizza if it doesn’t have cheese? Blasphemy! But … unfortunately … there are lots of scenarios that may need you to skim off the cheese, pun intended. Maybe you have lactose issues and dairy allergies. Or a low-fat diet. Or recent veganism. You could try a cheeseless pizza recipe to satisfy your cravings without getting to the ER. So let’s find some good ones! 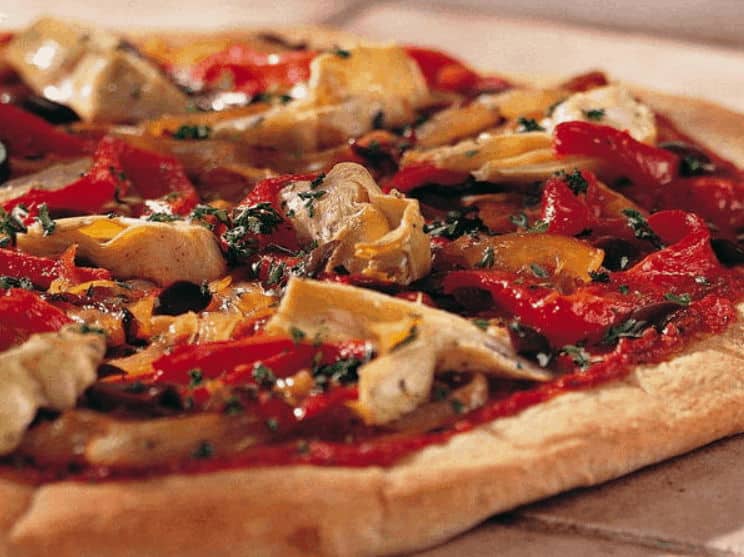 Vegans have a broad, encompassing value system. So while their dishes are designed to prevent any kind of cruelty to animals, they end up meeting other dietary, religious, and lifestyle needs too. So this cheeseless pizza recipe is not only vegan and lactose-free, it’s also kosher, halal, egg-free, nut-free, and soy-free. But it’s flavor-full and color-full, pun intended.

Here’s another versatile option for finicky eaters. No cheese, no yeast, this pizza doesn’t even need an oven! It does have lactose. And the dough is made with curd (raw baby cheddar). But if you thought you couldn’t have white sauce without cheese, try this creamy milk-and-flour variant. The recipe uses pizza sauce too so if anything it’s a… ‘pink pizza’? (red + white sauce)

3. Key to My Lime Cheeseless Pizza 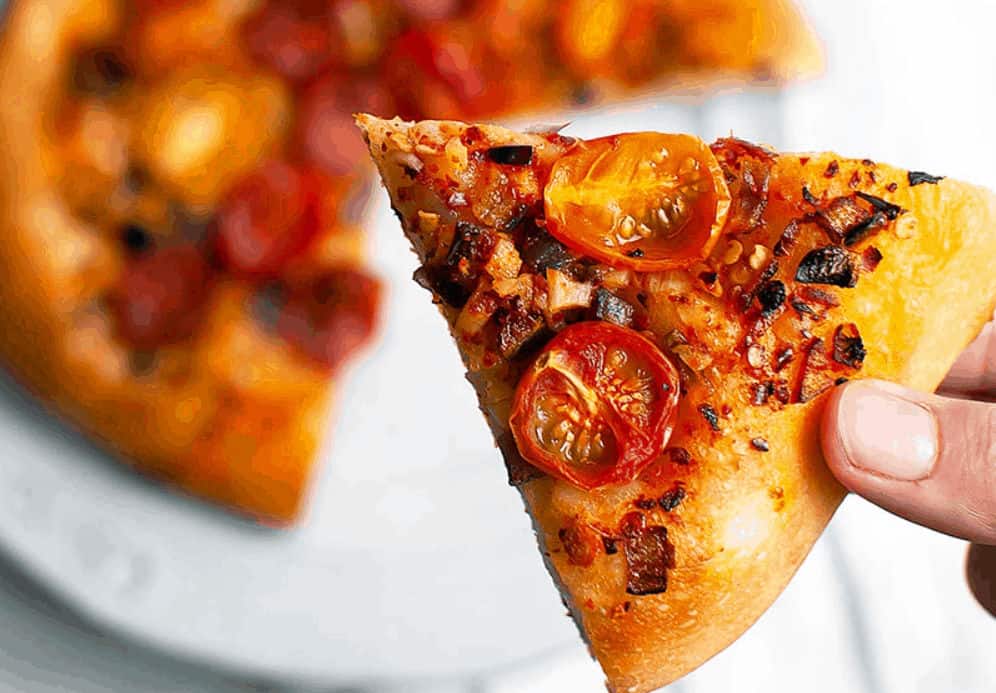 Cheeseless pizzas are often colorful. It’s not just about visually tricking your palate – it’s also about filling the ‘flavor gaps’ left by the cheese. This vegan cheeseless pizza recipe uses a gluten-free pizza dough topped with halved cherry tomatoes. If you’re not big on gluten-free, you can use any thin-crust Italian dough recipe. The pizza sauce has chili flakes.

Cheeseless pizzas aren’t always vegetarian. But in the absence of cheese, you do need to get creative with your toppings. This recipe uses broccoli and potatoes … which aren’t things you’d expect on pizza. Caramelized onions help bring out the sweet spot, while the starchy Yukon potatoes will help simulate that cheesy color and texture without triggering allergies. 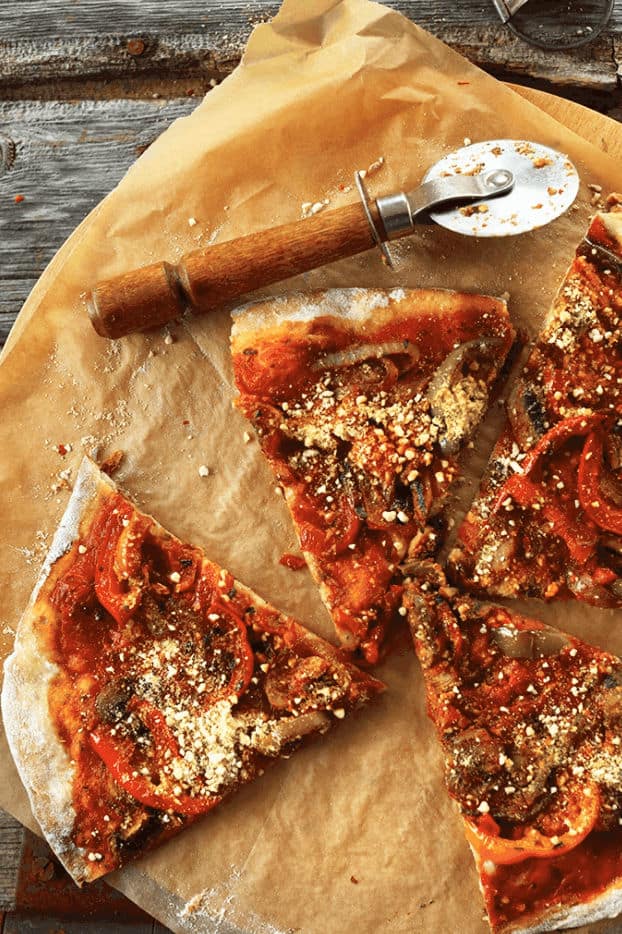 Vegetarians have a no-kill approach to life, so they stick with plant-based food. But vegans stretch that to ‘no creature cruelty) so they’ll swear off leather, dairy, honey, and even silk.his recipe uses vegan parmesan – a pulsed blend of cashews, yeast, garlic powder, and sea salt. For toppings, use multi-colored capsicum and mushrooms. Sauté them first before layering.

If you don’t have an oven, you can use the metal rack in your microwave. Place it in a saucepan, put the pizza baking tray on the rack, cover the saucepan with a lid, and cook your pizza that way. This recipe has no oven, no mayo, no cheese, no yeast, and no meat. Toppings include colored capsicum (red + green), onions, and sweetcorn laid on a sweet red sauce. 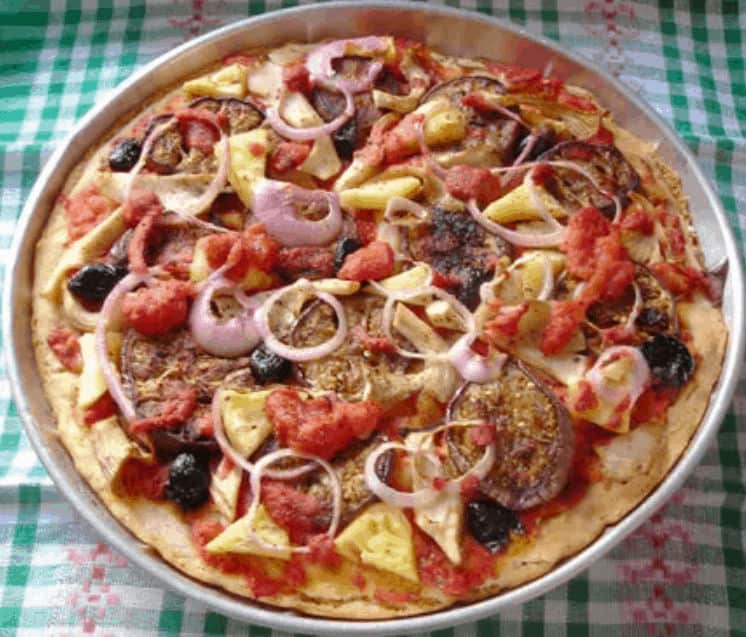 Some cheeseless pizza recipes still have lactose because they bake curd or yogurt into the dough. Others may use milk-based white sauces. So if you’re dodging dairy for ethical reasons (or dietary ones), be sure your recipe has zero mammal products. This recipe here uses pineapple, mushroom, aubergine, black bean sauce, and olives on a bed of marinara.

When your recipe was written by a trained nutritionist, you know it will be both healthy and flavourful. And while Michelle is holistic in her brand, she’s not above irreverence, so she’s fun to cook with. She uses a buttery oil-based spread (as opposed to butter, which is dairy and therefore not vegan). The pizza sauce is mainly tomato paste, garlic, and red pepper. 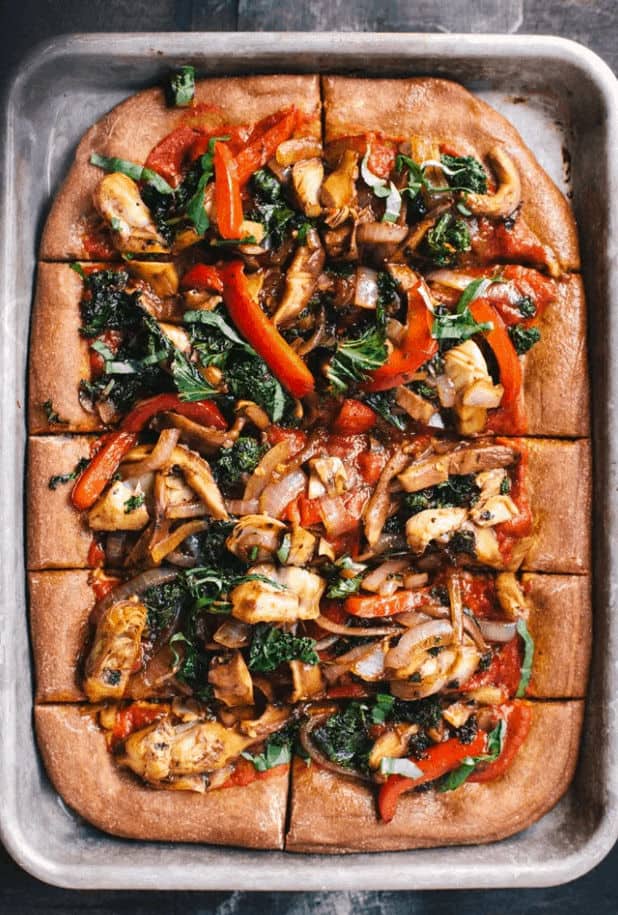 If you’re into artisanal pizza toppings, you will love this roasted veggie pizza. The veggies are pre-roasted to give them that smoky flavor before laying them out on oblong pizza dough. They include kale, mushrooms, bell peppers, artichokes, and sweet onions. For the quickest cook time, use canned veggies, canned pizza sauce, and store-bought pizza dough.

Be careful with this pizza – the toppings are cheeseless but the sauce is super cheesy so if you’re vetoing the dairy, don’t use the eggy sauce in the recipe. Use a makeshift white sauce instead, especially if you can stand milk, butter, or yogurt since these are still dairy but they’re not quite cheese. Pre-cook the chicken and veggies before topping and baking. 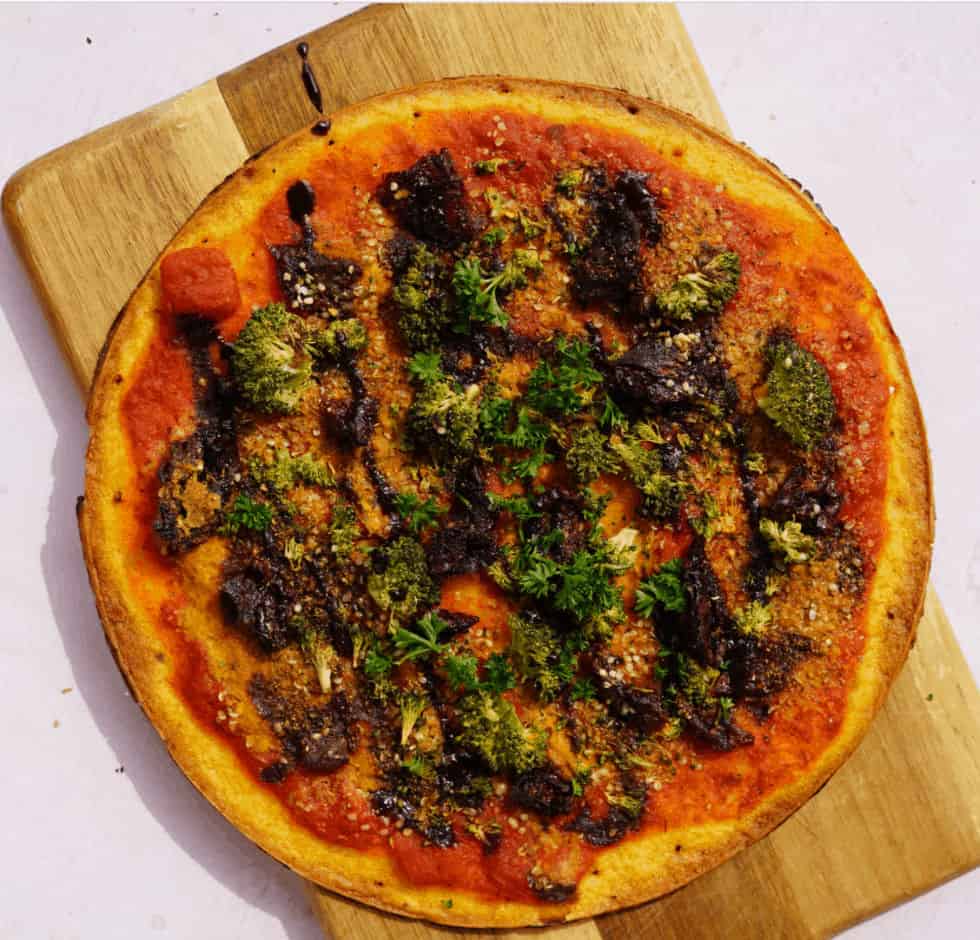 Some cheeseless pizza recipes use white sauce to replace cheese. Others leave out the sauce altogether, placing their toppings on naked dough sprinkled with oil. This vegan version has a sweet potato crust topped with sundried tomatoes and broccoli. It also uses hemp hearts, which are hemp seeds that have a distinctly nutty flavor. Don’t worry, they won’t you high.

If a recipe is marked vegan, it’s probably cheeseless. If your diet is protein-leaning, use ‘strong flour’ or bread flour because they have higher protein (and gluten) content. Fortify the dough with herbs e.g. wild garlic, fresh oregano, rosemary, or thyme. Bloom the yeast with a liquid sweetener. Top with bell peppers, sweet potato, pine nuts, and two pestos. 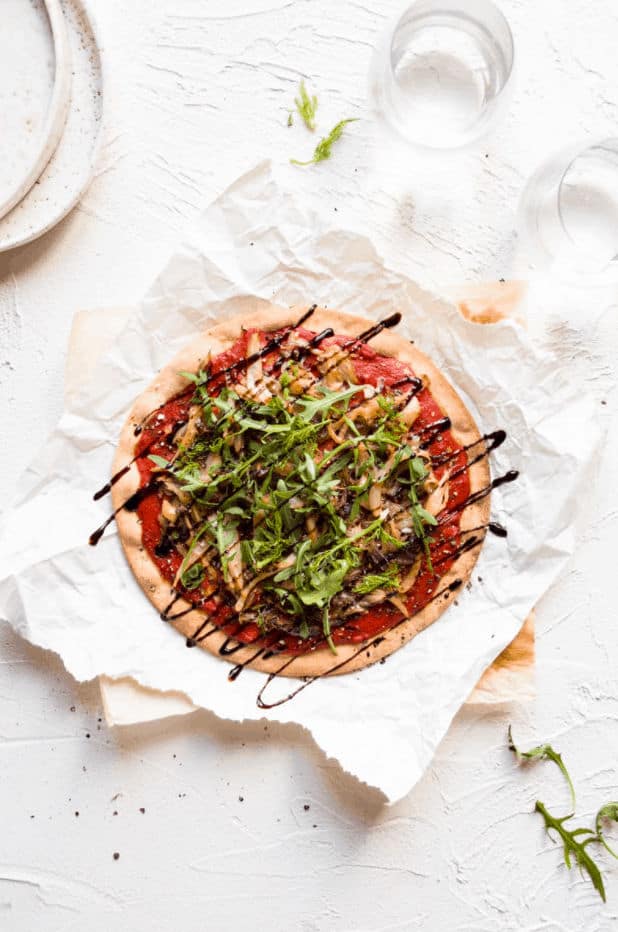 We’ve all heard about caramelized onion … but caramelized fennel? On cheeseless pizza? Let’s take a look. The fennel is cooked in olive oil with the onion until they’re sweet and syrupy. Top the pizza with tomato sauce and fresh spring vegetables (arugula works). Drizzle with balsamic sauce or vinegar and garnish with green sprigs of parsley or cilantro.

No cheese, no cream, no mayo, no yeast, no oven … what exactly does this pizza have? A pretty face and lots of flavor, that’s what! The thick white sauce and colorful toppings make it a treat for your plate and your palate. But like many South Asian pizza recipes, the dough has curd in it, so heads up! And the white sauce has milk so expect dairy triggers. 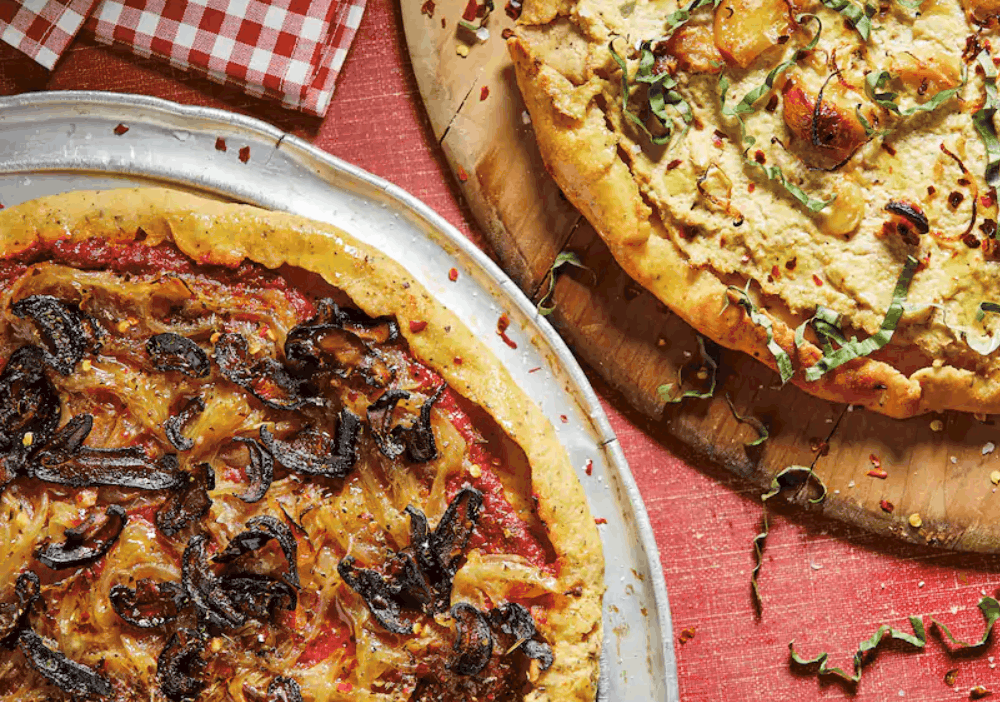 Cheeseless pizza recipes are often ‘pink pizzas’. They use both red and white sauces. The red sauce is your typical pizza marinara while the white sauce replaces cheese at the top of the pizza. But this white pizza uses tofu ricotta with parsley, artichoke hearts, and roasted garlic. Combine them in a blender and spread over herbed dough. Bake, garnish, cool, and serve.

Many indigenous communities bake in a cooking pot (low heat) half-filled with sand. The modern version uses a pan half-full of salt or sand for even heat distribution. The audio here isn’t English, but the ingredients and directions are, so you can mute it and still follow along. The white sauce has milk and butter. Top with olives, mushrooms, capsicum, and tomatoes. 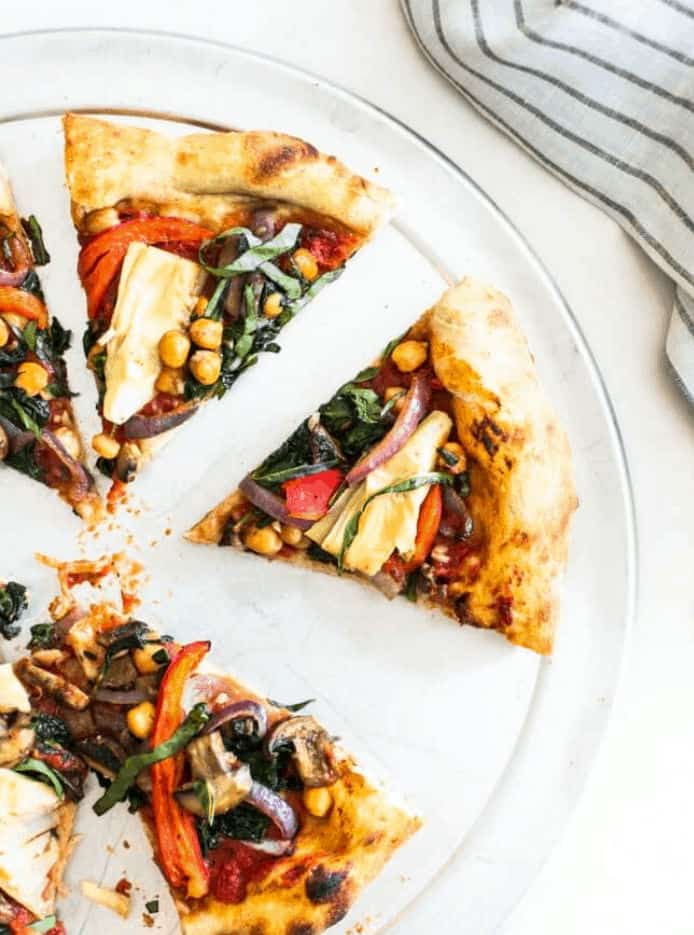 According to this cooking couple, the secret to cheeseless pizza recipes is to use ‘meaty vegan’ toppings with that distinct umami flavor. These ‘meaty veggies’ include artichokes and mushrooms, and this recipe has both. It also has spinach, chickpeas, sweet potatoes (or squash), olives, brussels sprouts, and chili. Use fire-roasted tomatoes for enriched marinara.

We’ve met vegan parmesan (cashews and yeast with garlic powder). Now meet nut-free vegan mozzarella (cauliflower, tapioca flour, yeast, non-dairy milk). Put boiled cauliflower in a blender with tapioca flour, yeast, and milk – can be almond, rice, or soy milk, depending on your preference. Simmer and stir on medium heat, slather it on the dough, and add toppings. 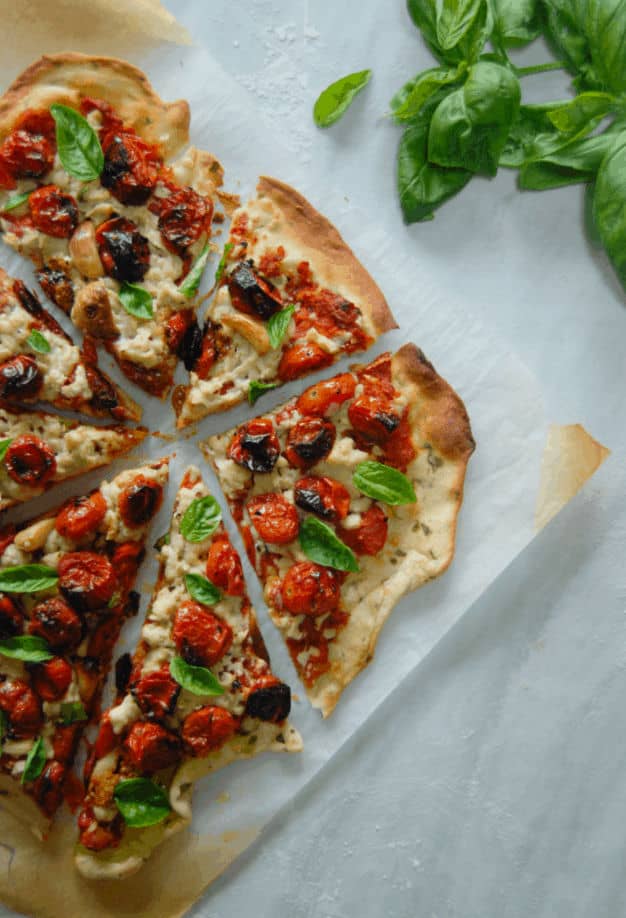 If you’re not putting cheese on your pizza, you need some kind of white sauce or cheese substitute. This recipe uses vegan cheese and vegan yogurt so you can enjoy that ooey-gooey goodness without compromising your principles or triggering your allergies. This version works with a smoky chipotle tomato sauce. The ‘cheese’ has cashewgurt, miso, and tapioca. 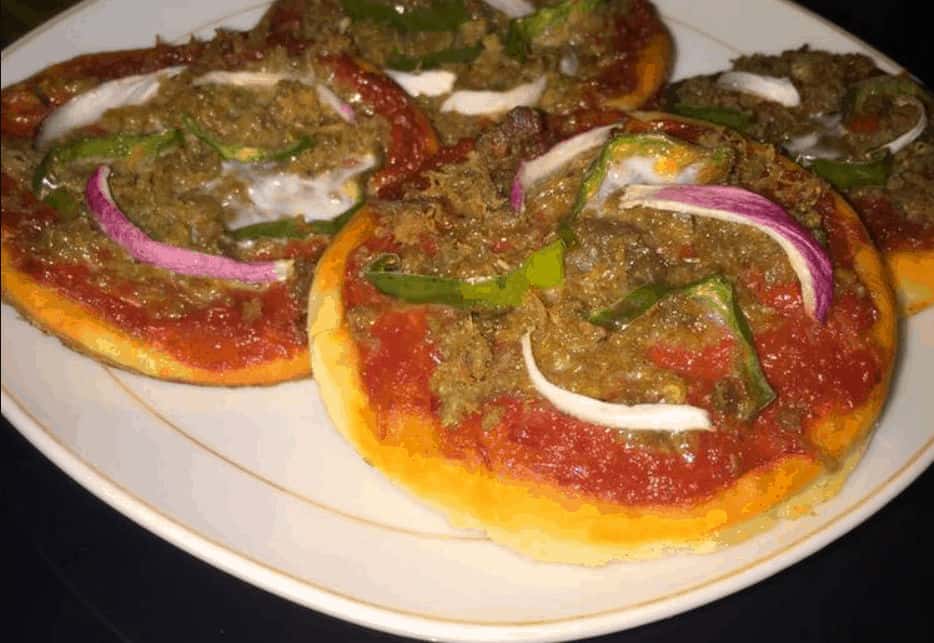 Sometimes the pizza is so good you want to eat the whole thing! So try baking mini pizzas so you can scarf them down guilt-free. This recipe makes a red pizza sauce and a ground beef stew. The dough is topped with pizza sauce (with scotch bonnet chili) and meaty stew before baking. Be sure your sauce and stew aren’t too liquid. Otherwise, your pizza will get soggy.

Indian pizzas are sometimes cooked in a kadai (wok) or tawa (saucepan). They also use lots of garlic – sometimes up to 20 cloves. Here, Hebbar’s dough has sugar, buttermilk, butter, baking soda, and baking powder, but no yeast. The white sauce cheese substitute uses butter, milk, eggless mayonnaise, and flour. And the marinara has lots of chili sauce mixed in. 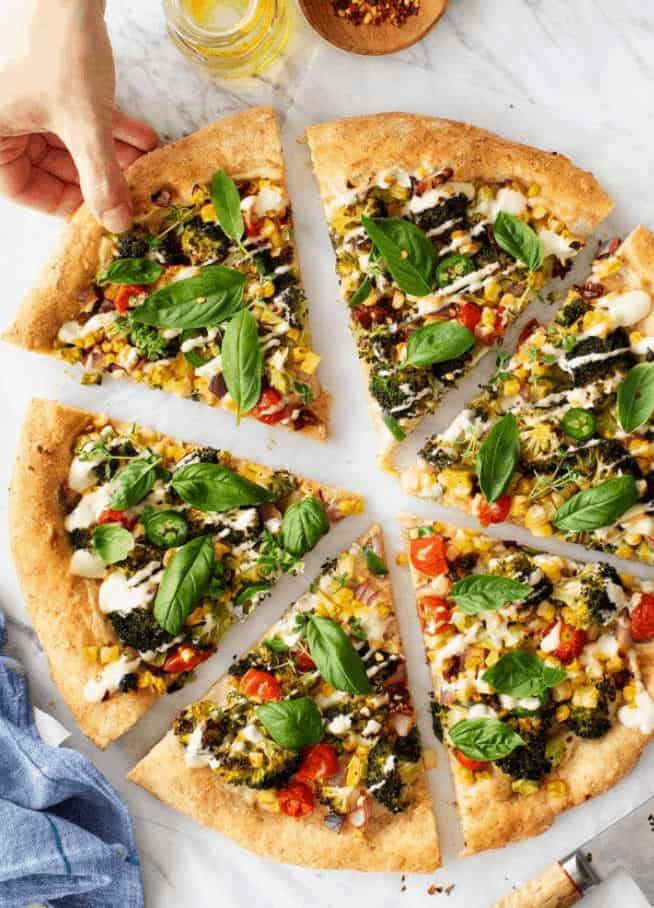 Cashews are a common substitute for cheese. But only if you’re safe from nut allergies. This cheeseless pizza uses a white cashew sauce and rich veggie toppings that include broccoli, basil, sweetcorn, and jalapenos. You could also toss in a mix of tomatoes (cherries and sun-dried). To make cashew cream, blend raw cashews with water, oil, garlic, and lemon juice.

We’ve seen several cheeseless pizza recipes with chicken toppings. But this gluten-free version has a masa and chickpea base (made of chickpea flour). The toppings are shredded zucchini, mushrooms, olives, and onions. Cook the mushrooms and fennel seeds for about 5 minutes before topping. Shredded yellow squash is also a handy substitute for cheese. 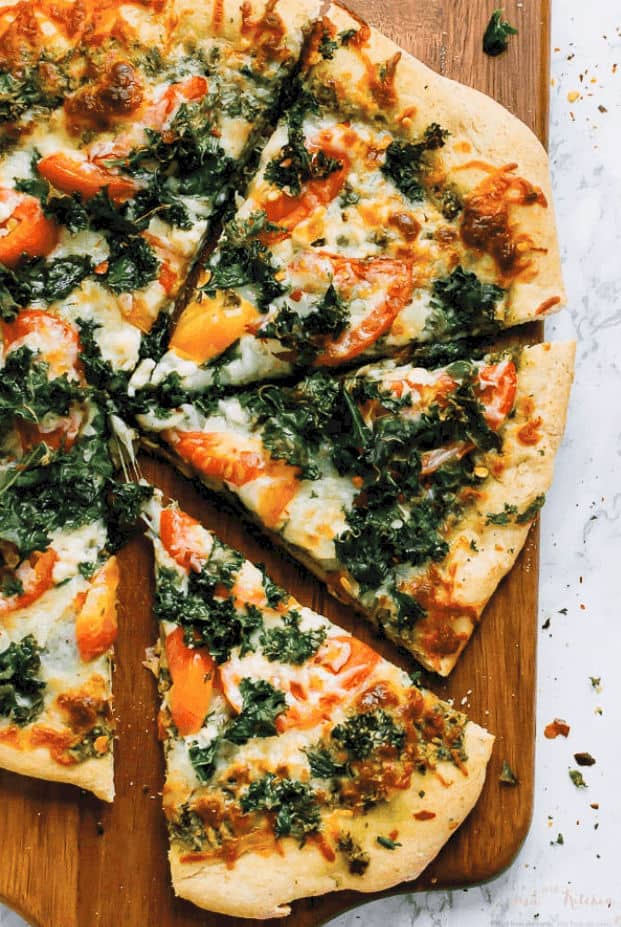 When you go off cheese – pun intended – you have two options. You can cook with a cheeseless white sauce (which may still contain dairy). Or you can make vegan cheese. This cheeseless pizza recipe blends pecans and kale into pesto, then adds vegan mozzarella on a thin, crunchy crust. If you don’t like pecans, swap with pine nuts, walnuts, or pistachios.

Family pizza can be tricky if everyone has different tastes. So try this video with its three versions. All three are gluten-free because the dough uses almond and quinoa flour as a base. The vegan toppings include mushroom and colored capsicum for Pizza #1; asparagus, arugula, peas, and pesto for Pizza #2; or spinach and squash/pumpkin puree for Pizza #3. 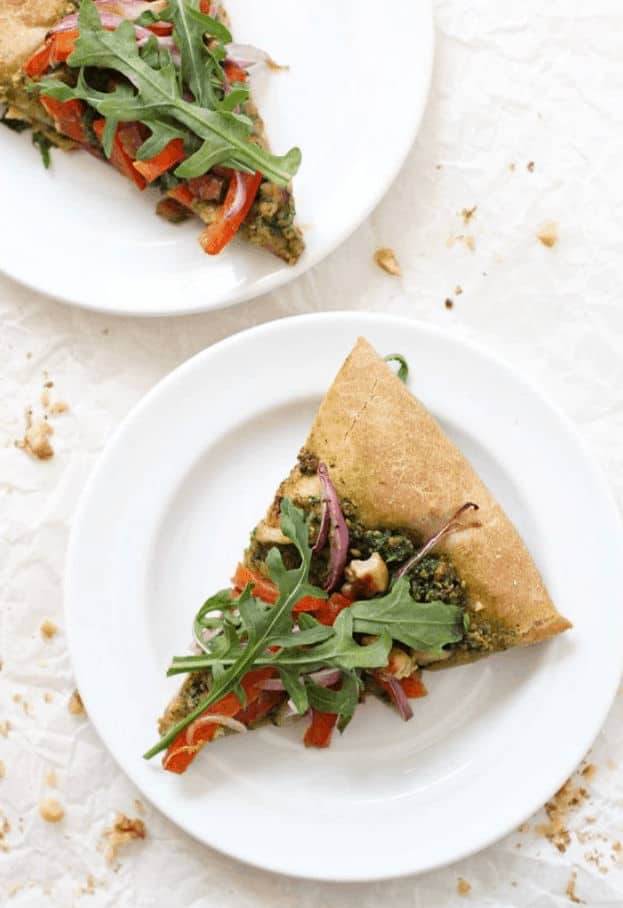 So far, almost every cheeseless pizza recipe we’ve looked at had some dairy. This one doesn’t. Instead of milky (or buttery) white sauce, this killer pizza is built off arugula pesto. You can also add sunflower seeds, spinach, yeast, and garlic to your blended pesto. Sprinkle chopped walnuts over the pesto then follow with red onion, multi-colored bell peppers, and greens.

Yes, there’s cheese in this one. But it’s vegan mozzarella made with cashews, so you’re safe. This vegan cheese also incorporates maple syrup, coconut oil, yeast, lemon juice, agar, and tapioca. It’s a complex white sauce so the pizza uses simple toppings to avoid drowning out this makeshift mozzarella. Make the dough, spread the cheese, bake, and garnish with basil. 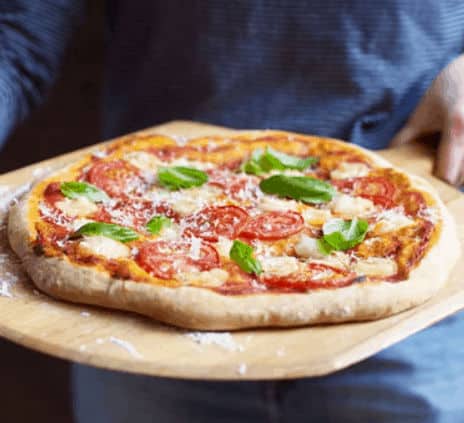 We’ve seen lots of recipes for vegan cheese, but it was mostly oozy white sauce. This cheeseless pizza recipe gives us shredded vegan mozzarella so let’s give that a try. You’ll have to use the store-bought type, but check the ingredients to be sure it has no dairy or other animal products. Use passata, fresh basil, and crushed garlic for the red pizza sauce.

Let’s try a vegan pizza with some twin melanin. It uses store-bought vegan pizza – preferable provolone or mozzarella. And the dough has agave and pink salt, plus non-dairy milk and non-dairy butter. For toppings, it’s shredded vegan mozzarella directly on the naked crust, various veggies (capsicum and onion), and red pizza sauce with vegan parmesan on top. 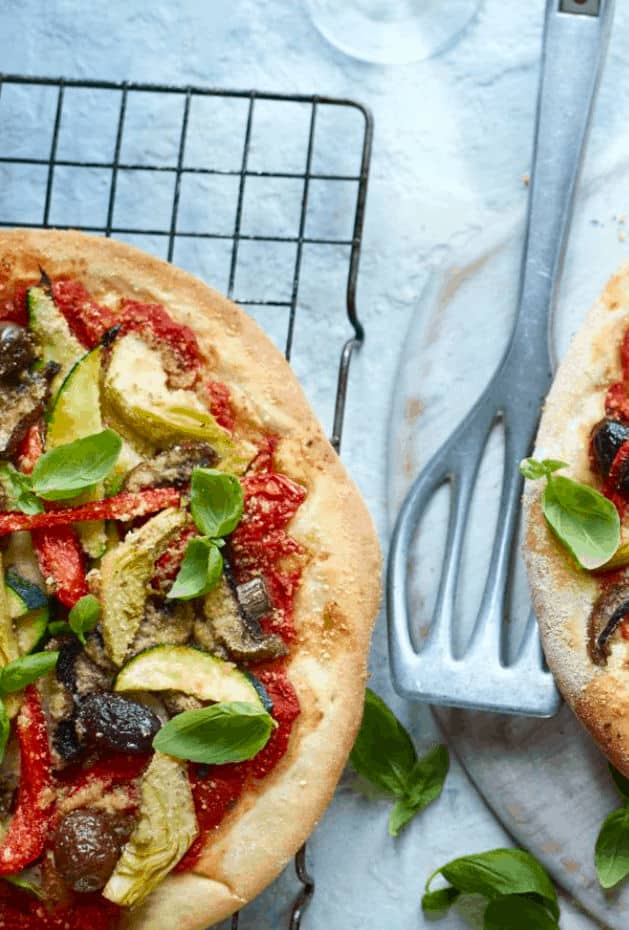 We’ll finish with another BBC recipe from across the pond. There’s not an ounce of cheese on this one. The toppings include artichoke hearts, seedless colored peppers, ground almonds, chestnut mushrooms, black olives, courgettes, and fresh basil. And the red sauce is super simple – chopped tomatoes cooked on high with onions, garlic, salt, pepper, and oregano.

What’s your favorite cheeseless pizza recipe? Tell us how to make it in the comments!