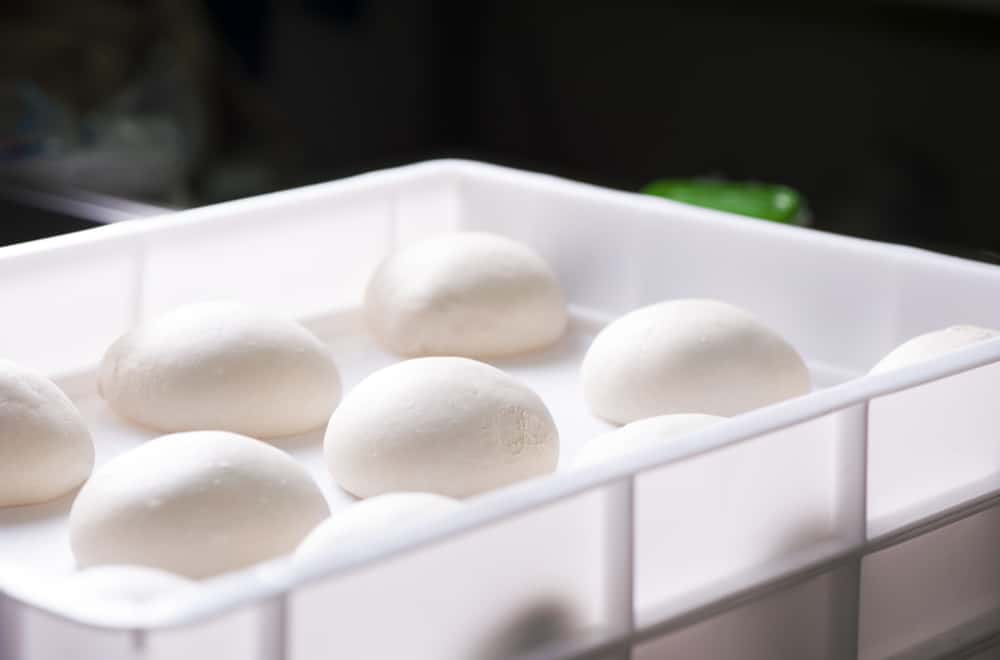 Getting your dough perfect is perhaps the single most important part of baking a great pizza at home. But if you store it properly, you won’t need to make a fresh batch every time you want a pie. 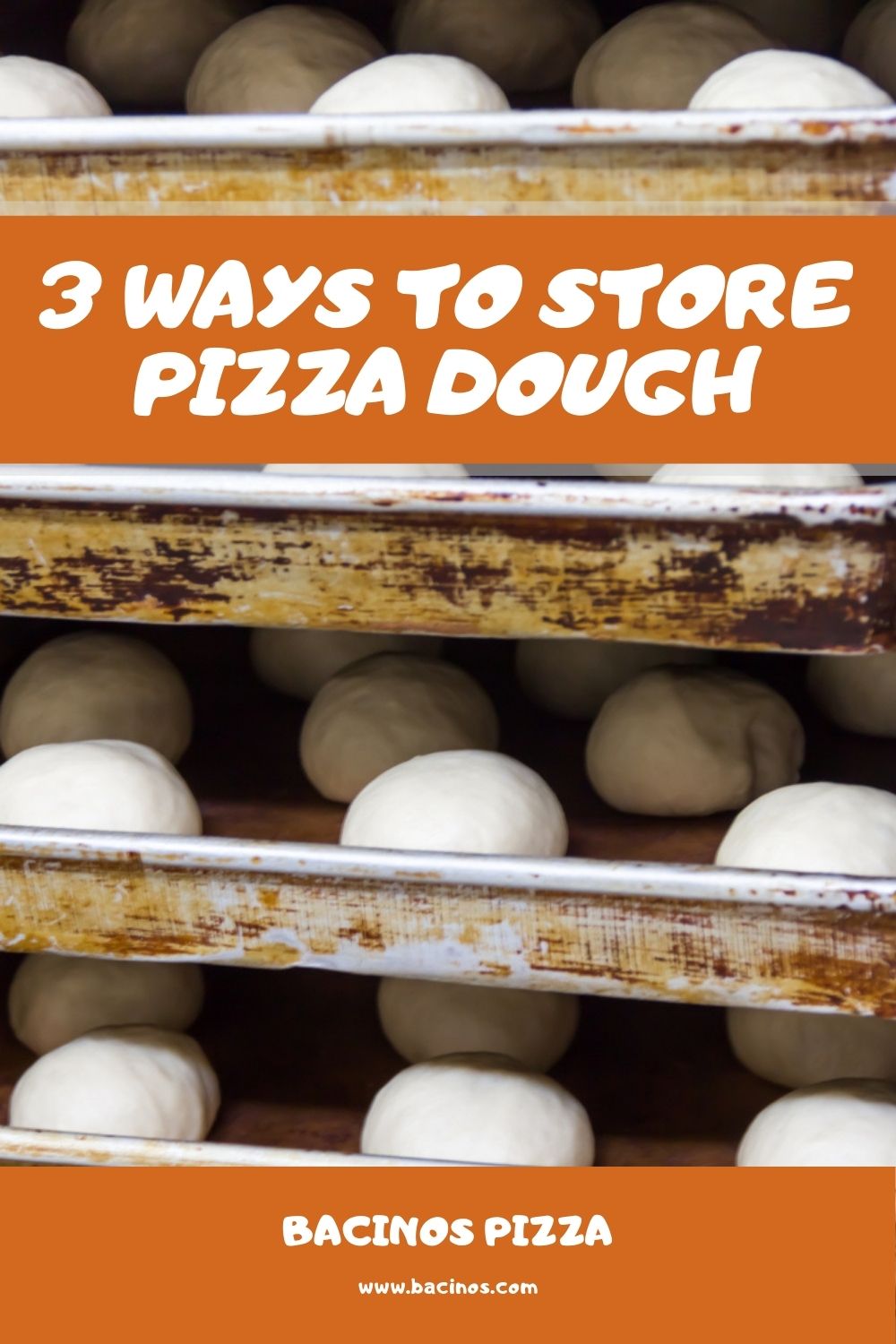 The key word here, though, is “properly”! Pizza dough that isn’t stored as it should be can become stale, soggy or just lacklustre. But if you’re not sure how to store pizza dough – we’re here to help!

We’re going to take you through everything you need to know to keep your dough in tip-top condition. And we’ll share some tips to get great results when you come to bake it.

So if you’re ready, let’s get started! 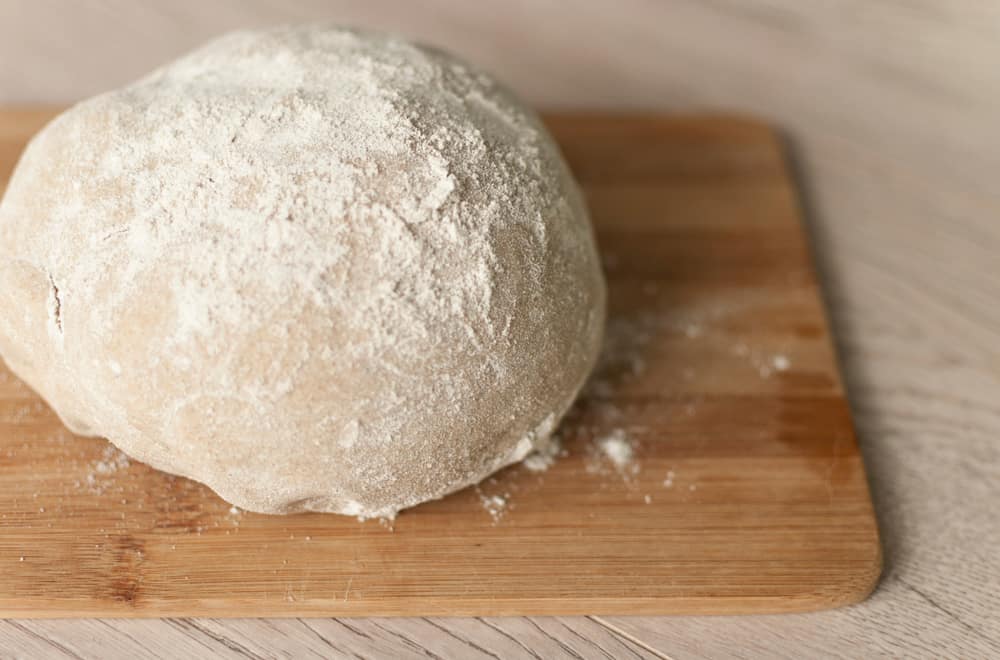 The reason pizza dough needs to be stored with care is that it contains yeast. And that can be rather demanding about the conditions in which it’s kept.

When it’s in a warm place, yeast is more active. That means that, as long as it has sugars to feed on, it will keep fermenting. Reduce the temperature and it will calm down. But if it’s too hot, it will die.

But once you’ve got your dough, you’ll already have activated the yeast. The task now is to keep it stable. And for longer periods of time, that’s best done by putting it into a cold environment – i.e. a refrigerator.

What happens if your dough isn’t stored correctly? 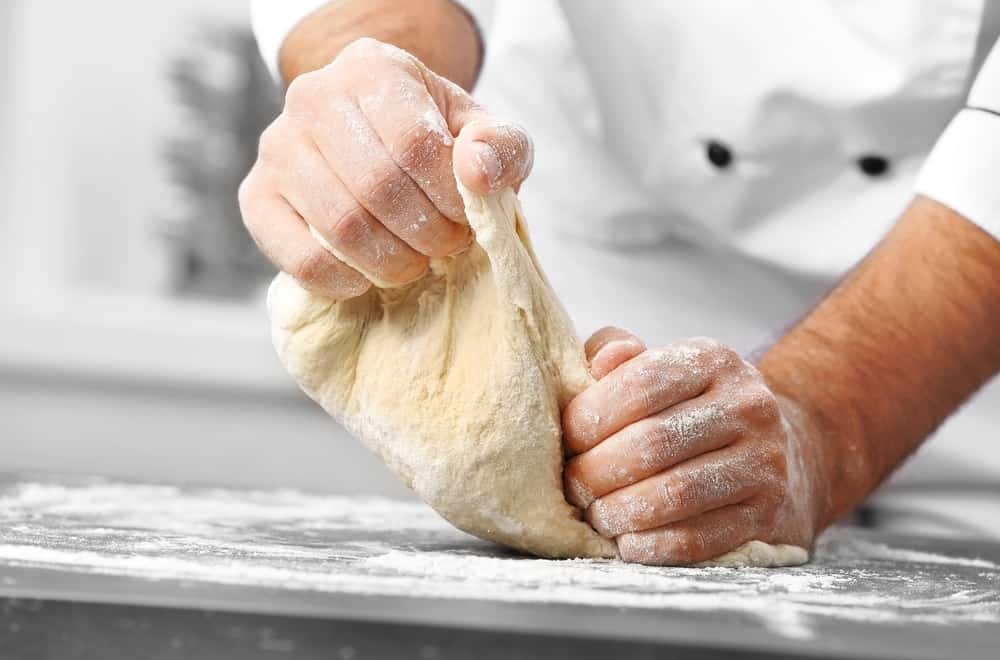 If your dough is stored somewhere that’s too warm, your yeast will keep fermenting. And then it will start to die. That will result in a pizza crust that’s tough and chewy. And it won’t taste very nice either.

This process is known as over-proofing. This happens because the surface of your dough is permeable to gases. During fermentation the yeast produces gases – these are what cause the dough to rise. But the gas escapes from the dough surface too.

If it’s left for too long, the yeast won’t keep producing enough gas to replace that which is being lost. That will cause your dough to lose its structure.

You won’t get ill if you eat dough that’s been allowed to get into this condition. But the texture of your pizza crust will suffer. And you may get some unpleasant flavors too.

Where should you store your pizza Dough? 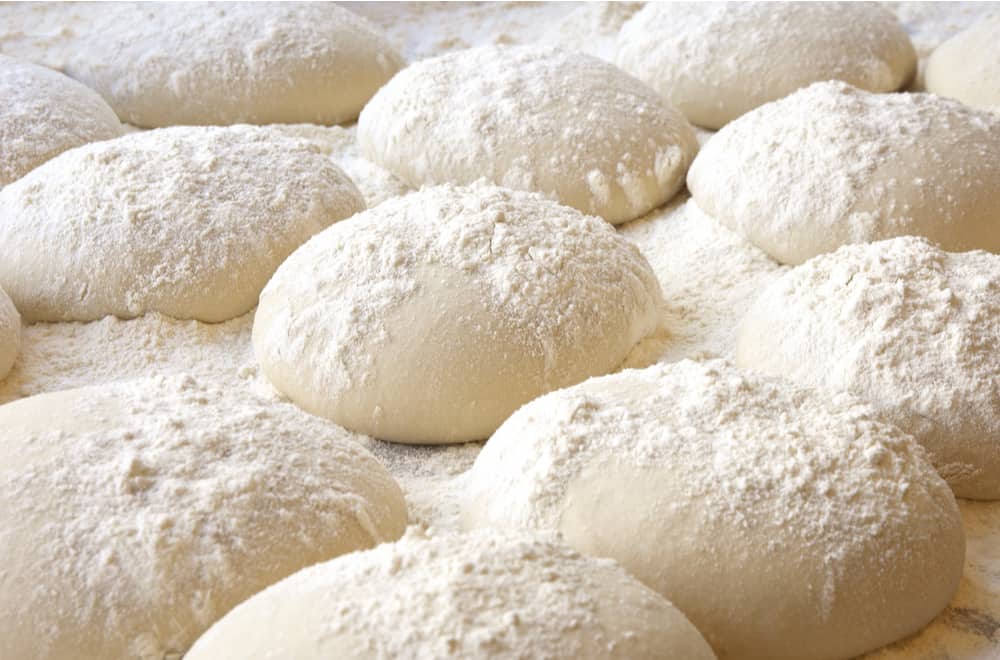 If you only need to store your pizza for a short time, you can keep it on the countertop. The exact time it will keep for will depend on the amount of yeast it contains. Dough with lower levels of yeast will last longer without going off than dough with more yeast.

Standard pizza doughs will generally be fine stored at room temperature for up to four hours. If you’re using a dough with less yeast, as for a Neapolitan pizza, it can last for up to twenty-four hours.

Any longer than this, though, and you should store the dough in your refrigerator. This will slow down fermentation, but won’t stop it altogether.

You can use dough that’s been stored in a refrigerator for as long as two weeks. But if you’re expecting it to be more than a week before you use it, freezing it is a better option. That will stop fermentation in its tracks. As a result, you can leave your dough for as long as three months before using it.

Method 1. How to store your pizza dough at room temperature 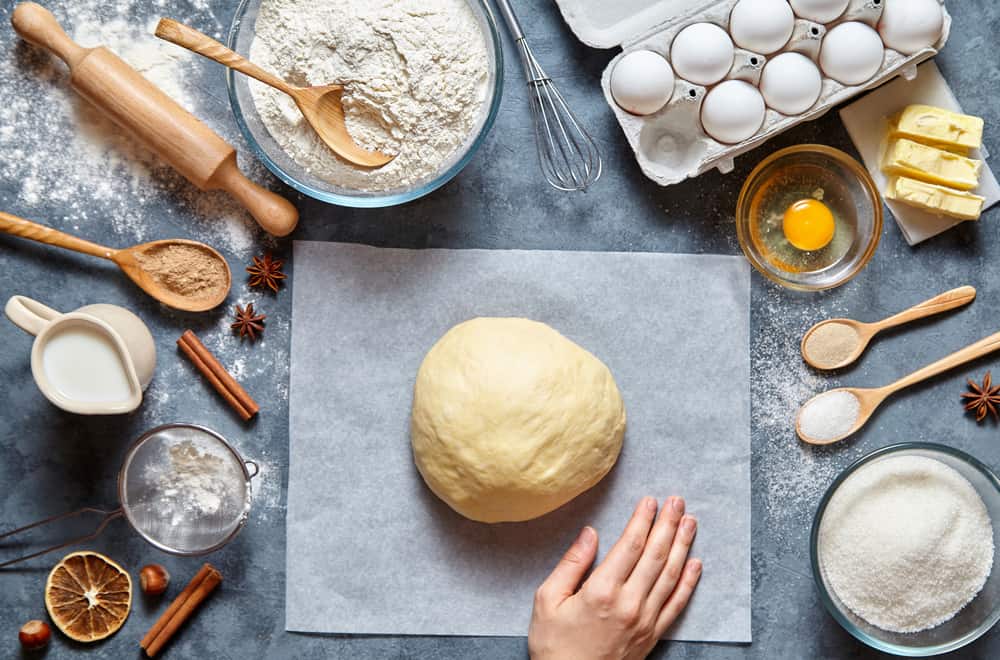 If you’re just storing your dough for a few hours on the worktop, here’s how to keep it in good condition.

Ideally, you want a container with an airtight lid. But if you don’t have one, don’t worry. A layer of plastic wrap stretched over the surface will work just as well.

Brush the inside of the container with a thin coating of olive oil. That will help keep the surface of the dough moist. And it will also keep it from sticking to the container when you’re ready to use it.

Then pop on the lid, or stretch over your plastic wrap. That will create a stable environment for your dough until you’re ready to use it.

Method 2. How to store your pizza dough in the fridge

Leave your pizza dough at room temperature for between one and two hours. The split it into portions, one for each pizza, so it’s ready to go into the fridge.

The rest of the process is the same as for storing your pizza dough on the worktop. Brush the inside of a container with olive oil, then snap on the airtight lid. And if you don’t have one of those, seal the top with plastic wrap instead.

When you’re ready to use your dough, you’ll need to give it time to return to room temperature. For a half-pound ball of dough, that will take about 30 minutes. So remember to take it out of the fridge half an hour before you want to start baking.

You can now use it just as you would if it were freshly made.

Method 3. How to store your pizza dough in the freezer

The process for storing your dough in the freezer is very similar to that for the fridge. Leave it for a couple of hours at room temperature, before dividing it into individual portions. Then place it in a container that won’t let in any air.

Ziplock bags are a particularly good choice for freezing dough. They’ll mold to the shape of your dough balls to take up minimal room in your freezer.

You can take out the dough on the day you want to use it. Simply leave it covered up on your worktop for between three and four hours. This will give it time to thaw, whilst keeping it protected. Once it’s at room temperature, it’s ready to be used.

If you want to, you can also defrost your dough more gradually by leaving it overnight in your fridge. Just remember you’ll need to give it time to come to room temperature before using it.

Get the best pizza crust with careful measuring 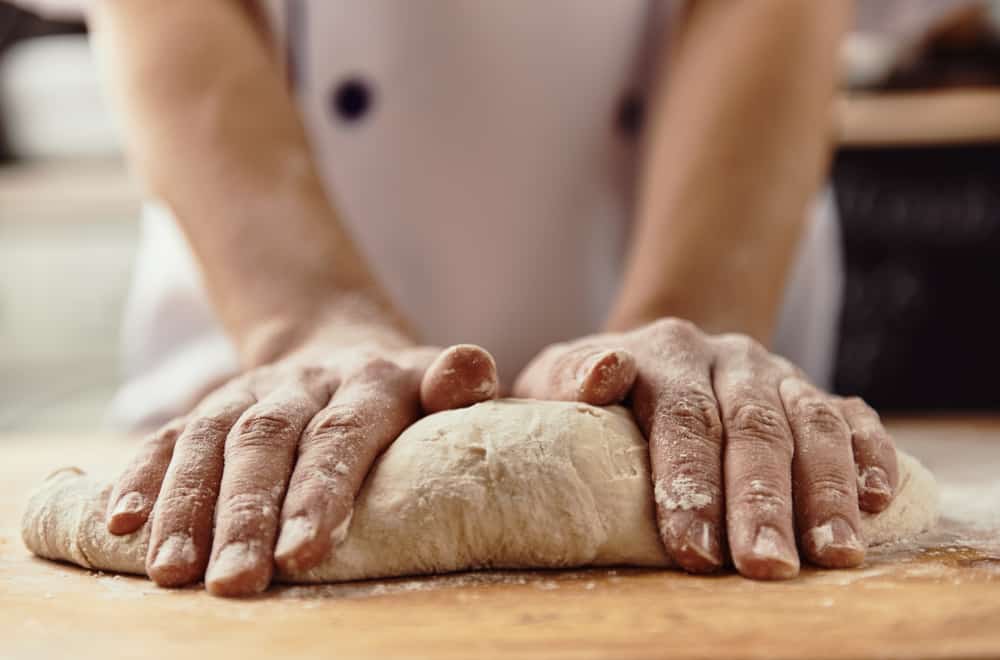 Now you know how to store dough so that it keeps fresh until it’s ready to be used. But we’ve also got some other hints and tips to help you get the perfect pizza crust.

The first is to measure out your ingredients carefully. That means weighing them, rather than measuring them by volume.

However careful you are, “one cup” or “one teaspoon” of anything will vary slightly every time it’s filled. And ingredients like flour can have more or less volume depending on how much air is present between the grains. So remove the guesswork by investing in some accurate kitchen scales instead.

It’s also a good idea to get your hands on a kitchen thermometer. We’ve already seen that the key to fermenting yeast is getting the temperature of the water in your dough just right. Over time, you’ll be able to tell that by touch. But when you’re starting out, a thermometer is invaluable.

Choose your flour with care

It’s possible to make pizza with plain flour, but you’ll get a better texture with bread flour. This is because it’s higher in protein. And the more protein there is in your flour, the more bubbles of air it will create in your pizza crust. That will give you a lighter, crispier texture.

This kind of flour is also called strong or extra strong flour. It’s made from hard wheat grains, which are the type that have the most protein. Compared to standard all-purpose flour, it feels slightly more coarse, and has a less white color.

Storing your pizza dough in the fridge can help develop its flavor. To do this, you’ll want to keep the dough there for between three and five days.

This will slow down the rate at which the yeast digests carbohydrates. This gives your crust a better flavor and an attractive golden color as it bakes.

Just follow the instructions above for storing your dough in the fridge. And don’t forget to give it time to return to room temperature before you use it.

If you want to use a rolling pin – do it!

The conventional wisdom is not to let a rolling pin anywhere near your pizza dough. The pin, goes the story, will press out all the gas and leave you with a dense, tough crust.

The alternative, though, still involves pressing down on the pizza dough – just with your fingers instead. If you’re in a hurry and it’s all too much fuss, a light roll with a rolling pin won’t be the end of the world. And it might just save your sanity!

Time to bake the perfect pizza!

We hope you’ve enjoyed our guide to how to store pizza dough. Whether you need to keep it for a few hours between batches, or for several weeks, there’s a simple solution. Just pick the right form of storage for your needs, and you’re sure to get great results.

And when it comes to making your dough in the first place, weigh your ingredients. Then check the temperature of your water for perfect fermentation. And make sure you use strong bread flour for a light and crispy texture.

Good luck with your next pizza! 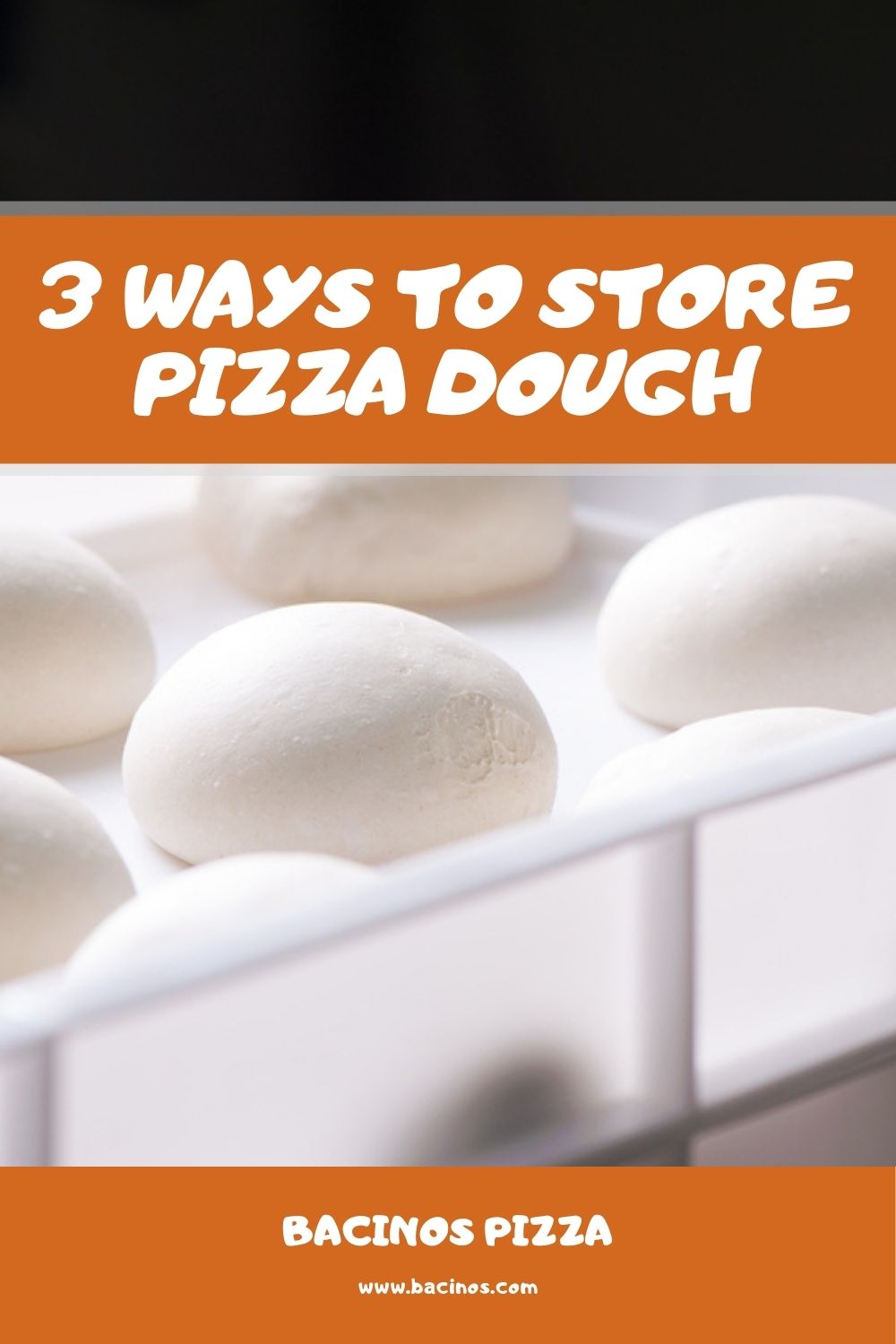 How to Use a Pizza Stone On a Grill?

What is Brooklyn-Style Pizza? (Why It’s So Different?)

How to Use a Pizza Stone?

History of Pizza: Where, When & Who Invented Pizza