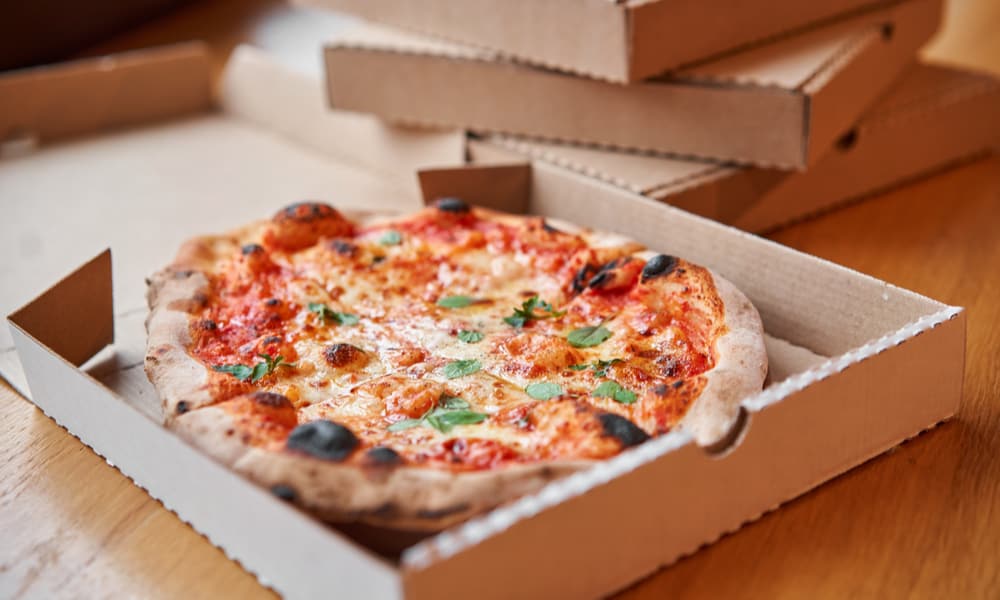 Did you know you could use the sun’s energy to heat tasty treats for your kids? Or, for yourself! I mean, who could say no to delicious molten s’mores, right? 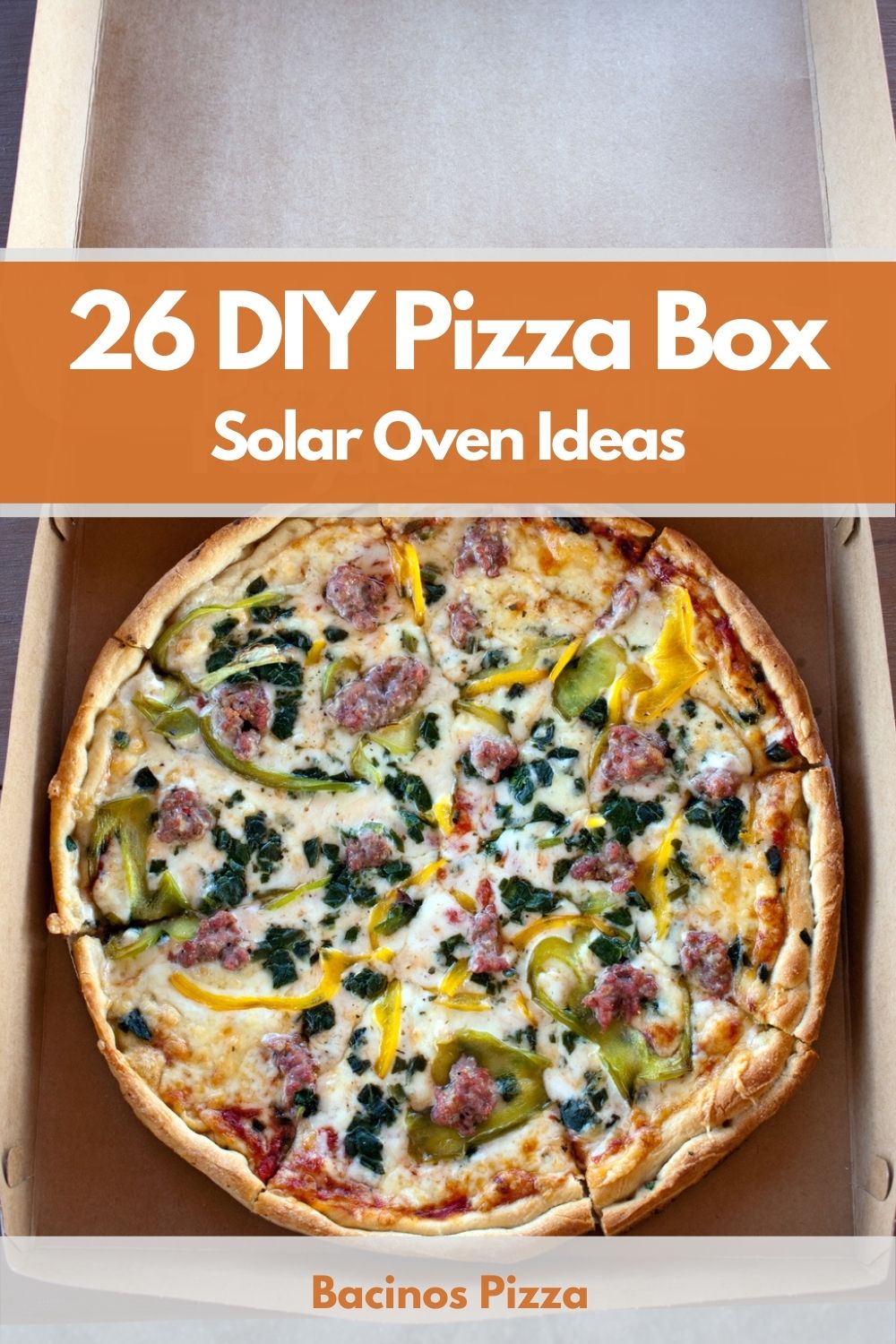 If you have a pizza box, or any cardboard box, and a few stationery items, you can DIY a great solar oven. Just imagine the satisfaction of eating something cooked in an oven you actually made!

Ms. Kerri, the Health Programs Manager for Girls Scout of Eastern Missouri, leads Girl Scouts juniors through steps of the Eco Camper Badge #2, where she teaches them how to make a solar oven out of a pizza box.

If you’re up for this DIY, you can find all the supplies she has used in the description section of the video.

2. How To Make a DIY Solar Oven 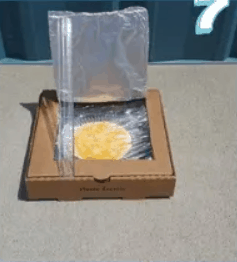 If you have crafty hands, you can make a pizza box solar oven cooker in minutes. This written tutorial by HOME SCIENCE TOOLS is very easy to follow along.

In case you’re interested, this site has plenty of such crafty science DIYs. Also, if you are wondering what you can cook in your pizza box solar oven, you can find a few recipes here.

3. How to Turn a Pizza Box into a Solar Oven

The Youtuber from Howcast says, “ Save that last slice of pizza! You can reheat in its own container, using the sun’s power.” And she’s absolutely right!

Watch this short video without skipping and recycle your pizza box into a fantastic solar oven. And a brilliant tip – in order to find out the best angles of the sun for your oven, use a laser pointer! 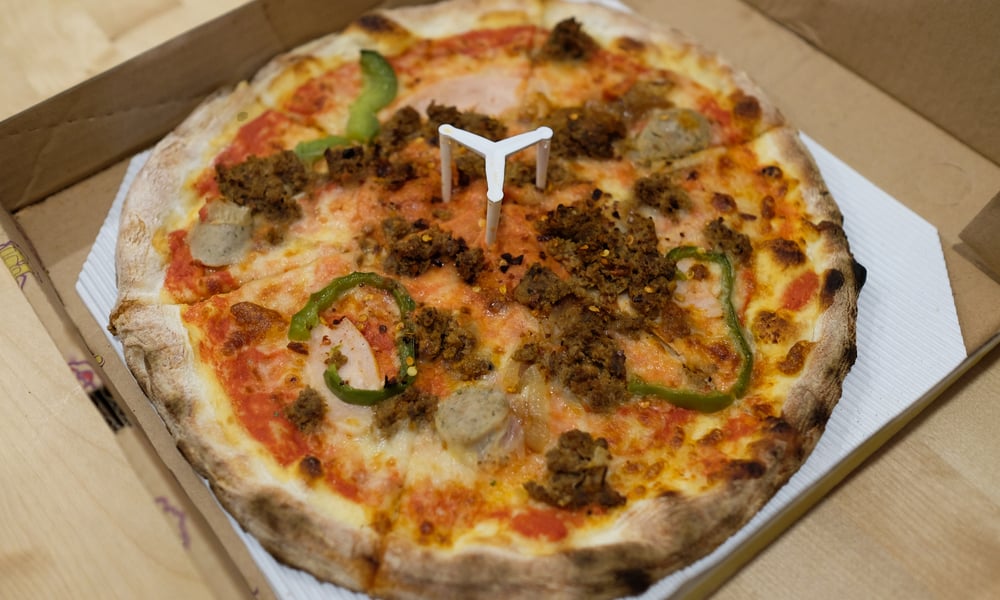 You don’t have to always burn wood or gas in order to cook outdoors and have fun! You can directly take help from your solar buddy for this purpose.

Yes, it might take a bit longer to heat the food, but the satisfaction of cooking in your self-made oven is insane! Follow this written tutorial by SCIENTIFIC AMERICAN to build one for yourself.

Though building a pizza box solar oven is easy and doesn’t involve using complicated tools, you must ask for adult supervision while cutting the box using a utility knife. Once you’re done making the oven, try cooking a few s’mores in it. You’d be proud of your achievement! 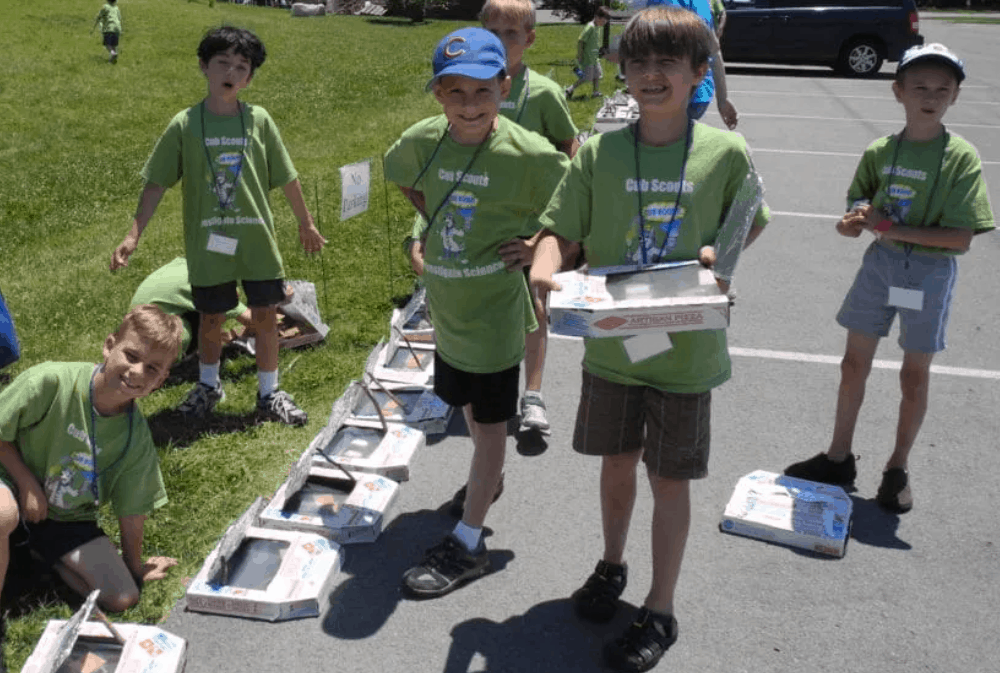 A pizza box solar oven makes a great project for kids as no other heat source besides solar energy is involved, making this project safe for kids. Follow along with this tutorial to build an innovative solar oven for yourself.

And, if you’ve decided to make s’mores in it, cut your big marshmallows pieces in half. The smaller the pieces, the quicker it melts!

In this video, the Youtuber from Kids Fun Science makes s’mores in two types of solar ovens; one made using a pizza box and the other in a deep cardboard box.

Once you know how to make the pizza box one, you can replicate the idea to make the deep cardboard box oven as well. The s’mores from both ovens turned out to be very gooey and tasty. Check them out! 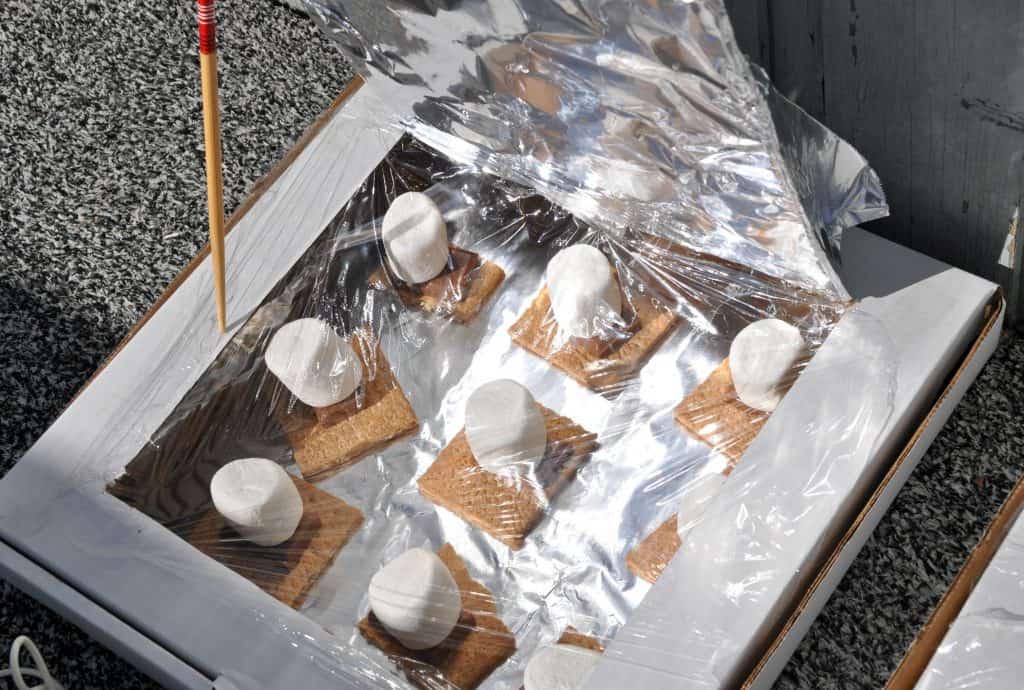 If you like s’mores just as this blogger and her kids do, you’ll love this solar oven tutorial by Them Them Outside. If you want to add a touch of science to your solar oven, you can experiment by making two; one with a black paper base as usual and the other with a white paper base.

You can then check the temperature difference between the two and the time required to melt the s’mores. If you have kids, they’d be excited to partake in this experiment!

Are you wondering why pizza boxes make a great solar oven? They are great thermal insulators, thus keeping the heat inside the oven.

If you involve kids in this project, they’ll learn how to make a solar oven, how it gains thermal energy, and how it cooks the food inside by the end of this short tutorial video.

10. How to Make a Pizza Box Solar Oven 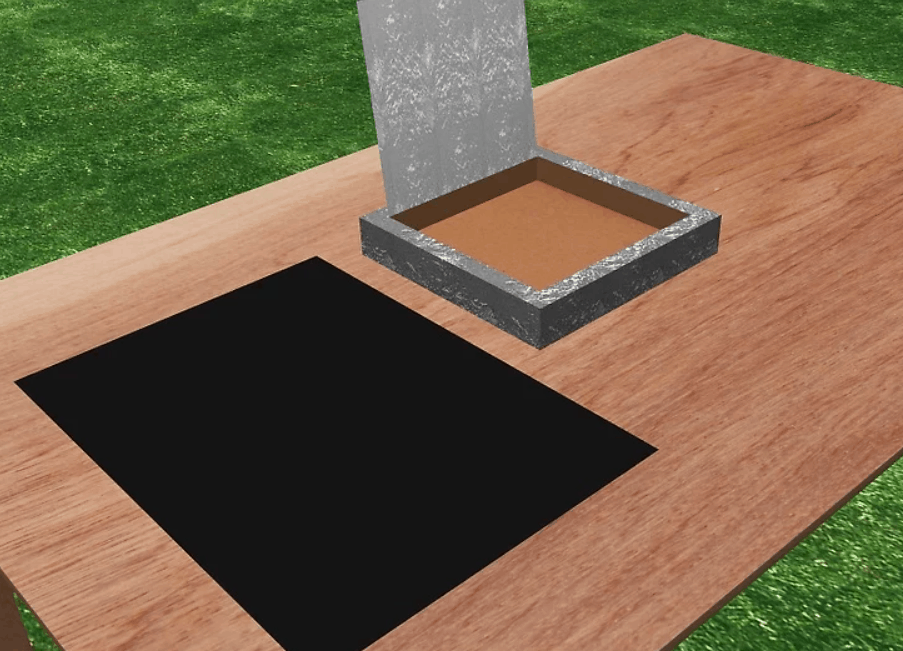 Once you’ve made your pizza box solar oven, feel free to reuse it as much as you like. Just put a new plastic wrap on and change the black paper on the base if necessary.

In this written tutorial by wikiHow, not only will you learn how to make a pizza oven, many of the queries has also been answered in the Questions & Answers section. Make sure to check them out!

This step-by-step tutorial video by Genesis involves two kids making the solar even out of a pizza box. If they can do it, anyone can!

However, this project must be done under adult supervision as it requires cutting the box. Also, they need help while positioning the oven in the sun. So, make sure you help the young ones out! 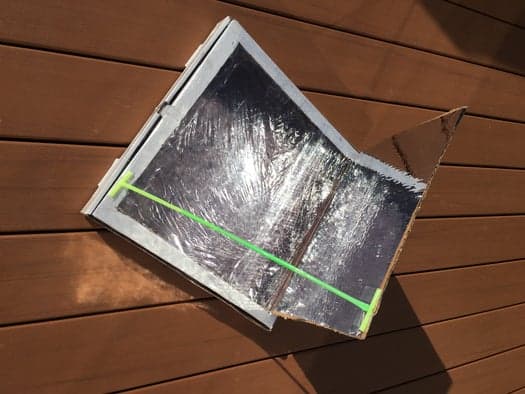 If none of these tutorials seem good enough for you, this elaborate tutorial is the one you should follow. The best part about this DIY is that the pizza box includes an in-built stand to keep the lid in place. How brilliant is that? Read the post thoroughly and see if you can replicate the design!

This entertaining tutorial video by Lincoln Hoppe not only teaches you to make a pizza box solar oven but also educates you on the scientific mechanism behind the oven. And don’t end up burning your mouth with hot just-molten s’mores as the Youtuber did. Always let your food cool! 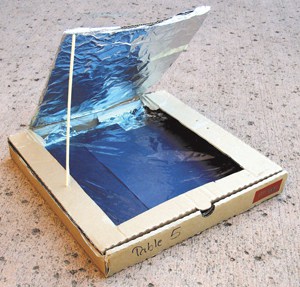 You no longer need to plan camping trips in order to enjoy some tasty s’mores. But, s’mores do hit different when made and eaten outdoors, don’t they? So, what do we do? Make a pizza box solar oven! Here’s an easy-to-follow written tutorial by the SAN DIEGO family for you!

Unlike most of the tutorials where they mostly put the black paper at the base of the pizza box, the Youtubers cover the entire base and the sides with black paper in this tutorial. They further stuff newspapers around the inside of the box for extra insulation. How creative is that?

However, they don’t use aluminum foil beneath the black paper at the base. We’d recommend you use it to make a better functioning oven. 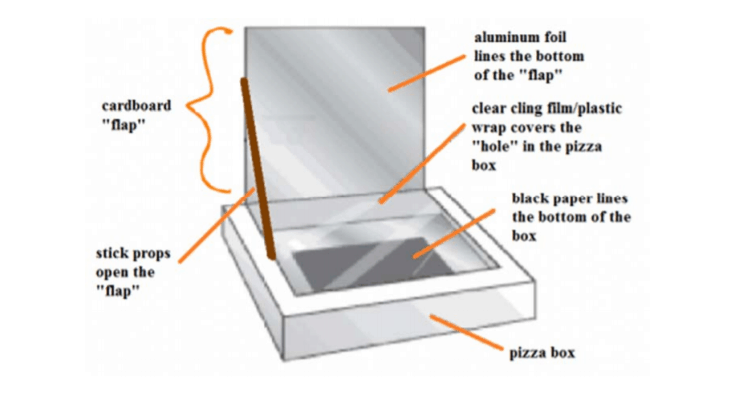 Are you looking for an idea for your next science project? Pizza box solar oven to your rescue! Before starting on the actual DIY, make sure you read this entire pdf beforehand.

You can find a lot of science and history behind the solar oven in this pdf. With all this knowledge and an excellent science project, you’re bound to get that A+!

Ryan wanted to go camping to make some s’mores. But alas! He had to wait for the weekends to make that happen. To his rescue, Combo and Berrie made him some s’mores in a pizza box solar oven. Watch this video to find out how! 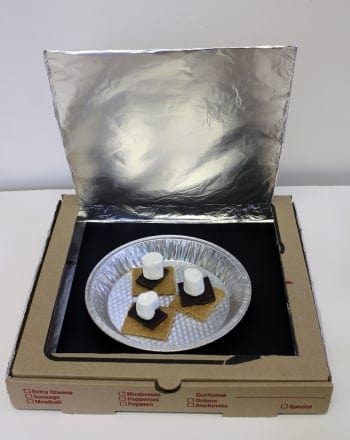 For all those science nerds out there who want to learn the mechanism before starting on the actual project, this tutorial is for you. Learn how the oven works, how the thermal energy is created, and how to insulate your pizza box solar oven properly in this blog.

In this episode by Urban Homestead, Anais, a member of a Pasadena family, shows the viewers how to DIY a simple pizza box solar oven. For more sustainable and healthy living videos, feel free to follow this channel and check their videos out!

20. HOW TO BUILD A PIZZA BOX SOLAR OVEN 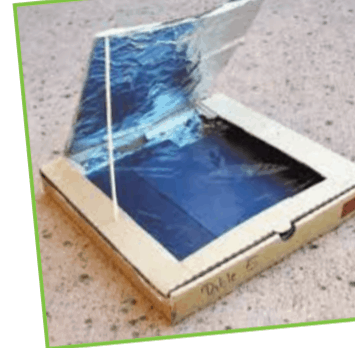 Though a pizza box solar oven doesn’t take much time, effort, and money to build, there might be a lot of questions in your head regarding the insulation and the mechanism. If you’re finally making it, why not make it as efficient as possible, right?

Read this written tutorial by Arizona Science Center, where everything is explained clearly, and all possible queries are answered. Moreover, you can find other exciting solar projects in this pdf as well. One of them is solar cars!

21. How to Make a Solar Oven with @Beau Coffron | The Home Depot Kids Workshops

This dad-daughter duo from The Home Depot has built an innovative solar oven using an old pizza box and a handful of common household items.

To make this oven design more efficient, seal the cracks around the lid with insulation tape or simply stuff rolled newspapers around the inside of the box. 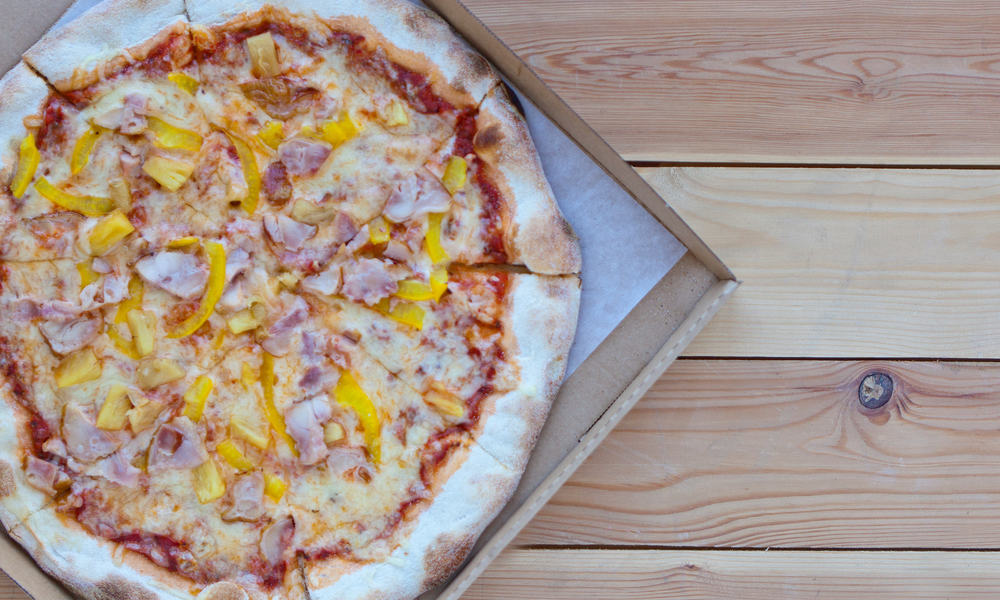 Find all the materials required to build a pizza oven on this site. And for the actual tutorial, there’s a pdf attached at the end of the post for you.

The best part of this DIY project is that it is a great way of teaching children about solar energy and how renewable energy can be used to replace conventional fuel energy for the betterment of the Earth. After all, kids are the future, aren’t they?

In case you didn’t know, your crafty pizza box solar oven can also be used to cook eggs! Don’t believe us? Check this video out! Jonathon DIYed a solar oven for this science project and cooked an egg in it. Go to the end of the video if you want to learn how he made the oven. 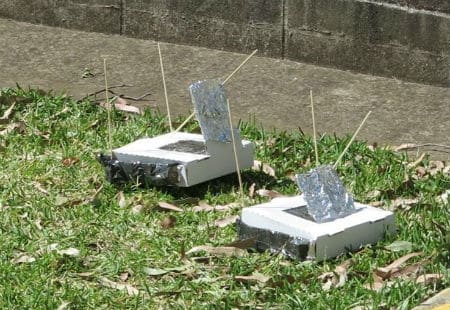 Here’s an easy-to-follow pizza box solar oven written tutorial for you. All the steps are explained clearly with the help of demonstrative images. Read the tutorial and replicate the design to build an awesome pizza oven for yourself. And, don’t forget to make some s’mores!

25. How to Make a Pizza Box Solar Oven

And remember – though this DIY is easy, adult supervision is mandatory! 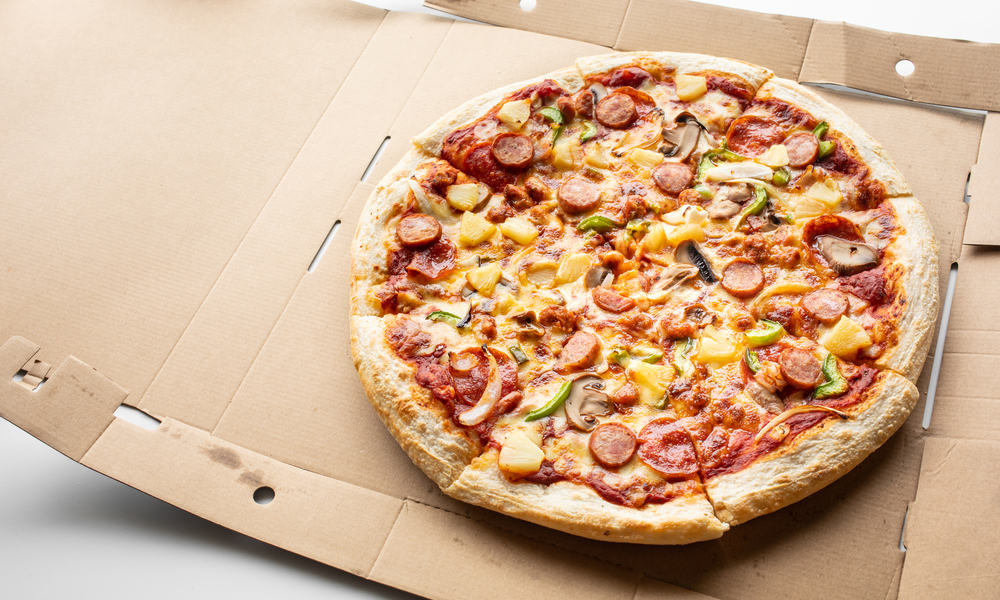 Although you might need a lot of patience to cook in a solar oven, it is quite fun to build and cook in one. Are you intrigued to make one?

If yes, all you need to make a pizza box solar oven is a pizza box and a few stationery items. You might also need a crafty helper if you are below 12. This written tutorial by Solar Cooker at Cantina West will guide you to make a fantastic solar oven.

The mechanism of a solar oven is simple. The sun’s energy gets reflected and trapped inside the box, and voila – you can treat yourself with delicious snacks!

Even though this oven might not be strong enough and is useful only during hot sunny days, this DIY is a perfect way of educating kids on renewable energy, recycling matters, and of course, the science behind this project. So, what are you waiting for? Bring out the engineer in you!