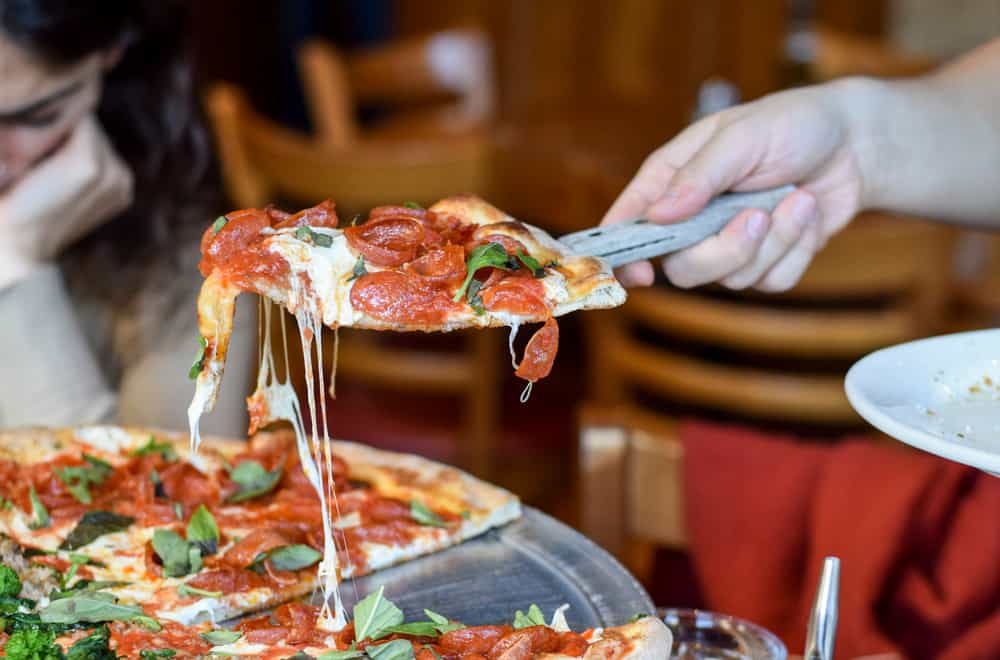 Chicago vs New York pizza, are there any differences? A major one is a way we eat them. A classic New Yorker will fold the pizza slice and eat it while on the move. But the Chicagoans have to sit on a table with a fork and knife to enjoy their pizza. 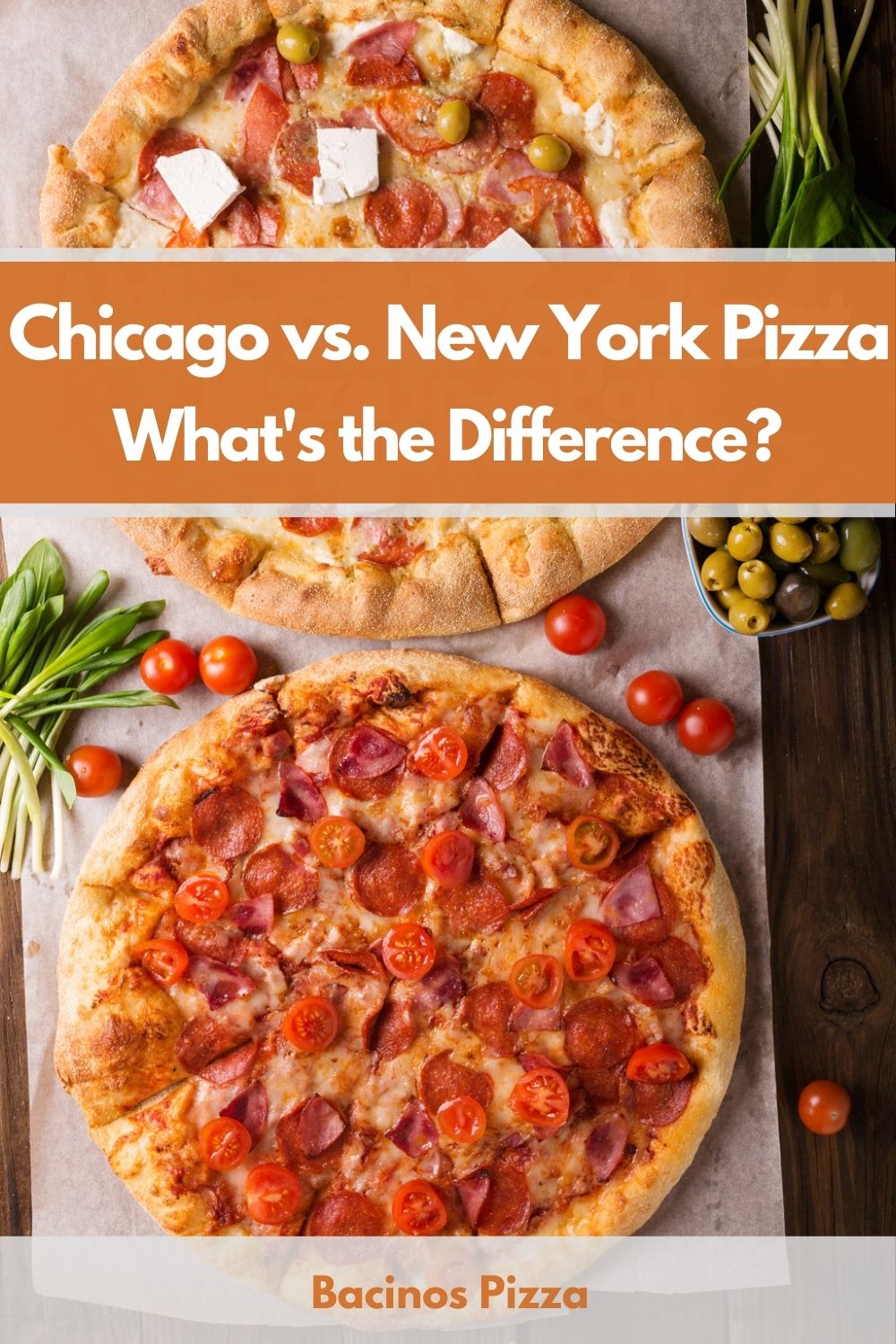 The debate on which is better than the other will never rest. The Chicagoans love their pizza, and so do the New Yorkers. But we can all agree on one thing: a good pizza is always delicious!

This article explores the things that make a Chicago pizza different from a New York pizza. If you can’t decide which of the two will suit your needs, check out all the details about these two delicious pizzas.

What Is Chicago Style Pizza? 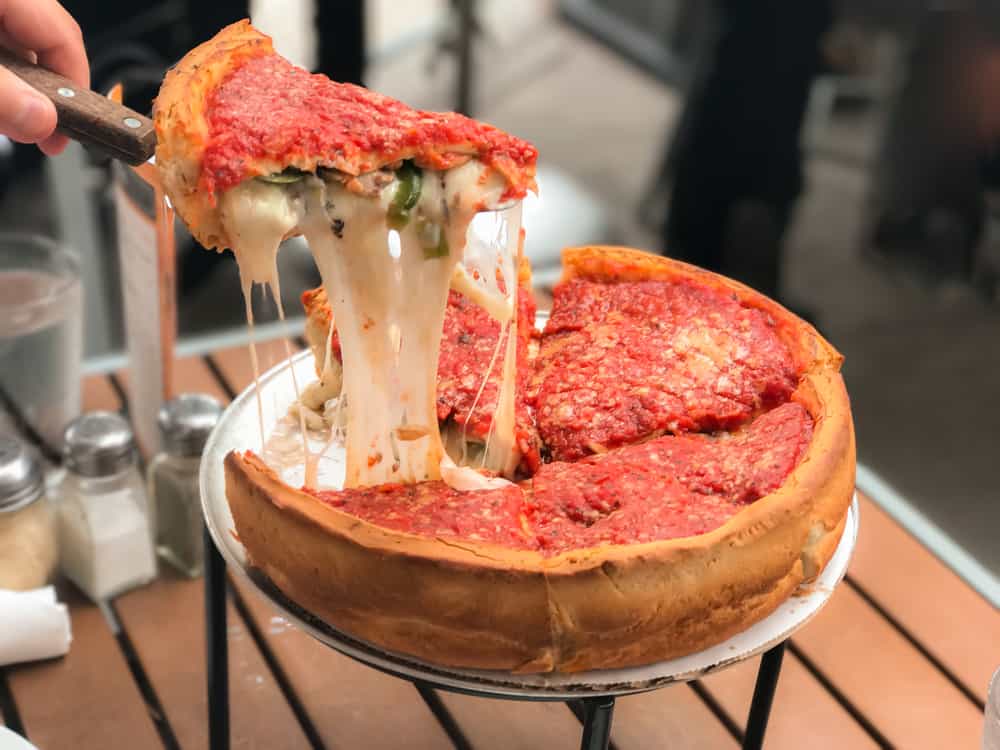 There are many forms of pizza in Chicago. One is the deep-dish pizza. Tracing its beginnings from the Pizzeria Uno in 1943, most historians credit its creation to the American entrepreneur Ike Sewel.

Pizzeria Uno created its variation of the Neapolitan pizza with high edges that forms a deep dish to put in extra topping layers.

As Chicagoans experimented on the deep-dish pizza, they created an even deeper pizza called a stuffed pizza. It is the thickest pizza in the world with its extra topping layers.

The deep-dish pizza is famous around the world. But within Chicago, the most popular pizza is the thin-crust (tavern-style pizza). A crunchy kind of pizza that’s cut into rectangular pieces. It’s very firm, so it can’t fold like the New York pizza.

What Is New York-Style Pizza? 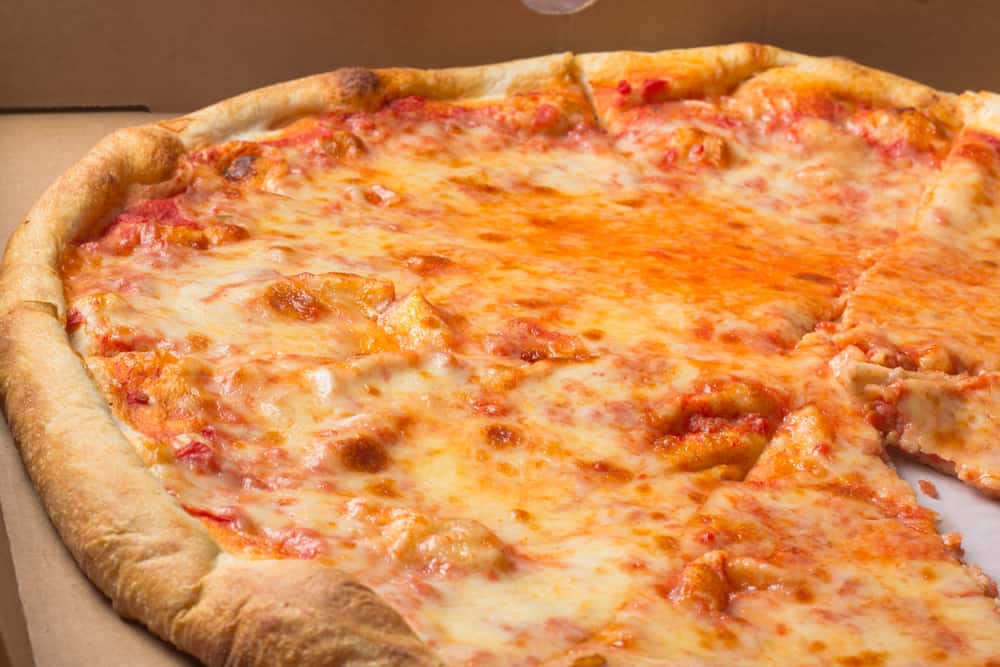 With his employee, Antonio Totonno Pero, they started selling their pie at 5 cents. But since most could not afford the amount, they would cut the slices according to the money offered.

The New York-style pizza is a thin crust pizza that’s thicker and crispy in the edges, but it gets thinner and softer towards the center.

This magnificently satisfies the New Yorker’s urge to fold a pizza slice before devouring it with one hand. It is the most popular pizza throughout most of the United States.

Let’s make an in-depth comparison between the Chicago deep-dish and the New York-style pizza.

These two pizzas have typical ingredients you would find in a pizza: dough, cheese, sausage or pepperoni, vegetables, and seasoned tomato sauce. But the Chicago deep dish is prepared, cooked, and presented differently from the New York-style pizza.

1. Chicago Deep Dish Is A Pan Pizza While The New York Style Is A Hand-Tossed Pizza

Chicago deep dish is a pan pizza. This means that after kneading your dough, you stretch it inside a cake pan or cast-iron skillet. When stretching out the dough in the bottom of the pan, you also stretch it along the walls. You can make the edges as high as you like. The result is a dish-shaped dough. You will then add your layers of toppings inside this dough.

Before placing the dough in the pan, you have to oil it properly. The oil helps you retrieve the pizza in one piece. But it plays an even better role. The oil fries the dough as it bakes giving the crust its distinct color and taste.

The New York-style pizza is hand-tossed. This means that after kneading your dough, you stretch it in the air. You might have seen how experienced chefs stretch it out in minutes like a cloth. That way, you can make your pizza crust as wide as your oven can hold. 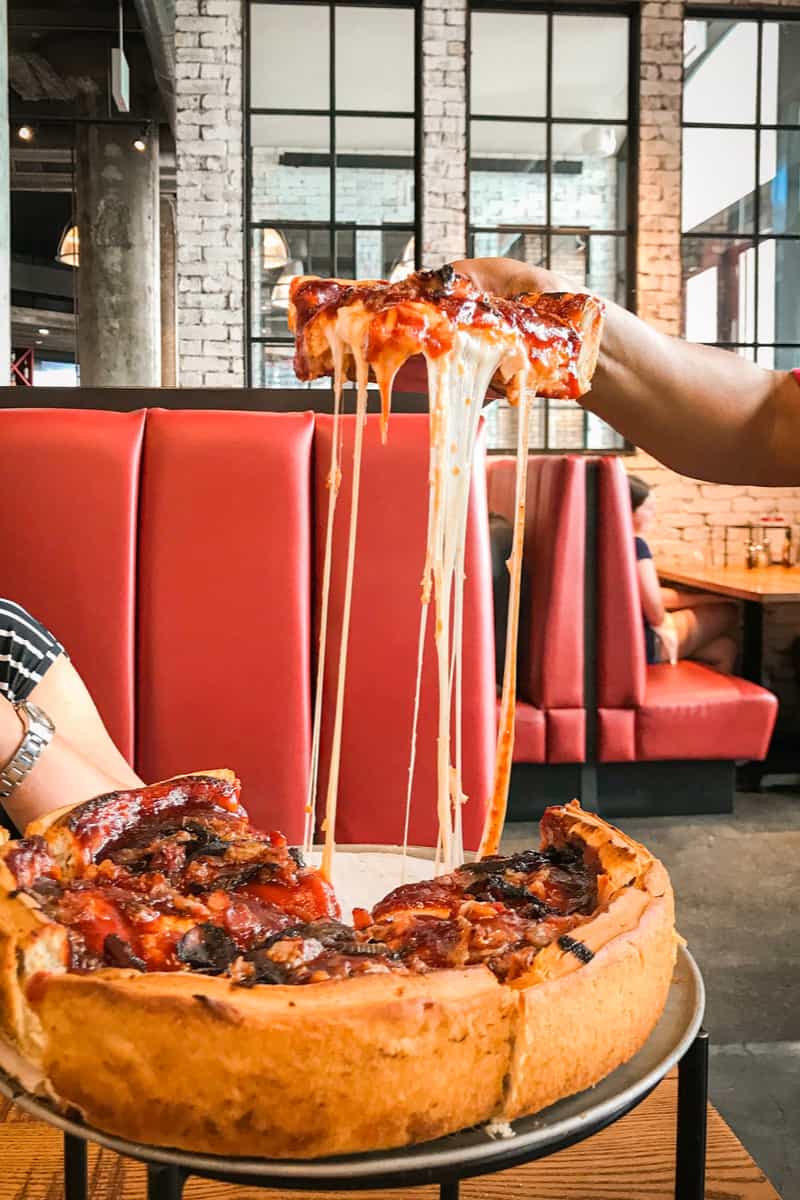 The Chicago pizza can hardly go past 12 inches (30cm) in diameter. That’s because the dough follows the size of the pan. But what it lacks in width, it makes up in thickness.

The New York-style pizza could be 12 inches wide or a gigantic 36 inches (90 cm) width pie.

The Chicago-style deep-dish crust creates a firm bowl-shaped foundation for extra layers of toppings. The crust itself is usually medium thickness. The deep dish is stuffed with layers of cheese, Italian sausage, and uncooked tomato sauce. Every bite you take from the pizza has every ingredient.

The New York-style pizza is different.

The New York-style pizza is always thin crust. The edges are as high as other parts of the crust. The thin New York-style crust can only carry a thin layer of tomato sauce and the toppings. You cannot overload the pizza to avoid soaking up the crust. 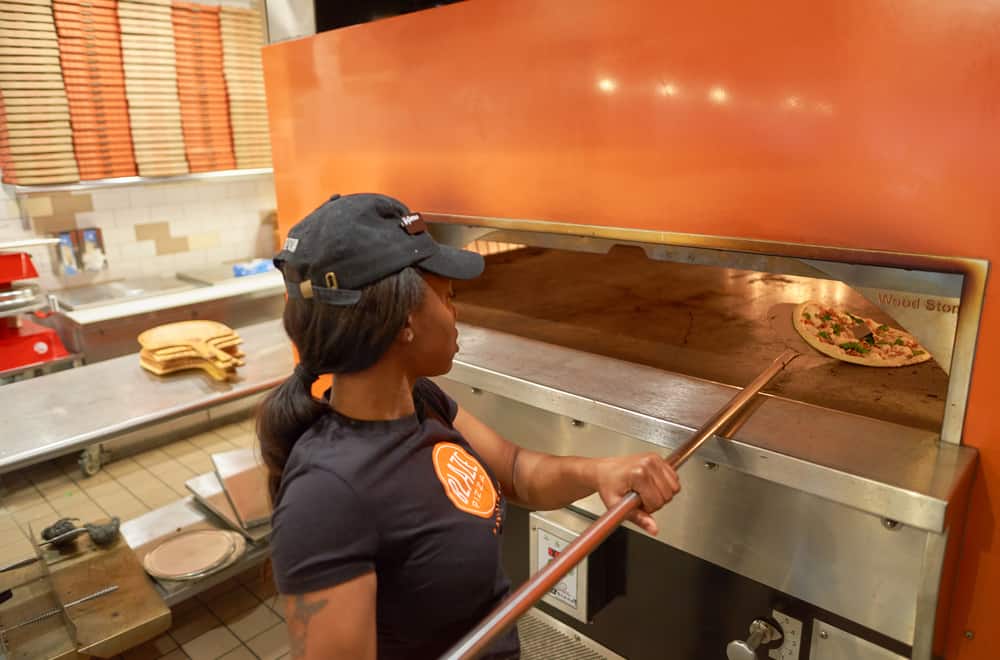 The thick layer of toppings in a Chicago deep-dish needs more cooking time. You may bake the crust a little before adding the toppings. And after you add the toppings, you still bake for at least 30 minutes.

But the New York style is perfect for the impatient. This pizza can move from dough to pie in a box within 15 minutes. Traditionally, they only added tomato sauce and cheese, but you also add your favorite toppings.  The thin toppings take a much shorter time to bake (about 15 minutes).

5. Chicago Deep-Dish Is An Inverted Pizza.

Since the Chicago dough needs a longer time to cook, you have to layer your ingredients such that they won’t burn. For this reason, this is how you layer the Chicago deep dish ingredients. Dough> Cheese> Toppings> Sauce

Start with tomato sauce on the dough. Follow these with some grated mozzarella cheese. Add any toppings like mushrooms. Then more cheese if you want it extra greasy. 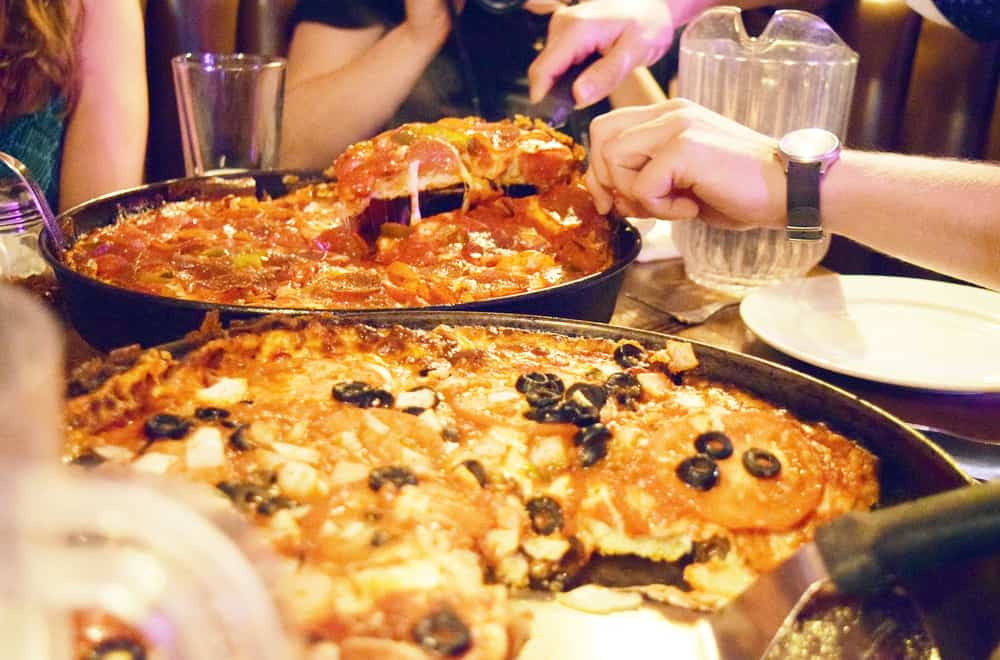 One good thing about the tall Chicago crust is that it can hold more tomato sauce without becoming soggy. So, you will have no problem covering the crust with tomato sauce from end to end. You can also fold the edges a little to hold in the sauce better.

This is unlike the New York-style pizza. The sauce never gets to the crust’s edges. You only cover enough to hold your toppings without spewing out of the crust.

If you love to indulge in seasoned tomato sauce, then the Chicago deep dish will satisfy your taste buds.

The sauce used in Chicago pizza may be chunkier than the New York pizza.

While the New York-style pizza comes in signature triangular slices, the Chicagoans do not bow to the norms. The Chicagoans cut their tavern-style pizza into small square (or rectangular) pieces.

As for the deep dish, it is unsliced when you order takeout. That way, it can hold the toppings and sauce better. 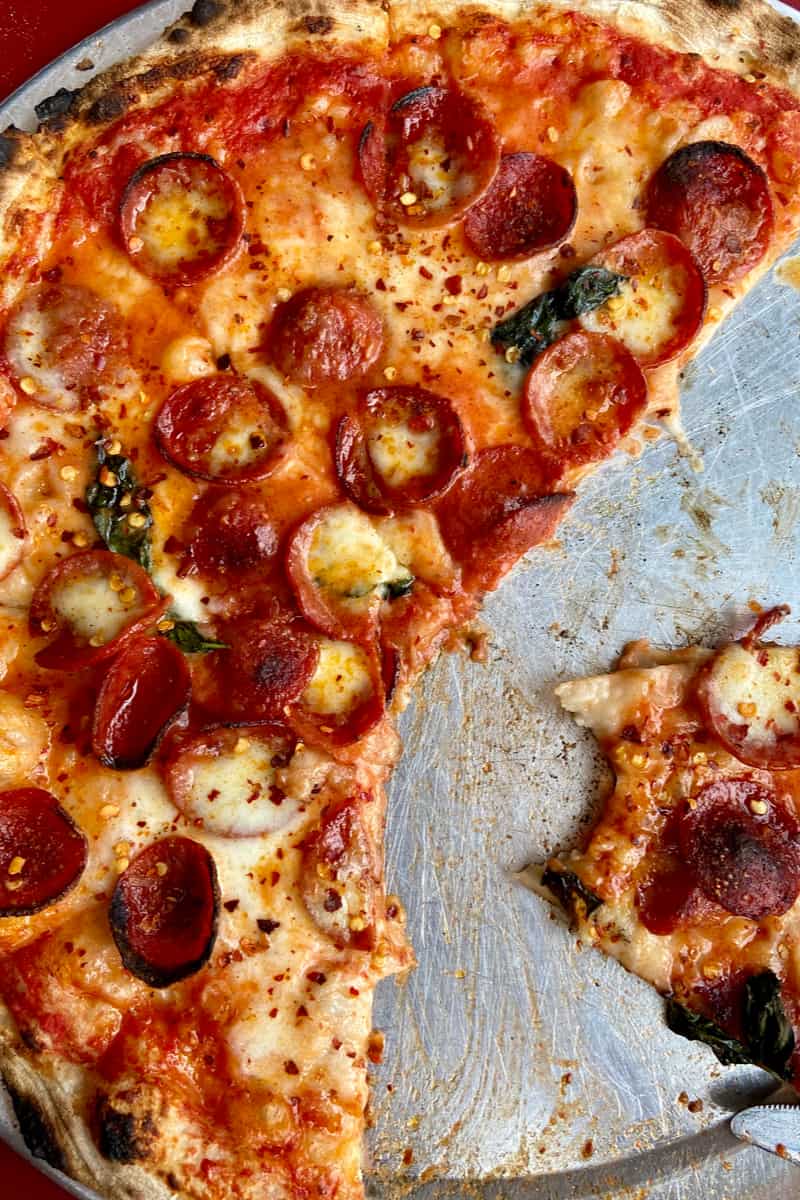 As for the New York-style pizza, you might need to pat away some of the greasy cheese. But folding it into two helps drive the grease towards the center rather than dribbling down your hands.

9. Chicago Pizza Is A Meal, While The New York Style Is A Snack

With a dish-shaped crust and tons of toppings and sauce, the Chicago deep dish is a meal by itself. You can’t even multitask as you eat this pizza. You need a knife, a fork, and a table to enjoy the Chicago thick crust pizza.

The New York pizza is the perfect snack when you can’t afford to sit down and eat. You can fold the slice and eat with one hand as your other hand works.

While you can eat a whole New York pizza in a go, you can’t eat half of the Chicago deep dish.

Other key differences are that the New York style is thinner and cooks in a very short time. But the Chicago pizza is thick and cooks longer.

Chicago Vs New York Pizza – Which Is Better?

This depends on your mood. The two pizzas are excellent! If I had to choose between the Chicago style and New York style with a gun to my head, I would choose the tavern-style Chicago pizza.

What do you prefer between the two? And why? We love to hear your opinions! Share your thoughts in the comments below. 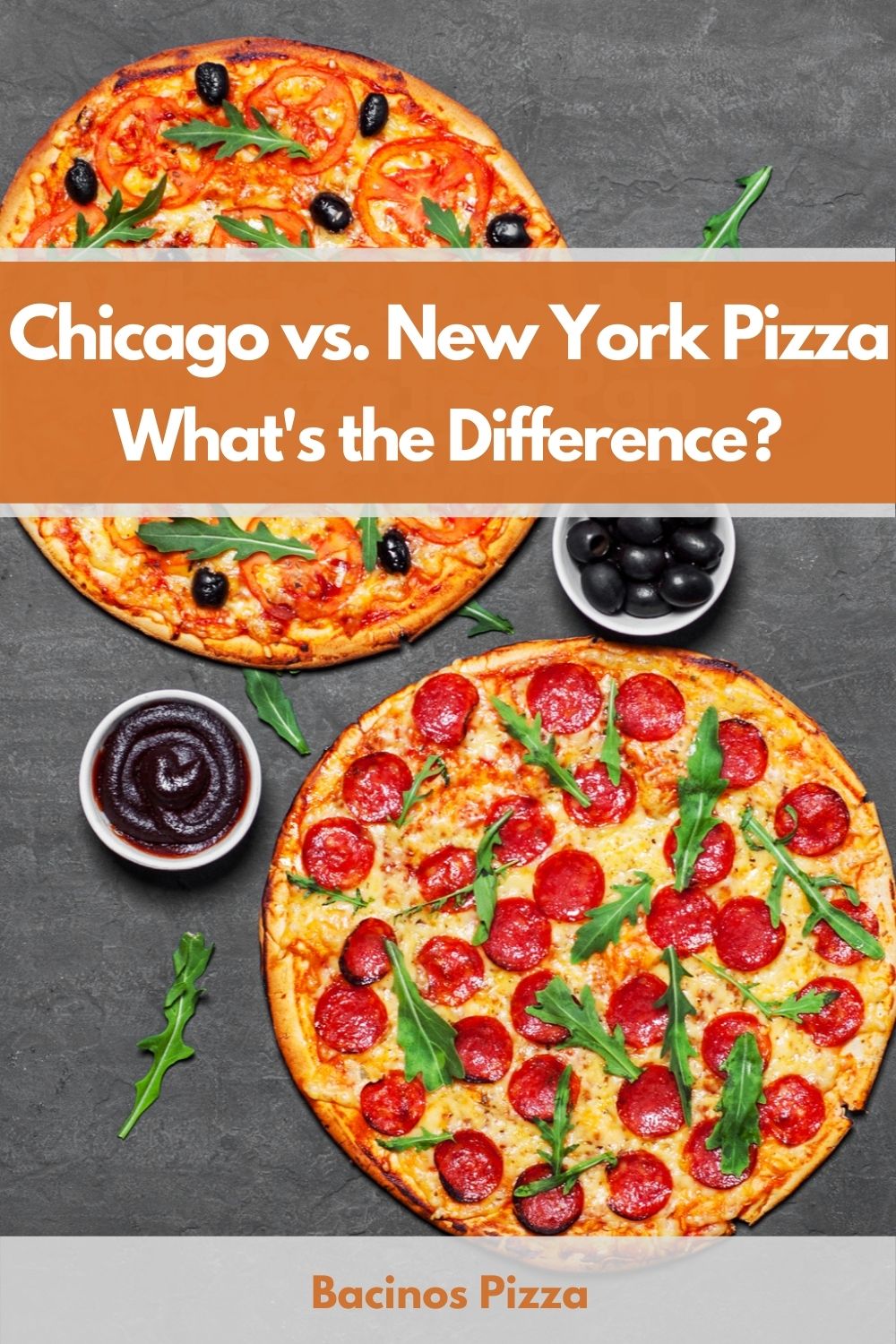