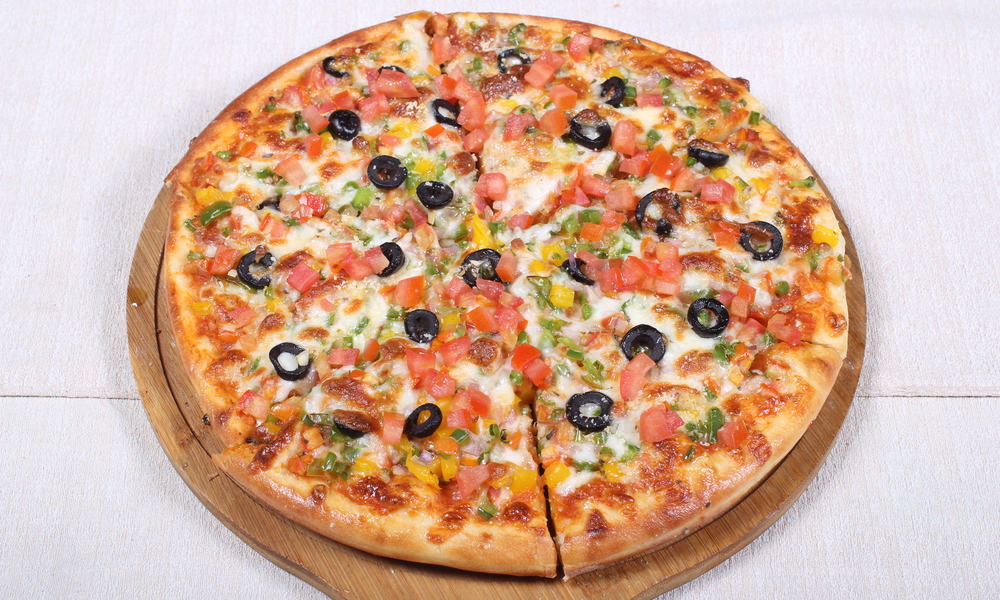 Pizza is one of the nation’s favorite foods. But when it comes to what goes on top, opinions vary widely! Most years see a range of surveys seeking the public’s views on their favorite topping. So what’s the verdict? 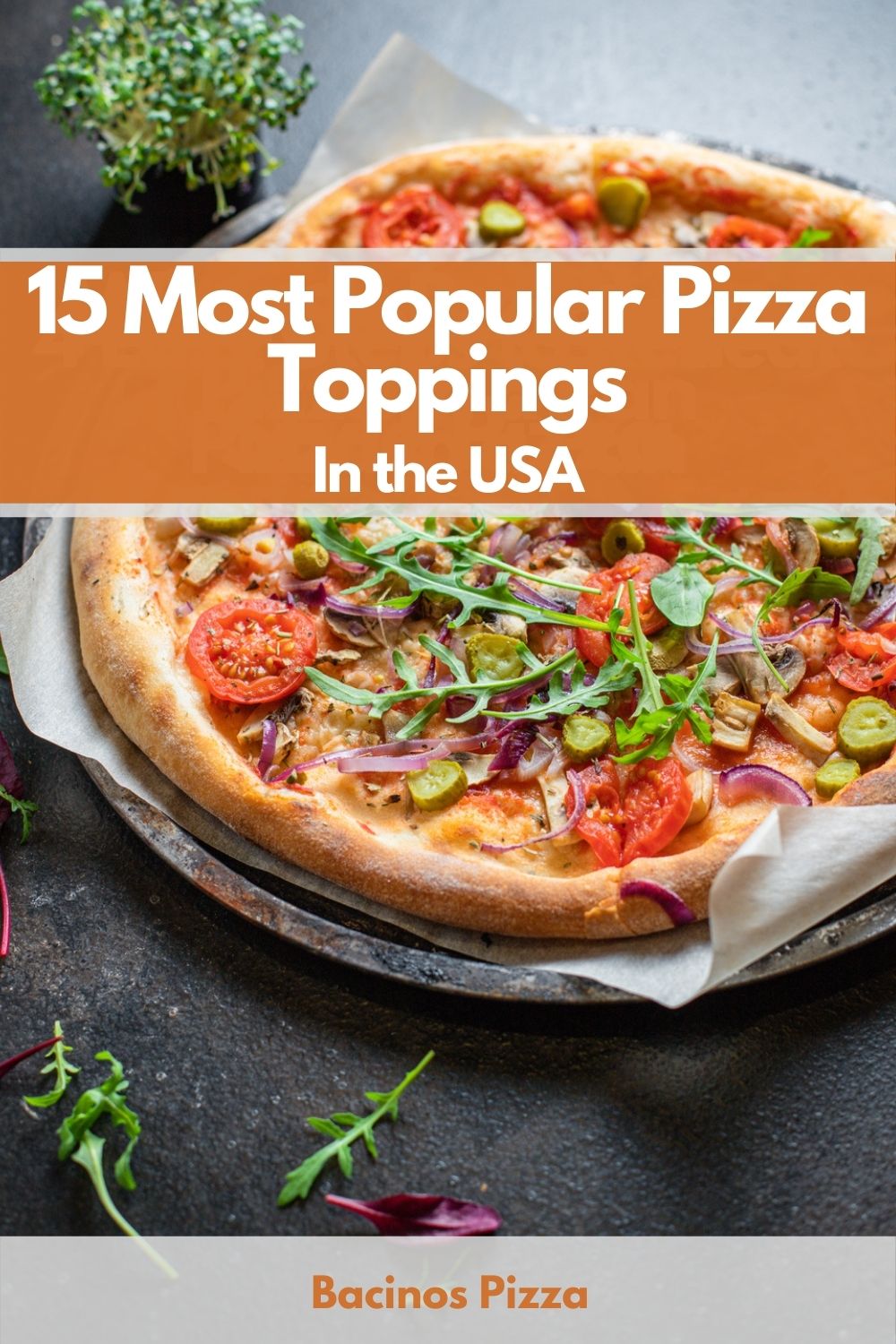 We’re going to look at 15 of the most popular pizza toppings in the USA today. And we’ll find some answers that divide Americans! So step this way to find out which flavors get the most votes – and which of them some of us love to hate. 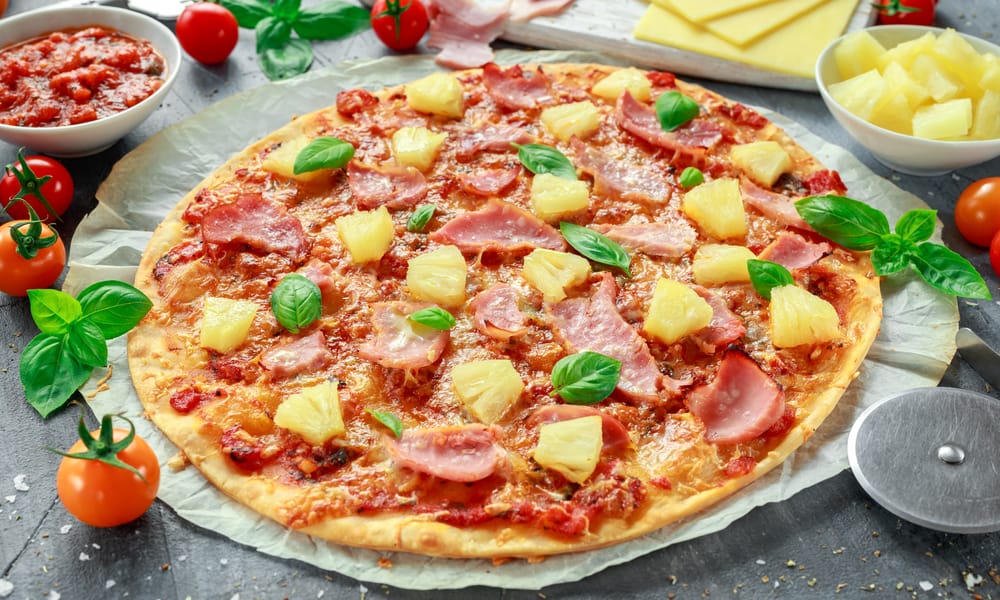 Surely the most controversial of toppings, the world is divided into those who love and those who hate pineapple on pizzas.

In the pineapple loving camp stand such luminaries as Justin Trudeau, the Canadian prime minister, and actors Jeff Goldblum and Dwayne “The Rock” Johnson. Haters include President Jóhannesson of Iceland (who prefers seafood) and British chef Gordon Ramsay.

Why this humble fruit provokes such vitriol is hard to say. But in a 2017 poll, the pineapple lovers came out on top. 47 percent of Americans approved its use as a pizza topping, with 32 percent against.

Truly, pineapple is the people’s topping. It’s also, of course, a crucial ingredient when paired with ham, and sometimes bacon, atop a Hawaiian pizza. (The Hawaiian, by the way, was actually invented in Canada.)

Love it or hate it, pineapple on pizzas is here to stay. 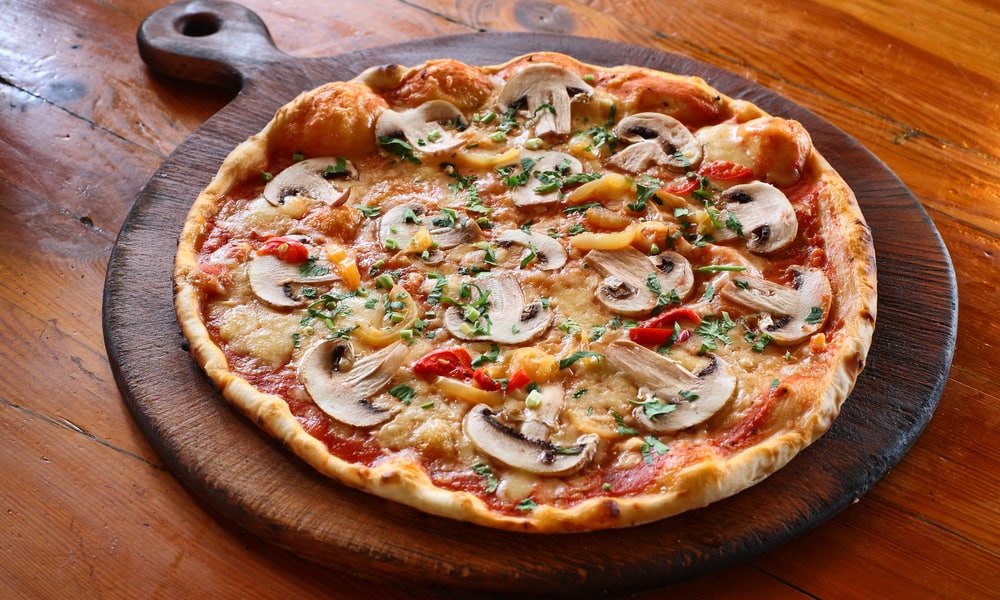 Mushrooms and a cheese are a marriage made in heaven, so it’s perhaps unsurprising that mushrooms are a beloved pizza topping. In a 2019 poll, 31 percent of respondents named them as one of their three favorite toppings.

Their flavor comes from high levels of glutamate. It’s this chemical that’s responsible for triggering our “umami” – savory – taste buds. And it means that for most of us, mushrooms are just delicious.

They’re good for us too. They contain a range of B vitamins, potassium, iron and selenium. They’re low in calories and a good source of fiber. And some mushrooms also contain vitamin D, boosting our immune systems.

So load up your pizza and enjoy! 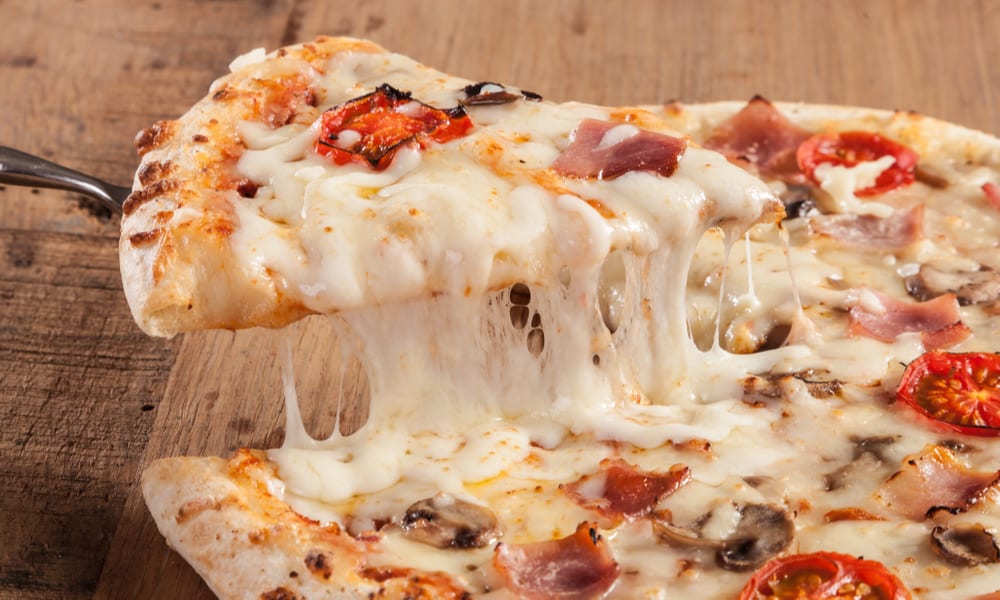 With so many exotic toppings out there, simple mozzarella remains one of the original and best. In a poll of Americans carried out in 2019, 20 percent of people named it one of their top three toppings.

There are, however, different views when it comes to the type of mozzarella that works best. Some claim nothing beats fresh discs of the cheese. Others prefer low-moisture grated versions.

Whatever you choose, mozzarella with tomato sauce and basil is a classic and authentically Italian combination that’s hard to beat. 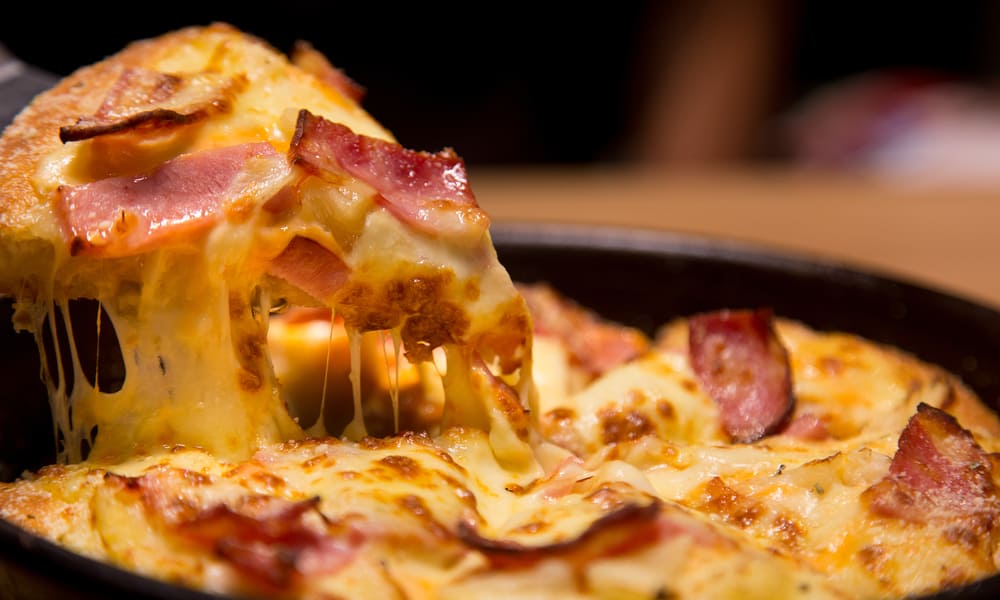 There are very few meals that aren’t improved by the addition of bacon. And the rule certainly holds true when it comes to pizza.

20 percent of Americans polled in 2019 named it one of their top three toppings. That’s a verdict that gives it even ranking with the original topping, mozzarella.

The salty flavor of bacon works beautifully with cheese and tangy tomato sauce. It’s often added to the controversial Hawaiian pizza, giving an extra dimension to the ham and pineapple combo. And it’s a staple of many a pizza chain’s meat feast.

It may be high in salt and fat – but hey, that’s why it tastes so good! 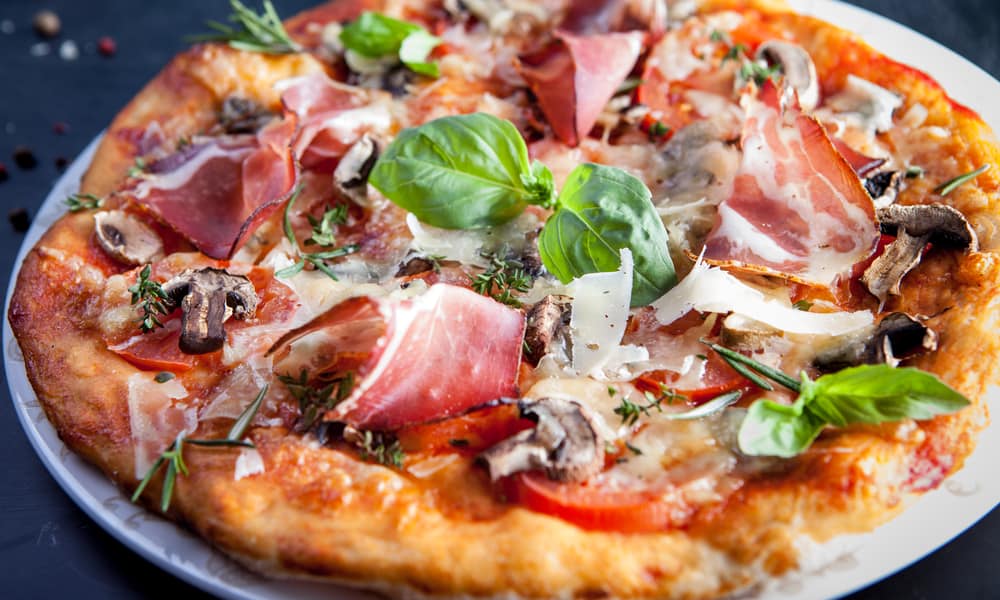 The other half of the Hawaiian duo, ham is a pizza topping that gets a mixed reception. It’s ranked as one of their favorite three toppings by 13 percent of Americans. That’s exactly the same proportion who ranked it one of their three least favorite toppings!

Perhaps it’s the association with the divisive Hawaiian pizza that’s led to this result. But ham is a versatile choice for pizza and works well in plenty of other flavor combinations.

And let’s not forget that prosciutto is, after all, a type of ham. You’d be hard pressed to find a classier pizza topping than prosciutto and figs. And it also works beautifully with pears, goat’s cheese and spinach. 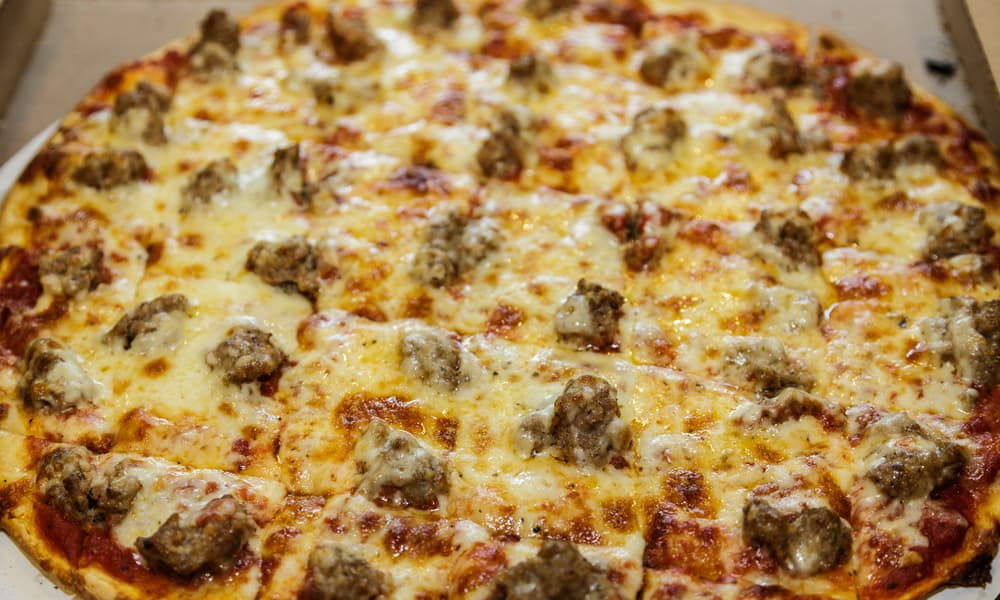 In the US, when we talk about sausage on pizza, we mean Italian sausage. But there’s a huge variety out there – mild or spicy, precooked or fresh, chunky or thin sliced.

Whatever option is chosen, it seems, we love sausage on our pizza. 34 percent of those surveyed named it as one of their top three toppings. That makes sausage the second most popular topping out there.

It’s a key ingredient in many a meat feast – but it’s also got flavor enough to stand alone. Pair it with simple mozzarella and tomato sauce. Delicious! 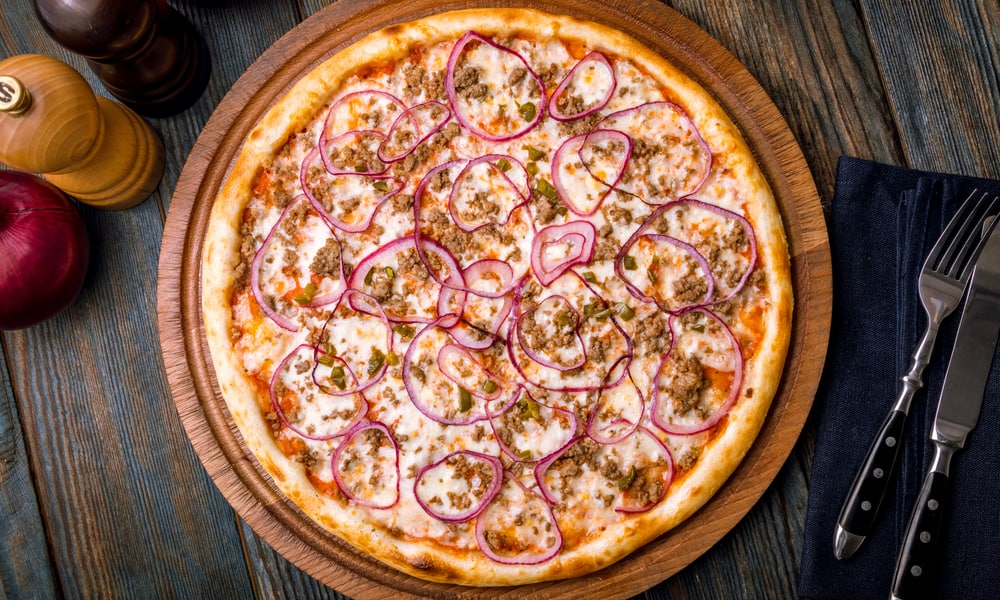 The humble onion may not look like much to write home about in its natural form. But peel it, slice it and add it to your pizza, and it’s a winner.

Onion caramelizes beautifully in the oven, adding a sweet flavor to your pie. That happens because of something called pyrolysis. The high temperatures cause the larger sugar molecules in the onion to break down into smaller molecules. The result is a sweeter and more intense flavor.

Amongst vegetables, onions come second only to mushrooms as one of America’s favorite pizza toppings. 18 percent of those surveyed named it one of their top three garnishes. 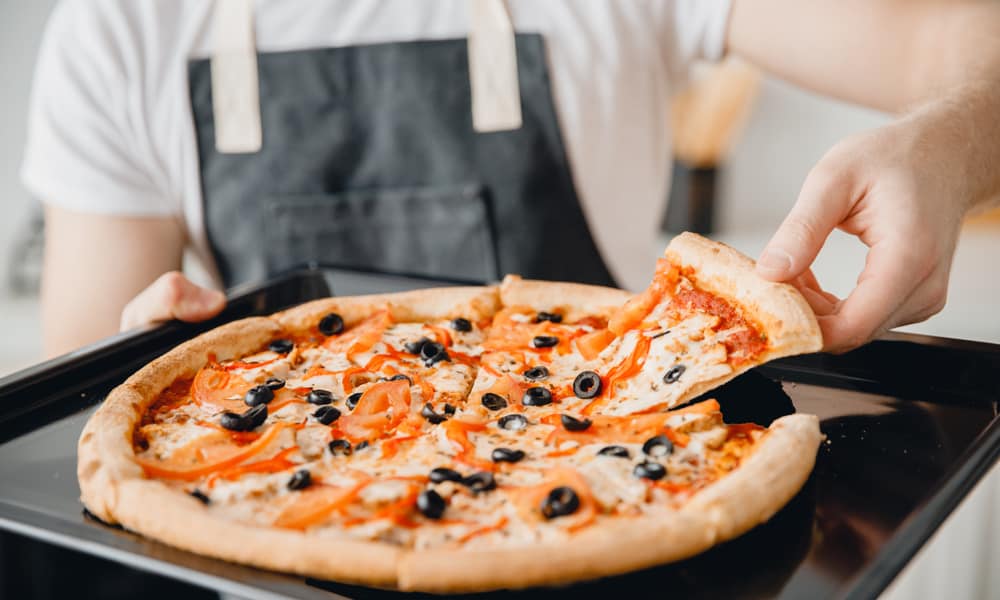 Olives are a quintessential Italian pizza topping. Black olives are more commonly used on pizzas than green. And just one look at those glossy dark fruits summons up the Mediterranean sunshine.

Olives work beautifully with seafood on pizza, especially tuna. And they’re also great with mozzarella, tomato and basil for a vegetarian taste sensation.

But not everyone is convinced. 14 percent of people named olives as one of their favorite three pizza toppings.  But the same percentage named them one of their least favorites! 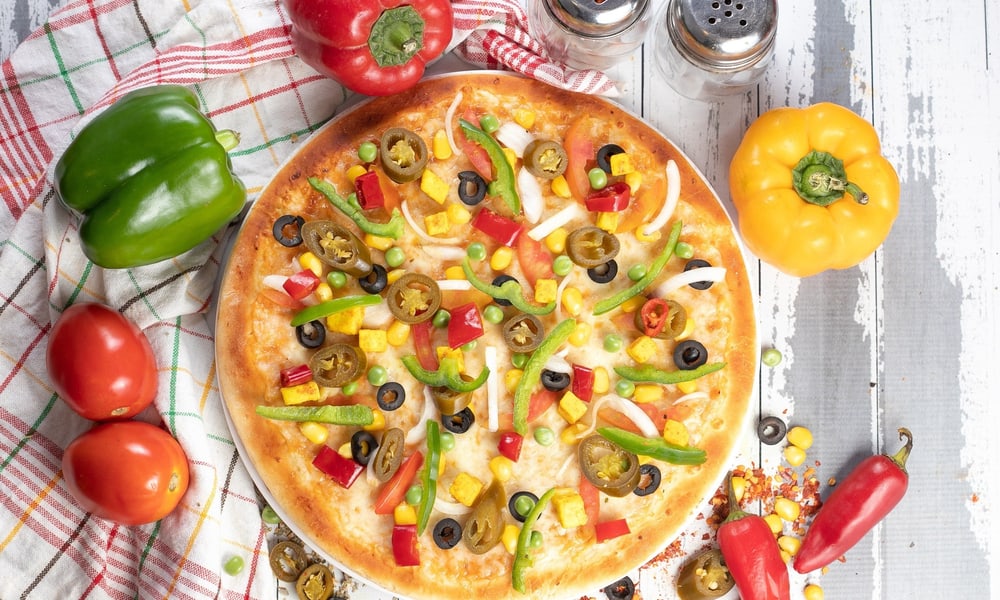 Peppers add color as well as flavor to pizzas. And they’re another vegetable with a flavor that becomes sweeter and more intense when it’s roasted.

It’s for that reason that peppers are often pre-roasted before being added to your pizza. That gives them the longer cooking time they need to soften and develop their flavor. And there’s no risk that the rest of your pie will end up charred.

Peppers are a great way of adding stronger flavors to a vegetarian pizza. And in that 2019 survey, they were listed as a favorite topping by 11 percent of respondents. 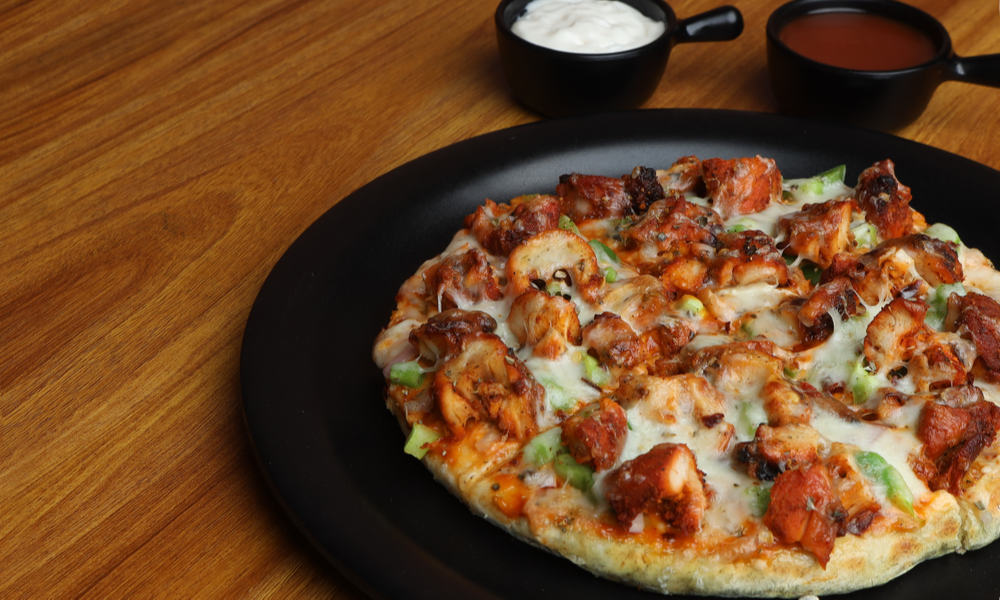 Chicken is usually a favorite part of many a meal. But when it comes to pizza, it’s not so popular. Only 8 percent of those surveyed named it a top three topping. And the same percentage named it one of their three least enjoyed toppings.

That might be because chicken is pre-roasted before being added to pizzas. That ensures that any harmful bacteria are well and truly dead before you eat it. But being put into the oven a second time can leave it dry and stringy. 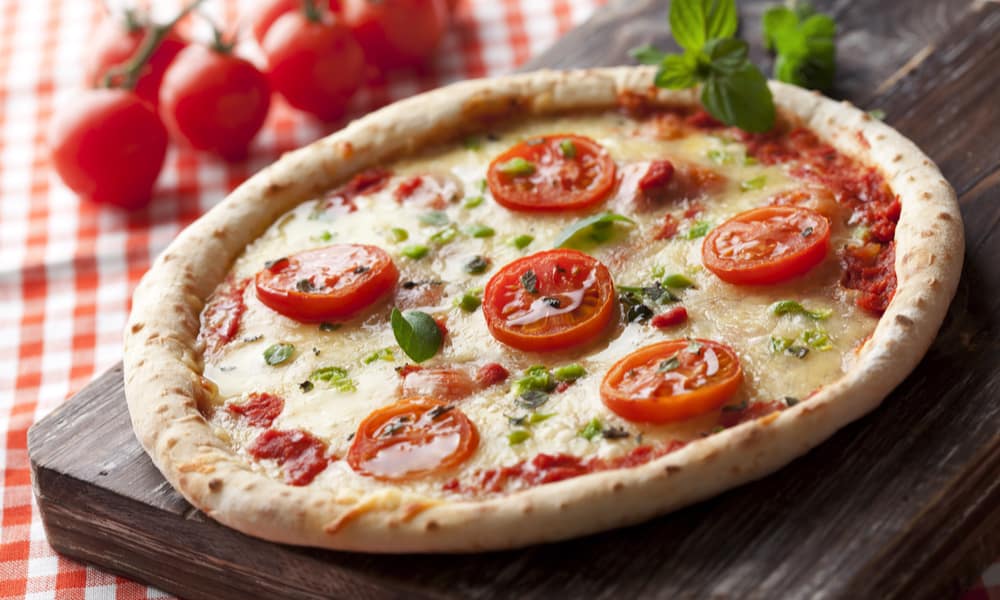 Tomatoes appear in most pizzas courtesy of the tomato sauce. But when it comes to toppings, slices of fresh tomato can really hit the spot. They’re particularly good paired with olives and seafood. And they’re a key ingredient of the classic Margherita pizza.

But perhaps that tomato sauce means people overlook the joys of fresh tomato as a topping. When surveyed, only 7 percent of people named it as one of their favorites. 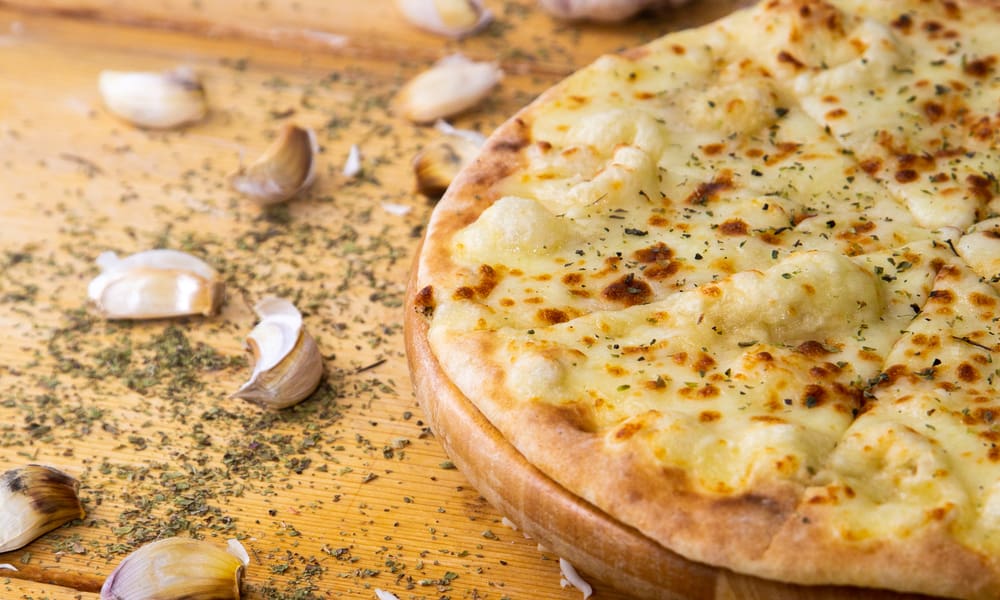 Pizza lovers wanting to keep away vampires can opt for fresh garlic on top of their pie. Onion and garlic are a time honored flavor combination in Italian cooking. Both often feature in pizza sauce too.

While garlic doesn’t get a mention in some polls, a 2020 survey of its customers by Pequod’s Pizza placed fresh garlic in eighth place as a favorite topping.

Those vampires had better watch out. 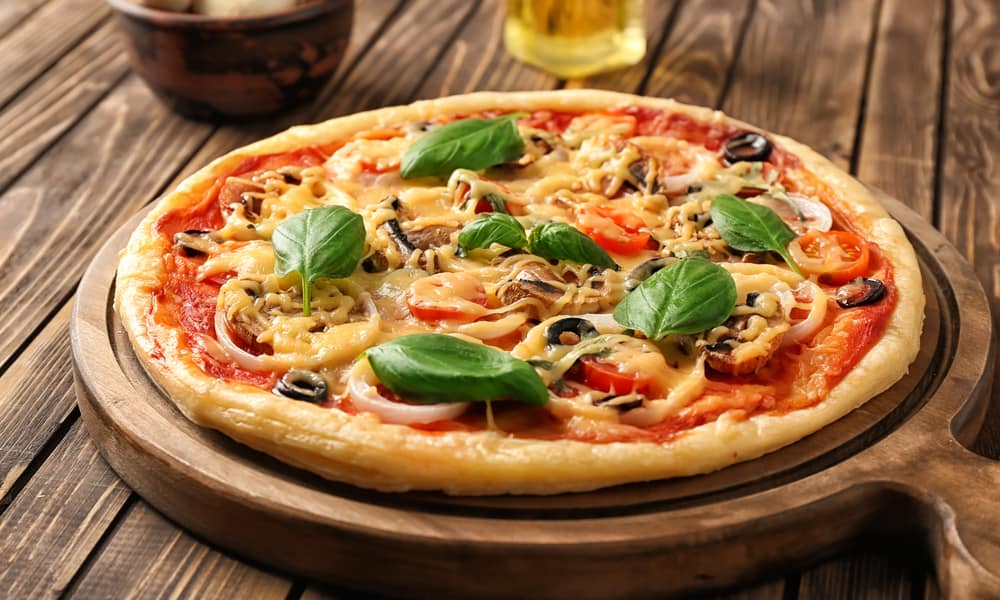 Fresh basil sprinkled on top of your pizza adds both color and flavor. It works beautifully with a simple margherita, with vegetarian and with seafood toppings. And it brings an authentic Italian edge to any pizza.

Basil was another of the favorite toppings for Pequod’s Pizza customers, ranked tenth overall. 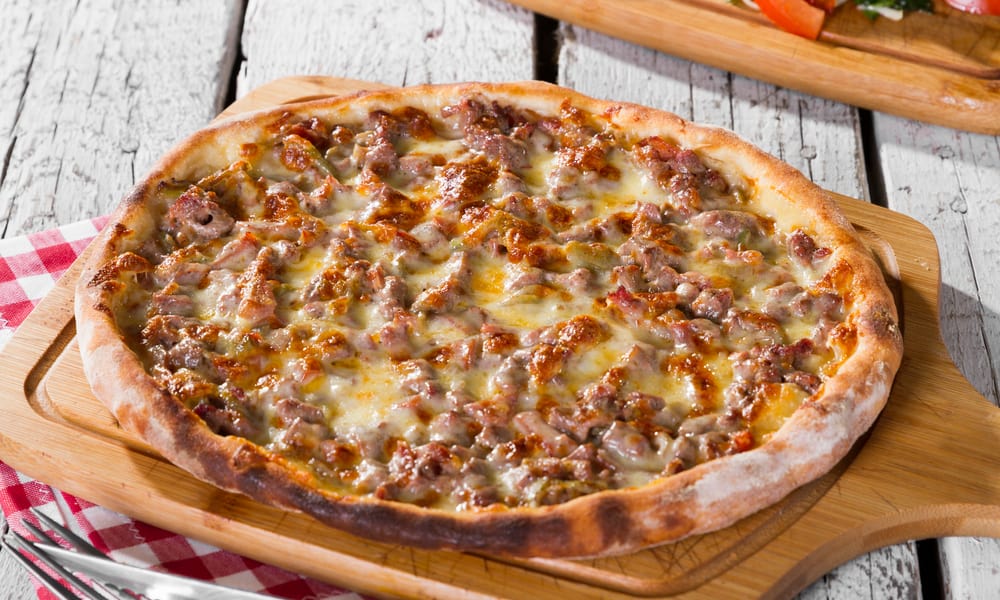 Beef appears to have declined in popularity as a pizza topping. Back in 2013, it was ranked as the favorite by a small but respectable 4 percent of people. At the time, it won more admirers than tomatoes, olives, peppers and onions.

Today, though, it seems largely forgotten. Beef didn’t get a mention at all in a 2019 poll of people’s most and least liked toppings. 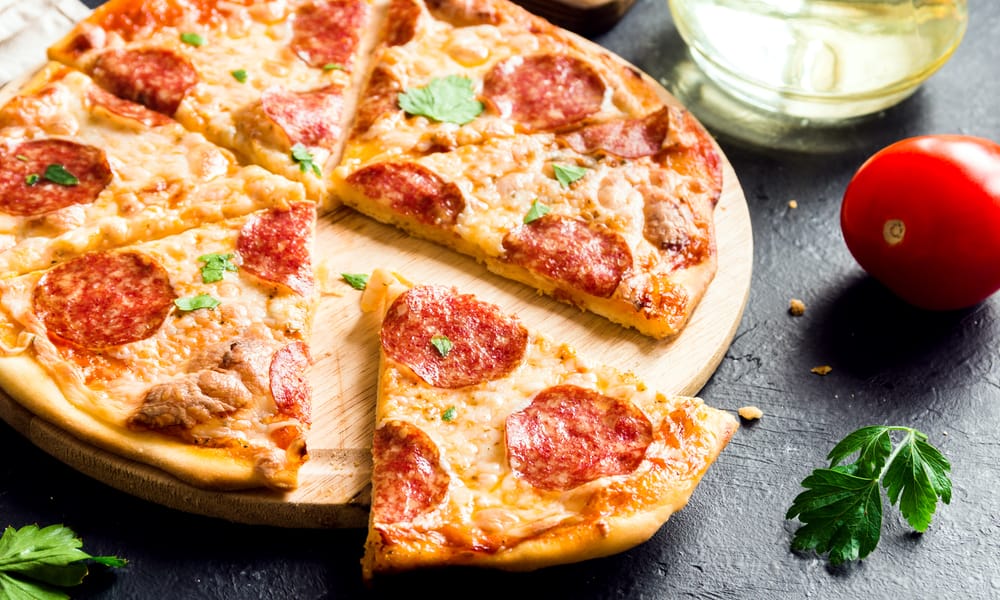 With pepperoni, we’ve saved the best until last! Surely the king of toppings, pepperoni consistently tops the charts. Today, about half of all pizzas sold by Domino’s are topped with pepperoni.

Those distinctive meaty discs look great surrounded by melting cheese. Some pepperoni sits flat on the pie. Other types, usually made with a collagen case, curl up at the edges.

But whether flat or curly, the punchy flavor of pepperoni means that for many of us, pizza just isn’t pizza without it.

Which is your favorite?

We hope you’ve enjoyed our round-up of the 15 most popular pizza toppings in the USA! Does your favorite appear on our list? Or do you prefer something different? Perhaps we’ve even inspired you to try something new!

Whatever your favorite topping, one thing is for sure – we love pizza! 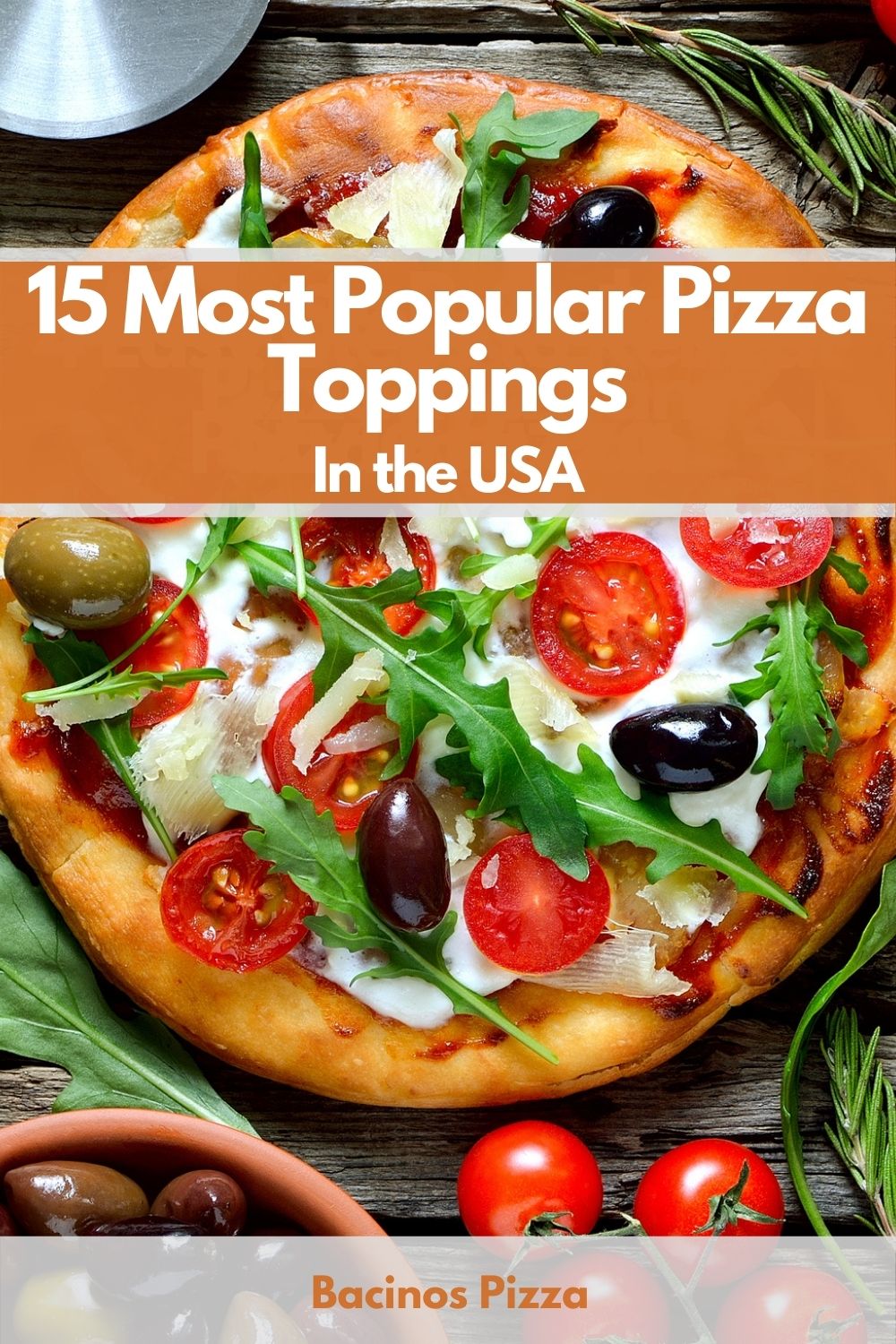