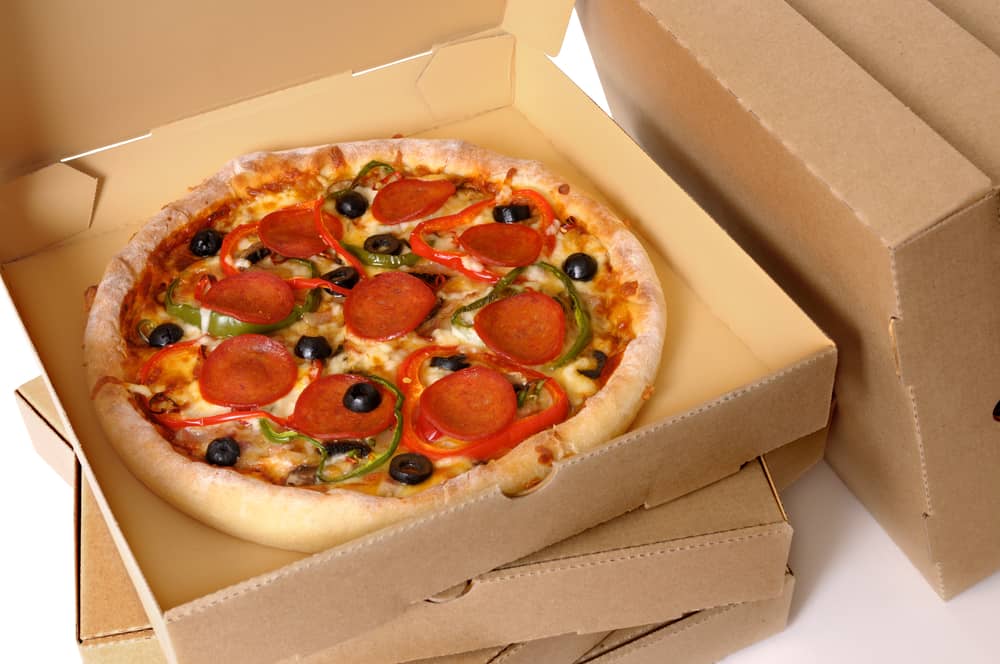 Two questions have given people the world over sleepless nights. If a tree falls in a forest and there’s no-one to hear it, does it make a sound? And why does round pizza come in a square box? 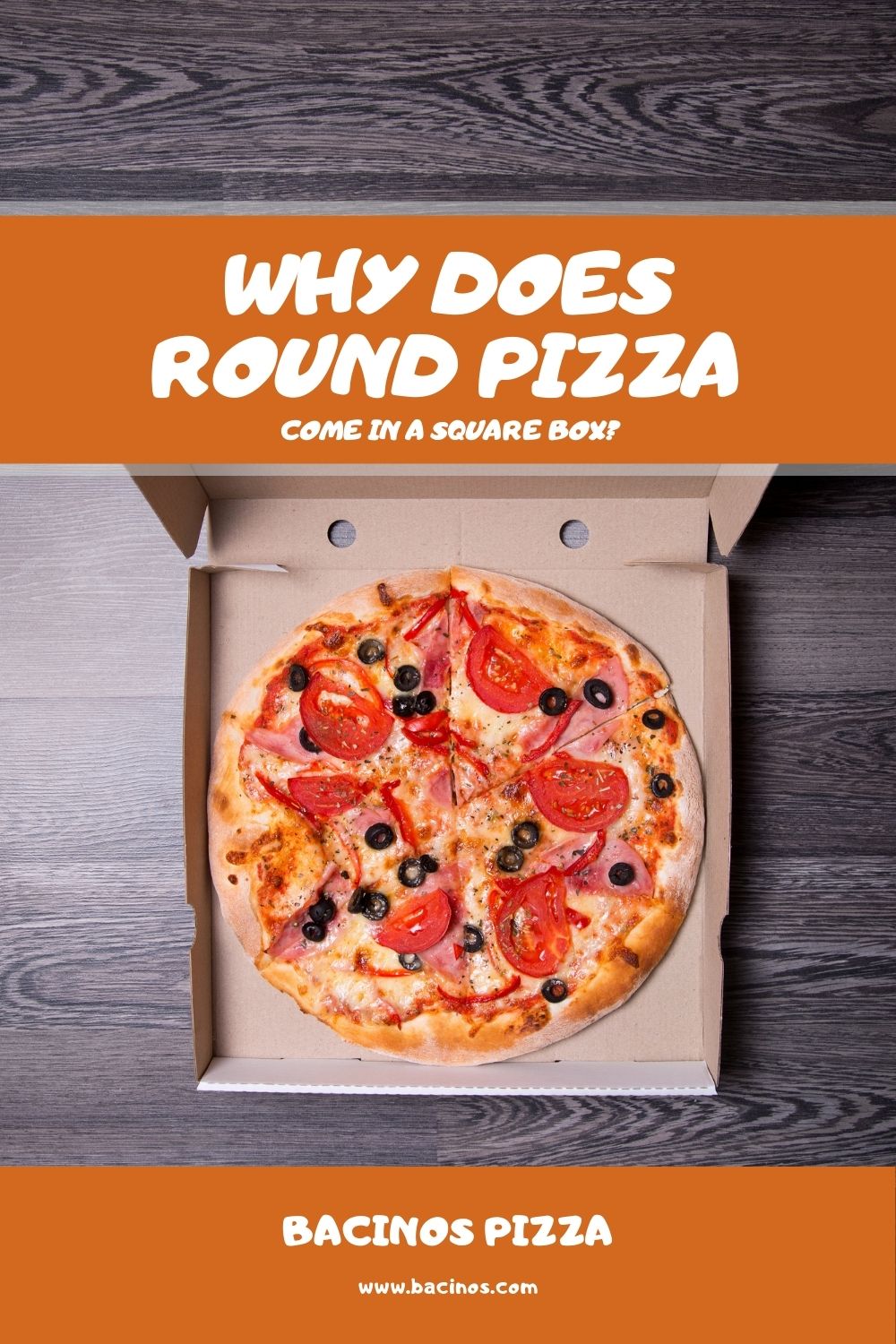 Fortunately, we’re here to put a stop to those debates once and for all. For a start, that tree makes a sound. It just does.

But what about the pizza? Well, that takes a little more explaining. So if you’re ready to unravel one of the mysteries of the universe, read on…

Which came first – the pizza or the box?

A round pizza in a square box is clearly a strange state of affairs. There’s all that wasted cardboard around the edge of your tasty pie.

But you could just as easily ask why the pizza is round, as why the box is square. So let’s start by doing just that.

But when it comes to your standard takeout pizza, it’s invariably round. So why is that?

Well, to start with, the process of making the pizza lends itself to a circular shape. When seasoned pizza chefs stretch the dough, they flip it between their hands, turning it as they do so. That gives a nice thin base that’s an even depth all over. And all that turning also results in a circular shape.

There’s another helpful outcome with a round pizza too. It’s more likely to cook evenly in the oven. Each part of the edge is exactly the same distance from the center. That means that, as long as your oven heats evenly, your crust will be the same golden shade and crispy texture all over.

Last but not least, cutting round pizzas is a very speedy process. In a busy pizza parlor, that spoked wheel cut can be done in a matter of seconds. And that means faster production, happier customers and more profit.

So if that’s why takeout pizza is round, why on earth is the box square?

Well, box manufacturers usually make boxes for lots of different kinds of products. The cardboard box for your pizza may have come from a factory that also makes boxes to ship bars of chocolate.  Or toothpaste. Or soap powder. Or books. or – you get the idea.

The machines are designed to make square boxes in different sizes. The box can be cut from a single piece of cardboard and folded into shape. The process is cheap, fast and easy.

The box-making machines can be recalibrated to produce a box that’s big or small. But changing the shape of the box would be an altogether different challenge.

And because most other boxes are square, that would mean making a machine just for pizza boxes. And that would make those boxes very expensive.

Who knows how much this would cost. But we do know that selling pizza is a very competitive industry. So anything that puts up prices would disadvantage your pizza next to the competition’s. That’s not a great incentive to go to all the trouble of creating a round pizza box.

But why are other boxes square?

You might be thinking you can see the case for having a pizza box the same shape as other boxes. But why couldn’t chocolate or toothpaste or soap powder or books come in round boxes instead?

Well, the thing about square and rectangular boxes is that they fit neatly together. Even if they’re not the same size, you’ll usually be able to stack them in a way that makes pretty good use of the available space.

And that means that they are easy to store and transport. Think about tonnes of chocolate bars traveling long distances to get from factories to shops and consumers. Transporting them costs a lot of money.

Now imagine two round pizza boxes side by side. Put them as close together as you can and they’ll still only touch at one point. There’ll be lots of empty space between the edges.

When you come to loading your truck or packing your shipping container, you’ll have lots of space you can’t use. That’s very inefficient, and it’s why most boxes are rectangular or square instead.

Are there any advantages to having a round pizza in a square box? 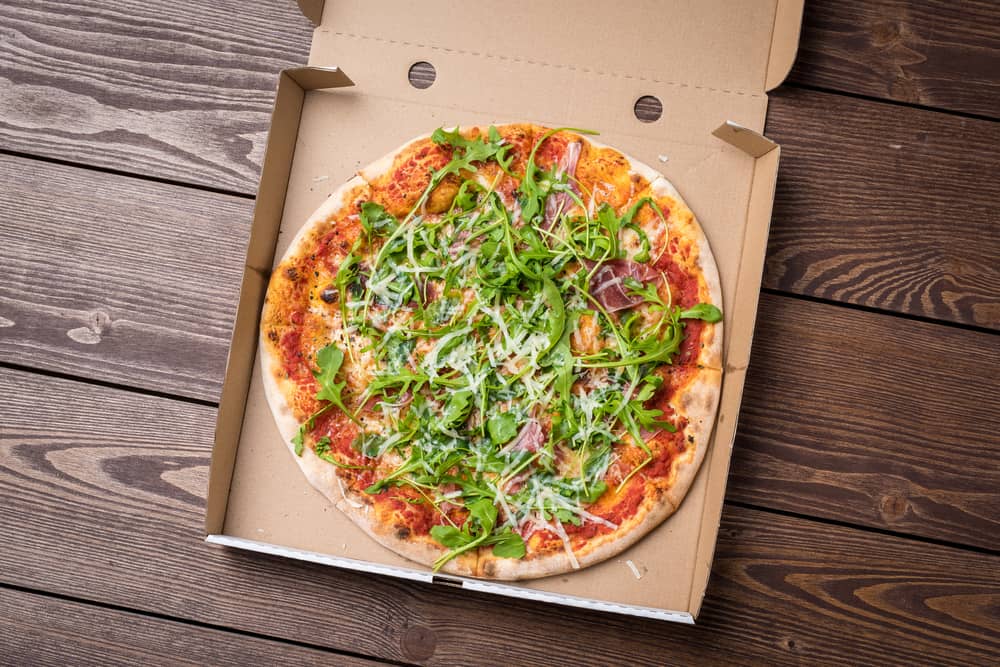 We have seen some commentators suggest that having a round pizza in a square box actually protects the pizza. The argument goes that the extra space at the corners keeps it from sliding around in transit. And that prevents your pizza from getting dented.

This doesn’t make a lot of sense, however. A round pizza in a box that’s too big for it will slide around, whether that box is round or square.

And because the pizza is a different shape to the square box, you’ll never get a perfect fit. The best you’ll be able to get is a pizza that’s the same diameter as the length of the box.

The problem with pizza boxes 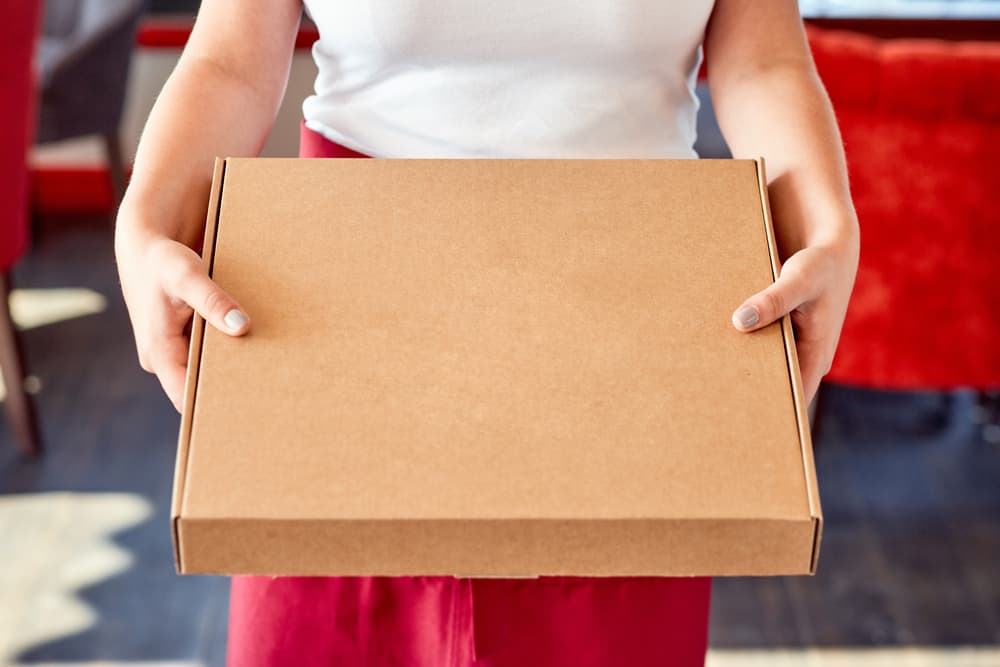 Almost all pizza boxes out there are square and made of cardboard. But we’re starting to realize that this isn’t a very environmentally sustainable option.

About 2 billion pizza boxes are used every year in the USA alone. And even supposing half of the cardboard used for them comes from recycled fibers, that’s still a lot of trees. In fact, it takes well over 4 million trees to provide all that fresh cardboard.

And because not all pizza boxes can be recycled, many of them end up in landfills after just one use. That makes those seemingly innocent cardboard boxes a big problem.

So what can be done about it?

One company seems to have come up with an answer – and that answer is round.

The pizza box of the future 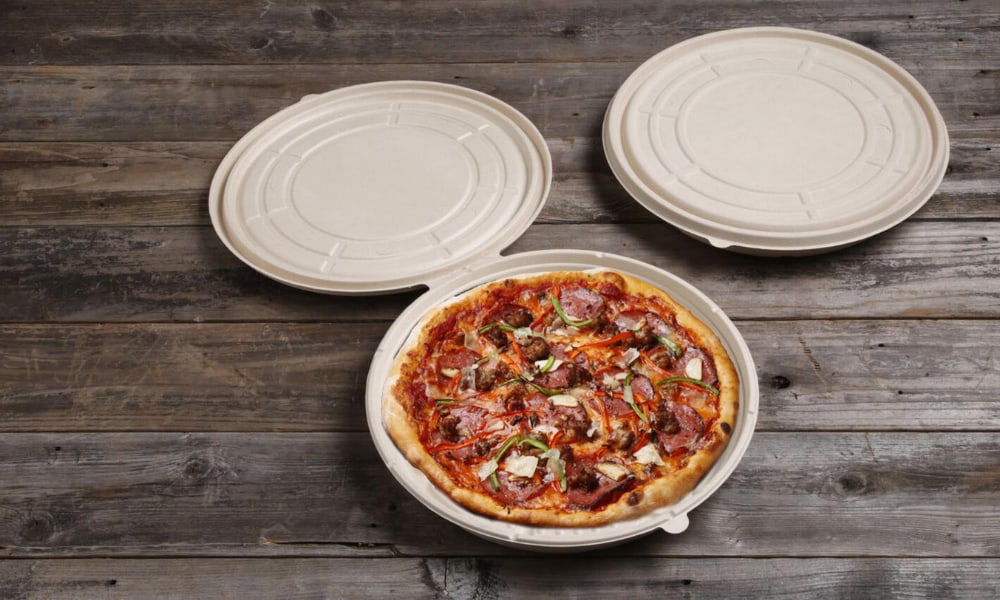 World Centric have come up with a brand new take on the pizza box. This version is made from plant materials instead of cardboard. And the fibers are from renewable sources like bamboo.

Unlike most trees, bamboo grows very quickly. In fact, it’s one of the world’s fastest growest plants, capable of growing between 3 and 5 feet every year. So the bamboo used for World Centric’s pizza boxes will be replaced very quickly.

Like cardboard pizza boxes, these are designed to be used once, then thrown away. But the great thing about them is that they are completely compostable.

That means you won’t have to pick off food scraps or remove greasy parts of the box before recycling it. Simply put the whole thing, together with your pizza crumbs, into your food waste or green bin. It can then be used to make compost that will help new plants and crops grow strong and healthy.

But what, you might be wondering, does all this have to do with why round pizzas come in square boxes? Well, whilst they’ve been putting right every other problem with traditional pizza boxes, World Centric has solved this one too!

They’re currently available in two different sizes, with diameters of 12 and 14 inches. That’s perfect for a small or regular pizza for one person. And because the box can be matched to the size of the pizza, you’ll never have to worry about it sliding around inside. It’s a work of genius!

The idea is so good that other manufacturers are bound to follow World Centric’s lead very soon. So who knows – it’s possible that the days of the square cardboard pizza box are numbered. Perhaps, after all, we can look forward to round pizza in round boxes!

And if you’re worried about the fate of Sicilian pizza – don’t be. World Centric also makes two sizes of rectangular flat bread or pizza boxes too. So whatever type of pizza you love, you’ll be able to choose a planet-friendly container.

Pizza boxes are square because that’s the shape that’s easiest to make. And square boxes can be easily and cheaply stored and transported.

Most pizzas, on the other hand, are round because of the method of stretching the dough. And because the shape allows the crust to be cooked evenly all over.

But perhaps the days of round pizzas in square boxes are coming to an end. There are some exciting innovations out there, using plant-based materials to produce compostable packaging. And with the first new pizza boxes taking a circular form, perhaps that’s the shape of things to come! 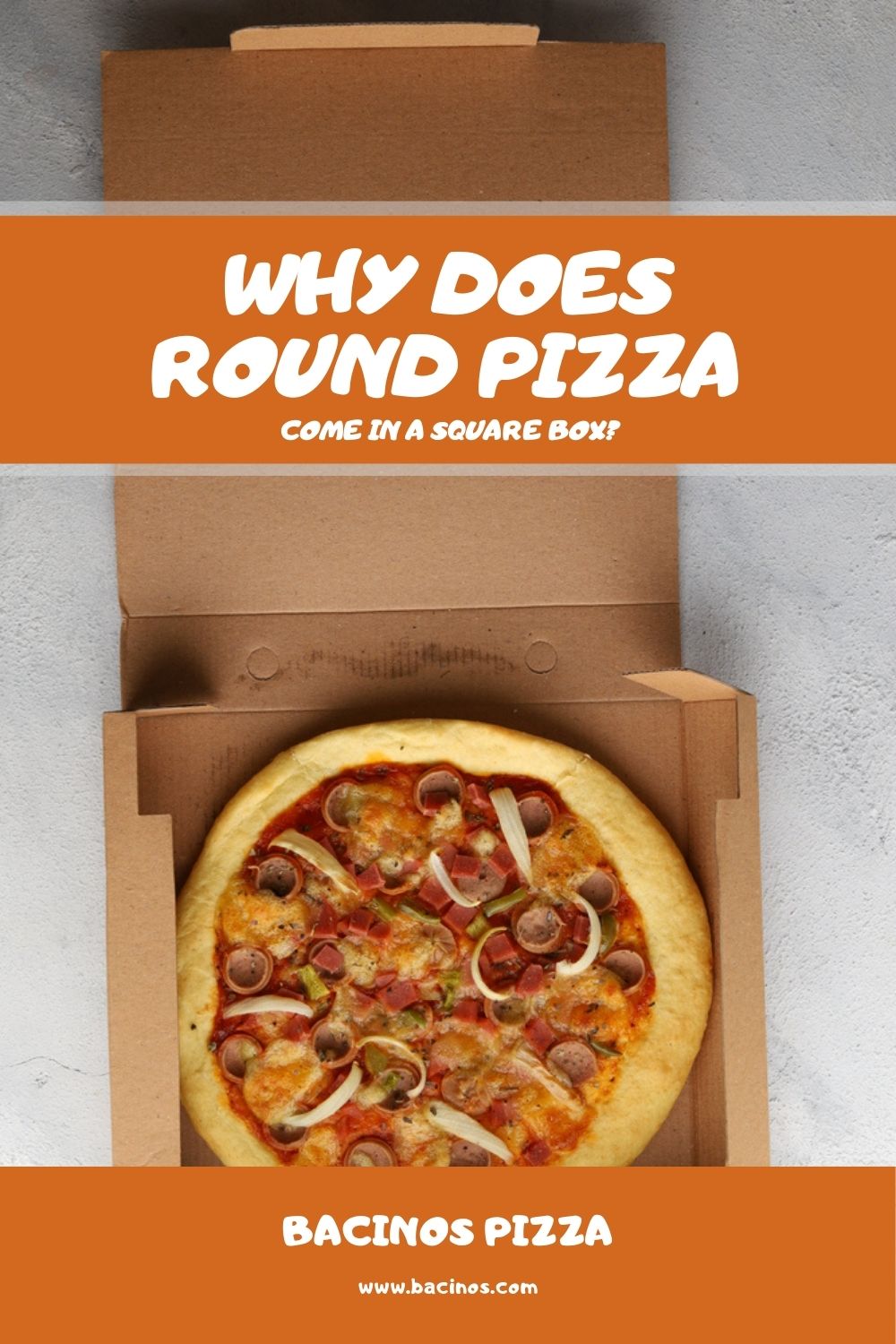