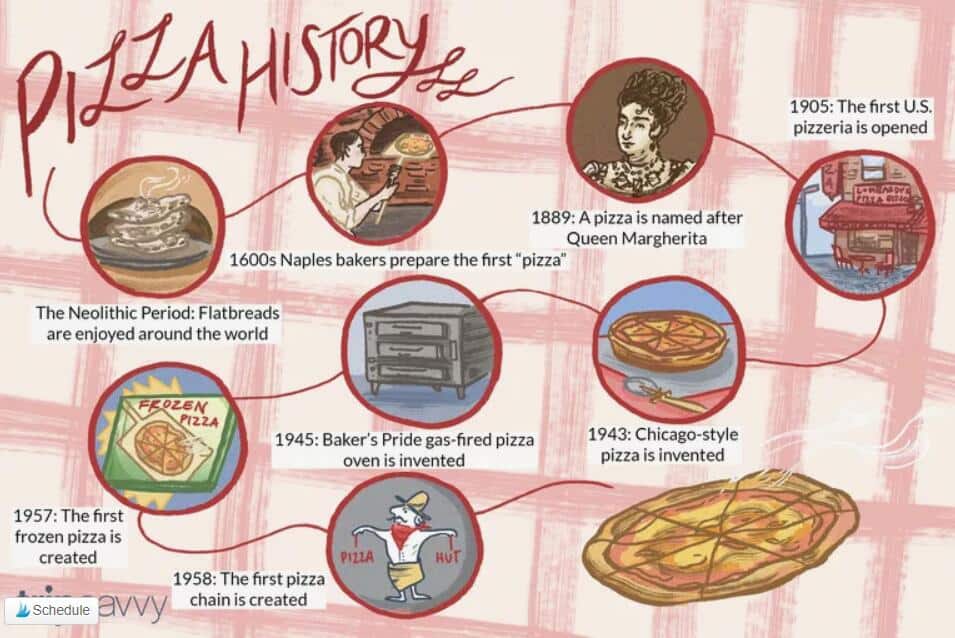 It’s your go-to after a night out with friends, when watching a movie with a loved one and a perfect Sunday meal for a family choosing to stay in for the weekend. 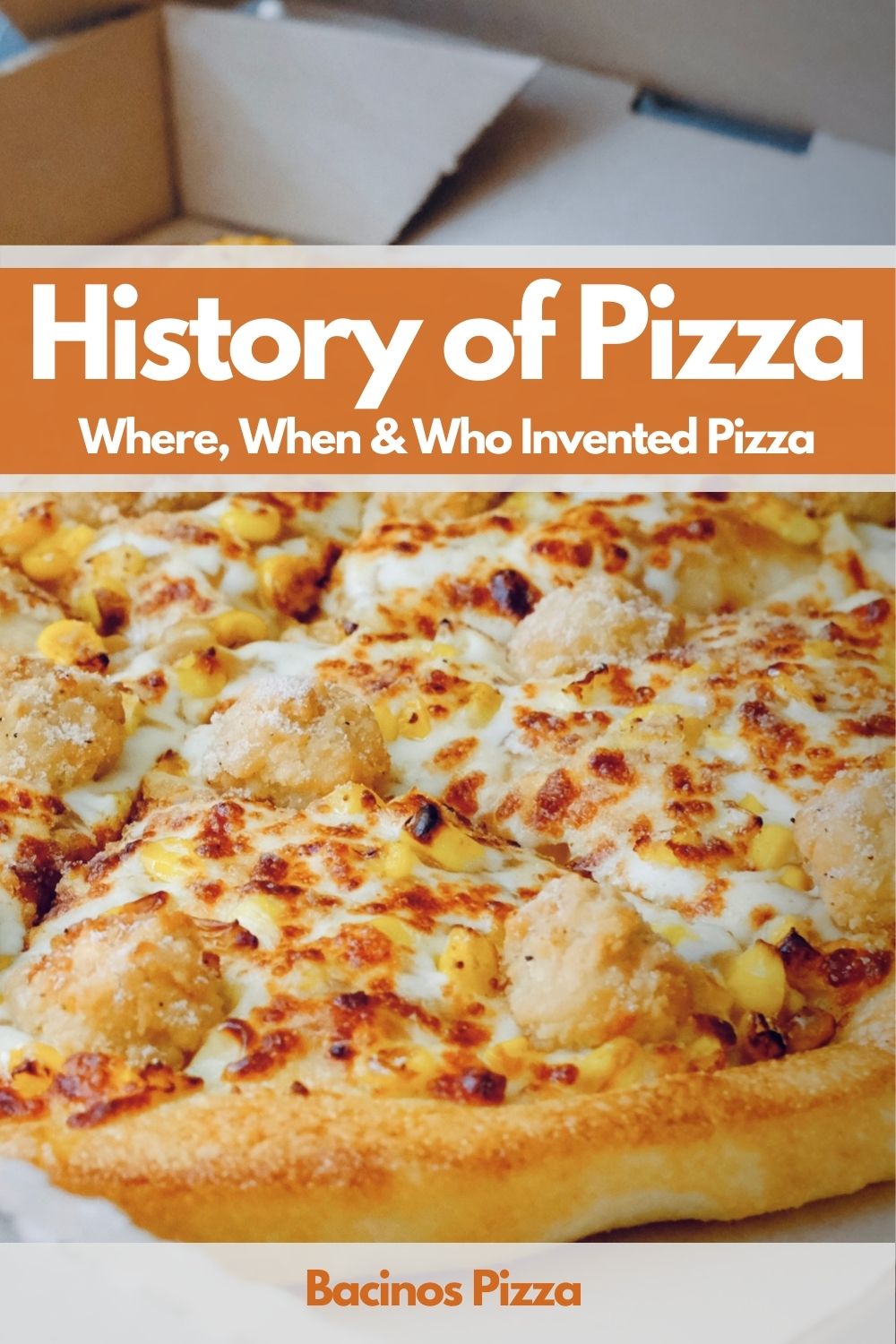 Historians trace one of the world’s most popular fast food to centuries ago from Hawaiian, Margherita, Pepperoni to Veggie pizza.

Where and When Was Pizza Invented?

A Latin document written in a small Italian village might be the earliest reference to pizza.

The idea of flatbreads with toppings is not an entirely new one. It dates back centuries ago when the Romans, Greeks, and Egyptians ate their bread in that form. They would place it on a hot stone or in mud ovens to make the bread, then they would spread their toppings, such as herbs or mushrooms, on the flatbread.

An interesting finding was a record of how soldiers baked flatbreads in ancient Persia. Their shields were their ovens.

In fact, in the 1st Century B.C., a Roman poet is found to have talked about circles of bread thought to look like a pizza. People cooked Pinsa on hot ashes in ancient Rome, and it comes closest to modern-day pizza.

Years later, in the 18th century, pizza would be born in Naples, a town in Italy. The pizza was not the delicacy it is now. In those days, Naples’s people ate pizza, which was just a flatbread with toppings, because it was cheap. Why? They were poor, and this was all they could afford. They couldn’t go to work on a hungry stomach, and one would see them munching these slices on their way.

At the time, the shops would not sell this poor man’s dish. No. Only street sellers would carry them around slicing pieces as small as a buyer could afford. According to their budget, the makers would use minimal toppings, sometimes only garlic and two others to meet a customer’s need.

With this ‘modern’ pizza of the 18th century, Italians introduced tomatoes to give it that flavor that has become a favorite. The interesting thing is that in those days, people thought tomatoes were poisonous.

However, America exported lots of tomatoes to Europe, encouraging people to use them as toppings after seeing they were safe to eat. Furthermore, the tomatoes came in handy due to their cheap nature, and they did not require much skill to cook.

As if to solidify a blended culture, pizza’s leap into fame came in just when Italy became unified. On their visit to Naples, King Umberto I and Queen Margherita were intent on trying out an Italian dish. They needed to break away from their usual French meals.

Legend has it that Italian Raffaele Esposito was the first to make that premier delicious pizza. Pizzeria di Pietro was the place where he did his magic. It is safe to say it was royalty commissioned. In 1889, the queen was visiting Naples.

To honor her, the leaders instructed Raffaele to make the signature food. Queen Margherita would get her dish, served as different types of pizza. They say after sampling each slice of the finger-licking goodness, she gave one a thumbs-up. A pizza whose ingredients had the colors of the Italian flag was her favorite. Italy named the pizza after her.

This approval would mark the beginning of a more respected pizza. That a queen can eat food considered to be for the poor, and like it meant this dish was truly Italian. Pizza soared, and Italians saw it as their own, ranking it in the same league as their beloved pasta.

However, it was not until 1830 that Naples got its first pizzeria – Antica Pizzeria Port’Alba. Pizza’s fame had not spread to the rest of the world as it remained contained in Italy’s borders. The lack of fame was the case until tourists visiting Italy asked for local cuisines.

The bakers offered them pizza. Therefore, this fast food got yet another leap. Pizza marinara is a memorable one, for it was among those sought by tourists who had heard of its goodness. Often made by seamen’s wives, it would have oregano, garlic, and tomato toppings.

Increased popularity came at a cost, and people had to pay more for the delicacy as chefs began experimenting with a wider variety of toppings.

The love for pizza grew so much, Italians ate the dish at every meal. The new-found love happened by the close of the 19th century.

Who were among the people who enjoyed this taste of heavenly goodness? World War II veterans. Italians might as well have the soldiers to advertise it as they spread the word on the value of Italian pizza. Other spreaders of the pizza gospel were immigrants who took the story to the United States.

Soon, people stopped seeing the food as a poor man’s delicacy and an Italian-only treat, and the rest of America gradually began embracing it. Italian immigrants, proud of their roots, sold pizza on the streets. People would meet in pizzerias to talk and eat as pizzas became more popular. 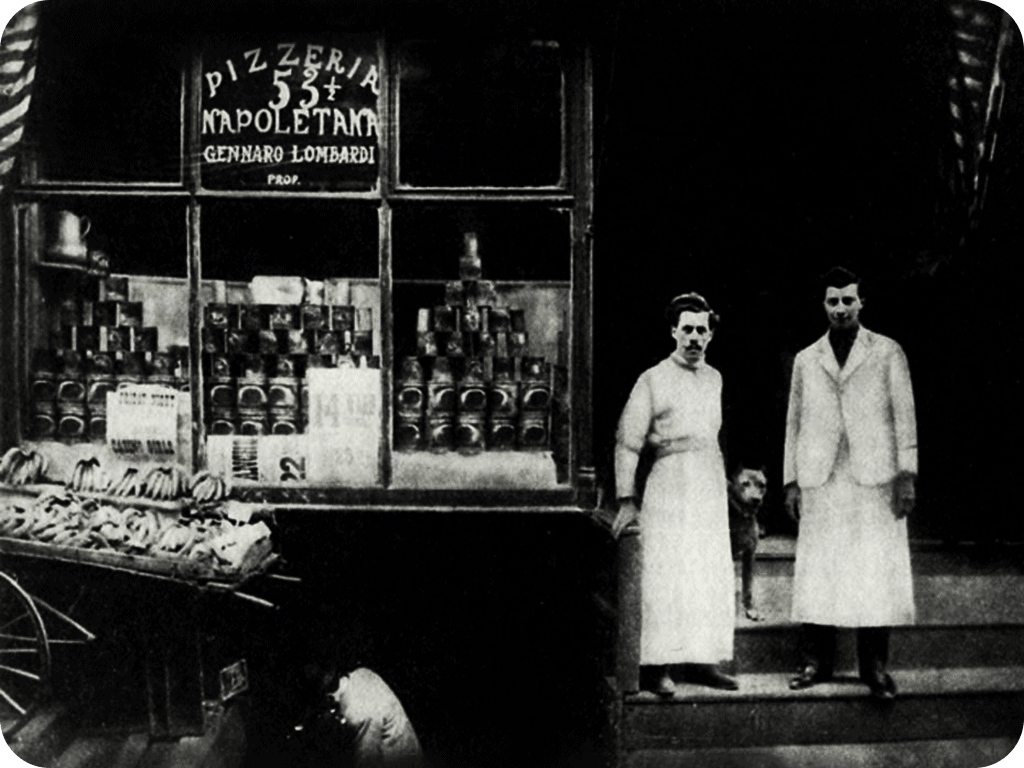 In 1905, Americans tasted their pizzeria when Gennaro Lombardi decided to open the first restaurant dealing in this delicacy in North America. Lombardi got the first American license to bake the dish. The popularity was thanks to street vendors who would sell pieces that they kept hot in charcoal-filled drums.

These restaurants would later mushroom in the USA, with Ric Riccardo Sr. following in Lombardi’s footsteps. He, however, started with a deep-dish pizza. It was Ira Nevin who gave pizza bakers an easier time in 1945. His invention of a gas-fired pizza oven removed the high cost and the inconvenience of using wood or charcoal.

The 1950s were a good time for this pie to flourish as the pizza restaurants’ premier chain was opened. It was also in the 50s that pizza chains opened, starting with pizza Hut in 1958. Little Caesar’s followed in 1959, and in 1960 Domino’s joined the fray.

In the middle of this pizza hullaballoo in the 50s, somebody realized that they needed to prolong the shelf life of pizza and started freezing it. Supermarkets took up the mantle and began stocking frozen pizza. Of course, by this time, people were making more money and could afford fridges and freezers, meaning they could also save some pizza at home.

Americans were also a busier population as the economy transformed, and fast food became the in-thing. People now sought convenience foods, and to meet this new need to keep pizza longer, bakers started using tomato paste instead of fresh tomatoes.

World War II men looking to relive their days of pizza eating in Europe were not the only ones to thank for the spread of the choice food. Celebrities who had their roots in Italy, such as Jimmy Durante, played a part too. 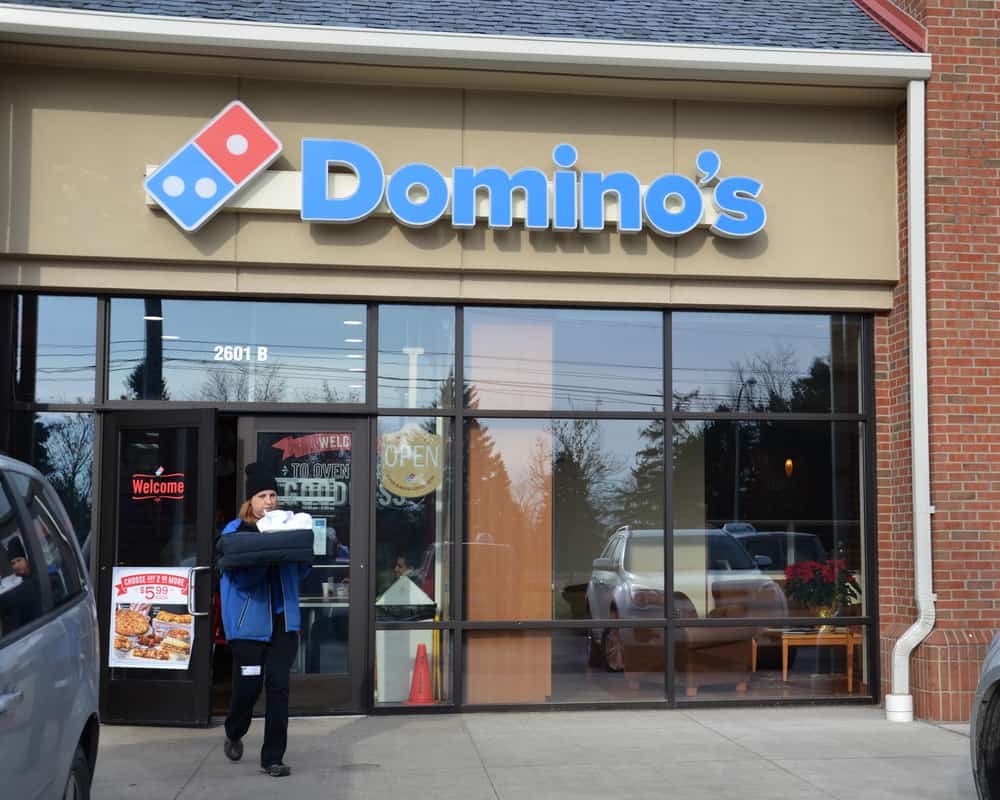 Also, the availability of cars increased, and eateries could deliver pizza to homes. Domino’s, then named Dominik’s, became a darling with buyers due to their prompt delivery times.

Pizza delivery became such a common phenomenon that even the U.S. Army used it, not for food purposes, though. Records show that America sent dressed as fake delivery guys.

Americans gave pizza its second home and as more cities sprouted, so did the need for fast food. The bakers tweaked it a little to meet the tastes of the new American market.

It was about this time that the Chicago style pizza was born with a deeper, chunkier crust. Then, Colorado got the Rocky Mountain Pie. Its lovers would enjoy it with honey.

It was in the 90s that Kraft made a discovery. He came up with the first self-rising crust.

Naples did get recognition for being the modern birthplace of pizza when the European Union in 2009 ruled that theirs was a cultural food heritage. The ruling indicated that whoever wants to create a real Neopolitan pizza must not deviate from the standards to avoid messing up the original masterpiece.

To top it all up, the world got a sight of the largest pizza in 2012, measuring more than 1,260 square meters.

Today, over 70,000 pizzerias offer the U.S. delicacy, not to mention its popularity across the world.

Although pizza has long winding roots from ancient Greece through Italy to the rest of the world, it is genuinely most people’s delight. With every slice comes a rich history of different parts of the world. Social, economic, and cultural markings are baked into pizza’s goodness.

Over time, the toppings have changed to accommodate the different cultures of the world. Despite bakers from all over the globe now custom-making the pizza, the bottom line remains the same. Every good pizza has a crust that holds it all together. 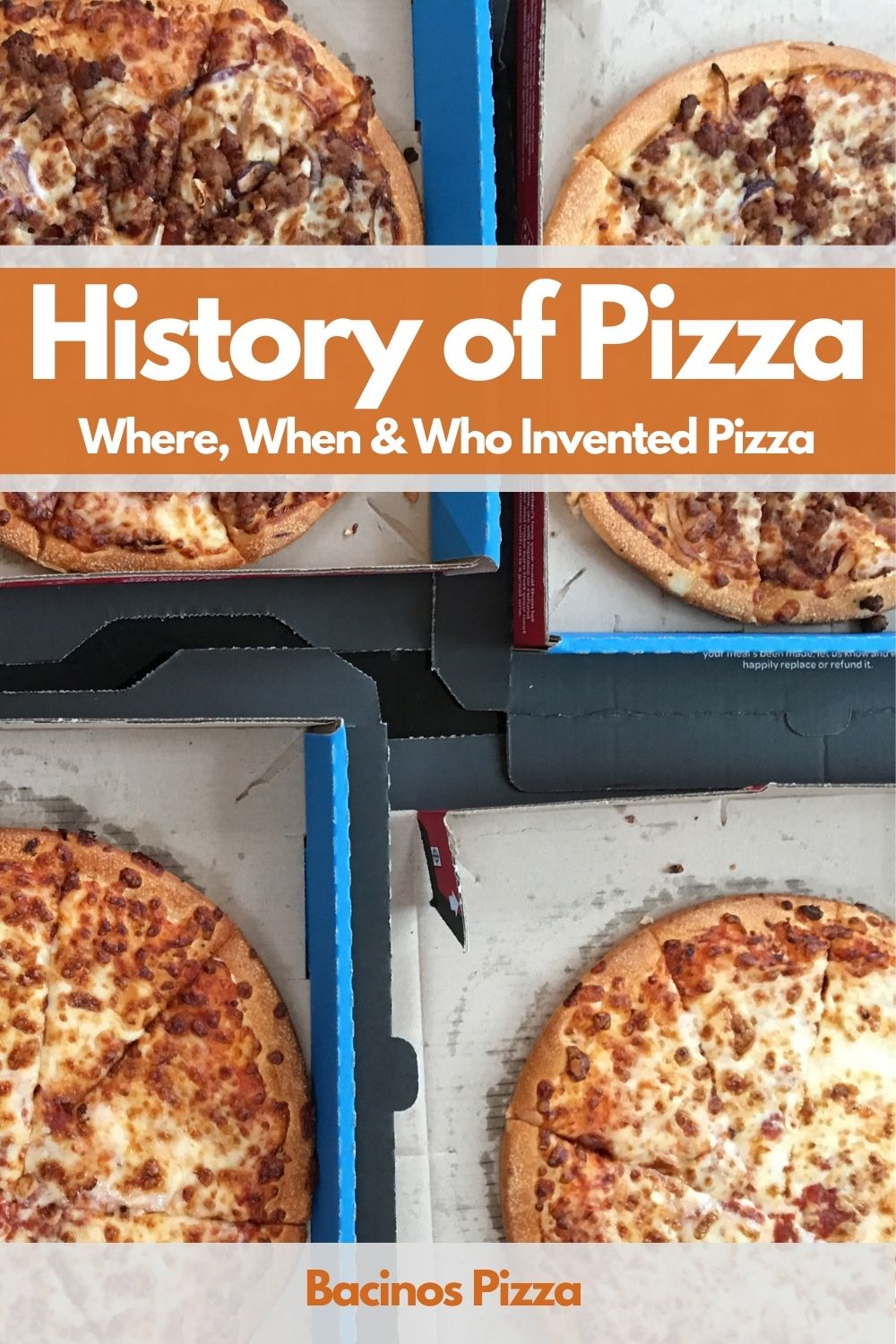 3 thoughts on “History of Pizza: Where, When & Who Invented Pizza”