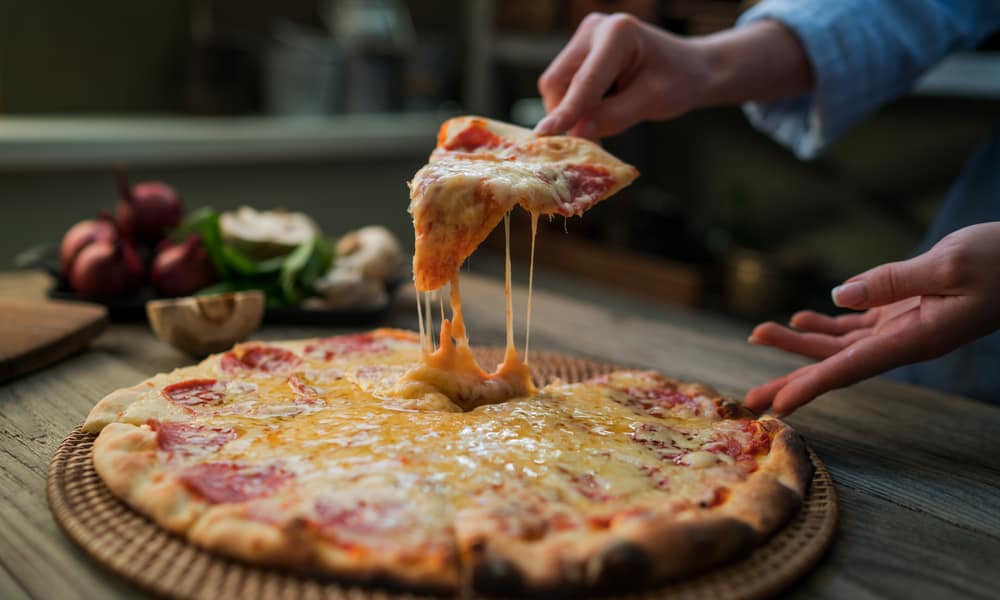 You’re about to settle down for the evening with a good film and a cold beer or glass of wine. Only one more thing is needed to make the night complete – a delicious pizza! 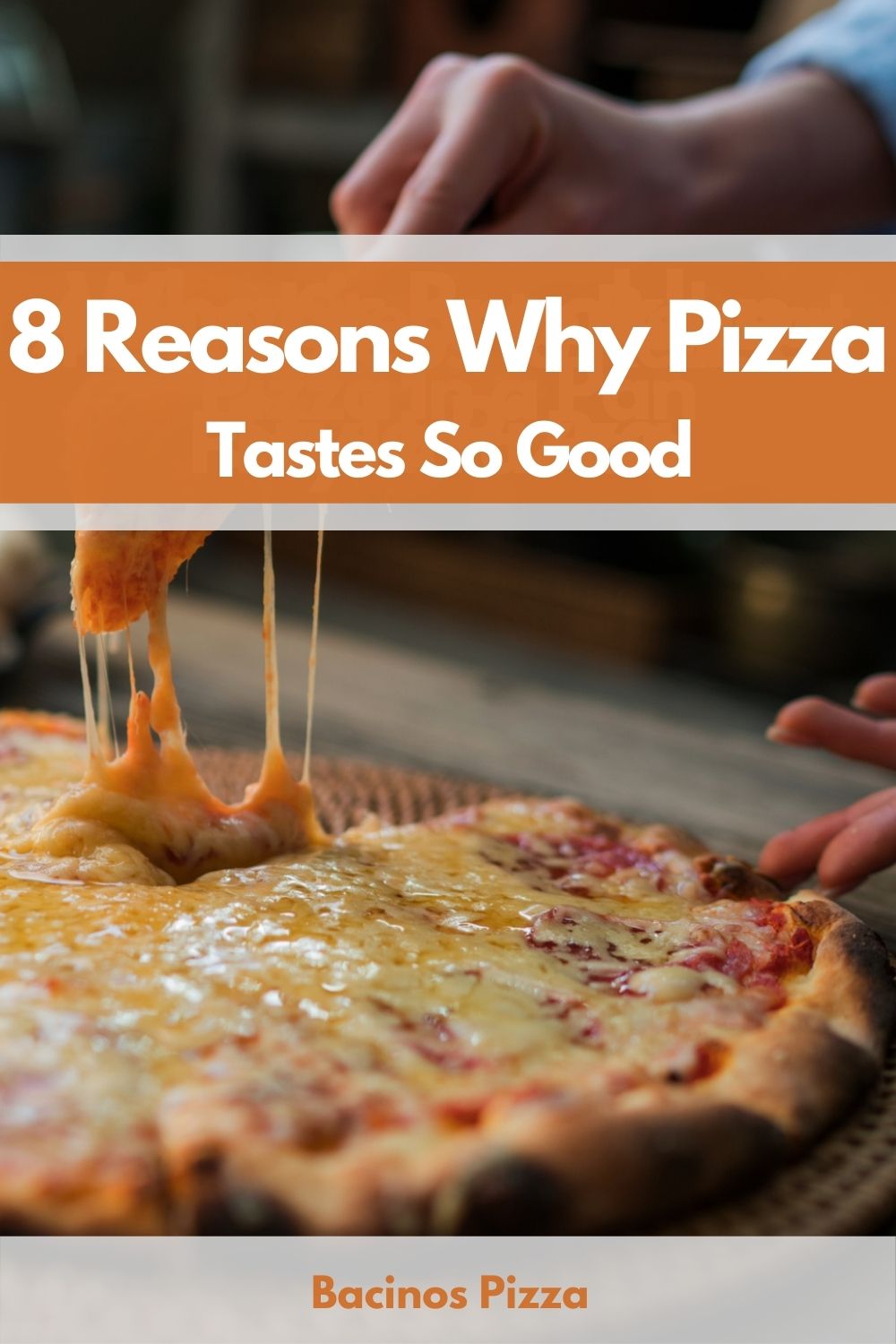 But why does pizza taste so good? We’re going to investigate the science behind our craving. And when we’ve finished, you’ll understand just why that extra slice is calling to you!

So step this way to find out more …

The love affair with pizza 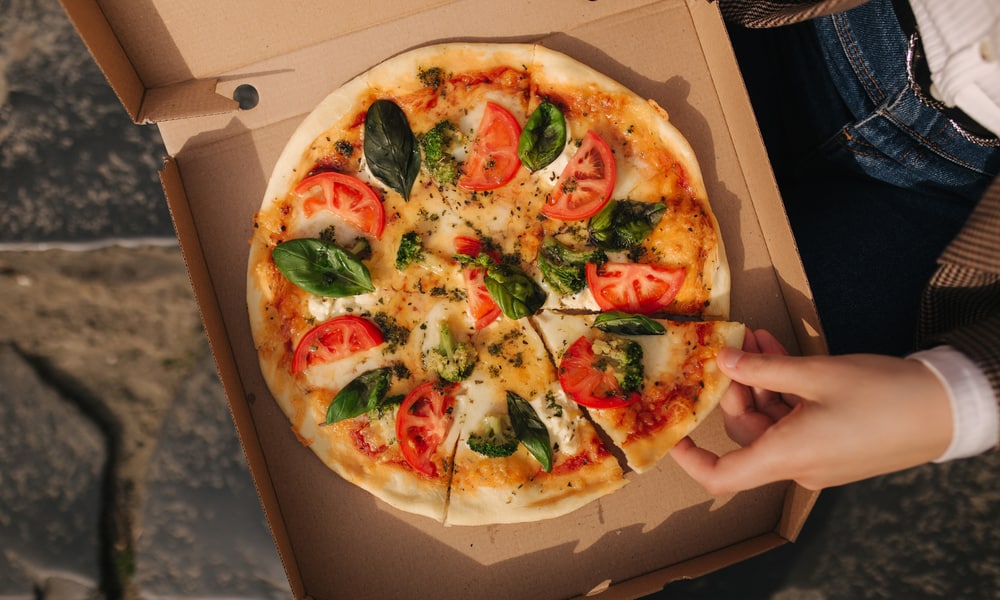 Pizza is one of the most popular foods on the planet, and particularly here in the USA. Americans eat 3 billion fresh and a billion frozen pizzas every single year. That’s an average of 23 pounds of pizza per person!

The passion began with Italian immigrant Gennaro Lombardi. He began selling pizzas in his New York grocery store in 1895. His pies proved so popular with local workers that he soon ditched the groceries and dedicated his store to pizza.

At first, most pizza buyers were Italians who’d emigrated to the States and were looking for a taste of home. But that changed with the Second World War. American GIs stationed in Italy grew to love the local delicacy, and brought their appetite for pizza home with them.

Soon, pizzerias were springing up all over the country. And it’s a trend that’s continued to this day. Today, there are over 78,000 pizzerias across the USA.

So just what is it about pizza that makes it so appetizing? 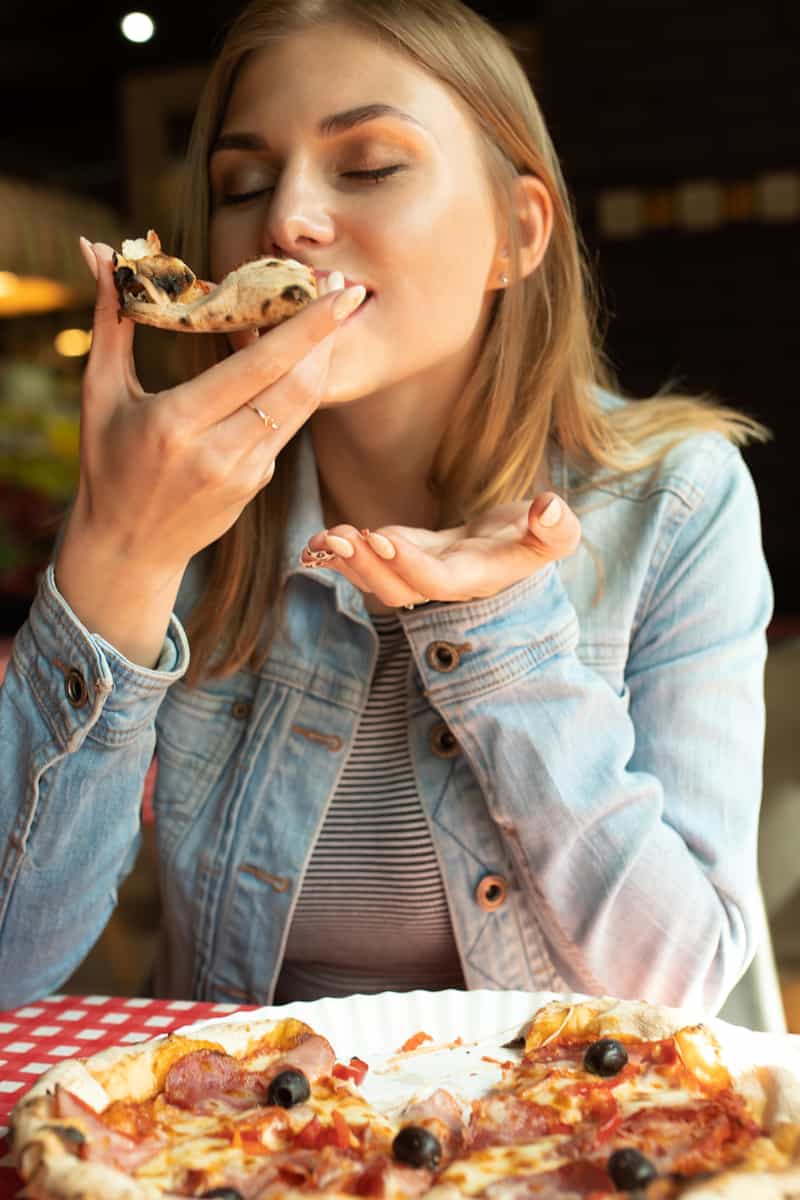 To answer this question, we first need to understand how our taste buds work.

Our taste buds live inside the tiny bumps, called papillae, that cover our tongues. An adult will have between 2,000 and 8,000 tastebuds in their mouth.

Each tastebud in turn has between 10 and 50 flavor receptor cells. Some of these cells have proteins that bind to the chemicals in our food. Others contain ion channels which are activated when they come into contact with certain chemicals.

Each type of receptor cell is triggered by a different combination of chemicals. They then send messages to the brain, telling it what kind of flavor we’re experiencing.  There are five different flavor groups: sweet, sour, salt, bitter and umami. (Umami is a Japanese word that means savory and delicious.)

So what does all this mean for the experience of eating pizza? Let’s explore the reasons it tastes so good. 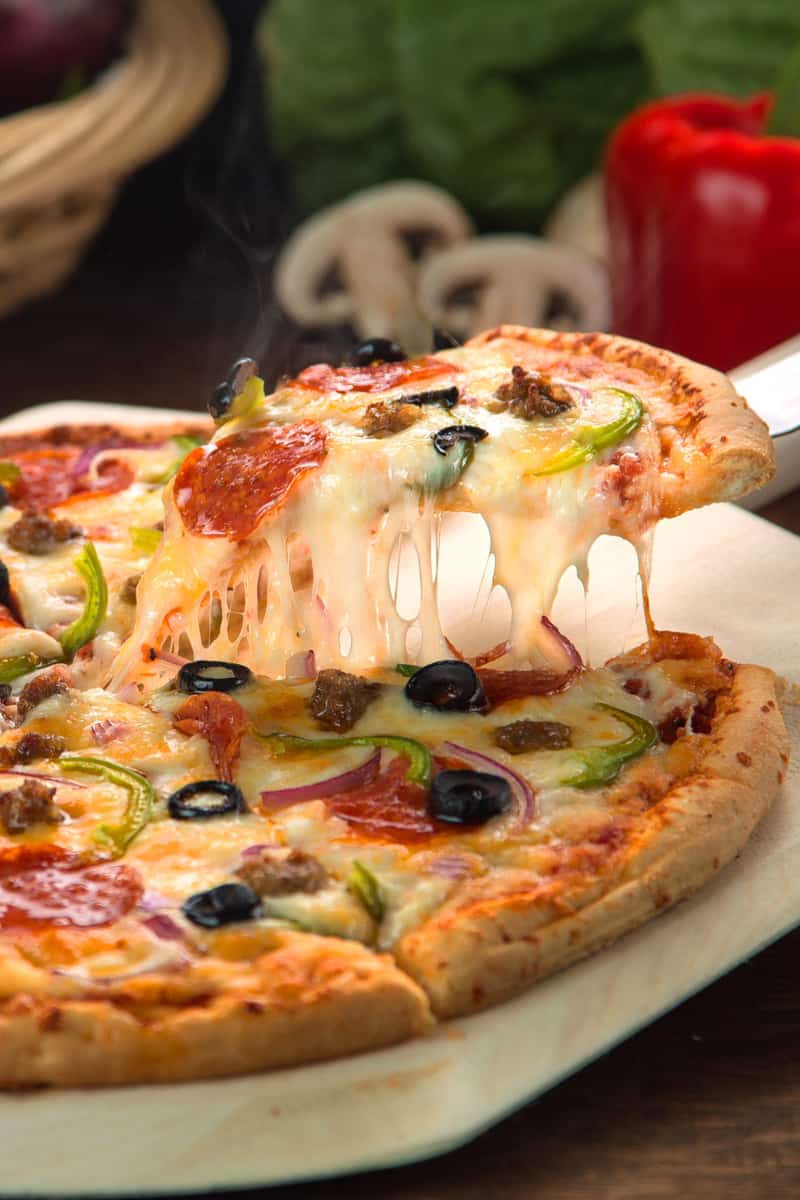 Pizza is packed full of glutamate, making it umami heaven! Cheese and tomatoes, the staples of any pizza topping, are both high in glutamate. The same goes for meats – so perhaps it’s not surprising that pepperoni is America’s most popular pizza topping.

Other common toppings can top up the glutamate levels even more. Parmesan, mushrooms and corn are all high in glutamate.

And when glutamate hits our taste buds, we almost immediately crave more of it. That’s why it can be so difficult to say no to that extra slice of pizza. 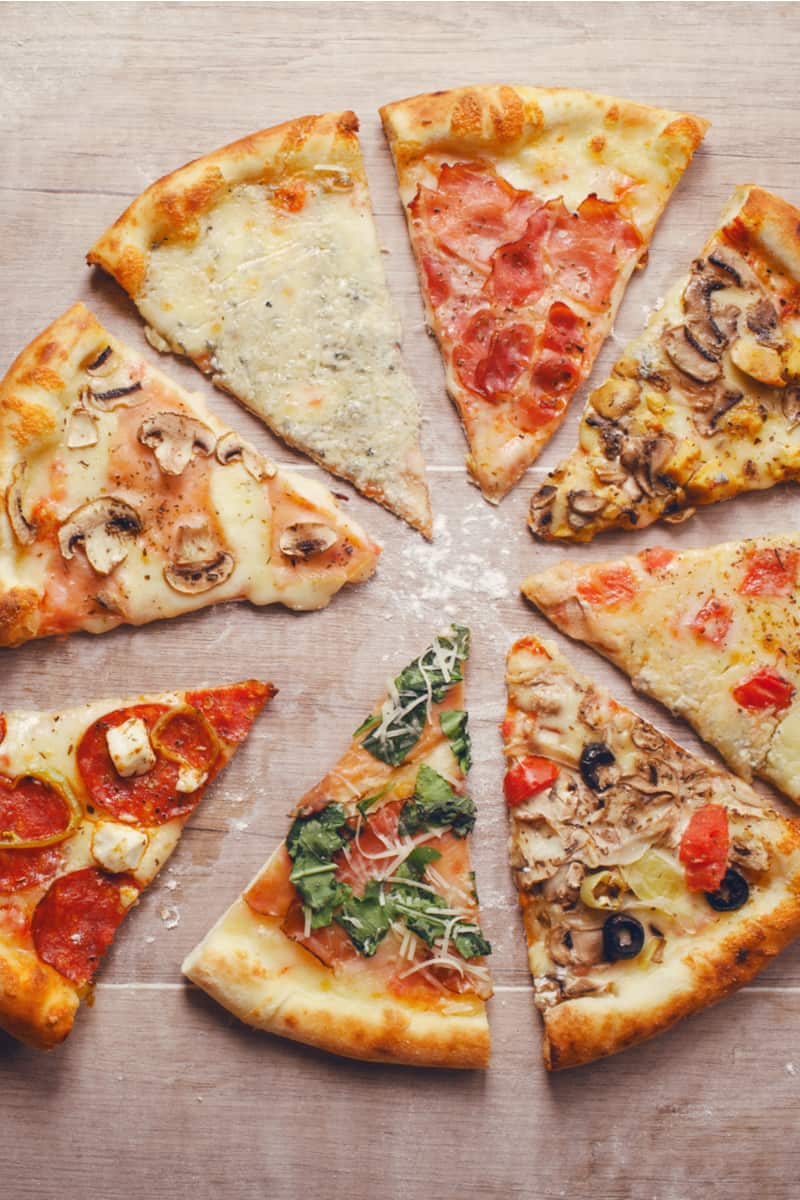 If that wasn’t enough, some food scientists believe that pairing food with similar flavor compounds makes them even tastier. And the more compounds foods share, the better they will complement one another.

So what does this mean for pizza? Well, mozzarella, tomatoes and parmesan all contain 4-methylpentanoic acid. That means that, according to food pairing theory, they’re a match made in heaven!

Perhaps the best known proponent of food pairing theory is British chef Heston Blumenthal. His restaurant, The Fat Duck, has won no fewer than three Michelin stars. But not everyone is convinced.

A 2011 study by a group of Cambridge scientists looked at whether popular recipes around the world used flavor pairing. They found that, while it was common in North American cuisine, it was barely found in East Asian cooking.

So perhaps food pairing owes more to cultural norms than anything else. Either way, we love tomato and cheese on our pizza! 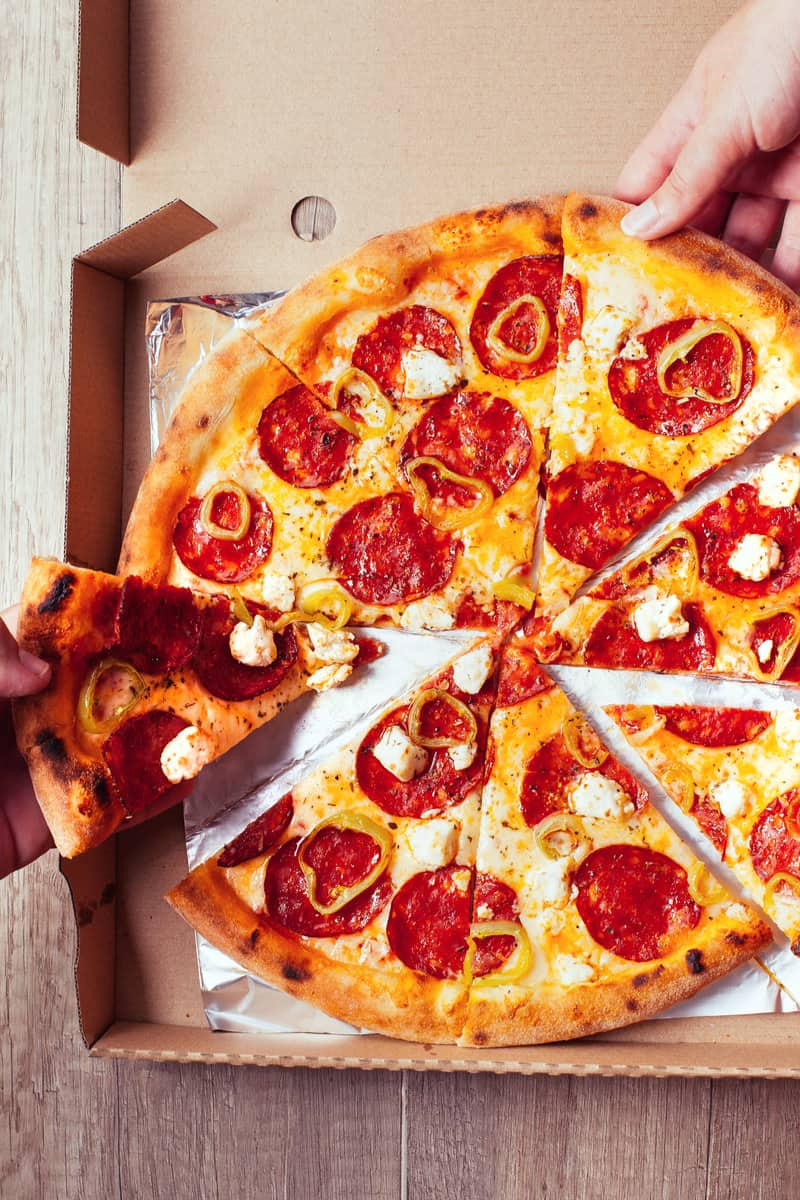 You know that saying about “the first bite is with the eye”? Few people would deny that pizza looks delicious. One look at that steaming crust and cheesy topping, and our stomachs start to rumble! But what is it about the appearance of pizza that gets our digestive juices flowing?

Well, one answer is that lovely golden topping. It’s a result of the Maillard reaction, named after a French scientist called Louis-Camille Maillard.

In 1912, Maillard wrote a paper that looked at the way sugars reacted with amino acids at high temperatures. It was to become one of the foundations of food science.

But what is the Maillard reaction? Well, it describes what happens when high-protein foods – like meat and cheese – are heated at high temperatures, as in an oven. The amino acids that make up the protein react with the sugar that’s also in the food. The result is a change in color, texture and flavor.

Cheese melts, bubbles and turns golden. Pepperoni turns brown and curls up at the edges. And those lovely cooking aromas that herald the arrival of your pizza? They’re a result of the Maillard reaction too.

We associate those visual changes with the improved aroma and flavor of cooked food. So our mouths are watering even before we’ve taken that first bite. 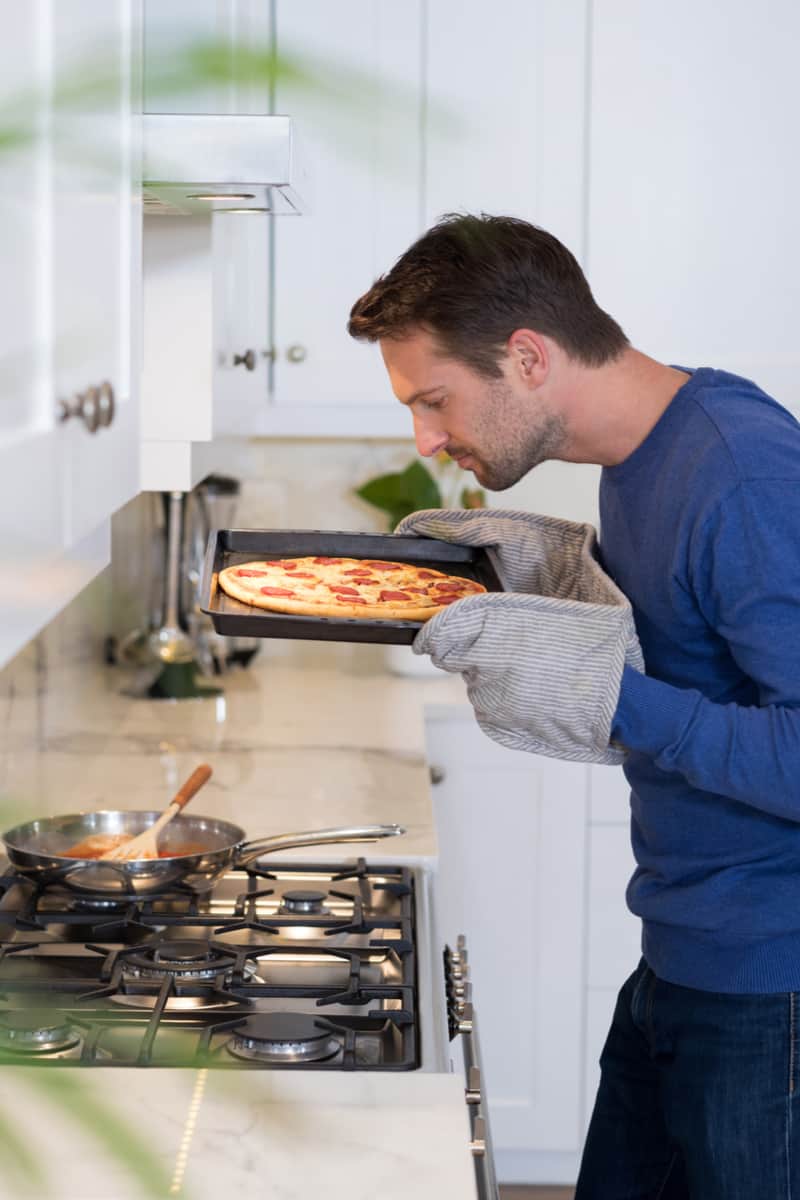 As well as getting us ready to eat that delicious pie, the smell of pizza also contributes to our sense of flavor. If you’ve ever had the disappointment of eating your favorite meal with a bad cold, you’ll know how this goes! When you can’t smell your food, you can’t taste it properly either.

That’s because chewing our food releases chemicals known as volatile compounds. These then make the journey from the back of our mouth to our nose. There, they stimulate our olfactory system, adding a whole extra dimension to the eating experience.

Reason 5: We love that crispy crust! 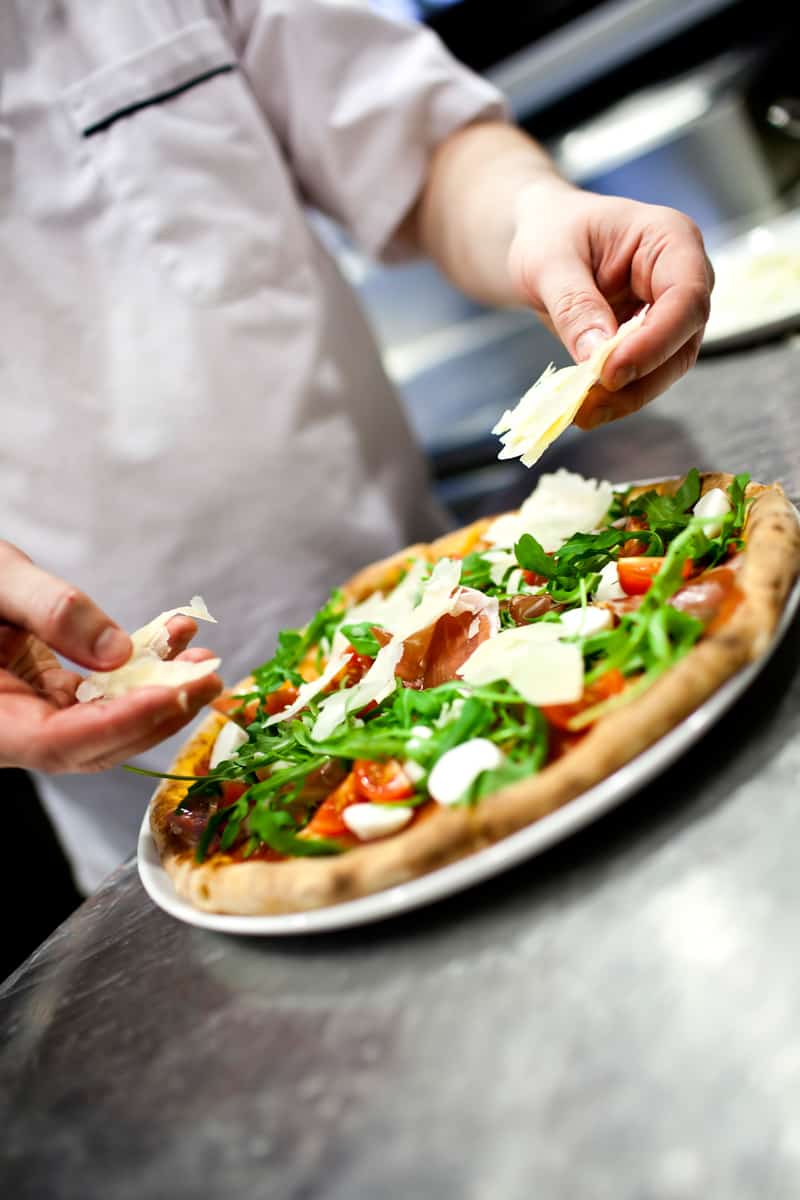 The science around the texture of food and how much we enjoy it isn’t clear. We do know that liquids are consumed more readily than solid food. But when it comes to pizza, the scientists don’t have much to say.

One thing we know for sure is that the contrast between that crispy crust and cheesy topping is a winner.

And there’s lots of choices when it comes to your crust too. Deep pan or thin crust. Sicilian or New Yorker. Stuffed, topped or plain. Whatever your preference, there’s a pizza to suit. You can even make your pizza into a romantic gesture by choosing a heart shaped crust on Valentine’s day!

Reason 6: Variety is the spice of life 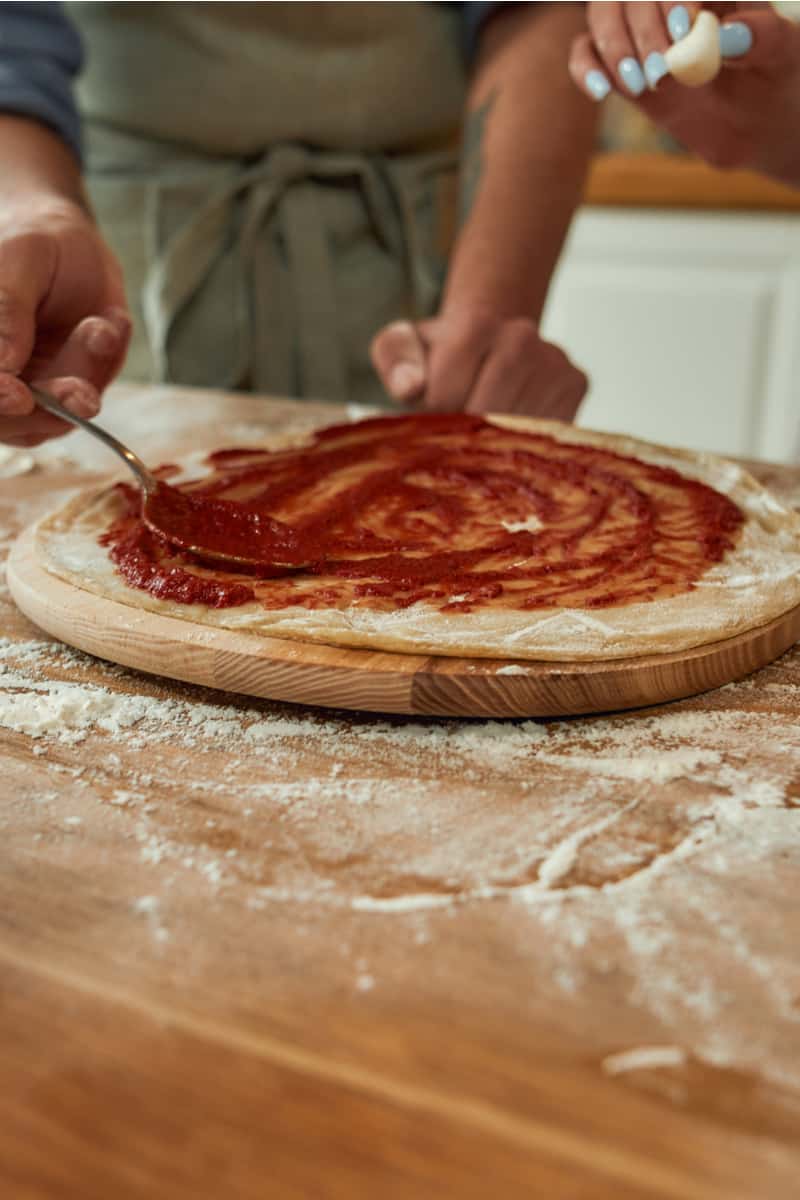 The variety in the types of crust on offer is just the start of the different options offered by pizzas. Tomato sauce and mozzarella might be the standard option. But if you fancy something different, why not choose Alfredo sauce and cheddar? Or pesto and feta? The world is your pizza oyster!

And of course, you can change your toppings too. Whether you fancy lean or processed meat, seafood or vegetables, herbs or even fruit, you can put them on a pizza. So while most of us have our favorites, there’s no excuse to get into a pizza rut.

By mixing things up, pizza stays fresh and interesting.

Reason 7: You can enjoy it hot or cold 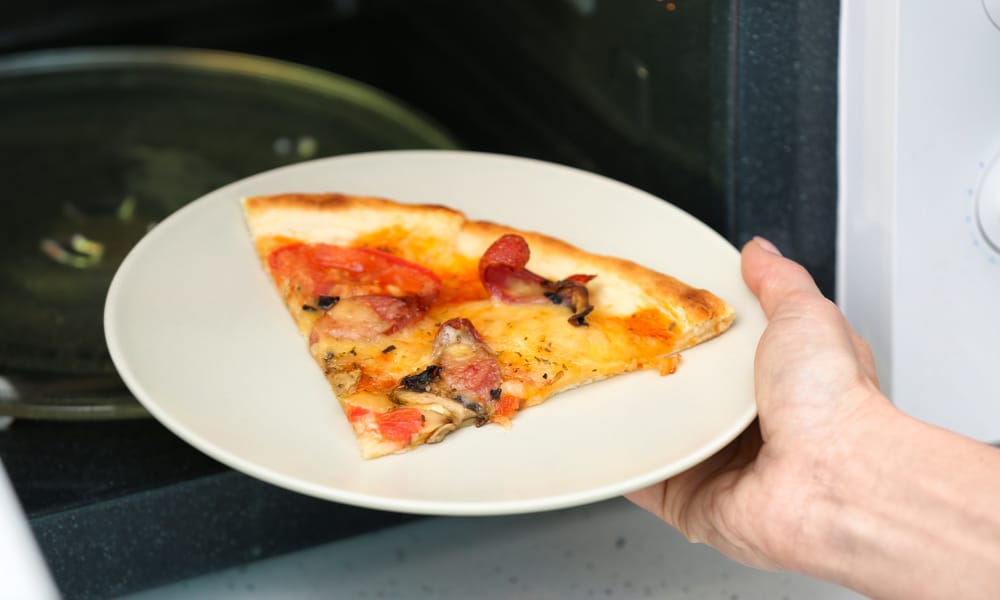 Pizza is one of those rare meals that tastes just as good cold as it does hot. So if you’ve got some leftover slices, put them in the fridge until the next day and avoid food waste.

Depending on your chosen topping, you may also be able to reheat your pizza too. A minute or so in the microwave and it will be piping hot once again.

Pizzas are also a great option to feed a crowd. A large pizza sliced into wedge shaped or rectangular slices is a tasty addition to any buffet. And your guests can continue to enjoy tucking into it when it’s cooled down.

For many of us enjoying a takeout or restaurant pizza, half the fun is having someone else prepare our food! If you’re taking a night off cooking, a pizza is an inexpensive and filling meal. And it tastes twice as good when there’s no preparation or washing up to do!

But if you enjoy cooking, it’s also a great option to prepare at home. You can opt for a traditional dough base, or mix things up with a French bread, tortilla or even a plant-based crust. And all the sauces and toppings will be under your control.

It needn’t take long to rustle up, especially if you’ve prepared your dough in advance. And keen cooks will enjoy the taste that much more because it’s all their own work.

So in summary – we love pizza!

There are a whole host of reasons why pizza tastes so good. A look at the science tells us the glutamate content makes it irresistible. Food pairing and the Maillard reaction may play a part too.

But there are a lot of simpler reasons we can all appreciate as well. That lovely crispy crust! The endless variation in style and toppings. And the sheer joy of being cooked for, or making something delicious ourselves.

Whatever the reasons, for most of us, pizza is a firm favorite. We hope you’re enjoying a slice very soon! 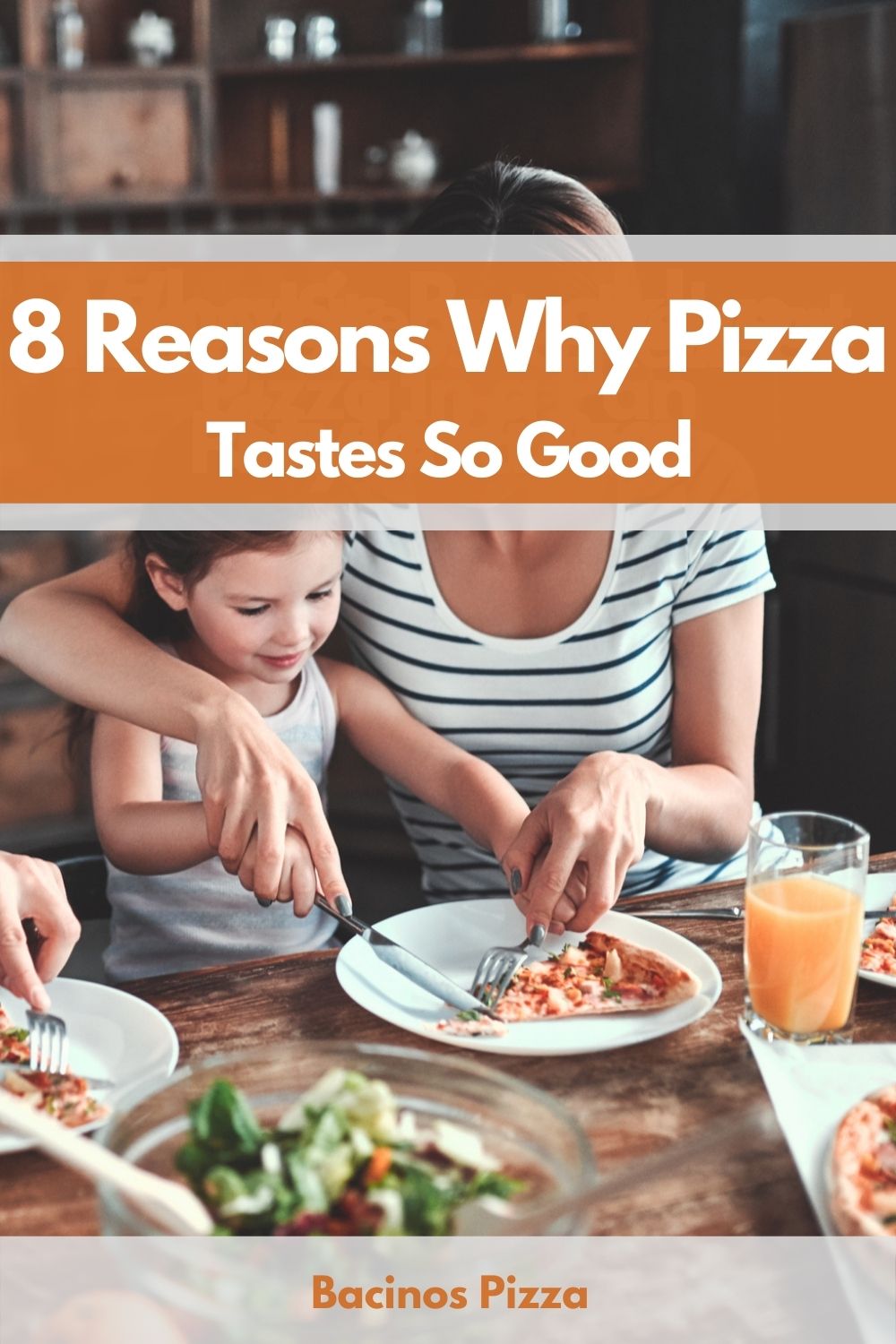