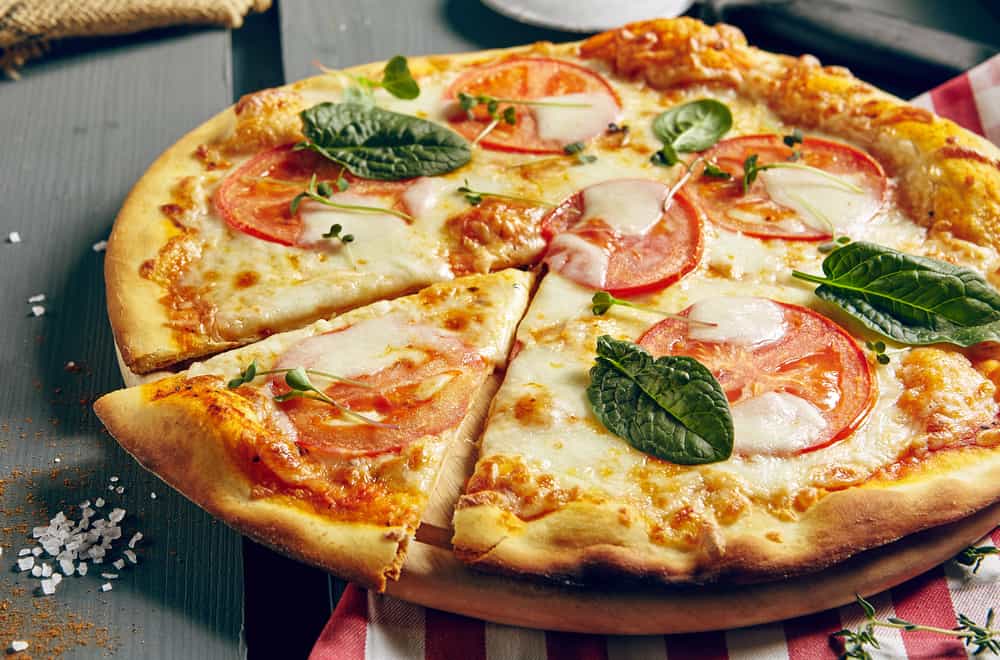 I am sitting at Gino’s East restaurant in Rosemont, Illinois, when I hear a voice from the loudspeaker, “Ticket number 23, your pie is ready.” At first, I am shocked, and I take another look at my ticket. Yes! It reads 23. So I am thinking by myself, “Wait a minute, did I order a pie or a pizza?” I walk slowly to the counter, and the attendant hands me a pizza. 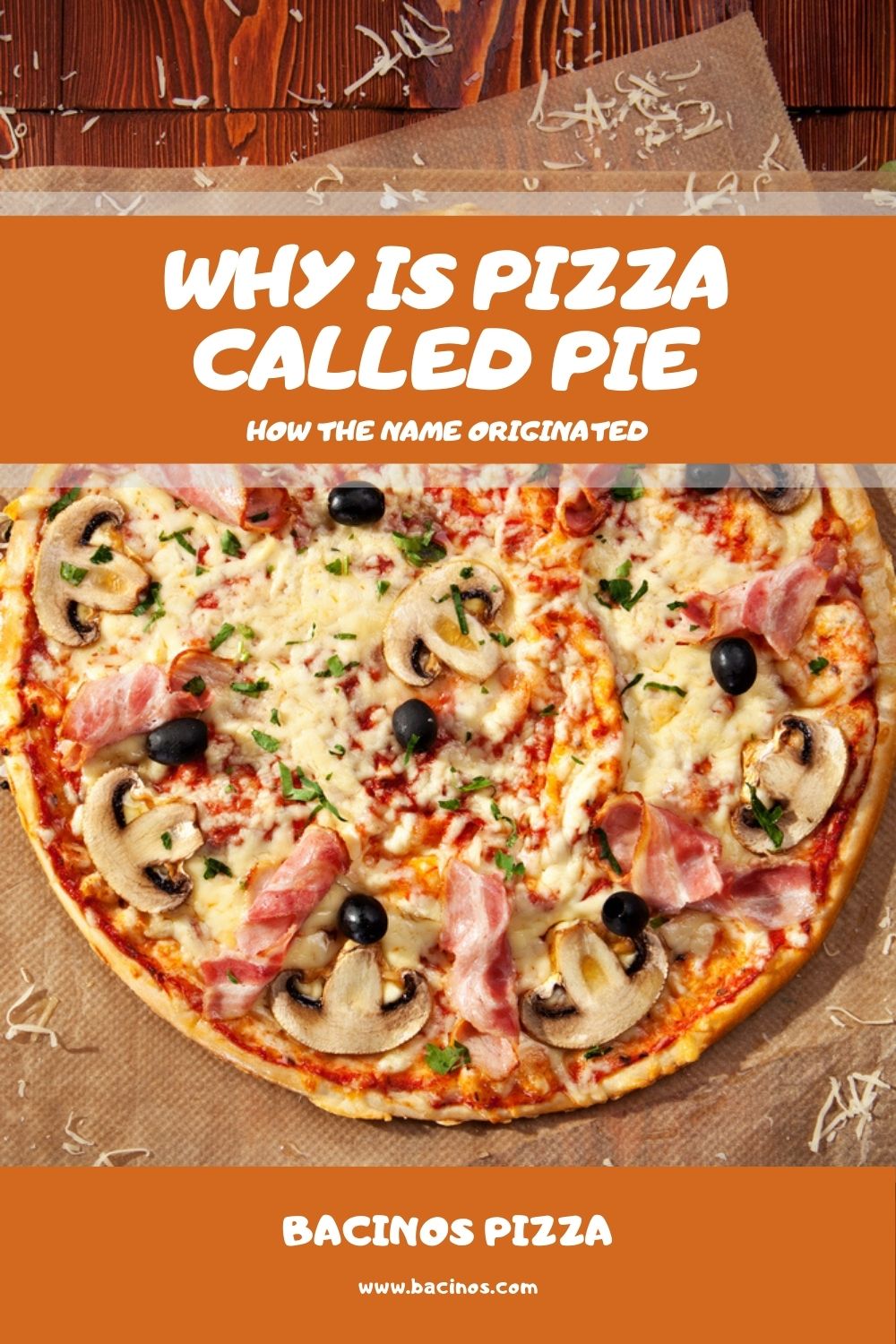 As I walk out of the restaurant, the question still lingers in my mind, “Why is pizza called pie.” I am a big fan of apple pie, chocolate cream, and cherry pie. The shepherd’s pie is not anywhere close to my favorite dishes. However, images of pie keep flashing in my brain at the mention of pie.

I am certain that you must have found yourself in a similar situation trying to figure out how pizza adopted the name pie. Well, keep reading this article helps to demystify why some people, especially in America, call pizza a pie.

How the Name Originated? 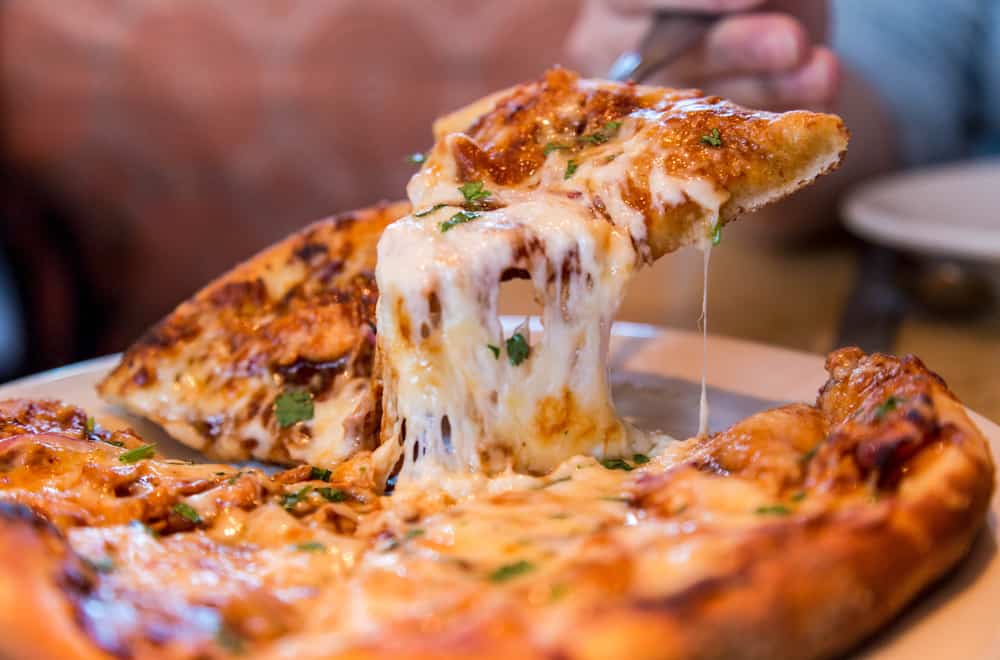 Gennaro Lombardi is an iconic figure who introduced pizza in New York. The Italian migrant sold tomato pies over the lunch hour in his grocery store in Manhattan from 1897. In 1905 he acquired a license to start a restaurant, which became the first pizzeria in America. The joint was very popular at lunch hour and prompted other entrepreneurs to begin the pizza business.

An article dated 6th December 1903 by the New-York Tribune described the pizza as an Italian pie. It narrates how an Italian has invented a pomidore or tomato pizza. Additionally, it gives a short description of how the pizza is prepared. The article is a big contributor to why many called pizza a pie.

After Lombardi’s restaurant, many Italians also opened up similar restaurants across Boston, New Jersey, and Manhattan. The popularity of pizza grew rapidly, but it was poor man’s food. Most of the consumers then were Italians.

After World War II, there was a paradigm shift. Returning veterans from Europe wanted to eat the same pizza they had across the sea. Since then, massive modifications have happened to accommodate local tastes, and pizza consumption has spread throughout America.

Today, pizza is a popular meal for everyone in America. It is a fast way to grab a bite while in traffic and to deal with busy schedules. The term pie is still in use commonly with the older generations. Many Americans will use pie as slang for pizza.

It is almost normal to hear someone order a pie and get a pizza, especially in New York City. Many people use the word pie when referring to the whole pizza instead of only a slice.

Where Pizza Get Its Name 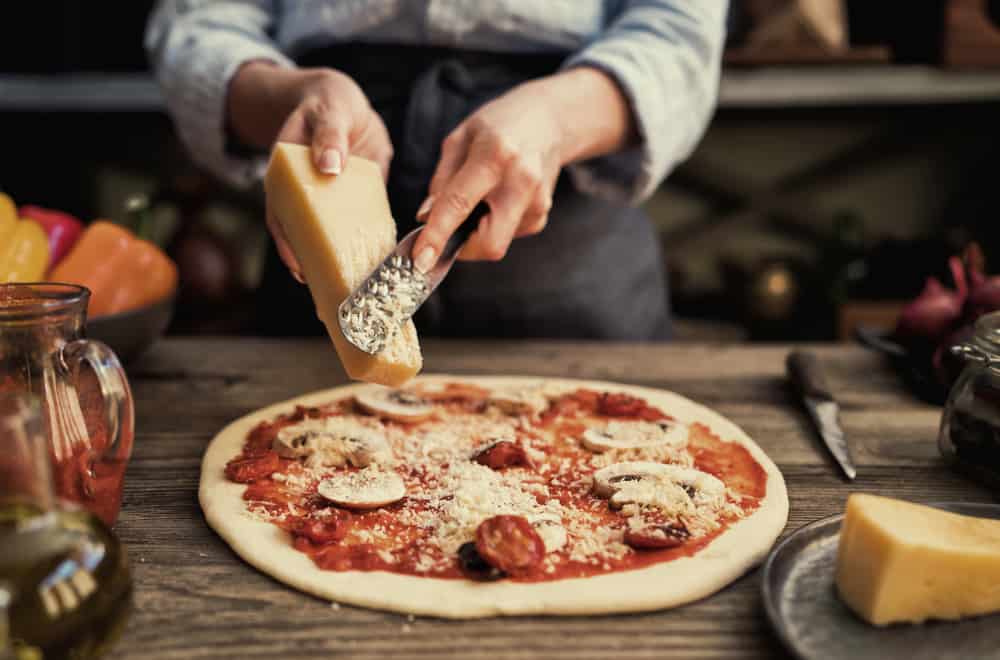 The debate has always been there for a long while whether the name pizza originated from Italy. This perception is because the name became famous during the 20th century after Italian migrants entered the United States. These migrants would make and sell pizza covered with slices of tomatoes named pomidore pizza.

The word “pizza” had records dating back to 997 AD in Gaeta, Italy. The documentation says that the bishop of the small town would receive “duodecim pizze” or twelve pizzas from a certain tenant on Christmas day and Easter Sunday.

The argument of the origin of the name still stands. The documentation reads in Latin, which is Roman. However, some theorists believe the word is originally from Italy derived from the word “point,” which changed to “pizzicare,” meaning “to pinch” or” pluck.” Others say it could have originated from “pinsa,” which is the past participle of “pinsere,” which means to pound, referring to the flattening of the dough.

On the other hand, Ancient Greek called a fermented pastry “pikte.” The word became “picta” in Latin. Other researchers argue that the name is of Lombardic origin from the word “pizzo” or “bizzo,” which means “mouthful.”

What is a Pie? 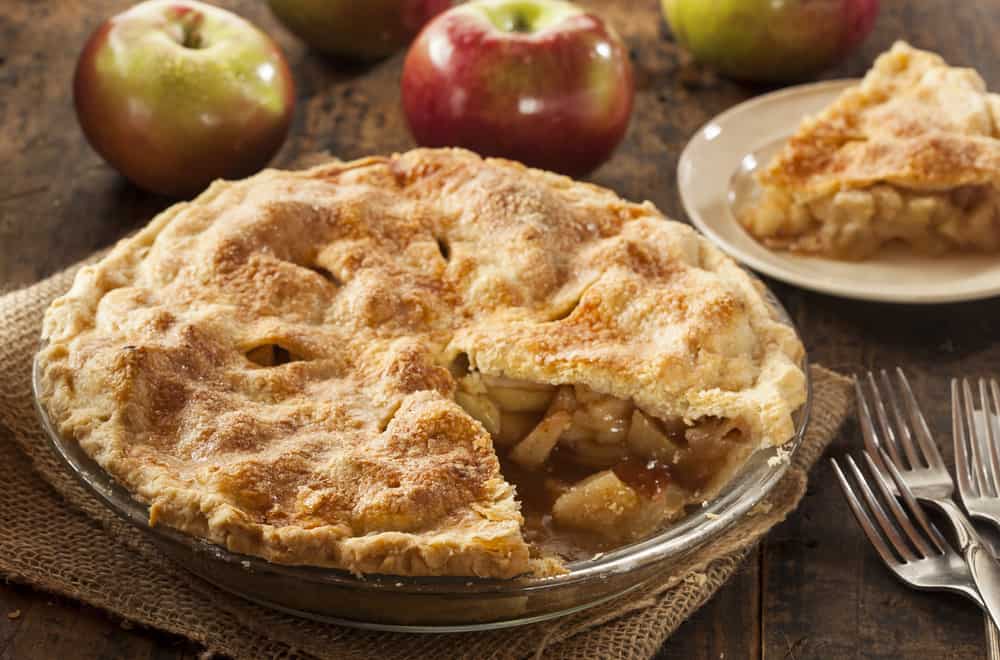 A clear understanding of a pie will help find out the similarities and differences between the two names. A pie is a meal where you fill a pastry into a shallow container and add a savory mixture to it, then let it cook till the crust is crisp. In most cases, another crust is added at the top.

Typically, a pie is about 8 inches in diameter with 2 inches in thickness. It consists of custard, a sweet fruit filling, or pastry cream. Customarily, the pie is prepared from flour, water, salt, and shortening or butter. It is worth noting that pies are only baked. Therefore, it implies that if it is fried, boiled, or steamed, it is not a pie.

The golden rule of a pie is that the pastry must be from grain, wheat, rice, cookie crumbs, or cracker. Lack of pastry disqualifies any dish from being a pie. In Europe, it is fundamental that the pie has a bottom and top crust. However, in America, only the bottom crust is the main point for a pie. The pastry must be high enough to hold the contents of the fillings.

There are many types of pie, such as chocolate cream, cherry pie, apple pie, and pumpkin pie. The apple pie is undoubtedly the most popular in America. During Thanksgiving Day, the pumpkin pie is a must-have in almost all homes in America.

An open pie is referred to as a tart. The major difference between the two is that the tart has a thicker base, and you can see the fillings from the top. On the other hand, the pie is enclosed with a thinner crust.

What is a Pizza? 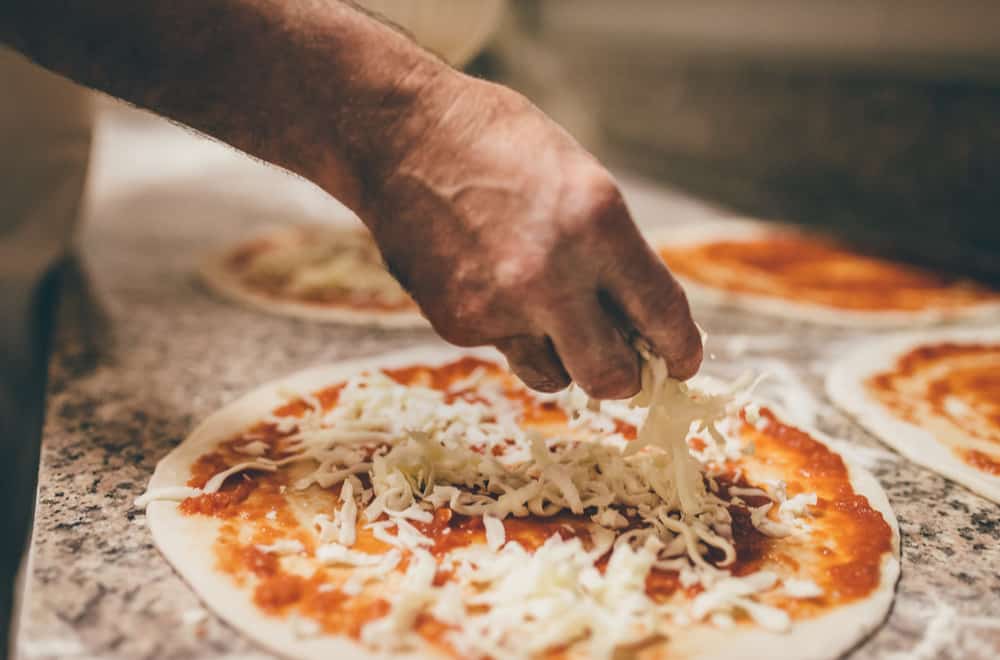 A pizza is a round flatbread made from dough with toppings of tomatoes, cheese, and other ingredients usually baked in an oven. Pizza is prepared by mixing wheat flour with yeast, warm water, mozzarella cheese, and pizza sauce. The toppings of choice are then added before placing them into the oven.

Toppings range from meats such as sausage, pepperoni, salami, bacon, pork, and chicken. You may also opt for vegetarian pizza to include toppings like mushrooms, oregano, olives, broccoli artichokes, green pepper, or spinach.

There are numerous types of pizza around the world. Different places put different fillings making it quite difficult to name the best pizza in the world. Also, different people make pizza using their recipes.

Despite the numerous techniques used in different places, the crust of the pizza is easily edible. The most popular kinds of pizza include St. Louis, California, Greek, Silian, New York-Style, Chicago, and Neapolitan pizza.

The Neapolitan pizza is probably the most ancient, with origins from Italy. The pizza dated back to the 18th century and was mostly associated with the poor along the seaside. The main variations include Margherita pizza and Marinara pizzas.

The history and origin of pizza date back to the sixth century BC. Historians’ record that the soldiers of Persians would bake flat-bread on their shields and cover it with cheese.

It was not until the 16th century when a groundbreaking discovery was made. It happened when the use of tomatoes by people of Naples on their dough. Contrary to the belief of many, they were not poisonous, and that was the beginning of what we have today as pizza. The poor people of Naples would add herbs, olive oil, and cheese to feed their families.

The bakers would make flatbreads to test the temperatures of their oven. Since they did not want to waste the flatbreads, they would sell them to the poor workers when they went for their lunch breaks. The workers would then add toppings and seasoning to the bread leading to the birth of pizza.

Raffaele Esposito, a chief chef in Naples, made three pizzas for King Umberto and his wife, Queen Margherita di Savoia. The Queen loved the pizza with the Italian flag and sent a letter to thank him. Raffaele decided to name the pizza Margherita in honor of the Queen.

According to research by Statista, the pizza industry had 78 092 restaurants in the US in 2020. Also, sales for pizza restaurants stood at $46.24 billion in the same year. 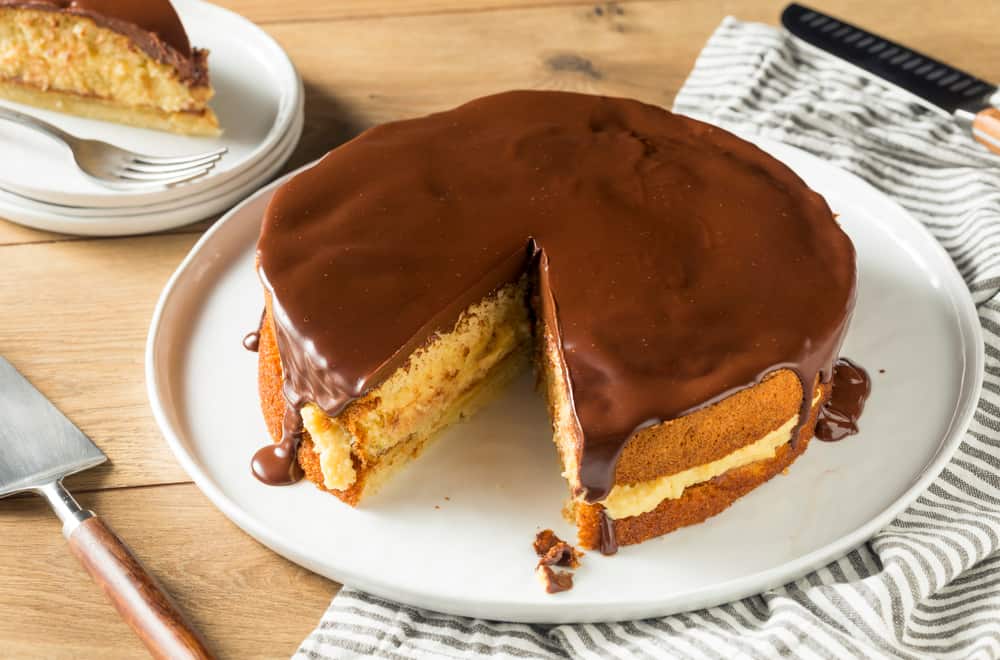 The Discovery of a carving of chicken pie recipe dating before 2000 BC is a clear indicator Egyptians ate pie.

The Ancient Greeks took the skill to a higher level by creating pastry shells in the 5th century. At that time, meat was the only kind of pie till the 16th century.  The pastry was fairly hard and not considered edible but was for storage of the fillings. The crust adopted the name “coffin” or “coffyn” that surrounded the meal.

It is in Britain that the first-ever fruit pie for Queen Elizabeth I. The English settlers in the US introduced pie since the colonial era. The meal has continued to evolve and is widely integrated throughout America.

Similarities between Pizza and Pie

Differences between Pizza and Pie

Since the time of Italian immigrants, the name pie has been used to mean pizza. It is a common phenomenon in New York where Lombardi had his first pizza shop.

Although many still refer to pizza as a pie, the two are not the same thing. The main difference is realized when making an order during which pie implies the whole pizza. 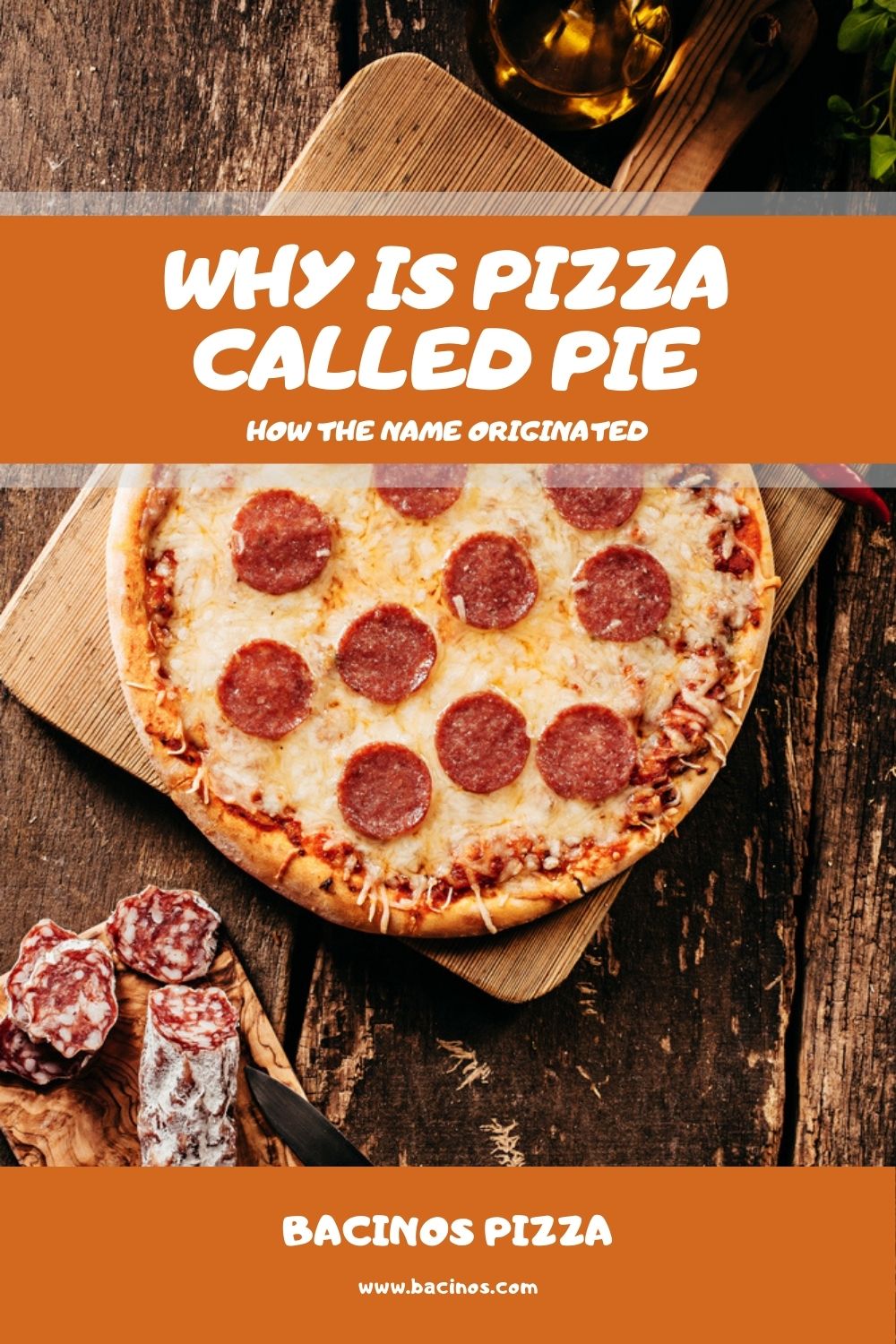