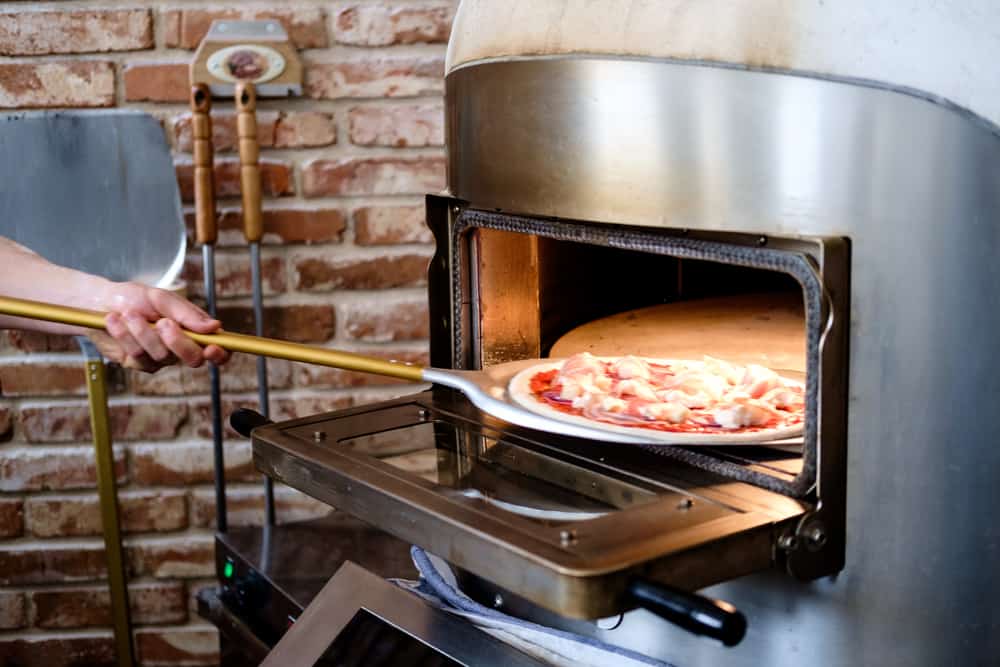 So, you’ve just bought yourself the best pizza oven and are ready to create a freshly baked and authentic pizza from home? First of all, congratulations on that worthwhile investment! Now you’re a few steps from making your pizza as delightful and crispy as the store-bought one. 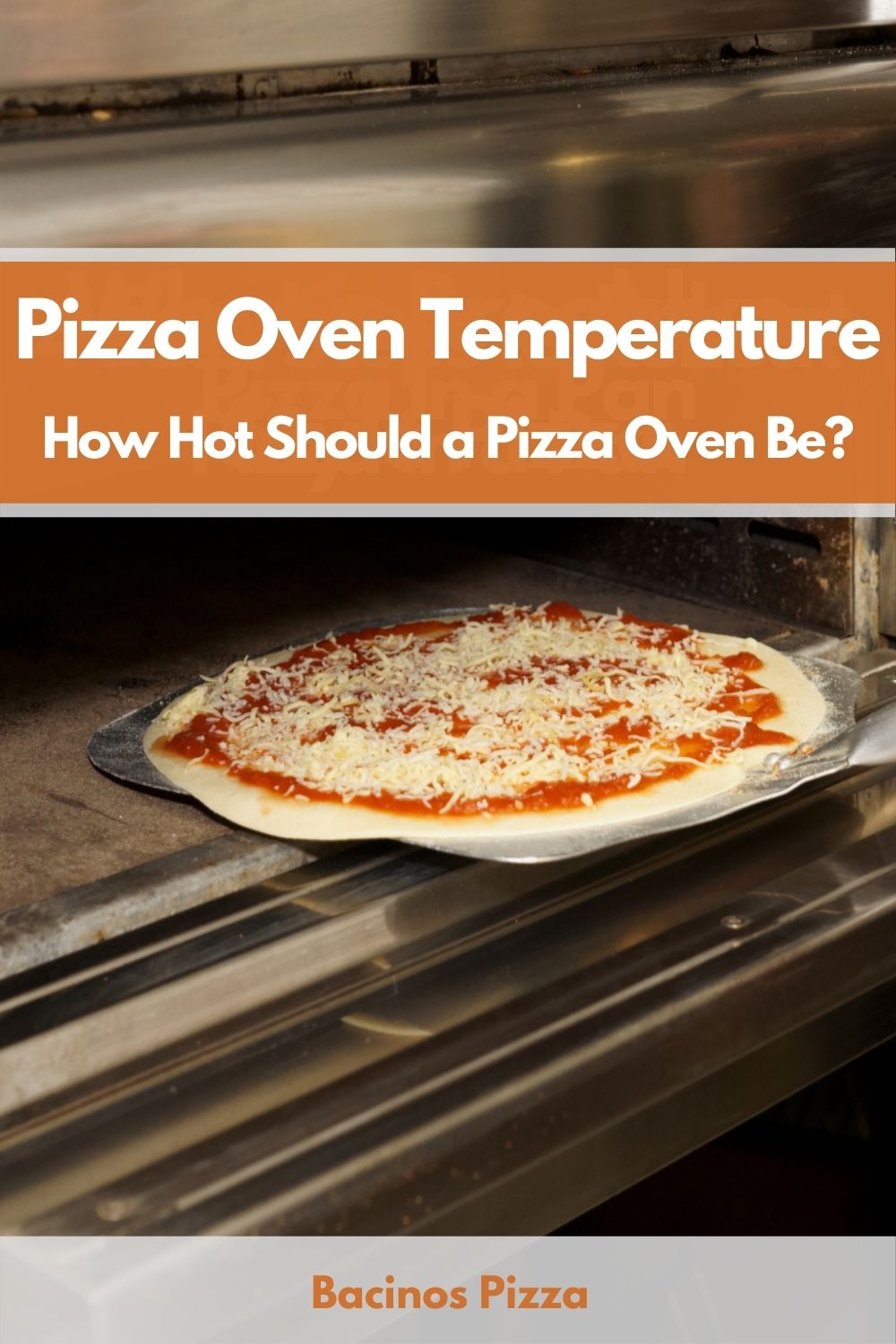 You’ll want to know that owning a pizza oven is one thing, and cooking a delicious pizza in it is another. It takes skill and finesse to make this snack, but with a few trials here and there, you’ll soon master the art.

So, what’s the right pizza oven temperature? Let’s dive right in and see how hot the pizza oven should be. 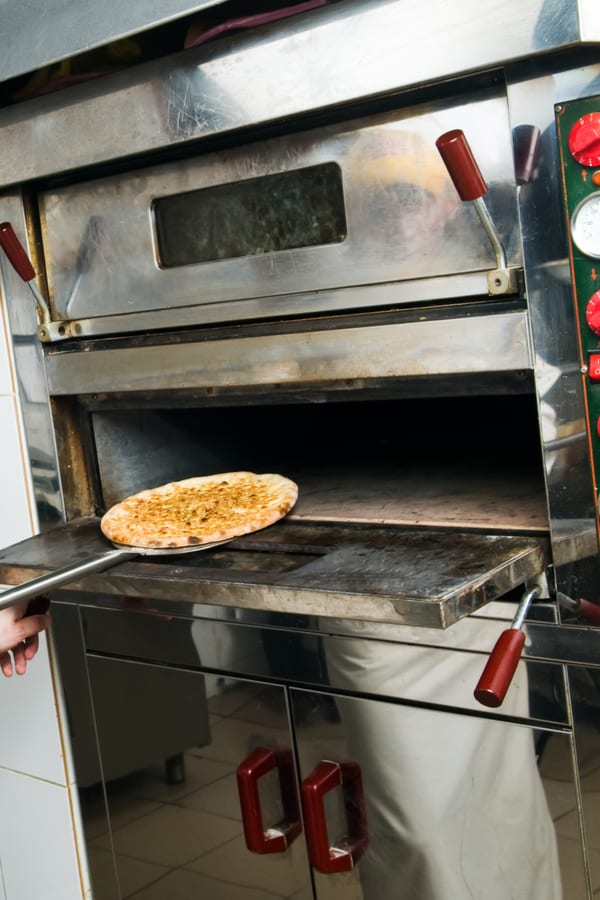 Commercial pizza ovens typically reach between 700F and 800F. In fact, you’ll be surprised to hear that a traditional wood-fired oven can cook at temperatures ranging from 850F (450C) to 900F (500C).

If using a commercial pizza oven, aim for a temperature range of between 600F (350C) and 850F (450C). I’d recommend you cook at 600F, though. This temperature is enough to produce a crisp base and perfectly melted cheese in just 90 seconds.

You’ll need to preheat the oven for around 20 minutes before you start cooking. A hot pizza oven allows the crust to get the perfect crispy texture without being dry or brittle. Remember, one of the easiest ways to tell a great pizza is the crust.

The good thing about commercial pizza ovens is that there’s little or no temperature variation between types of pizza. Maintaining the temperature above 600F allows you to make all sorts of pizza crusts, from Neapolitan to New York-style and anything in between. 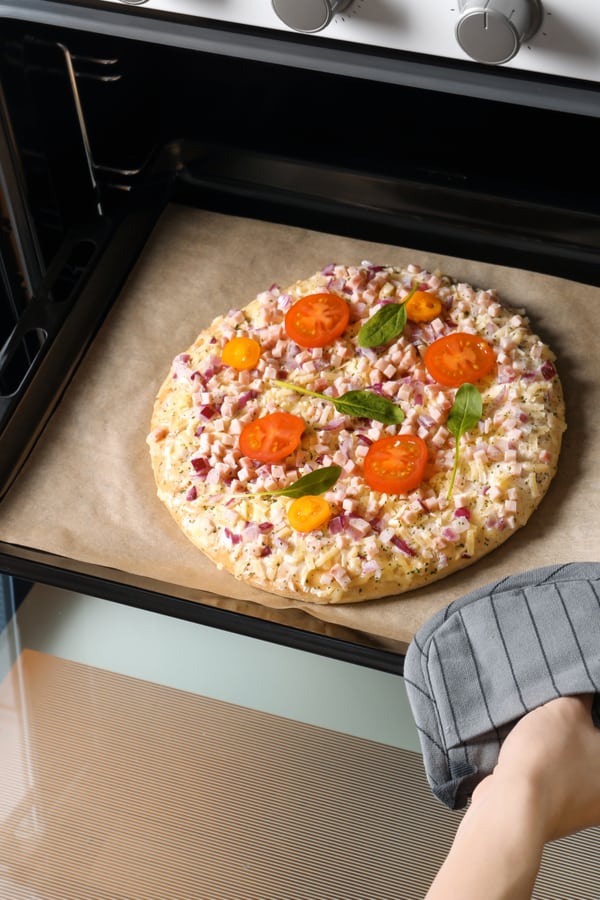 An average household oven will only get up to an optimum temperature of 500F or 250C. However, you shouldn’t be surprised to see other home ovens push the dial beyond that territory. Some can even get as hot as 600F, so don’t be dismayed if a traditional wood-burning pizza oven is out of reach!

Nonetheless, there are a few things to keep in mind when using a household oven for cooking pizza. Usually, the thickness of your crust will determine the optimal temperature to use. A thick crust requires lower temperatures, while a thin crust requires higher.

So, if you’re cooking a homemade pizza with a thicker crust, you’ll need to set the temperature to 430F (220C). A good example of a thick-crust pizza is a deep-dish pizza. Meanwhile, 260F (500C) temperature is suitable for baking a thinner crust pizza, such as Neapolitan and New York-style pizza.

Of course, I understand that some ovens may overheat at such high temperatures. Therefore, if your pizza oven has a fan, be sure to turn it on. A running fan improves the airflow inside the oven and increases the overall temperature – without causing smoke alarms!

Impact of a Hot Oven on Pizza 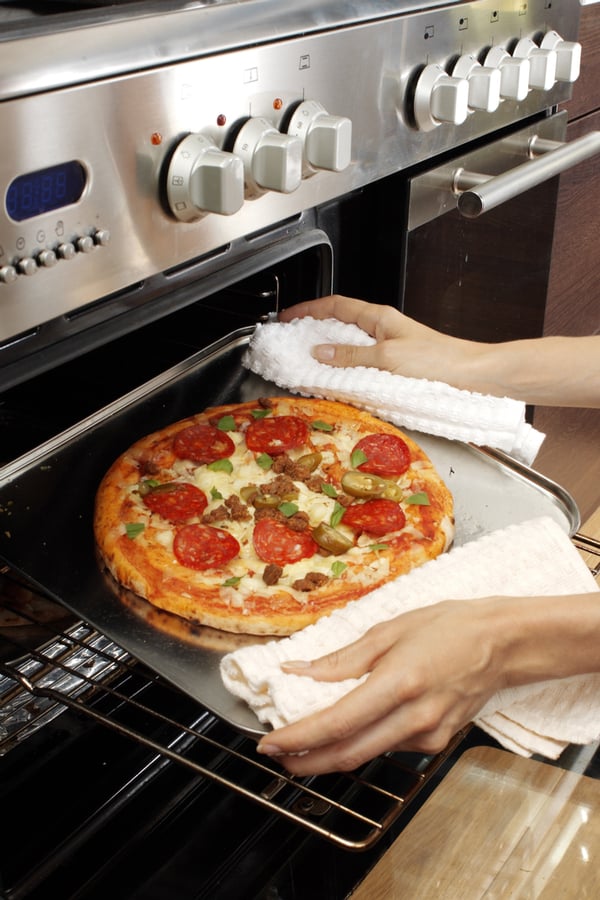 Remember, baking in a cool oven isn’t recommended because the cheese may not melt completely. When that happens, your pizza may have cold spots on the top and may have a not-so-good taste. Bake at a high oven temperature so that the cheese can melt evenly over the entire pizza.

A high oven temperature also enables the crust to get the perfect texture. Ensure the oven isn’t overly hot as the crust will burn. Just maintain the recommended temperature range to create a perfectly cooked crust.

In addition to the pizza’s taste and quality, a high temperature allows you to cook the pizza in a matter of minutes. With a hot oven, it’s possible to make several pizzas in a given time. This is great especially if you’re running a busy pizzeria or restaurant.

I bet you don’t want to keep your customers waiting, do you? Therefore, keep your oven hot to ensure a quick turnaround time. Generally speaking, the hotter the oven is, the quicker the cooking process. This also increases the odds of getting a delicious and fresh pie, more so if you’ve mastered the art of baking pizza in an oven. 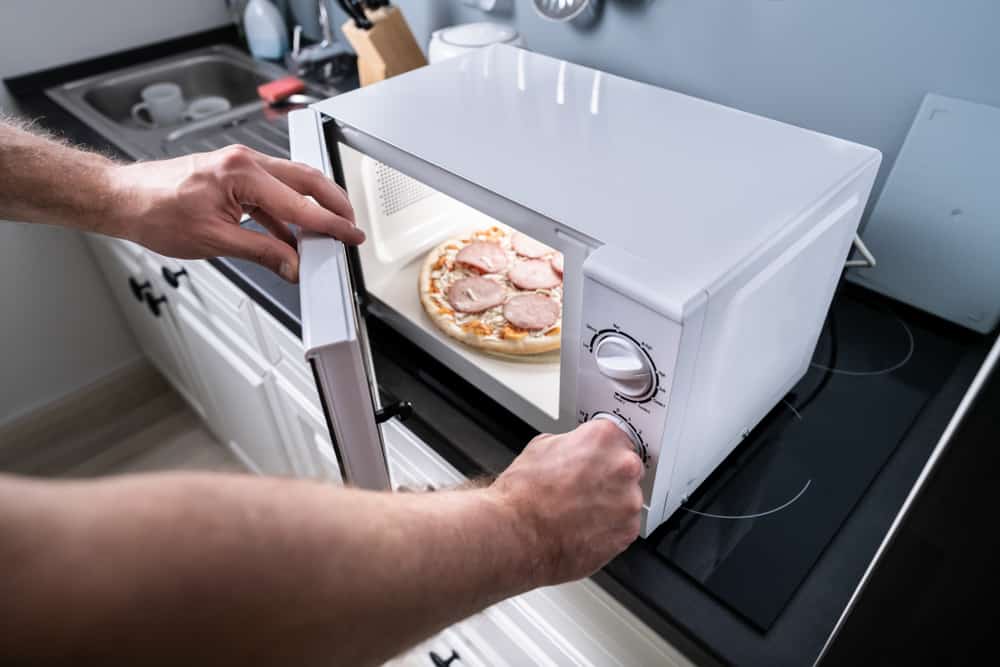 Now, let’s have a look at some of the things you need to keep in mind regarding pizza ovens and their temperatures.

Idyllically, it all boils down to what you’re using. Let’s assume it’s a home-based oven. For this one, the recommended temperatures range from 400F to 450 F (or 200 to 230 C). You’ll want to aim for 430F to turn out a perfect crust with nicely melted cheese.

It would help if you preheated the oven before placing the dough inside the oven. The length of time to preheat the home oven varies by the type of oven you’re using. Usually, it should take around 1-2 hours for the oven to hold some heat.

For those using a commercial pizza oven, the recommended temperatures are 600F to 850F (or 350C to 450C). It would help if you aimed for 600F as this is the perfect spot to cook the pizza in about 90 seconds. As always, preheating the oven is a must.

Commercial pizza ovens take about 20 minutes to heat. However, be careful not to make the oven too hot. It would help if you considered the weather’s temperature when preheating the commercial pizza oven – particularly the wood-fired outdoor oven.

If the day is too hot, you can turn the temp a little bit lower. And if it’s during winter, you can take the temp a notch higher. Just make sure you don’t burn the pizza.

How Do I Know When It Is Ready to Place the Dough Inside an Oven? 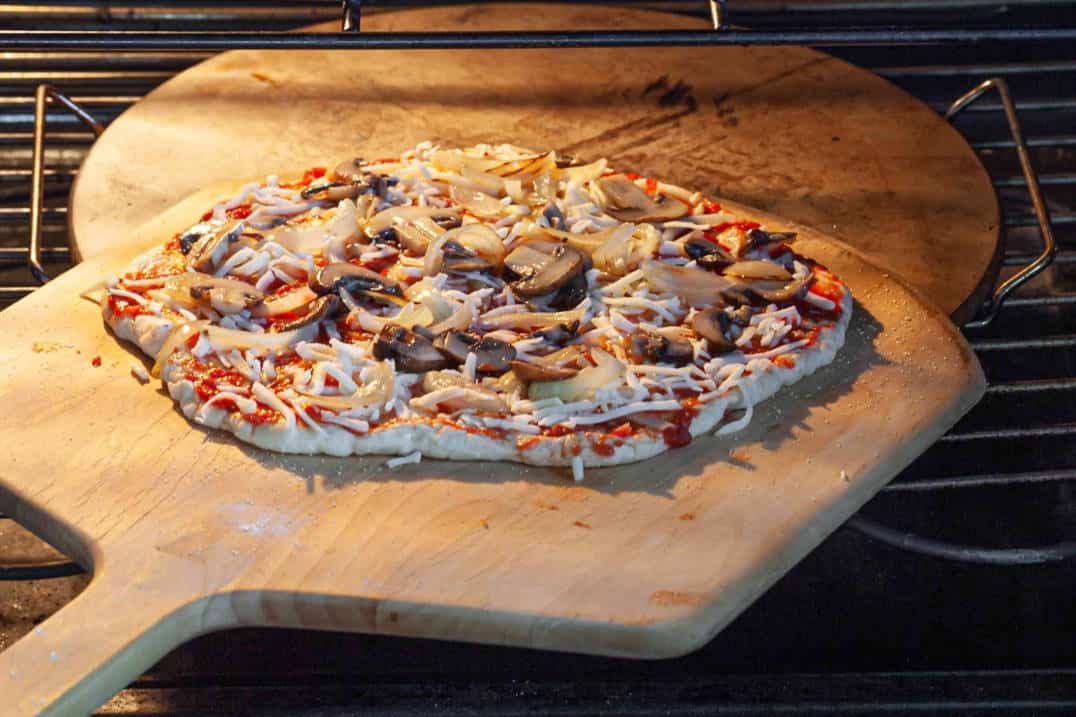 Set the oven to the required temperature. That’s all you need. However, the problem comes when you place the pizza too early, and it doesn’t brown nicely. Or, you may place it too late, and it burns the crust.

The trick is to throw in a small portion of the pizza dough and let it cook. The first pizza usually gets too crunchy, and you wouldn’t want the first pizza to be a large portion. It’s best to try it with smaller portions before continuing with your cooking.

What Is Pizza Stone and Does It Affect Cooking/Baking Temperature?

Do you need a pizza stone to bake pizza? Well, the answer is simple, NO.

You don’t really need a pizza stone. But, without a doubt, it does make your pizza has a better taste. Both the base and crust become crispier.

Does the pizza stone affect your oven temp? Yes, it does. You just need to preheat the oven much longer than without the stone. An additional 10 minutes of preheating is recommended when using a pizza stone.

Should I Close the Oven Door When Cooking Pizza? 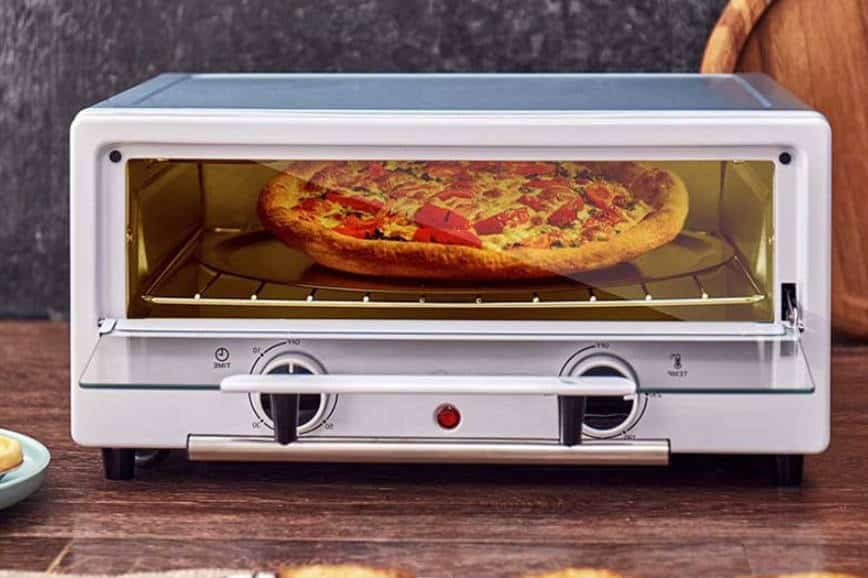 While the door helps retain heat inside the oven, it also restricts oxygen from getting into the oven. This can affect how the pizza browns.

It’s best to close the door when preheating the oven. Once preheated to the required temperature, leave the door open for like a minute before placing the first pizza.

You can then close the door for five more minutes before opening it halfway to monitor the pizza’s progress.

Of course, you can leave the door closed until the pizza is well cooked, but I prefer monitoring the pizza every often.

Leaving the door partially open also lets out the scent, which gives you an idea of its progress.

How Do I Time Homemade Pizza? How Long Should I Cook the Pizza?

It isn’t easy being specific with the exact minutes. But I’d recommend 6 to 10 minutes. Simply preheat the oven to the required temperatures. And then cook the pizza for the recommended minutes.

While cooking, make sure you stay close to the oven as you check its progress. You don’t want to leave the pizza baking only to come back and find it burned.

Also, avoid opening the door too much. You can leave it partially opened. And if you close it, make sure the intervals you check the oven are short.

But I have the oven window? Shouldn’t I leave the door closed? Yeah, I know that’s the expected consensus, but it’s also vital to leave the door open to let in oxygen.

Obviously, opening the door drops the temperature and may cause delay. Still, it’s best to allow some oxygen into the oven to have the pizza brown slowly and have a better taste.

Is It Okay to Use Baking Tray When Cooking Pizza?

While it’s best to use the pizza stone for cooking the pizza, a baking tray is an excellent alternative. My recommendation is to use the back rather than the front.

Turning the tray upside down gives you the ease to remove the pizza once done. The back is also thicker, which is perfect for the pizza. It leaves the crust crispier than when cooked using the front part of the tray.

Remember to leave the tray inside the oven when preheating. Basically, the oven tray is like a makeshift pizza stone.

When it comes to pizza oven temperatures, you want to make sure you get things right.

You may mess up with the pizza ingredients (which I don’t condone either), but it’s worse if the temperature isn’t right – because you can burn the entire pizza!

For a home-based pizza oven, it’s best to preheat to 430F temperatures. And if using a pizza stone, you can turn that a notch higher to about 600F, or simply preheat the oven longer for better results! 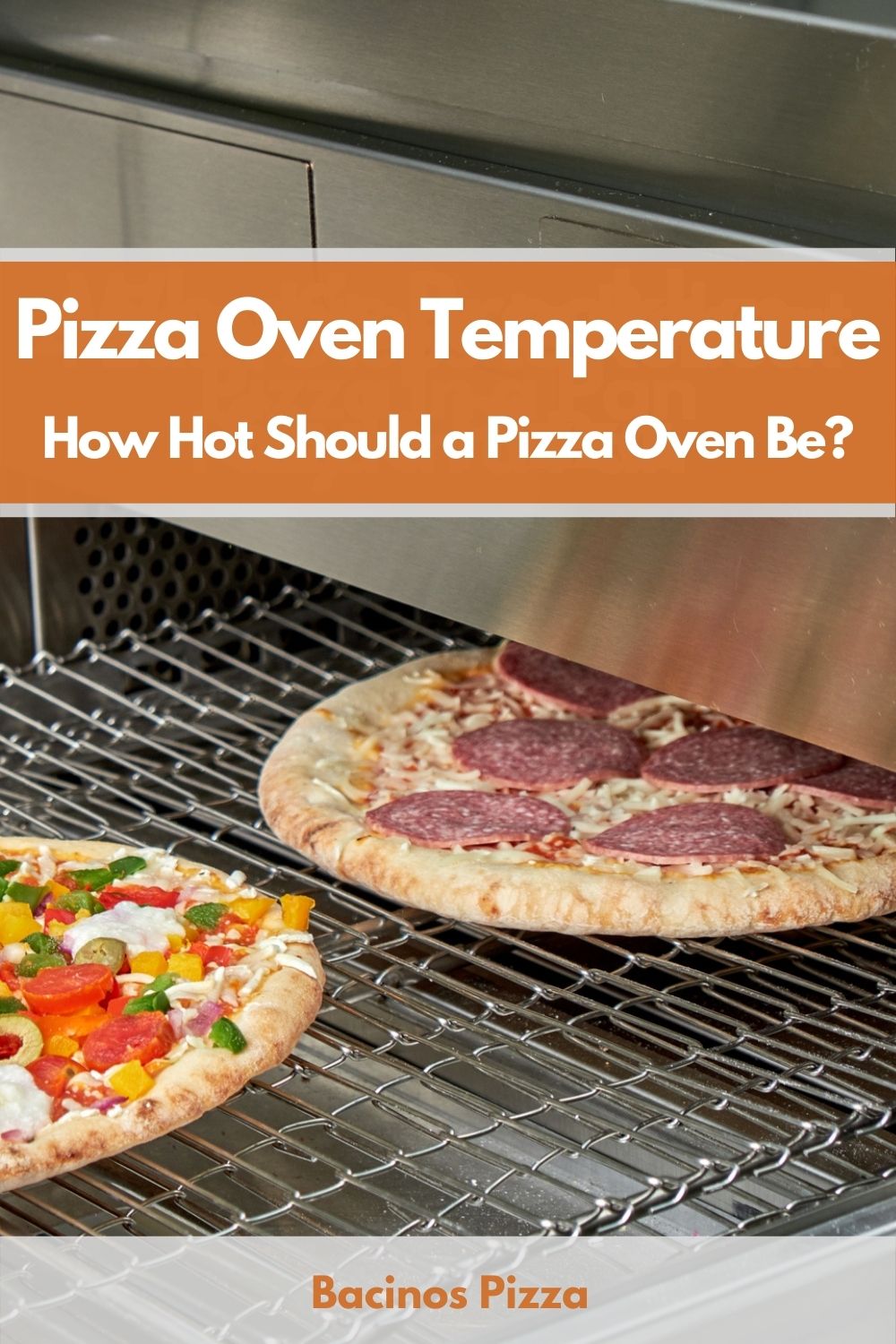 1 thought on “Pizza Oven Temperature: How Hot Should a Pizza Oven Be?”