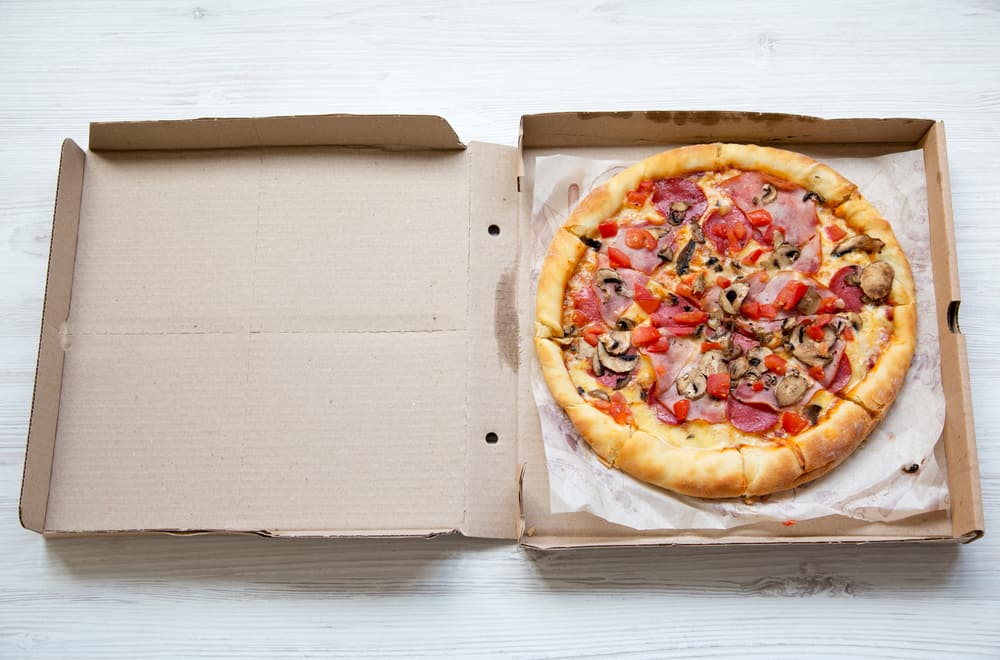 Reheating a box full of cold pizza is a struggle for the average pizza lover out here. There is this internal war of cutting corners or going through the normal laid down rules for reheating pizza.

Do I remove the slices and warm them separately? Do I just throw-in the whole box of pizza and save myself time and energy? 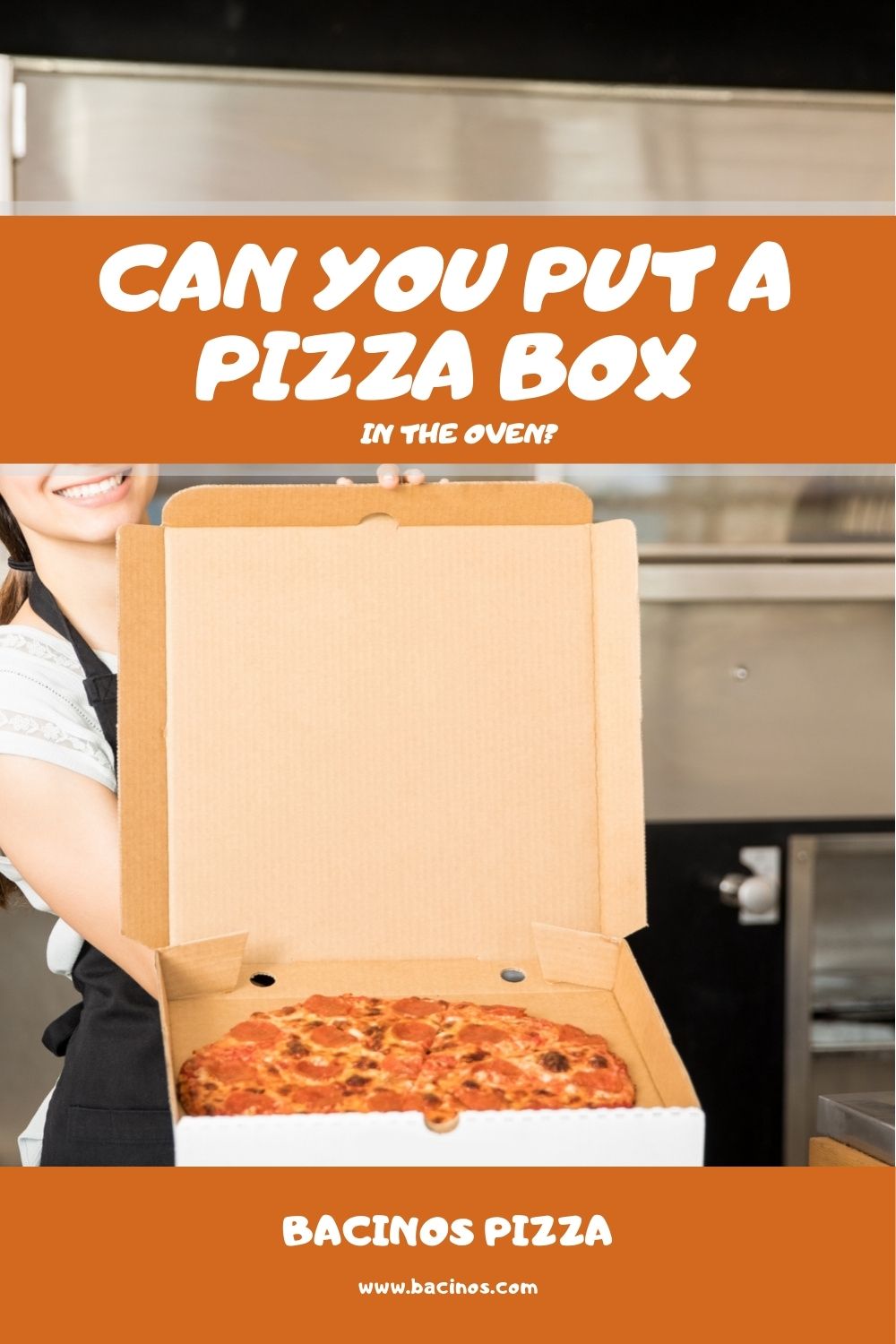 This article will give you in-depth answers on reheating a pizza box in the oven.

An average pizza box is made up of paper or cardboard which is thick enough to carry the 6 to 12 pizza slices and also prevent the leaking of cheese and oil.

It is generally durable, but is this pizza box durable enough for a hot oven?

Can I put a pizza box in the oven? 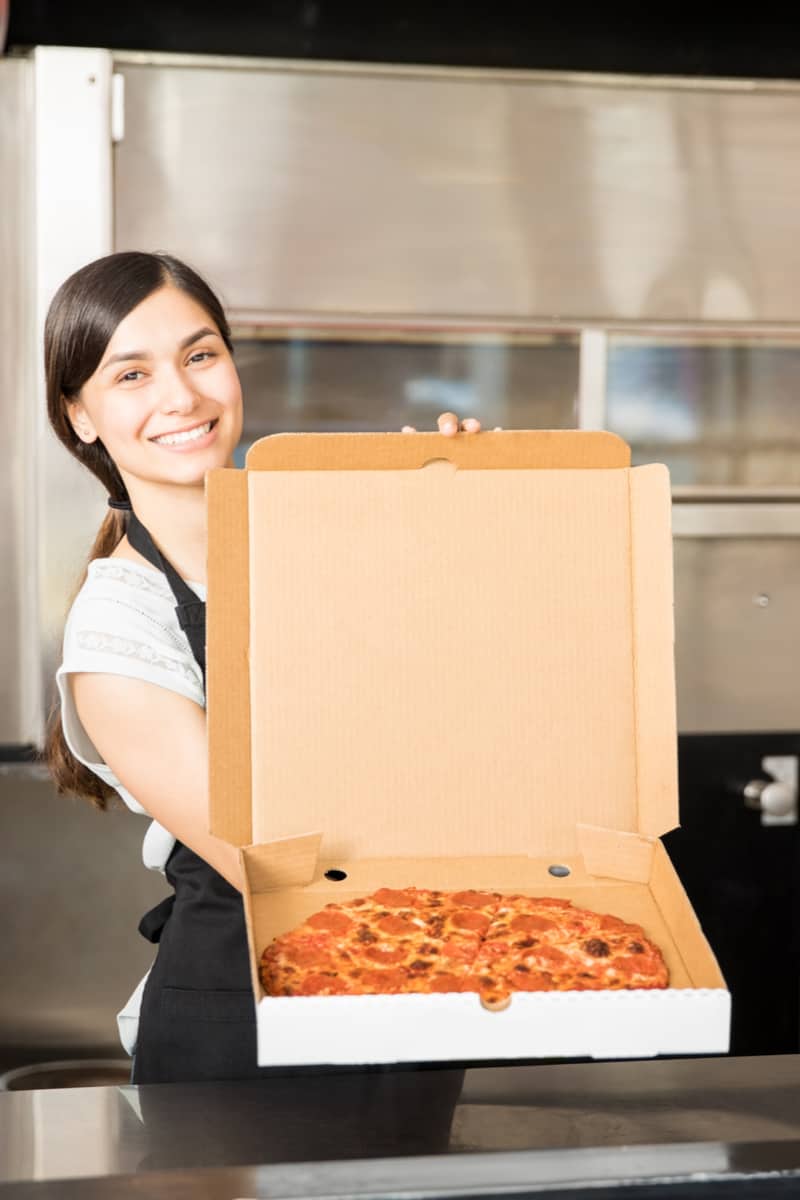 No, you cannot put the whole pizza box into the oven.

This is because the highest temperature a pizza box can allow without setting itself on fire is 400°F.

Anything higher than this set on the oven will require the immediate assistance of firefighters. The whole box, including the pizza, would catch fire and cause you a lot of damages.

But, what if you set it to a lower temperature, is it still safe to do so? It is not safe to do so as several minute actions are going on that may be dangerous to your health.

What makes up a pizza box? 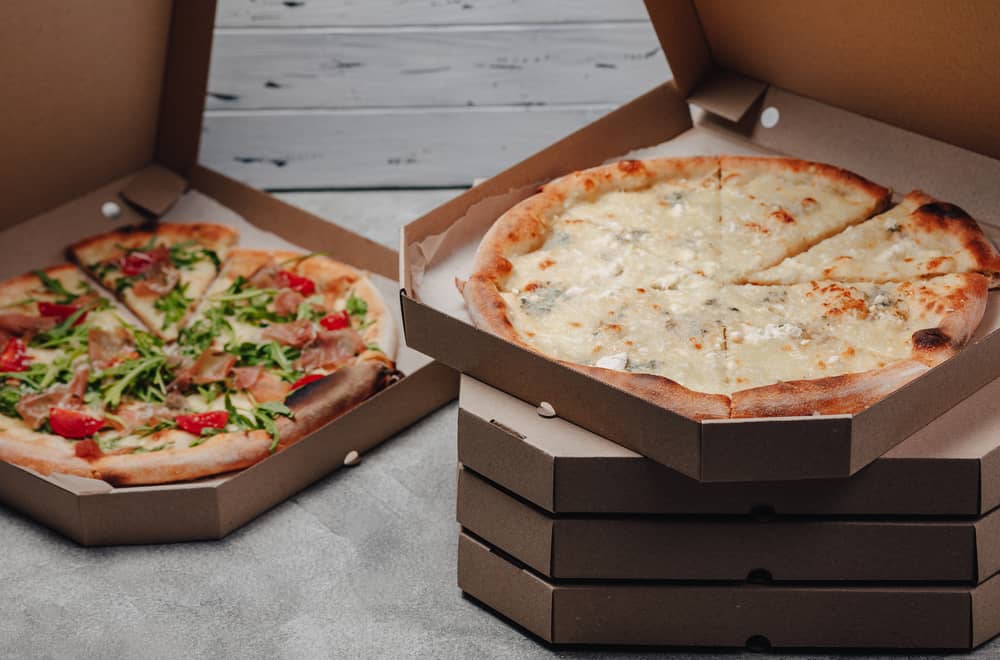 A normal pizza box is made up of corrugated cardboard, which is made up of three layers of impressed boards glued together designed to incubate heat and also to solve the soggy problem with holes for a constant flow of air into and out of the box, reducing the chances of contamination.

The box is then printed with inks and designs. The square box is designed for easy transportation as humans are more inclined to transport square boxes easily than circle objects. Food & City provides more information about the pizza box.

Is it safe to put the entire box into an oven? 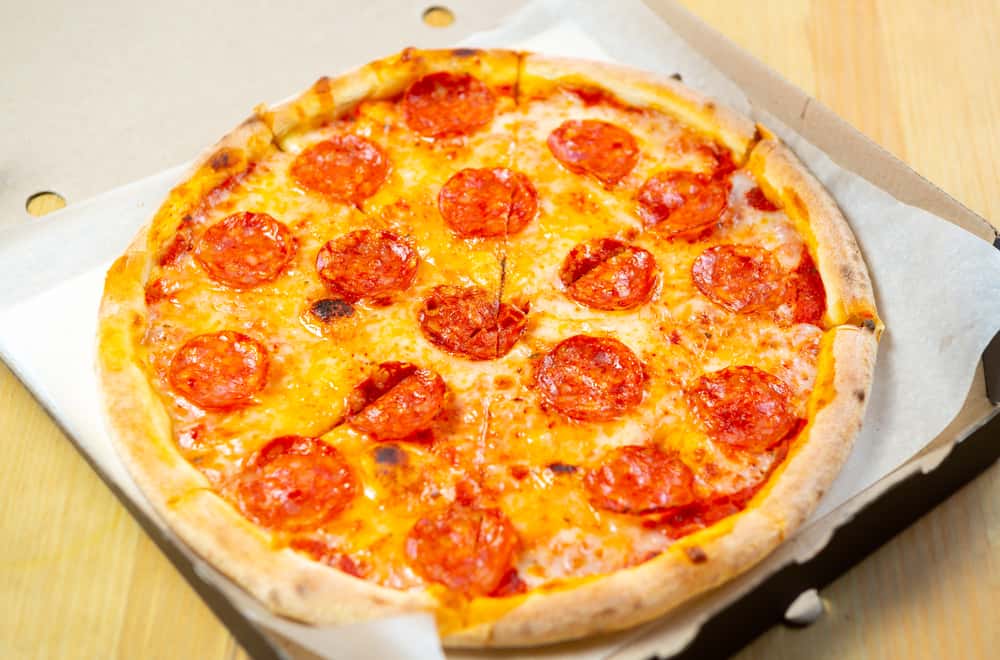 Because it fits doesn’t mean it should suffice. A pizza box has an anti-grease layer that is nearest to the pizza and this layer is susceptible to disintegrate upon heating.

These chemicals will then find themselves in your food which may then cause you health issues. The designs and inks chemicals may also melt when heated which leech itself into your pizza altering your food taste and ruining your pizza.

The pizza cardboard itself does not combust when placed under high heat. The combustion is caused by animal oil or vegetable oil that has carbon in it.

Oils like cooking oil, soybean oil, and margarine combust when they come in contact with rags, paper, or cardboard.

This is another reason to avoid heating pizza boxes in the oven even at certain low temperatures as the oils in the pizza can cause combustion.

Is it safe to heat a pizza box under low temperatures? 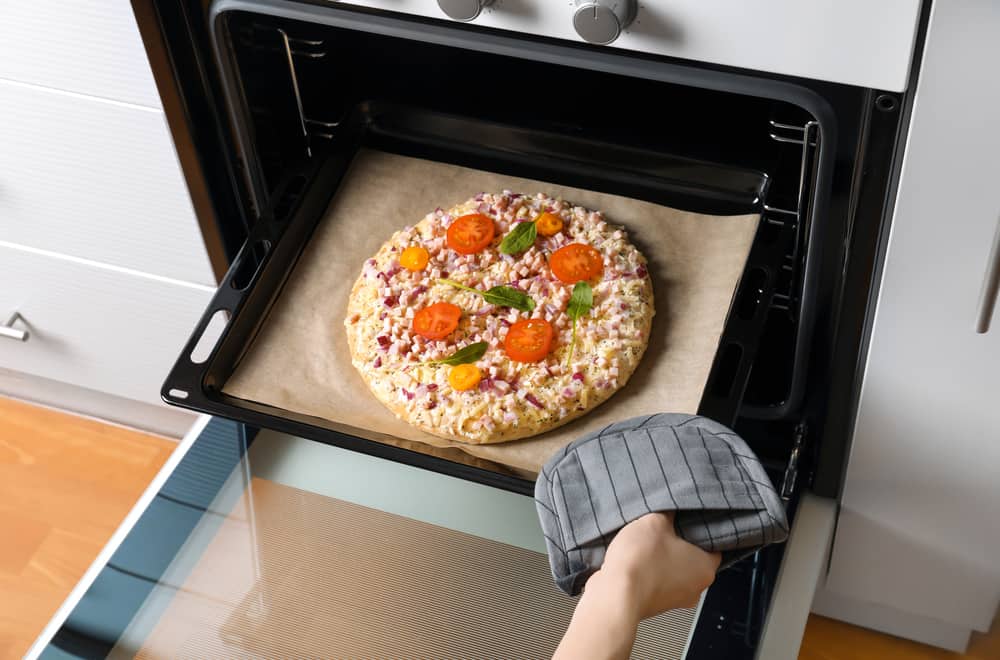 Preheat your oven to a degree ranging from 240°F-350°F for 5 to 10 minutes. Once it’s high enough reduce the temperature to around 200°F and put it in the pizza box containing pizza.

Popular pizza bar, Basil Pizzas Bar, recommends as low as 170°F. Ensure you stay with it as you may need to increase or decrease the temperature at specific times.

Leave the box for 10 to 15 minutes and sometimes open the pizza to check the surface. If the cheese becomes bubbly, this shows it is heating properly. Remove when the edges start browning up and serve.

This method is not generally safe as some chemicals might have seeped through into your pizza, but if you must use the cardboard method, use this direction above.

Can you put cardboard wrapped in foil in the oven?

This is also similar to putting the bare cardboard inside the oven. If you assume wrapping the aluminum foil around the cardboard will prevent burning, then you are wrong!

The aluminum is also subdued to heat permeability. This is even more dangerous than putting the cardboard alone. At a very high temperature, the cardboard will smoke up and cause a fire inferno.

But frozen pizzas come with cardboards, doesn’t that make it safe? 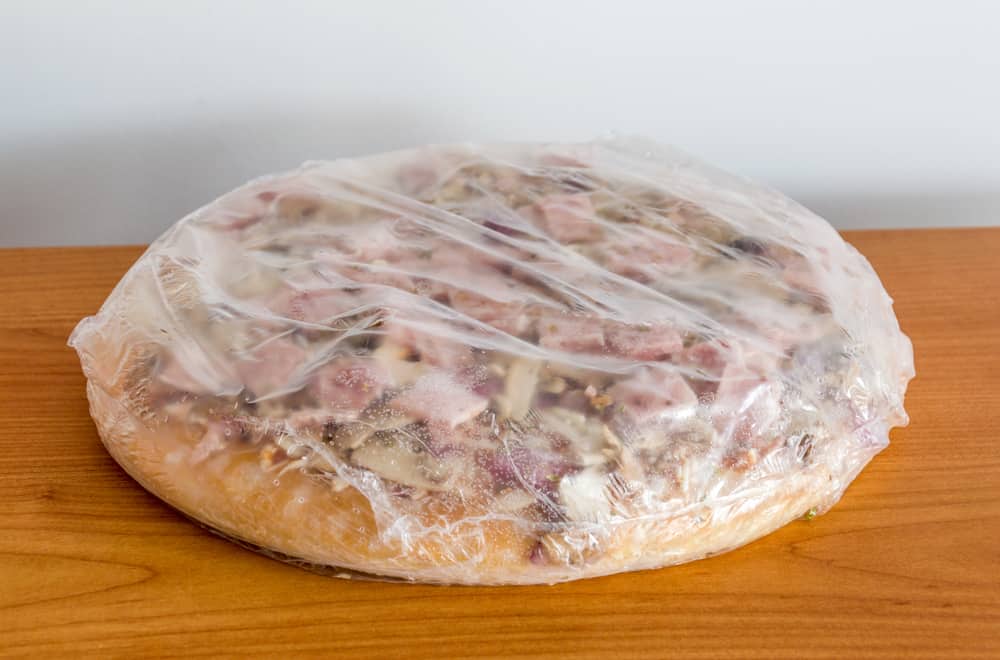 The essence of the cardboard is for packaging purposes and to prevent the smashing of the pizza on it’s way to freezing. The cardboard is also used for moving pizza onto and off the cooking rack. Wiki How shows other methods of cooking frozen pizza.

Why is it not recommended to put a pizza box in the oven? 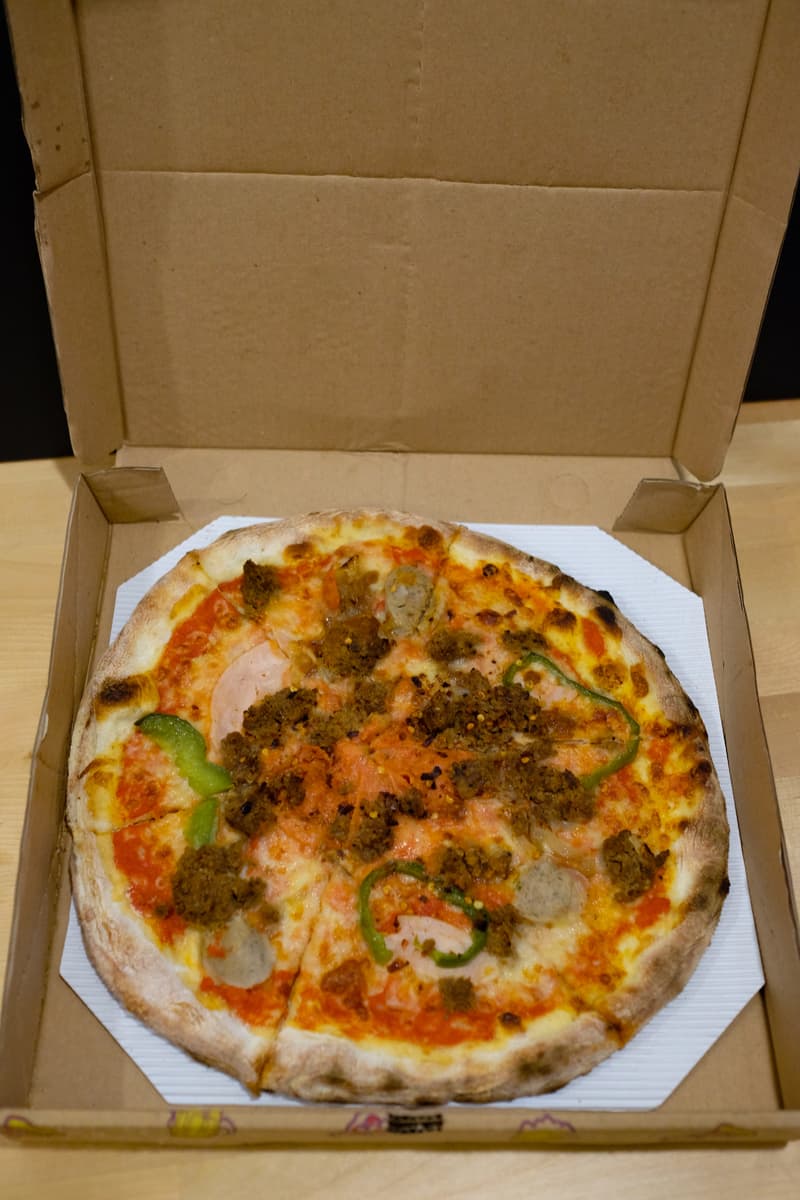 Other pizza bedding alternatives serve better use than cardboard. These alternatives are safe to use and are also human-friendly. [26 DIY Pizza Box Solar Oven Ideas]

What other cardboard alternatives can I use when heating my pizza?

Several cardboard alternatives are safe for cooking or heat resistant and they include;

Preheat the oven to a temperature of 400°F. After removing your pizza from the box, place around a film of aluminum foil and carefully arrange the pizza slices leaving a considerable amount of space in between.

Set it in the oven rack and heat. Aluminum foil is safer than cardboard as it is not flammable, no matter the temperature the oven is set to. This YouTube Video shows more information on the use of aluminum foil in a convection oven.

The aluminum method is believed to keep your pizza hot for more than 3 hours because it traps heat for that long.

The advantage of the aluminum foil is that it is easily accessible and far cheaper, but its downside is it could dry out your pizza, but that doesn’t mean the taste will be different because of a little dryness.

Pizza stones are different from baking stones, they are flat slabs of stones or ceramic that absorb heat and directly transfer them evenly onto the cold pizza. Pizza stones are far better than cardboard or aluminum foils.

They are safer to use and can be reused several times compared to the foil. Since they are made of stones or ceramics, they are inflammable. This YouTube Video shows you how to properly heat a pizza with a pizza stone.

The pizza stone requires less heat than the aluminum foil. It requires a temperature of 200°F to 250°F and a time ranging from 10 to 20 minutes.

Due to the porosity of pizza stones, your pizza is heated evenly leaving a well heated and soggy-free pizza. The pizza stone retains heat for a long period, this is why it is advised to leave your pizza on the stone.

The downside of the stone is it takes a while to heat up and it is more expensive to get, unlike the far cheaper aluminum foil. It is also more liable to break, especially pizza stones made of ceramics and stone, a lot of people do not have time for such, hence the preference for the aluminum method.

There are other cooking methods you can  use in heating pizza aside from the oven and they include the skillet, the toaster oven, the microwave, and the air fryer.

Heating a pizza inside an oven is not advised but if you are to do so, lower the temperature and watch the pizza intently as it is one degree away from burning down your whole house.

Remove any other packaging material which may include metals or plastics that may cause an explosion in the oven. Their working mechanism is similar to the flooring of wooden ovens.

Invest in other cooking options and methods or simply remove the pizza from the carton and heat as usual to avoid unfortunate events. 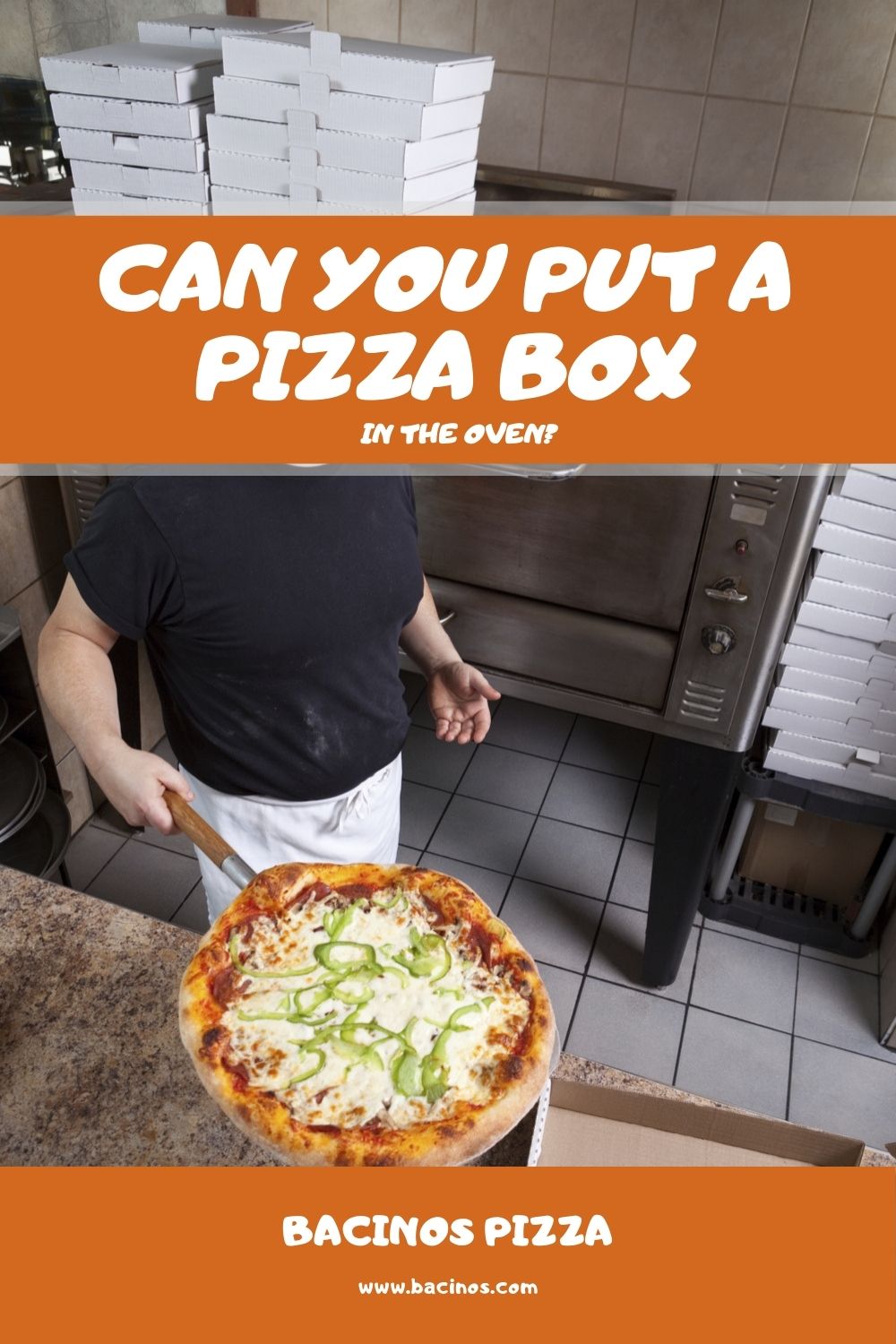